My family car is an SUB and I love it

On my new "sport utility bicycle" I can cart groceries, take my kids shopping, haul a barbecue grill and make a margarita. 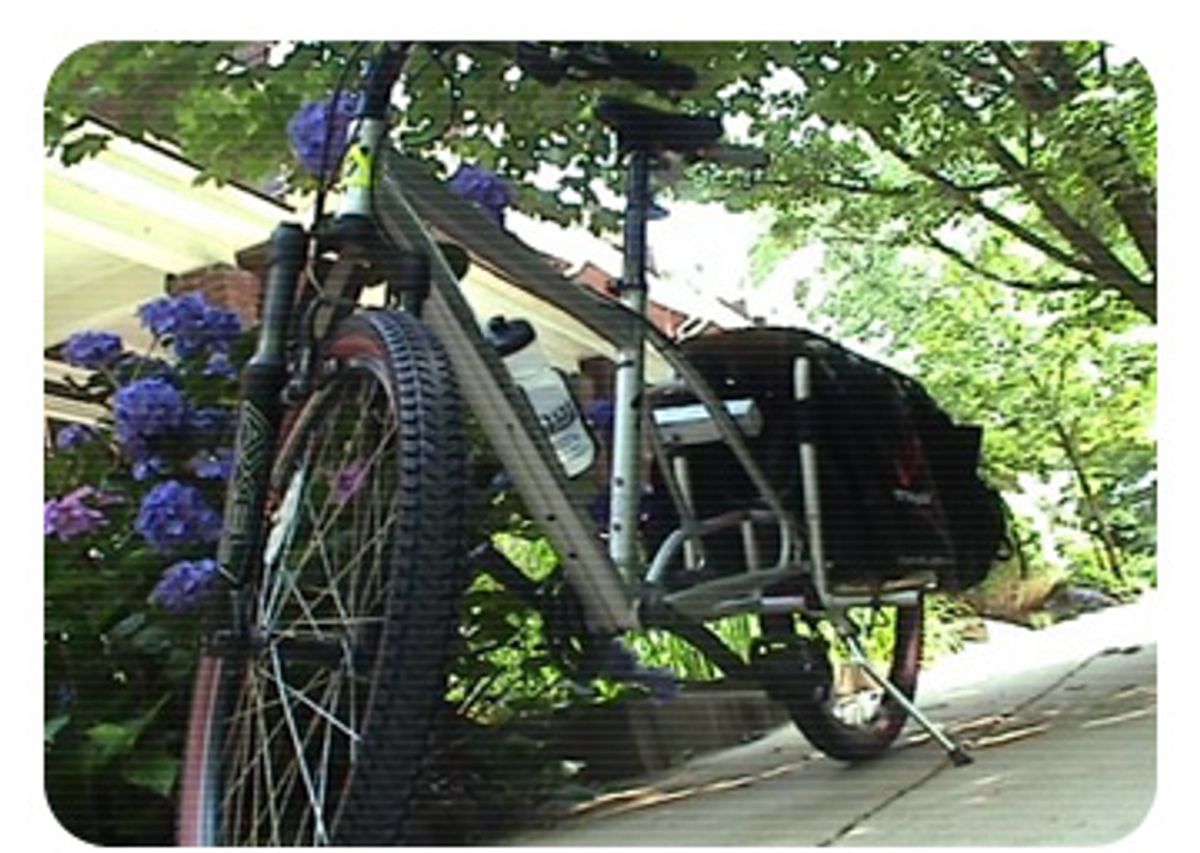 The apocalypse seems inevitable when you're stuck in summer traffic. Sitting in a long line of idling cars, shimmering in waves of heat rising off the pavement, you think about how every year it gets hotter, and the traffic gets worse and pumps tons more carbon dioxide into the atmosphere. You pull yourself up by the steering wheel to see ahead. Your thighs stick with sweat to the driver's seat. You are beyond frustration and feel an existential loathing closer to panic. You are part of the global warming problem. And now you're going to be late for work.

Three years ago, I opted out. Since then I've been commuting four miles to my Washington, D.C., office by bicycle just about every day, rain or shine, in an effort to help save the environment and myself along with it. Of course, there are obvious limitations to a bicycle. What about when you need to pick up groceries for a family of four? And unless your kid is Peter Pan, he can't just fly over traffic to get to school. Wouldn't it be great to commute and run those entire errands by bike?

Bikes designed to haul freight or passengers have been around for a long time. Picture the massive rickshaw or those bikes you see pulling a brightly colored trailer, two kids nestled in the back, helmets bobbing. It's not exactly handy, however, to pull a trailer behind your bike, and not many of us are about to dump our nimble bicycle for a heaving rickshaw.

Enter the sport utility bicycle, a long bike nearly as dexterous as a conventional bike but with a remarkable capacity for cargo, whether that means lots of stuff or people. I recently turned my mountain bike (a Specialized Rock Hopper) into an SUB with a frame extension called the FreeRadical ($490), made by Xtracycle, a small, quirky and ingenious company based in Oakland, Calif.

I ordered it online and took the box to my local bike shop. The mechanic there removed my rear wheel, bolted on the extension and reinstalled the wheel, now 15 inches farther back. A lightweight cargo rack slipped easily into holes in the frame extension. On each side hang two large vinyl sacks. The "SnapDeck," a piece of bamboo shaped like a skateboard, fits on top of the rack. It's designed to carry more freight or double as a seat for passengers.

Ross Evans, the 33-year-old inventor of the FreeRadical, told me in a telephone chat that he came up with the design in 1995 while doing international development work in Nicaragua. He started building bicycle trailers to help indigent locals move cargo, but switched to a two-wheel design because of the narrow paths there.

To test whether I could abandon my four-wheel behemoth, I spent a week trying to do my errands using my new SUB. I aimed high right out of the gate: the family grocery trip to Trader Joe's. It's no milk run. I have a wife and two kids. We go through a lot of grub. The grocery list looked like something Santa would have drawn up. Not only did we need all the food staples, we needed milk, juice, soy milk, a half-case of wine, vinegars and other assorted liquids. (When did we start a liquid diet?) Liquid suddenly sounded very heavy.

Trader Joe's is three miles away. It was a pleasant ride. My bike is heavier by a few pounds -- it's certainly more cumbersome to carry down the porch steps -- but I couldn't feel the difference when riding. The bike performed pretty much the same as before. At Trader Joe's, I filled an entire grocery cart to the rim. By the time I reached the checkout lane, all seemed lost. No way this was going to fit on my bike.

Surprisingly, finding room wasn't a problem. Xtracycle says the FreeRadical is designed to haul 200 pounds of cargo. I was well over that but decided to go for it. I fit four full bags into the expandable vinyl sacks. I figured out how to cinch the straps around the backs to prevent my food from becoming roadkill. But I could feel the weight just lifting those bags onto the bike. Damn liquids.

When I hit the road, pedaling wasn't a problem. Most mountain bikes have a "granny gear" for this kind of work. Under the extreme weight, the bike frame felt wobbly, causing me to weave a bit. Luckily my route was almost completely on a bike path, rather than the street. I took it slow and easy and soon found myself cruising up my own sidewalk.

Next I wondered how it would feel with my kids on board. Once a week, I take the kids to the local farmers market. My son is about to turn 3. My daughter is almost 7. Combined, they weigh maybe 70 pounds. To make them comfortable, I bought two wooden FreeRadical footrests called "Footsies" from Xtracycle for my daughter. For my son's short legs, I bolted a piece of wood on the back of the bike frame for his feet. For a handlebar, I put some bike grips on a $5 piece of pipe and fastened it to the back of my bike seat.

The kids loved the ride and they seemed stable back there. The bike performed crisply, no wobbling or swaying. At the market, we were filling the vinyl SUB sacks with local do-goodery (including a $17 chicken, which better have been raised on the "Little House on the Prairie") when I remembered that we needed a new charcoal grill. A big one.

We pedaled over to the local hardware store. I bought a full-size, completely assembled Weber charcoal grill. We're not talking about the Smokey Joe here, but the giant, black kettle-shaped guy that is 23 inches across and has three long aluminum legs.

I rolled the grill out onto the sidewalk and parked it next to the bike. No rational person would attempt to strap that sucker on the bike. I tilted the grill on its side. Amazingly, the long straps on the sacks reached around it. I cinched them down. The grill was attached. In fact, it seemed pretty secure. The SnapDeck was still clear.

I plopped the kids back on top of the SnapDeck. We must have looked like a cartoon, three people and a Weber grill coasting down the road. The bike still rode nicely, cruising past traffic.

Now I felt ready to push the mental barrier. I was doing things that you are not supposed to be able to do without burning gas. I was kicking carbon's ass. Now it was time to laugh at him and call him "Shorty."

It just so happens that Xtracycle also manufactures the perfect mental liberation: the pedal blender ($300). You heard me: a blender to make smoothies. You attach the pedal blender to the bike in place of the SnapDeck. As the rear wheel spins, so does your smoothie. You can either pedal around town and be a Jamba Juice on wheels or attach two small medal stands that elevate the back wheel for blending in place.

I called two friends with Xtracycles for a triple date with our wives. We got together in my friend Jeff's backyard, pulled the SnapDeck off his bike, put it up on the stands and popped in the blender. In went the ice, tequila, triple sec and lime juice. I climbed aboard and pedaled our way to Margaritaville. After cocktails, we all got on our bikes and rode to a restaurant. Maybe I'm easily amused. But blending a drink with a bicycle and pedaling one's wife to a restaurant feel like some sort of small victory, a new taste of freedom.