What's so funny about Will Ferrell and John C. Reilly whacking each other in the head? Everything. 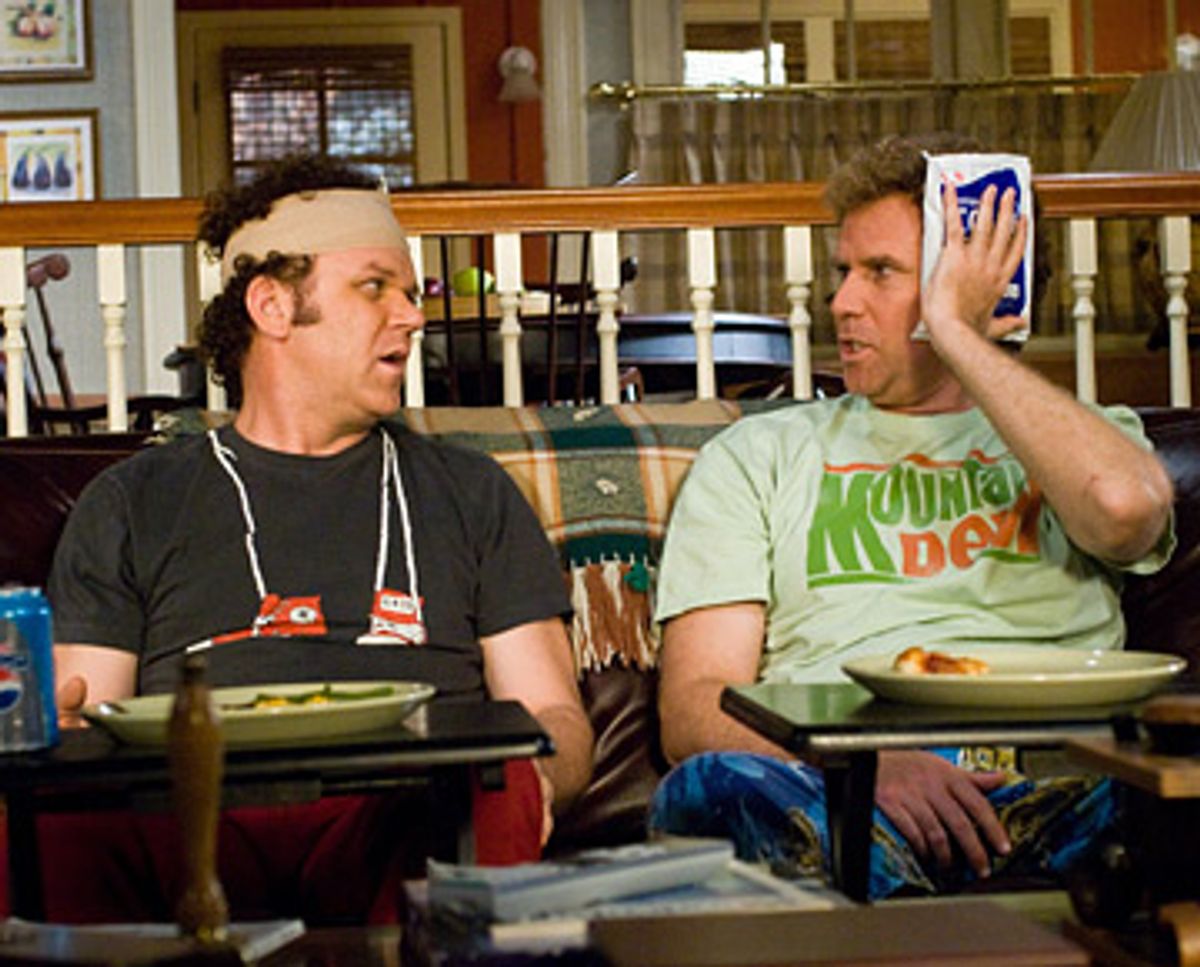 In the mid-'60s I lived next door to twin boys of around 10 who were dressed by their mother in neat crimson jackets with gold buttons; their trim little striped bowties and military-style crew cuts gave them an air of conservative dignity. But the minute their mom's back was turned, these tiny menfolk would start clobbering the crap out of each other, like minisavages vying for some kind of primal supremacy.

In "Step Brothers," Will Ferrell and John C. Reilly -- minus the jackets and bowties, of course -- are a little like those twins. Brennan (Ferrell) and Dale (Reilly) are unemployed 40-ish guys who still live at home, Brennan with his mother, Nancy (Mary Steenburgen), and Dale with his father, Robert (Richard Jenkins). When Nancy and Robert marry, they merge their families, "Brady Bunch" style. Brennan and Dale can't stand each other, but they do have several things in common other than their joblessness. For one thing, both have a tendency toward sleepwalking: They wander out of their twin beds to wreak havoc in the kitchen, murmuring and stumbling around like somnambulist creatures out of "Dr. Seuss's Sleep Book."

Brennan and Dale will ultimately become closer than real brothers, but not before they endure numerous trials, which include whacking each other in the head with the likes of baseball bats, shovels and tricycles. I almost never laugh at characters who whack each other on the head. But for some inexplicable reason (and are there ever explicable reasons why comedy works?), it cracked me up in "Step Brothers," maybe because Ferrell and Reilly always look a little like they've just been whacked on the head, anyway: In "Step Brothers," they squint at each other with a foggy mix of resentment and camaraderie, two child-men who never got over the trauma of shooting through the birth canal and finally have a kindred spirit to take it out on.

"Step Brothers" was directed by Adam McKay, who also made the very funny "Anchorman: The Legend of Ron Burgundy" and the somewhat less funny "Talladega Nights: The Ballad of Ricky Bobby" -- although it's possible his real masterpiece is the widely circulated short "The Landlord," in which Ferrell is hassled by a foulmouthed, 2-foot-tall landlady in a dress that resembles an oversize fairy costume. (She happens to be about 2 years old.) "Step Brothers" -- which was written by McKay and Ferrell; Judd Apatow is one of the producers -- is like "The Three Stooges" for grown-ups, although that comparison doesn't quite work because there are plenty of grown-ups who still like "The Three Stooges" (you know who you are). Stupid, crude and hilarious, "Step Brothers" works by sneaking past our better judgment: I don't know why the sight of Reilly, aggressively chattering at his dignified doctor-father while dressed in a faded Bahamas T-shirt and Kelly green Underoos, is funny. It just is.

If you're anything like me -- and even if you're not -- you're probably thoroughly sick of Will Ferrell. But watching him play against Reilly -- a marvelous dramatic actor who also has a fine, offhand sense of comic timing -- is almost like watching a man reunite with a long-lost, equally knuckleheaded twin. Their characters here are two halves of one dimwitted whole. With Reilly around, Ferrell's more annoying qualities (like his forced faux innocence) tend to merge invisibly with his funnier ones (like his knack for playing self-aggrandizing boobs). Dale and Brennan find common ground in bickering, rough-housing and thumbing through vintage copies of Hustler. These are two guys who've been left behind by the real world, so they retreat into their adolescent cocoon, pretending they're too good for that world anyway. Reilly and Ferrell also manage to capture, in between whacking each other on the head, how much their characters fear that world. And so at one point we see Reilly perched on his bed, bitching and moaning to Ferrell about some hangnail-caliber injustice -- while wearing a Chewbacca mask.

And how can you not love a movie in which Richard Jenkins (the wonderful character actor who, deservedly, has become something of an indie star for his role in "The Visitor") gets the babe (the radiant and wryly funny Mary Steenburgen) in the first scene? "Step Brothers" opens with one of the more infamous George W. Bush quotes: "Families is where our nation finds hope, where wings take dream." Neither Dale nor Brennan could put it better. And anyway, they're too busy knocking each other's lights out in the name of brotherhood.