"The X-Files: I Want to Believe"

This suspenseful, intimate movie reminds us why we've always believed in Mulder and Scully. 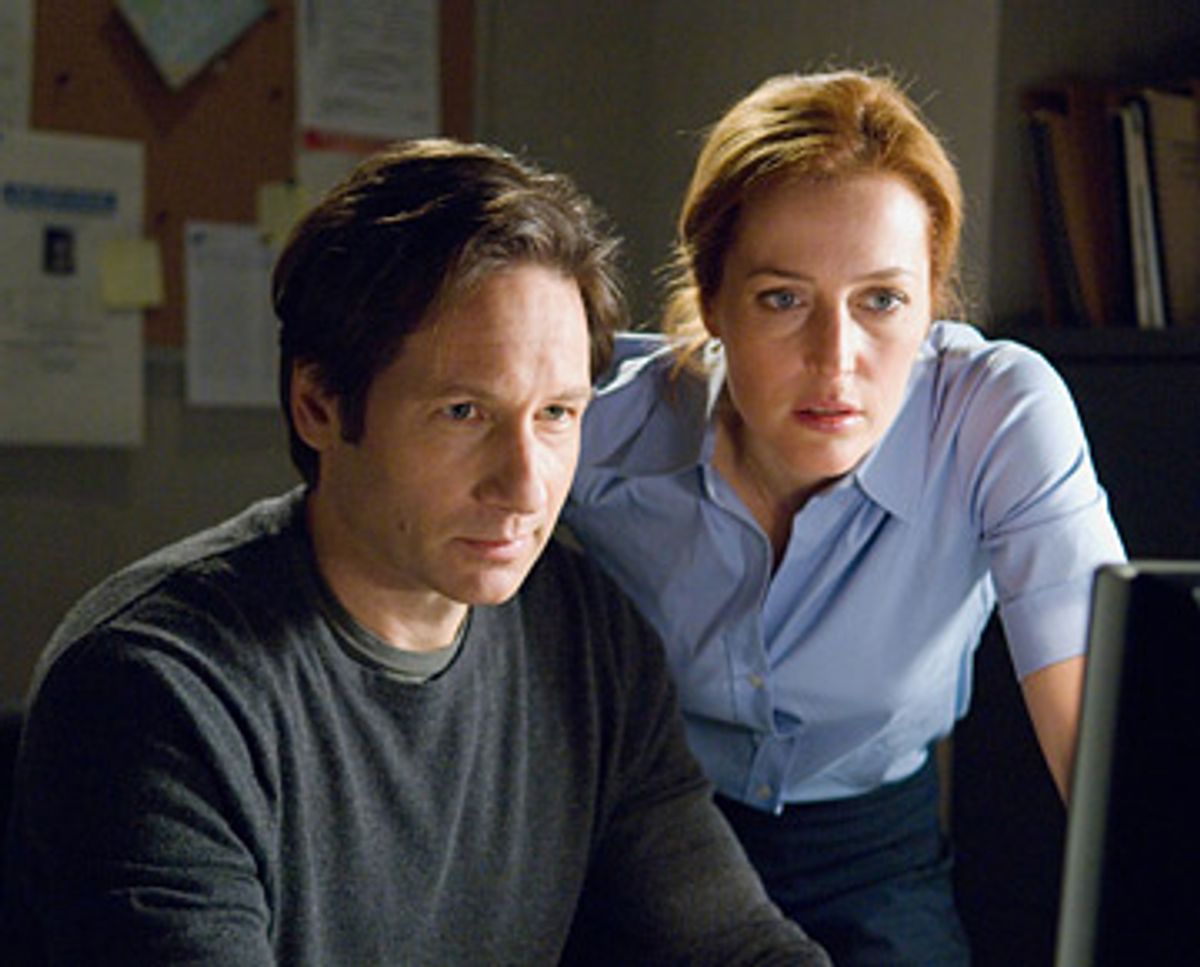 It's hard to say if "The X-Files: I Want to Believe" is exactly the movie fans of the revered series -- which aired from 1993 to 2002 -- are hoping for. The relatively straightforward plot involves only minor trickery, and you don't need much previous knowledge of the "X-Files" universe to follow it. The director, Chris Carter, the creator of the original show, has dispensed with the convoluted mythology that bogged down the show in the last third of its run. "I Want to Believe" comes off like a solid -- if not great -- episode from one of the show's early seasons, a reasonably suspenseful story made by a director with a sturdy sense of how to tell a story.

Yet it's the very modesty of "I Want to Believe" that makes it so admirable. Carter doesn't try to meet or exceed fans' expectations so much as create an intimately scaled dramatic universe for his fiercely beloved characters, Dana Scully and Fox Mulder, to inhabit, circa 2008. He also, wisely, has made a picture that's vastly different from the 1998 movie "The X-Files" (of which I remember very little, other than how disappointing it was). The story here involves a hunt for a missing FBI agent that's being led by a fellow agent (a no-nonsense Amanda Peet) with the help of a psychic priest with an unsavory past (played, with every nerve atwitch, by Billy Connolly). Scully (Gillian Anderson), now working as a physician at a Catholic hospital, has happily left FBI work behind, although the challenges of her new job aren't any easier: She's currently trying to treat a young boy who's suffering from a degenerative brain disease her colleagues assure her is untreatable. When the FBI approaches her, asking her to intercede in bringing the disgraced Mulder (David Duchovny) back to work to help find that missing agent, she agrees to help: She approaches Mulder, hunkered down in his messy study, a mountain man with a bushy beard who appears to spend his days muttering seminonsense about conspiracies and clipping random items of interest out of newspapers. Scully suggests it might be good for him to go back to work, and the visual evidence she needs to make that conclusion is right there in the ceiling of Mulder's study: The pencils lodged there, like makeshift darts, are surely the work of one very bored guy.

The plot of "I Want to Believe" -- the script is by Carter and Frank Spotnitz -- has been kept under close wraps, and I'll say nothing more about it other than that it contains numerous supernatural twisty turns and red herrings, and only a few glancing references to UFOs. What's more noteworthy, to me at least, is the interplay between Mulder and Scully, who are now very clearly a couple (a development that took shape in the show's last few seasons, after, I confess, I stopped watching). The details of their shared past -- the life these characters have lived together from 2002 to 2008, that is -- are never fully spelled out for us. We join their relationship already in progress, and the relaxed way in which Carter and his actors fill out the contours of that relationship is the best thing about "I Want to Believe."

On the show, Duchovny's Mulder was always so understated that he sometimes appeared to be shimmering beneath the surface of any given story line. It was his job to spin out the craziest, most nutball theories, and it was Scully's job, as the woman of science, to poke holes in them. The recurring gag of the show was that Mulder, no matter how screwy his ideas were, was usually right -- although I don't think the intent was to suggest that man's intuition trumps that of womankind, but more to affirm that logic can take us only so far.

Here, Duchovny resuscitates the character of Fox Mulder, breathing life into him once again. Mulder becomes deeply involved in this new case, while Scully resists being pulled back into the darkness of her old job, her old life: Her new life, one that makes her responsible for the lives of her patients, is trying enough. Duchovny gives a nicely shaped performance here -- he still has the ability to suggest the boyish eagerness beneath Fox's blasé demeanor. But the movie really belongs to Anderson. The title has a double meaning, one that's different for each of the two main characters: Fox has always been eager "to believe"; for Scully, the desire has been more muted, but perhaps just as persistent. This is a woman of science who always wears a small gold cross around her neck -- but who also bristles when the parents of her young patient announce they want to stop his treatments and leave his fate up to God. While Mulder is engaged with trying to solve a supernatural mystery, Scully's suffering is rooted in the real world: She's a woman who has put her faith in science, though she's always aware of the ways science can let us down.

Anderson's face shows all of that, in the soft curve of her skeptical smile, or in the bemused expression that plays across her face as she listens to her partner's wackier theories. Now, he's no longer her work partner, but her partner in the tougher business of life. In "I Want to Believe" we get only glimpses of Mulder and Scully's private life together, and it's better that way: In one scene, surprising for its very casualness, they huddle in bed together beneath a comforter. Scully, consumed with worry about her patient, can't sleep; Mulder suggests he might have something to help, which makes her smile. The scene suggests the easy intimacy of people who've been together for years and who, miraculously, against all odds, still like each other. And if nothing else, "The X-Files: I Want to Believe" offers us some comforting continuity, reassuring us that characters we've come to love, and have so sorely missed, have gone on to lead lives without us. They don't need us to justify their existence by believing in them, and still we do -- maybe because, just like they do, we want to believe.