The graying of Obama

Maybe I am imagining things, but if his temples are any indication the junior senator is looking a little more senior lately. 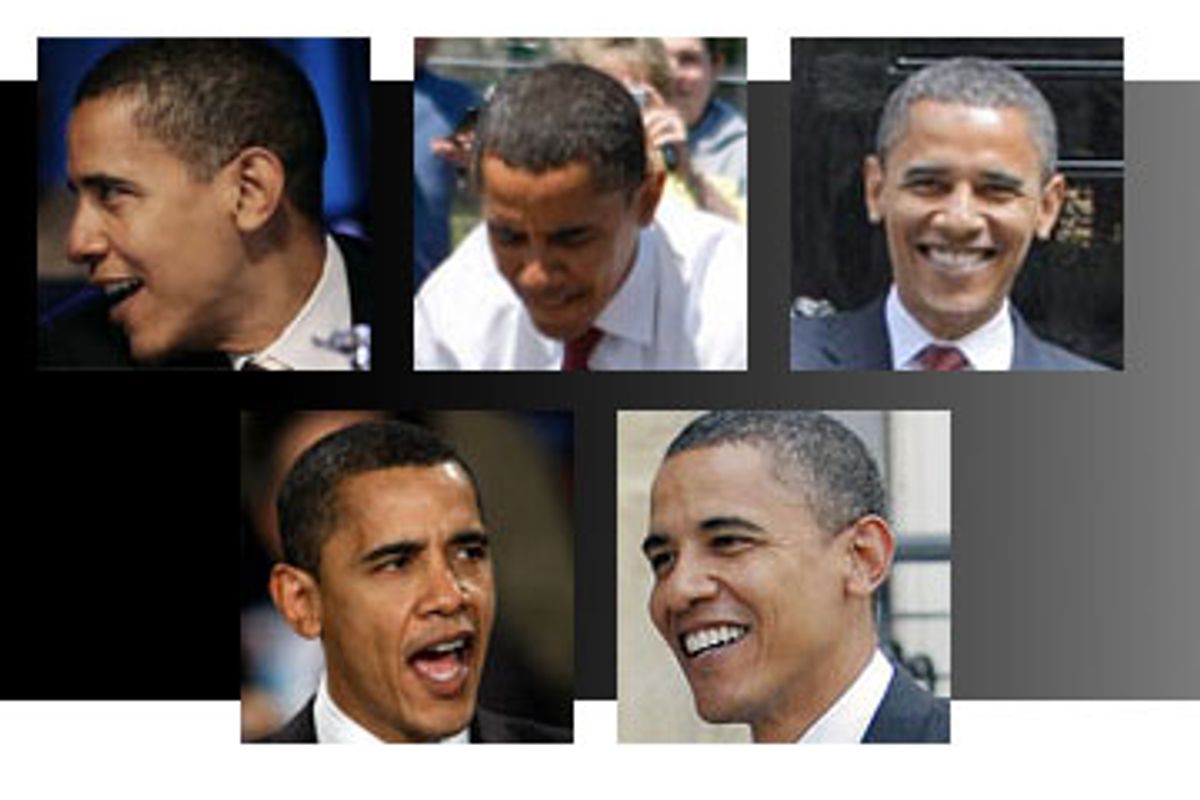 I just saw a clip on CNN of Obama speaking Sunday to the minority journalists' Unity '08 conference, in the unusual (for him) attire of a taupe or beige summer-weight suit, and he looked a bit more gray around the temples than I remember.

So I did a little poking around, and it seems like he is grayer now than even a few months ago. I leave it to the judgments of Salon's astute readers, but tell me if I am wrong about this. To wit:

Non-gray Obama, just a few months ago debating Hillary Clinton, from the side here.

Graying Obama, this past week in France, from the side here.

Graying Obama, in front of 10 Downing St. this past weekend, head-on image here.

Finally, I found this photo from an unusual angle, Obama from the top, in North Carolina, the week before the Indiana and North Carolina primaries, looking somewhat gray but maybe not as gray as this past week. (The soon-to-be-famous transitional photo between pre-gray Obama and post-gray Obama!)

Maybe my nonscientific photo survey results are an artifact of the differences in resolution, photo size or the lighting of these snapshots. Maybe when his hair is shorter you see more of his scalp, which looks like gray hair on television or in photos. Or perhaps Obama is allowing a bit more gray to sneak out to reaffirm in voters' mind that he is mature beyond his years, ready to lead. But Obama just looks grayer this week, suggesting either that he has been dyeing his hair at certain points throughout the campaign and/or that the long international trip across several times zones turned his hair gray.

Pictures of presidents before and after their terms in office invariably show a striking increase in snow-on-the-playing-field after four or eight years performing that very stressful job. Is the graying of Obama yet another component of the senator's rigorous, on-the-job training?

UPDATE: An alert reader (hat tip, Faraz) informs me that I am not the first to notice this trend, and graciously steered me to this recent story reporting Obama's self-deprecations about how the job is causing him to gray.