With the $12 trillion mortgage-lending industry hanging by a thread, President Bush had no choice. He put away his veto pen and signed a really, really humongous blank check. 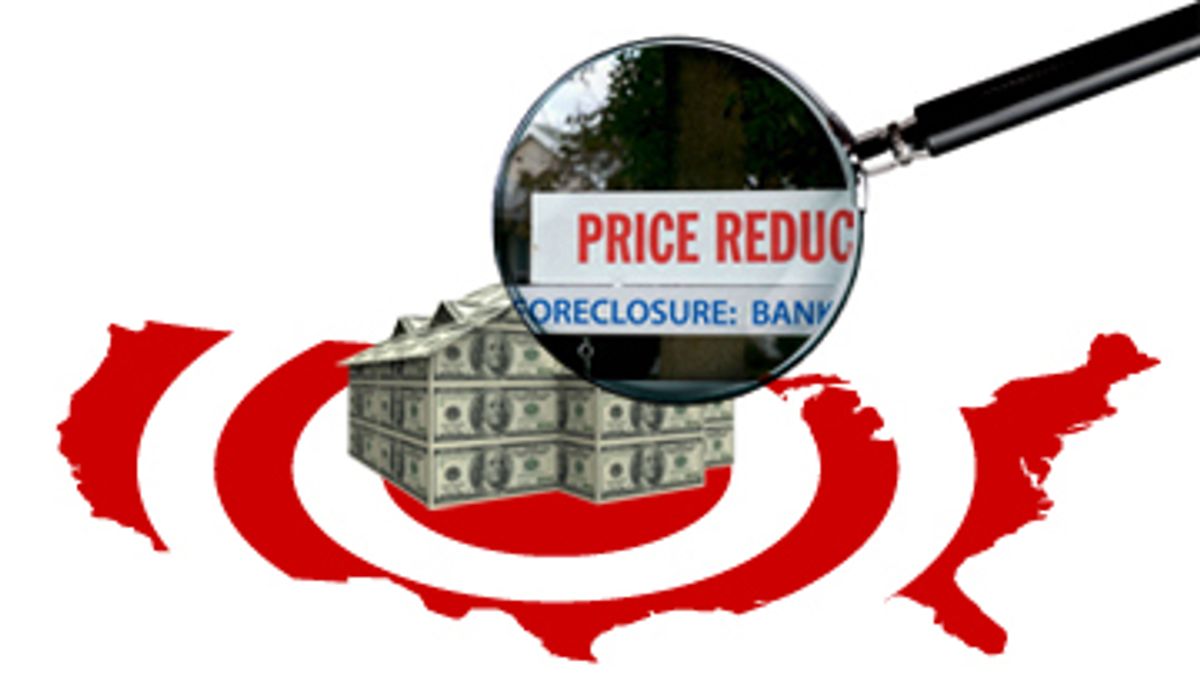 Without any hoopla, President Bush signed the 2008 Housing and Economic Recovery Act at 7 a.m. Wednesday. The lack of celebration was understandable. The new bill puts taxpayers at so much potential risk that Congress had to simultaneously authorize raising the statutory ceiling on the national debt by $800 billion just to make sure it will have breathing room to make good on its new promises. The message from the White House: Big government just got a whole lot bigger.

And that's not how it was supposed to be for the presidency of George W. Bush. It's Grover Norquist's worst nightmare. The same week that the Bush administration announced that the annual budget deficit was set to balloon up to $482 billion in 2009, Bush signed a new piece of legislation that virtually guarantees even bigger deficits in the future.

Yet Congress and the president had no choice. This year the United States is likely to witness 2.5 million home foreclosures. Friday-morning federal bank rescues are becoming a weekly event, and Wall Street's most elite bluebloods are continuing to hemorrhage billions of dollars every financial quarter. When the nation's entire financial system lurches to the brink of catastrophic failure, sane politicians are forced to act, regardless of their ideology.

Most coverage of the housing bill has focused on the commitment to shore up Freddie Mac and Fannie Mae, the two "government-sponsored entities" that between them hold about $5.2 trillion worth of mortgage debt. The U.S. government's implicit support of the two GSEs has now been made explicit. From now until the end of 2009, the Treasury can spend as much as it wants (provided it doesn't exceed the $10.6 trillion national debt limit) to make sure Freddie and Fannie stay solvent.

But the 700-page bill is packed with much, much more than the potential for one of the biggest bailouts in American history! The bill is a true omnibus: It aims to help as many as 400,000 homeowners refinance their mortgages, authorizes up to $15 billion in tax breaks to encourage Americans back into the real estate market (including a $7,500 tax credit for new homebuyers), and will hand out $4 billion to local government agencies to help them buy and refurbish foreclosed homes. It reorganizes the Federal Housing Authority, includes provisions to help veterans and current service members avoid foreclosure, cracks down on mortgage fraud, and expands housing counseling.

There's even a new tax credit to encourage the use of energy-efficient stoves that run on biomass fuel for home heating. You name it, this bill has got it.

In other words, it's the kind of bill that the heirs of Ronald Reagan have been decrying for more than a quarter century. Too bad for them: The new bill is all the proof America needs to show that when push comes to shove, no American administration, even one as willfully stubborn and reality-challenged as the current White House, will keep its faith in letting the free market handle its own problems while all else fails.

So are Americans safer now? The bank run on IndyMac two weeks ago sent tremors through the entire United States. A year ago, we were being told the housing crisis was "contained" -- today, we're considering the very real possibility that some of the biggest lending institutions in the country -- Countrywide, Washington Mutual, Wells Fargo -- could hear the banking regulators knock on their headquarters doors. And we wonder, are our own bank accounts safe?

(Short answer: If you don't keep more than $100,000 in an account at any single FDIC-insured institution, you're likely OK.)

It's impossible to predict, at this juncture, how bad the current crisis is going to get for the banking industry. But there's little question that the root of most our current financial evils can be traced to the ongoing housing bust. Even though the rate at which home prices are declining appears to be slowing, the year-on-year drop in median prices is still substantial -- 16 percent just this past June. A $12 trillion superstructure of mortgage loans teeters on top of all that deflating real estate, and an incalculably large universe of derivative financial instruments extends out even further. As long as the waves of mortgage defaults and foreclosures continue to crash against Wall Street, the financial markets are going to be trigger-happy and investment bank CEOs will be looking over their shoulders.

We can't say for sure whether the 2008 Housing and Economy Recovery Act will turn the tide. All we know is that it marks the most ambitious and far-reaching attempt yet by the U.S. government to breath new life into the housing sector and to make it clear that no matter what happens, the feds will not let Fannie Mae and Freddie Mac collapse. The very fact that Bush abandoned his earlier threats to veto the legislation, which he reputedly called "socialistic," is all the testament we need of our government's unwillingness to abandon the marketplace to its self-immolating fate.

The 2008 Housing and Economic Recovery Act, whether or not it succeeds, or is merely the first step in a series of even more drastic moves, is yet another moment of high tragic irony for the Bush administration. Just a few years ago, a more aggressive stance by the Bush administration and Greenspan's Fed in steering the mortgage-lending industry away from its go-go immersion in a swirling hot tub of real estate excess might have resulted in a far different scenario playing out now. Just a few weeks ago, the Federal Reserve Bank released new guidelines for mortgage lenders, instructing them not to make loans to borrowers who would not be able to pay them back. What if Greenspan had made a stern speech to Wall Street conveying the same message in 2004? A little moral suasion from the Maestro could have gone a long way.

And in the process, the Bush administration would have had a chance of maintaining some semblance of adherence to its own ideology. But by refusing to exercise any leadership at all -- even worse, to declare that the very act of leadership would be untoward interference in a market deemed to be self-correcting -- the Bush administration ended up facing a disaster so great that Americans are now enjoying the unlikely sight of a rock-ribbed Republican and former CEO of Goldman-Sachs, Hank Paulson, presiding over one of the greatest expansions of direct government meddling in the economy in the past quarter century.

We don't know what the future will bring, but looking at the past, the message of the 2008 Housing and Recovery Act is pretty clear: An ounce of prevention is worth a pound of cure. The Bush administration blew it.