"The Mummy: Tomb of the Dragon Emperor"

Peel back the extravagant layers of this summer blockbuster and what do you find? 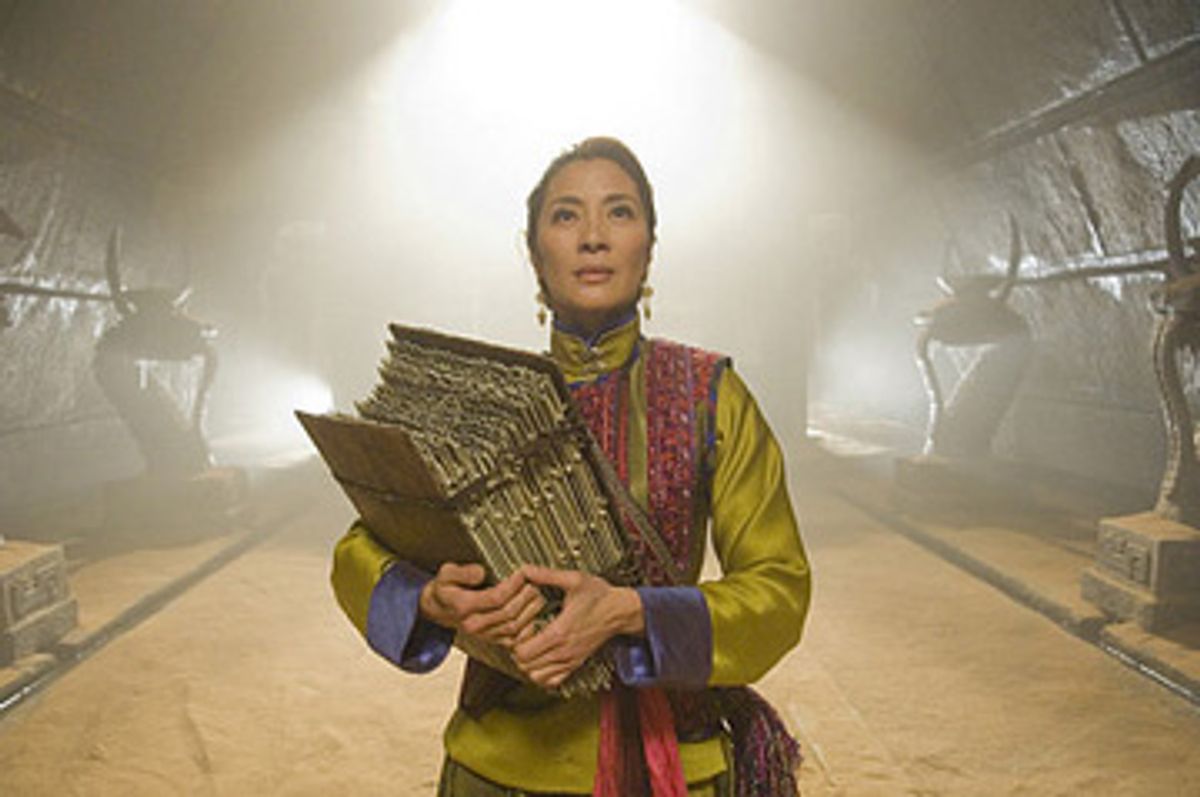 There's a whole lot of extravagant nothing in "The Mummy: Tomb of the Dragon Emperor," the third installment -- or is it the 33rd? -- in the "Mummy" movies franchise. The first, released in 1999, was a clever takeoff on old-movie serials, a picture that put special effects to good use instead of being driven by them. Its casual, throwaway quality made it the sort of Saturday-afternoon picture you could watch anytime. The 2001 "The Mummy Returns" worked much harder to impress and suffered for it: The picture was forced, cluttered and manic.

"Tomb of the Dragon Emperor" is more of the same -- and yet less. This new "Mummy" -- which was written, in a manner of speaking, by Alfred Gough and Miles Millar -- is set in 1946, 13 years after the previous installment, and the O'Connells, Rick (Brendan Fraser) and Evelyn (Maria Bello, taking over for Rachel Weisz), have retired from excavating cursed tombs and are now bored out of their skulls in the English countryside. Rick has attempted to take up fly-fishing (unable to cast properly without hooking himself, he resorts to blamming the poor little fish with a handgun). Evelyn has written several successful novels based on the couple's adventures, but she now faces a serious case of writer's block: Ennui has caused the river to run dry. Luckily, their son, Alex (Australian actor Luke Ford), now grown up, has dropped out of school and has unwittingly initiated his own dangerous adventure by violating the digs of an ill-tempered ancient Chinese emperor, Han (Jet Li). Meanwhile, Rick and Evelyn accept an assignment to return a special jewel to a Shanghai museum, and their trek will lead them straight into the clutches of the not-so-dead Han.

In some ways I feel sorry for "Tomb of the Dragon Emperor" as an enterprise: Not only is it shoehorned into a forlorn early-August slot, by which point most of us are already suffering summer-blockbuster fatigue; it also has the further misfortune to arrive just a few weeks after the release of "The Dark Knight," a movie so revolutionary that Orson Welles himself has reportedly risen from his own emperor's tomb to concede that, you know, that "Citizen Kane" thing he made really wasn't so great after all.

"The Dark Knight" does make somewhat more visual sense than "Tomb of the Dragon Emperor," but both pictures suffer from similar delusions of grandeur, mistaking oversized scale for solid storytelling. It's impossible to tell what's going on at any given moment in "Tomb of the Dragon Emperor"; it's even harder to care about being able to tell. There are some cool visual effects -- for example, a bunch of galloping stone horses with glowing eyes -- but most just feel cheaply borrowed from the earlier movies. Han's face deteriorates and reshapes itself before our eyes, as if unable to make a choice between stone and flesh. It's kind of neat, but it's not an effect that resonates -- there's no poetic thrill to watching it. And the action sequences, like most action sequences these days, are so chopped to bits that it's impossible to tell who's doing what and who's coming from where. The director, Rob Cohen, has made hugely entertaining luxe B-movies like "xXx" and "The Fast and the Furious," but here he seems to have forgotten everything he knows, mistaking visual chaos for visual excitement.

As the adage goes, Never act with animals and children. And that probably goes for yetis too: "Tomb of the Dragon Emperor" features two of them, although the human actors here would be doomed even if these ridiculous, shaggy white creatures had stayed on the storyboard, where they belong. Fraser has been a dependably likable presence in both of the previous "Mummy" movies, and he gets a few good comic moments here (like the one in which he offs those poor little fish). But mostly he's an afterthought, and Bello, in a dark coif forced into curls that don't suit her, fares even worse: She's a wonderful actress, but here she looks as if she's desperately trying to have fun in a picture where there's no fun to be had.

If the white actors in "Tomb of the Dragon Emperor" have it that bad, wait till you see how the movie treats the Asian ones. Why cast terrific actors like Jet Li (who gave just a hint of what he's capable of in the 2005 "Unleashed") and Anthony Wong (who has been marvelous in "The Painted Veil," "Infernal Affairs" and "Exiled") just so you can turn them into faceless villains? Only Michelle Yeoh, in a small role as a powerful witch, manages to bring grace and dignity to these sorry proceedings. You can almost smell the desperation pouring off "The Mummy: Tomb of the Dragon Emperor." And who, in the middle of summer, wants to spend nearly two hours in a stinky crypt?