Hideous dresses! Pricey parties! With the cost of being in a wedding spinning out of control, how do you say no to a demanding bride? 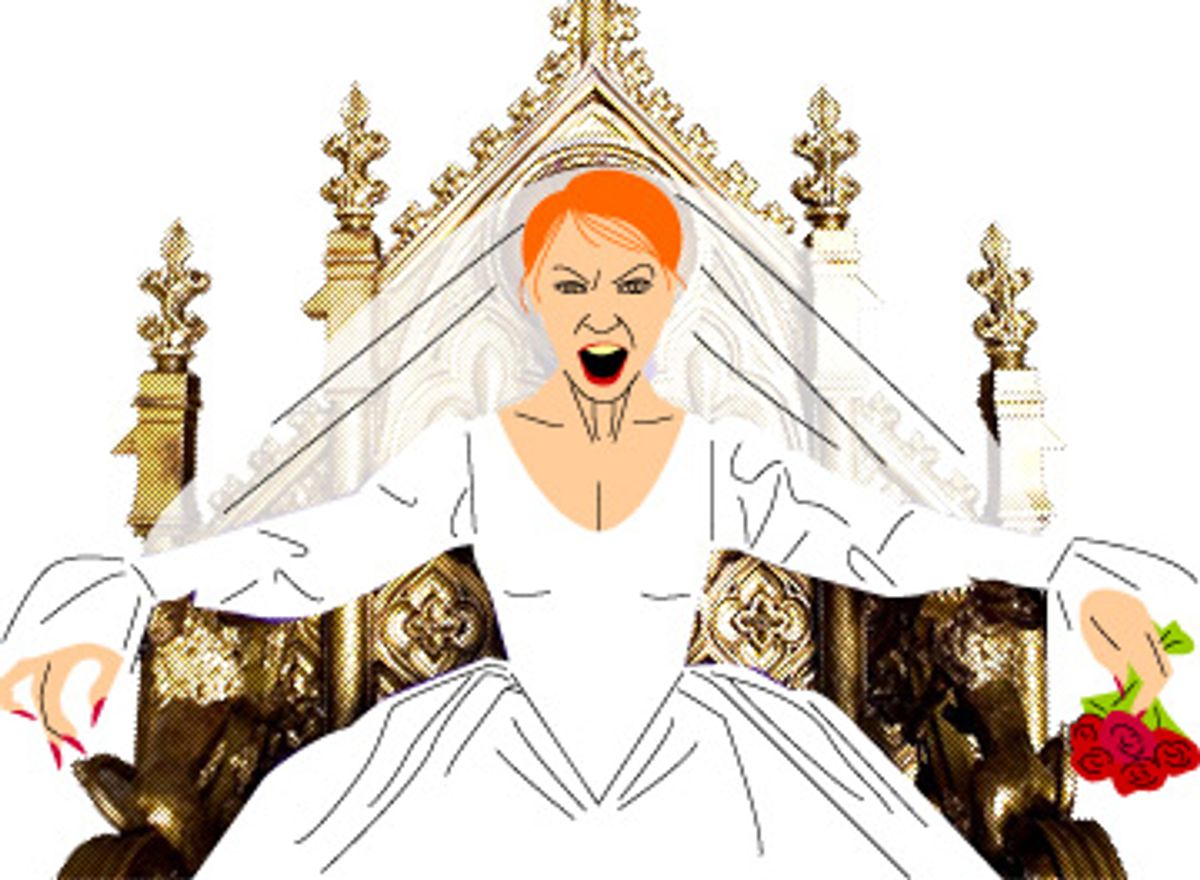 When a good friend asked 29-year-old Sarah Foreman to be a bridesmaid in her wedding, she was elated. She was also confident that the bride, her former college roommate with whom she'd struggled to afford low-cost, high-sodium, zero nutritional value meals, would be sensitive to Sarah's precarious financial situation.

Foreman lived in Los Angeles and worked at a nonprofit (read: she was broke). The bride, however, had long since traded Ramen noodles for steak frites. She and her fiancé each earned six figures and together they owned two homes.

As if the three destination bachelorette parties -- one in Santa Fe, one in Chicago and one in South Beach, Fla., which all the bridesmaids were expected to attend at their own cost -- weren't enough, the bride-to-be also told Foreman to set up a PayPal account for her wedding gifts and to encourage guests to make monetary contributions.

Before I continue, it should be noted that if my interview with Foreman were televised, she'd be wearing sunglasses and a never before and never again to be worn sweater, her face blurred and her voice altered with an electronic box. For this story, she asked that her name and identifying details be changed to prevent the bride from hiring a hit man. (In the course of my research, this was not an uncommon request.)

Uncomfortable with the PayPal demand, Foreman gently tried to explain to the bride that a PayPal "registry" might be perceived by some as lacking in couth. "The bride's response was that in Chinese culture it's acceptable and even expected to give money at weddings," says Foreman. "But she's not Chinese and neither is her husband ... though I think one of his co-workers might have been." Ultimately, Foreman acquiesced.

As an unmarried, guilt-prone woman, I cannot imagine ever feeling comfortable or confident making such a request of a friend, much less a series of similar requests over a period of 17 months, the average length of engagements in the United States. As Siri Agrell, the 30-year-old author of "Bad Bridesmaid: Bachelorette Brawls and Taffeta Tantrums -- Tales From the Front Lines," points out, "that's longer than most jail sentences." (The average jail sentence is six months.)

Agrell's book, inspired by a bridesmaid stint from which she was fired, includes harrowing stories from more than 40 bridesmaids. There are numerous tales about what Agrell refers to as "all the regular stuff, such as having to tie ribbons on hundreds of wedding invitations or learn an intricate dance routine for the first dance." And then there are the real doozies.

"One woman, who was asked to be a bridesmaid in her Mormon friend's wedding, found out on the morning of the wedding that she wasn't actually going to be allowed inside the temple because she wasn't Mormon," says Agrell. "Her job as a bridesmaid was to stand on the front steps of the temple in her full bridesmaid's outfit and ask those who showed up, 'Are you a believer in the Church of Latter-day Saints?' She had to make sure that non-Mormons, including the bride's father, who had been excommunicated, did not get inside."

"Yep," says Agrell. "You don't know who's crazier, the people who ask or the people who actually go along with it." Of course, that particular request almost seems mild in comparison with those listed in a recent New York Times article, "It's Botox for You, Dear Bridesmaids," a disturbingly noncritical look at a growing trend among brides to request that members of their wedding party undergo an array of cosmetic procedures -- teeth whitening, chemical peels, Botox and plastic surgery -- before the wedding.

Huh. After reading the article, I imagine a scenario in which one of my yet-to-be-married female friends says, "I want you to be in my wedding, but first you'll have to get new boobs." (The imagined scene ends in expletives, with me relieved of bridesmaid duty, my 34B's happily intact.) Fortunately, I don't think I'm friends with anyone who'd make that request. So who are these brides, and what's wrong them?

"This caricature of the Bridezilla is easy to understand," says Rebecca Mead, author of the bestselling wedding industry exposé "One Perfect Day: The Selling of the American Wedding." She argues that it's not the demanding brides who warrant scrutiny but the culture in which they are created.

"We all know women who've gone crazy about their wedding day. I think it's easy to criticize individual brides for excess -- and certainly they commit excess -- but we live in a Bridezilla culture, where the whole wedding system is set up to make a bride think it's her right and her privilege and probably even her duty to have this day which is all about her. And if it's all about you, then there's no limit to what you can expect of your supporters and attendants and the great circus of people around you."

To hear Mead explain it -- and to read her book -- is to understand the origins of and even appreciate the unreasonable bride request, leaving me with a daunting question that plagues many former bridesmaids who've gone into debt or delirium, often more than once and against their better judgment, so that a betrothed friend could experience "her perfect day." Namely, if a request was so unreasonable, why didn't any of the bridesmaids -- and there are an average of five bridesmaids in each American wedding -- put the kibosh on it?

Carmen Brown, a 35-year-old publicist, finds herself regularly mulling over this question, particularly every time she looks in her closet. In it hangs the pricey custom-made lime green bridesmaid's dress that she reluctantly agreed to design, pay for and wear in her friend's wedding.

Her friend had sworn that she "was not going to be one of those brides, that the bridesmaids could wear whatever we wanted, that there would be none of that Jessica McClintock bullshit," recalls Brown. Two months later she received an e-mail from the bride-to-be, saying that she'd purchased yards of fabric in lime green, and would her bridesmaids mind designing their own dresses and getting them tailored. "It went that fast," explains Brown. "She sold it like it was normal, and it took me a while to realize the bait and switch that had occurred."

After the wedding, Brown and her fellow bridesmaids sat around in their "expensive handmade frocks," dissecting the phenomenon that is bridal party compliance. "We were all thinking the same thing. So I asked, 'Why didn't anyone say anything?'" recalls Brown.

Wedding coordinator Jeanne Hamilton, author of "Wedding Etiquette Hell: The Bride's Bible to Avoiding Everlasting Damnation" and founder of Etiquettehell.com (a Web site "for manners and civility"), offers up two somewhat unusual similes to explain this type of compliance. "Bridesmaids will put up with all kinds of things that I, personally, wouldn't put up with, because it's like the Stockholm syndrome," she says. "You not only begin to identify with your oppressor, you become like them."

She continues, "It's also kind of like the frog in the pot of water that's slowly turned to boil. The frog doesn't realize it's being boiled to death until it's too late."

Brown concludes that, in her situation, one problem was that the bridesmaids in that wedding didn't actually know one another. "We were people she knew from different phases of her life -- high school, college, work. If I had been close to any one of those women, some of whom I'd never even met before, I suspect we could have tried to gently stage some kind of intervention."

But even the gentlest of bride interventions -- be it a solo or a group endeavor -- is easier said than done. "It's very hard to turn around to one of your best friends and say, no, I'm not doing that," admits Mead. "Nobody wants to be the person who's sour about something so delightful and optimistic as the beginning of a marriage."

I ask Mead if she has any advice for future bridesmaids. "Well, playing Miss Manners isn't really my thing, but if someone asks you to be in a wedding, maybe the thing to do is to say upfront, 'I'd love to, but do you have any idea what it's going to mean in terms of financial commitment,' if that's what you're really concerned about."

I also ask Hamilton for some words of wisdom, and her advice is similar to Mead's. "You've got to know -- and let the bride know -- where your line is in the sand," she says. "When asked to be a bridesmaid, it's not inappropriate to ask, 'What are your expectations of me going to be?' before accepting. If the bride's response is, 'I will need you to fly all over the world,' it's perfectly OK to say, 'I think I'm going to have to decline the honor. It just sounds like more than I can handle at this stage of my life.'"

She points out that a similar "I'm sorry, but I can't accommodate that request" is also acceptable if, in the later stages of wedding planning, the bride asks a bridesmaid to alter her physical appearance -- be it via Botox, a haircut or a particular shade of nail polish -- in a way with which the bridesmaid is not comfortable. I point out that I've seen friendships end over less.

Hamilton, however, assures me that enabling bad behavior doesn't do anyone -- the bridesmaid or the bride -- any good. "I tell bridesmaids that they're almost being so kind that they're cruel when they don't confront the bride, who is allegedly a good friend." She emphasizes that such a confrontation should not entail screaming or cursing but that the bridesmaid should be calm, firm and as unemotional as possible.

Agrell also addresses the friendship factor when offering up advice. "The real key [to avoiding a bridesmaid catastrophe] is to nip it in the bud in the beginning, and don't be a bridesmaid for someone that you're not close friends with," she says. "Because I like to think that if you are close friends with someone, then they'll get it if you say this is too much."

This sounds reasonable enough. But what if, like me, you're plagued by the guilt-inducing "It's her perfect day and she picked me to help celebrate, so I have to say yes and do anything she wants" credo that breaks even the strongest of women?

"Many bridesmaids feel too flattered at the idea of being asked to be part of the bridal party and too bashful or selfish at giving their friend, the bride, anything short of their left arm for the perfect wedding day," confirms Rebecca Dolgin, executive editor of the wedding site TheKnot.com.

For those who will inevitably and indiscriminately say yes to bridesmaid duty, Dolgin provides a do's-and-don'ts list of "tips to survive the wrath of bridezilla." Do, for example, "set her expectations of your time and money capabilities. Do send a subtle 'cool it' cue: tell her one of the stories you read in this article as a 'you wouldn't believe this crazy bride' anecdote and say, 'you would never do that!'"

Don't, for example, "forget this is an emotional time of tremendous change for her, and her bridezilla behavior is just a symptom of her appropriate fear and underlying insecurity about having 250 people watch her make the most important commitment in her life. Don't be the devil's advocate with planning/taste issues."

Again, this makes sense. Although, after hearing Brown's story about the lime green dress and that of Jenny, a Southern bridesmaid who, along with 11 other bridesmaids, "was instructed to hold the bouquets low to make you look skinnier," I have to disagree with that last piece of advice.

Tobin Levy is a freelance writer living in Austin, TX.