The Times columnist says Americans are having a hard time connecting with the Democratic nominee. Is the problem that voters can't "place" Obama -- or that Obama doesn't know his place? 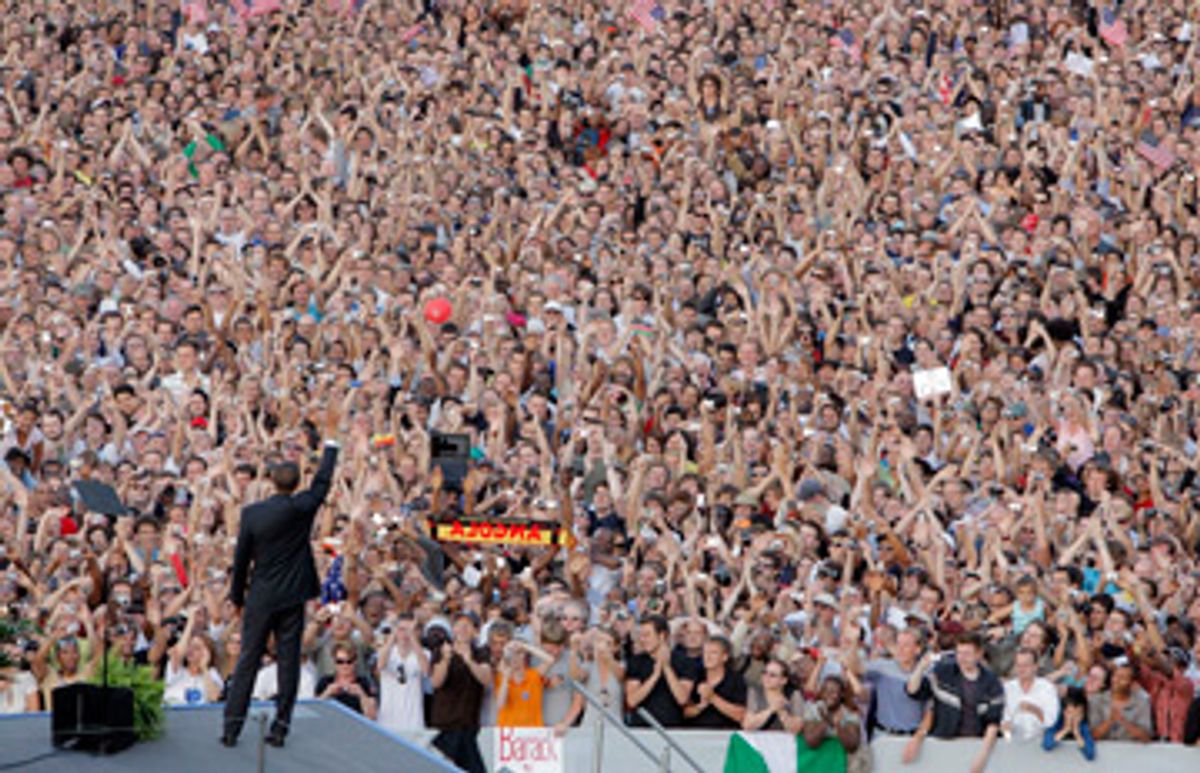 David Brooks has a disturbing column in the New York Times Tuesday, about Barack Obama as "outsider," and how that helps explain his small and ever-narrowing lead over John McCain despite the GOP's huge unpopularity this year. Brooks may be on to something, but typically, he stops short of insight and settles for trite Beltway truisms that favor the GOP -- in this case, insisting that, unlike all those other guys who've been presidents, Obama just doesn't seem like one of us; we can't quite "place" him. After this column, I hope Obama can get a permanent pass on the joke about not looking like the presidents on the dollar bills. He's not saying it's because he's African-American; it's because David Brooks says he's a "sojourner."

Brooks takes the label from the quotation Obama uses to open "Dreams From My Father": "For we are strangers before thee, and sojourners, as were all our fathers." He labels Obama a "sojourner" who never really settled after a boyhood in Hawaii and Indonesia, a coastal cosmopolitan in college (L.A. and New York) who somehow landed in Chicago. Someone else might see Obama's 23-year residency in Chicago (except for a stint at Harvard Law School) as putting down roots, but Brooks is obsessed with how Obama refused to really join the crowd when he got to the University of Chicago, the Illinois Senate, even the U.S. Senate. Papa was a rollin' stone, and so is Barack Jr., apparently.

According to Brooks, that makes him hard for the American people to "place," in contrast with other presidents who came from a recognizable place and "tribe." As Brooks puts it: "Andrew Jackson was a backwoodsman. John Kennedy had his clan. Ronald Reagan was forever associated with the small-town virtues of Dixon and Jimmy Carter with Plains."

How silly is all of that? Reagan's Dixon roots ran through Hollywood and a career as an actor, as well as a union leader turned union foe, a liberal turned conservative; a divorced ladies man turned right-wing family values guy. Part of his appeal, in fact, was his synthetic identity, which he had in common with most Americans. John F. Kennedy was elected in spite of his "clan" affiliation, not because of it; he barely defeated Richard Nixon in 1960. Journalists played along, for a while, with the re-creation of Jimmy Carter, landed politician, as Jimmy Carter, humble peanut farmer, and then turned on him.

Likewise, Bill Clinton was an amalgam of social and cultural influences: an authentic son of working-class Arkansas who saw himself (like Obama, in Brooks' formula) as a baby-boom product of the American meritocracy. But the Beltway didn't really play along with that Clinton self-invention: He was always white trash; his Georgetown degree didn't make him part of Georgetown (and Clinton had a self-destructive streak that let him collude in his exclusion). Finally, George W. Bush is a complete political confection: a rich-kid Connecticut Yankee dressed up like a cowboy, who pretended to be an oilman and failed at every job he ever had (except maybe baseball boss), including this latest. And yet unlike Clinton and Carter, Bush is still blessed to have journalists playing along with his confection of tribe and place.

In short, Obama has a lot in common with every president Brooks mentions, and then some. (It's interesting to note that, like Obama, Clinton, Reagan and Richard Nixon had absent or unreliable alcoholic fathers.) But only Obama is a "sojourner" who doesn't know his place. Sorry, that probably wasn't fair. Let's just say we don't know his place.

Still, I'm letting myself answer Brooks' column, instead of ignoring it as I usually do, at least partly because I think he's put his finger on something, something I'd rather not take in. This McCain stuff? The nasty jokes and ads about him being "The One" or Paris Hilton or Chris Matthews' boy toy? The playing of the "playing the race card" card? I think it's working. It's too early to fret about polling, and yet the trends in recent polls seem ominous.

And, quite honestly, my personal political radar is a little jammed: I've certainly criticized Obama for a few of the things McCain is trying to ding him on, particularly his supporters' rhetoric (which he occasionally seems to mirror) about his superiority and inevitability. I was concerned about his trip abroad backfiring -- whether because of missteps in Iraq, Israel or Afghanistan, or (more likely) adoring European crowds turning off American skeptics. And yet I personally admired every move he made on his trip. But it certainly hasn't given him a bounce, and may have hurt him. Obama supporters can say the criticism is unfair; they can call McCain "McNasty" and send e-mails about his latest gaffes and outrages -- did he really say his wife should enter a topless beauty pageant? Sigh -- but Obama may well have to work a little bit harder to make American voters comfortable with him.

Obama has plenty of time to open up the lead over McCain that conditions in this country, combined with McCain's "Bush III" campaign, suggest he ought to have. And yet I don't see events on the horizon I'm confident will do that. All evidence points to a safe but boring vice presidential pick; I'm not feeling Obama-Bayh, at all. I've always questioned the Invesco Field idea, which risks being another Berlin-like extravaganza: one that looks good to those of us who like Obama, and either leaves others cold -- or scares the bejesus out of them.

There's a lot to criticize in David Brooks' column, but it's a picture of what Obama is up against. Voters just tuning into the election won't see the pictures of a friendly, inspiring Obama in the snows of Iowa, but an image confected by the GOP attack machine and bored pundits, even some, like Brooks, who were friendly to Obama in earlier days. I'm not seeing evidence yet that Obama is ready for this phase of the campaign. Clearly, the days of adoring media coverage are behind him. A sojourner must always be ready to move on.