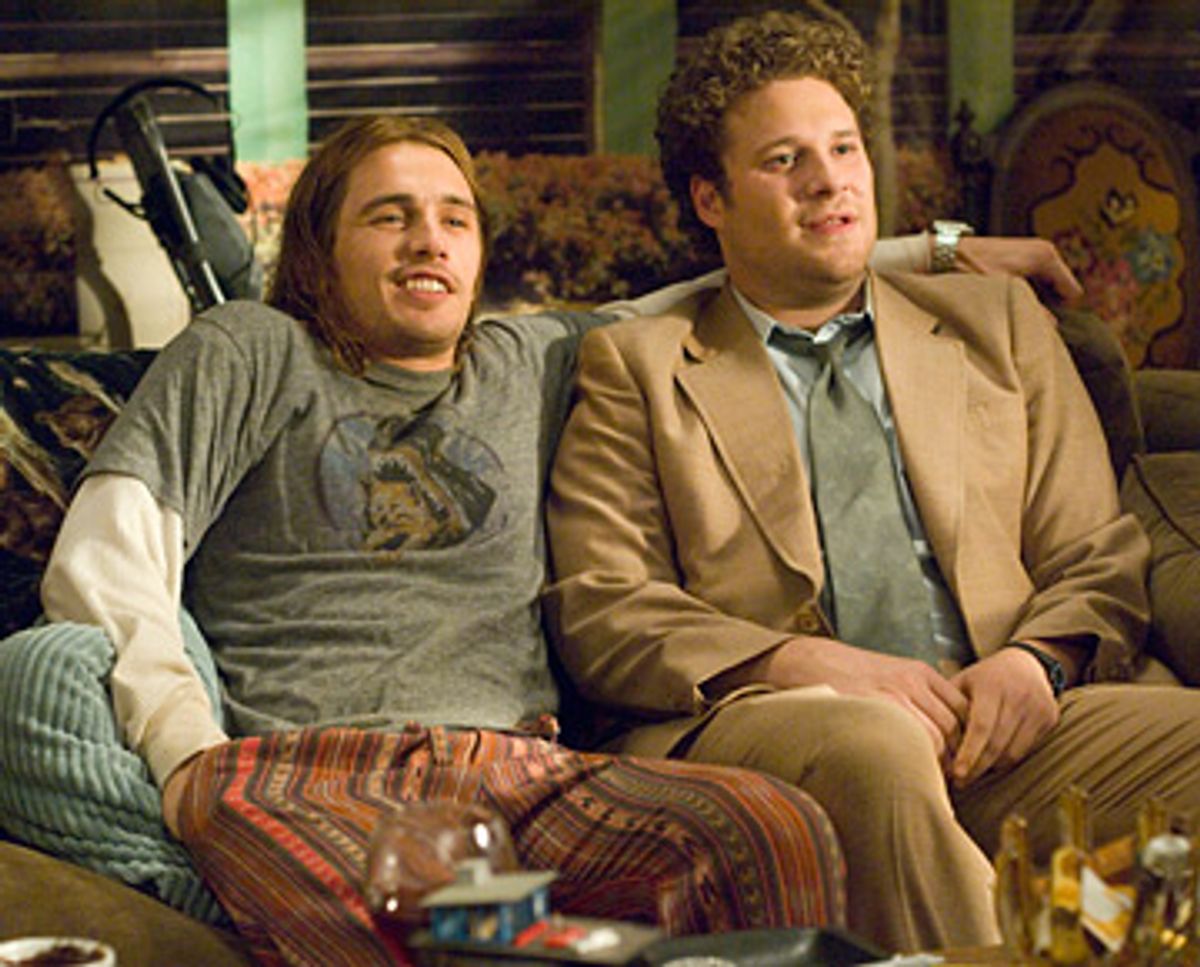 Like God, Judd Apatow is everywhere. But I'm not sure I would want even God himself to set the tone for every American comedy through the next half-decade at least, which is what Apatow, knowingly or otherwise, is doing. As fans of "The Cable Guy" and "The Larry Sanders Show" know, Apatow has been writing and producing comedies for a long time. And the two pictures he's directed, "The 40-Year-Old Virgin" and "Knocked Up," were, in addition to simply being funny, intuitively plugged in to the anxious mood of young America.

Apatow may have good instincts, but that doesn't mean he has to follow every single one, and the tedious stoner action-comedy "Pineapple Express" is a case in point. Apatow didn't write or direct "Pineapple Express"; he's merely one of the producers. But he did help conceive the story -- with Seth Rogen and Evan Goldberg, who co-wrote the script -- and, for the worse, the movie does bear his stamp: The picture is resolutely unhip and proud of it, which can be a good thing in the right hands or, in the wrong ones, just a gimmick. Nearly everything about "Pineapple Express" is a gimmick -- a slow-moving, unglamorous gimmick in which a number of terrific comic actors (Ed Begley Jr., Gary Cole and Rosie Perez, to name just a few) are treated as afterthoughts, while more limited performers, like Rogen, who plays one-half of the movie's stoner-hero duo, are allowed to soak up more of the spotlight than they deserve. It's possible that "Pineapple Express" is much funnier if you're totally baked. But the movie -- directed by David Gordon Green, the guy behind low-key (if self-important) indie hits like "George Washington" and "All the Real Girls" -- is so wayward and fuzzy that, for the unbaked, at least, there's very little pleasure to be had in trying to follow it. The thing is so desultory and aimless that it seems like work to try to laugh at it.

And who likes extra work? Certainly not any of the stoners I know. Rogen plays Dale, a lazy lump who works as a process server but who really lives to get high: When he's not slapping unsuspecting lawbreakers with summonses, he's sneaking out to his car for a joint -- or, occasionally, sneaking off to visit his girlfriend, Angie (Amber Heard), who's still in high school. The joke, funny in theory if not in execution, is that Dale's development is so arrested, he can't even be bothered to find an adult girlfriend.

Dale buys his dope from Saul (James Franco), a sweet-natured loner who's extremely knowledgeable, in a totally laid-back way, about the various varieties of pot. He's particularly proud of a baggie full of something called Pineapple Express. "It's almost a shame to smoke it," he tells Dale dreamily, his eyes focused on some far-off planet, even though he's sitting right inside his own living room. "It's like -- killing a unicorn."

Dale and Saul get involved in some unsavory shenanigans involving a drug honcho (played by Cole), an Asian crime syndicate (one of its members is the wonderfully deadpan Ken Jeong, who played the snippy OB-GYN in "Knocked Up" -- and who happens to be a doctor in real life), a crooked cop (Perez) and other assorted baddies. The pair's haplessness is supposed to be funny, but it wears thin quickly: By the time the movie dissolved into cartoony violence, I found myself grateful that at least something was happening.

In fact, the funniest thing in "Pineapple Express" may be the very end, during which Dale, Saul and a third buddy, Red (Danny R. McBride), recount the movie's events sideways, upside-down and in half-sentences -- in other words, in true stoner fashion. I also laughed, a little, at a hand-to-hand combat sequence in which Cole and Rogen briefly use fluorescent lights -- still plugged in -- as light sabers. It's the kind of completely stupid touch that you have to love.

But otherwise, there's not much worth watching in "Pineapple Express" -- except for Franco. I've always enjoyed watching Franco, at the very least for his teen-idol beauty. Here, with his stringy do and catfishy facial hair, he puts all that beauty under wraps. And somehow, he still glows. Franco's eyes are normally sparkling and expressive; it's a little shocking, at first, how glassy and zoned-out he makes them look here. But even though Franco has turned off all the lights, there's still somebody home in Saul: Even in the midst of the movie's lame ridiculousness, he always seems distinctly human. I'm not sure Franco is exactly funny, but he's so believable and so likable that he inspires a certain protectiveness. His Saul is the only character in the movie who makes any sense at all, and you don't have to be even half-baked to see it.