Singer-songwriter Conor Oberst was my guilty pleasure for years. But now that he has changed from angsty teen to Johnny Cash wannabe, why can't I enjoy his music? 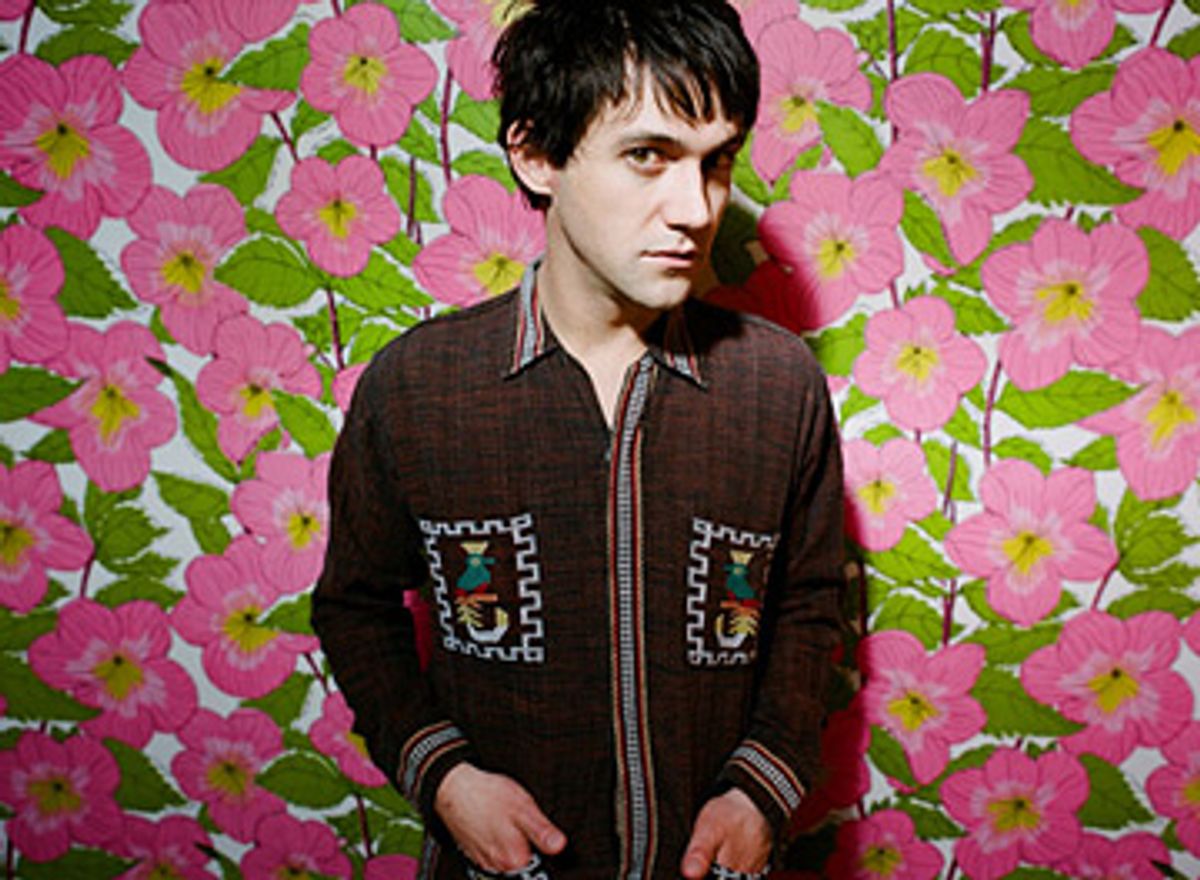 That's no small confession for someone who prides herself on listening to serious music. I've evolved from preteen grunge aficionado to high school punk fan to college indie rocker and finally become a somewhat omnivorous 20-something with ears for everything from noise-rock to tropicalia. As a woman who writes about music, I've worked extra hard to distance myself from teeny-boppers and groupies and drippy sentimentality.

This is all to say that nothing embarrasses me more than my secret love of Bright Eyes, once the drippiest act in all of indiedom. Primarily a vehicle for singer-songwriter Conor Oberst, whose new album, "Conor Oberst," came out this week, the ever-rotating group of musicians known as Bright Eyes formed when he was only 15. Unlike most celebrities who are supposed to have "grown up in the public eye" -- child actors, teenage pop stars, offspring of the rich and famous -- Oberst was the rare young artist who wrote his own songs and found a sizable audience while still in high school.

Much of that audience was made up of teenage girls. A few years younger than the now 28-year-old Oberst, I fit right into that demographic, catching on to Bright Eyes around the turn of the millennium. It wasn't his musical talent -- which consisted at the time of some rudimentary guitar arrangements -- that attracted me. And while I'll concede that Oberst's brooding, elfin good looks didn't hurt, it was his unmediated laments on loneliness and heartbreak that won me over. I reveled in Bright Eyes' earliest material, "A Collection of Songs Written and Recorded 1995-1997," "Letting Off the Happiness" (1998), "Fevers and Mirrors" (2000) and a raft of singles and EPs.

Even then I recognized Oberst's melodramatics for what they were, but couldn't deny that they affected me. When he feebly insisted, on "Kathy With a K's Song," "Love is real/ It is not just in long distance commercials," he vocalized my own desperation to believe it was true. The summer I turned 18, I sublet a sleeping loft in midtown Manhattan and his phrase "the coffin you call your apartment," from "Something Vague," permeated the space. The teenage Oberst, who attended a private high school just like I did, perfectly articulated the sorrow and angst that seem trivial to the adult world but feel epic to adolescents blessed with intact, financially comfortable families.

Of course, serious indie-rock fans -- a group I would have liked to belong to -- dismissed Oberst as a pretentious whiner, and cooler-than-thou critics at publications like Pitchfork grouped Bright Eyes among the most syrupy and hackneyed of emo bands. At first, even I joined in trashing him, so ashamed was I to admit to my male music-nerd friends that I was yet another girl who had fallen for Bright Eyes' self-pitying histrionics.

Around the same time, Oberst must have started to feel as embarrassed by his reputation as I was. Too smart and self-aware to stagnate among mediocre acts like Dashboard Confessional, he did some serious growing up between "Fevers and Mirrors" and his 2002 breakthrough, "Lifted, or the Story Is in the Soil, Keep Your Ears to the Ground." Less emotionally assaultive but just as personal as his earlier albums, "Lifted" embraced American roots music with an instrumental sophistication Bright Eyes had never even hinted at before. Songs like "Lover I Don't Have to Love" and "Let's Not Shit Ourselves (To Love and Be Loved)" diluted the extremes of emotion with the college-age apathy and detachment that I was also growing into. Oberst had learned how to stop being a teenage train wreck and start becoming a flawed but functional human being.

With its toned-down theatrics and newfound songwriting chops, "Lifted" launched Oberst's career. His audience widened beyond disgruntled high schoolers, and he delved deeper into country, folk and blues, expanded his lyrical repertoire to include politics (a move that earned him premature comparisons to Bob Dylan), and even unsuccessfully experimented with electronic music on 2005's "Digital Ash in a Digital Urn."

But just when it became socially acceptable to like Bright Eyes, I found myself falling out of love with him. Though Oberst's intimate lyrics couldn't have been more nuanced, surprising and uncannily accurate, his political stuff was painfully literal and disappointingly simplistic. His most famous protest song, "When the President Talks to God," sounds more childish than even his most narcissistic teenage material. "Does he ask to rape our women's rights and send poor farm kids off to die? ... Does he ever smell his own bullshit, when the president talks to God? I doubt it," Oberst rasps, in an obvious and futile attempt to evoke Dylan, who would surely shudder at such graceless lyrics. By the time "Cassadaga," another foray into lefty dogma, came out last year, I could barely bring myself to listen to it.

As the first widely distributed album he has recorded under his own name, "Conor Oberst" must be yet another stab at a new beginning. I had hoped it would herald a return to introspection -- a close-up portrait of the artist post-"Lifted." Though Oberst thankfully obscures or dispenses with the grating political appeals, the persona he replaces them with is almost as annoying.

Oberst's rootsy style has begun to bleed into his lyrics, an affectation that doesn't work for someone who wrote an entire song ("Loose Leaves") about prep-school summer vacation. His compositions are about what they've always been about (isolation, memory, love and lack thereof, fear of death), only Oberst isn't singing in his own voice anymore -- he's weaving together scraps of Bob Dylan and Neil Young and Johnny Cash. He's trying to sound as old as the hills when the main virtue of his lyrics has always been their youthfulness.

It isn't that I always crave confessional music. Some of my favorite artists, such as David Bowie, have made entire careers on assuming and casting off personas. Bowie's kind of artifice works, though, because he's aware of it, and his talents have more to do with character creation than introspection. And at a moment when the indie buzz band of the year, Vampire Weekend, is both exploiting its upper-crust image and disguising it under layers of filched African pop, it's easy to see why Oberst may be ambivalent about his own, privileged voice. But nothing reeks of entitlement like the unearned authenticity he attempts to assume in lines like, "And it's such a long way back/ To all the fun I had/ When nothing ever seemed to bother me/ But what can you do?/ Sleep 'neath the stars and toil in the sun" and "There's nothing the road cannot heal."

Oberst is so determined to show us that he's no longer a self-pitying teenager that he has replaced all semblance of self with the image of a smooth-talking drifter who dispenses cowboy clichés. Only at rare moments -- such as on "Danny Callahan," a song about a boy who dies of cancer, and "Lenders in the Temple," which pleads, "I'd give a fortune to your infomercial/ If somebody would just take my call" -- does the sensitive, perceptive lyricist make an appearance.

This is frustrating because, musically, the new album may be Oberst's best. Backed by the Mystic Valley Band, which includes several Bright Eyes alums, he balances an impressive variety of moods and styles, from sad, tranquil guitar ballad ("Milk Thistle") to carefree foot stomper ("NYC-Gone, Gone") to loud-quiet-loud singalong ("Get-Well-Cards"). In fact, I was so enchanted by Oberst's melodies it took me a few listens to realize how shallow I found his lyrics. And though I'm not about to throw "Conor Oberst" out the window, it won't join his early releases in the relatively large canon of records that have personally impacted me.

For a few years Conor Oberst was the older brother I never had -- he experienced everything first and left me a detailed map of the empty apartments, serious breakups and unquenchable longings that define late adolescence. These days, my anxieties involve repaying school loans, carving out a professional life and fitting all of my responsibilties into roughly 17 wakeful hours a day. While these concerns are surely less romantic than what preceded them, I can't help wondering what Oberst would have to say about early adulthood. If he has half the insight and descriptive power at 28 that he had at 16, I can only hope the dust and tumbleweeds clear so we can hear what's really on his mind.