Talking to Norfolk servicemen's wives, the potential first lady hopes to prove her empathy -- and the corrosiveness of the Iraq and Afghanistan wars -- in a battleground state's most contested area. 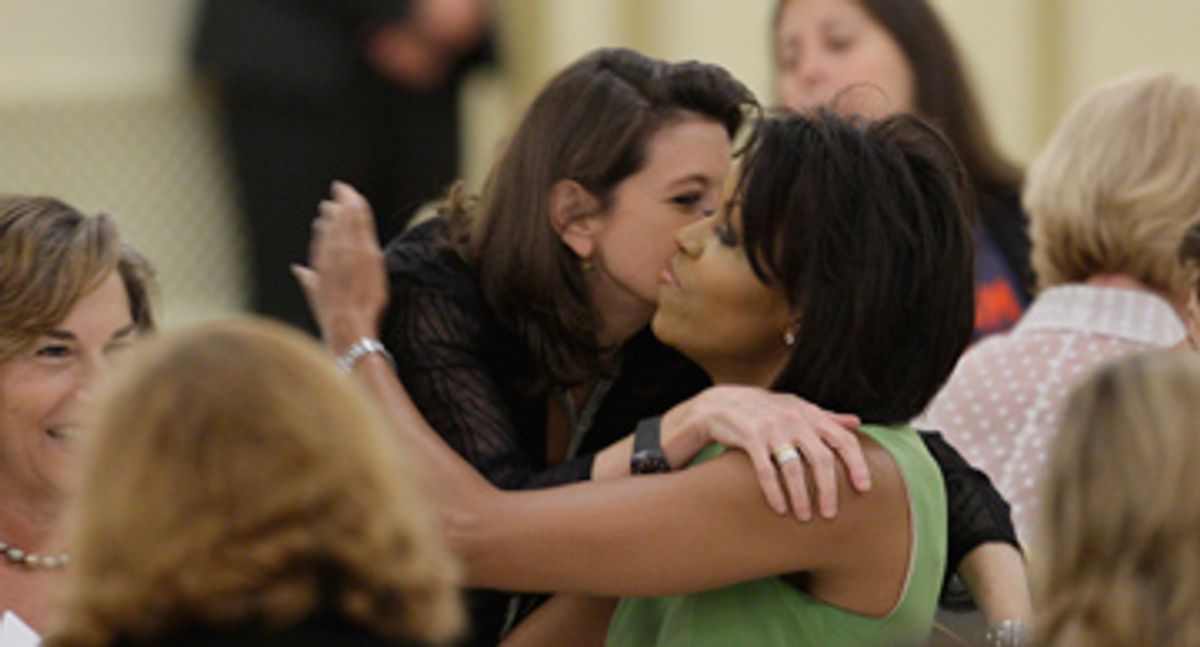 Amanda McBreen's 82-year-old father is a World War II veteran who's in danger of losing his house to pay for long-term care. Her 80-year-old mother-in-law is in the hospital with a broken leg. McBreen is house-hunting in Norfolk, Va., while her Marine Corps husband meets with his superiors at the Joint Central Command to get details on what may be his ninth military deployment. Where? They don't know yet. That's part of the problem.

"I have three children, a cat, a hamster. And I may have two parents moving in with us. It's not likely to work this way."

Smoothing her hands over her brightly colored miniskirt, McBreen sits on a small stage with a handful of other military wives, some local political leaders, more than 50 television, print, Internet and radio reporters -- and Michelle Obama.

The wife of presumptive Democratic presidential nominee Barack Obama is holding a round table here at Old Dominion University -- in the heart of conservative America, just down the road from the world's largest U.S. Navy base, in a state that last supported a Democrat for president in 1964. But this year, Virginia may be up for grabs, and the Democrats are pushing hard.

It's difficult to overemphasize the appeal that the presumptive Republican candidate, John McCain, may have in this part of the state. The ex-Navy pilot and bona fide war hero should be a natural to win this military stronghold. But the Obama campaign believes it may be able to sway the hearts and pocketbooks of the military families living on base.

Democrats have already made headway with a very popular Democratic governor. And if the party could somehow flip Virginia from red to blue in the presidential election, well, it would be a major coup.

That's why Michelle Obama is sitting onstage in Norfolk, and that's why the event features almost more media members than military wives -- Obama may be listening to military spouses, but she's being seen by all of Virginia.

"Washington has talked a very good game about family values, but Barack believes that we have to have policies that actually value families, especially our military families," she says, and with that she holds up a slick, square, navy blue brochure.

"Today I've brought along copies of a new brochure that we put together that talks about Barack's plan for supporting military families. See?" She squints at the blue square she's holding aloft, "It's pretty, isn't it? And it's for Virginia, too."

The audience cheers at the shout-out and the disarming way Obama seems to be both part of, and apart from, her campaign machine.

It could be tough for Michelle Obama to connect to these military women. She is, after all, a Harvard-educated lawyer and Princeton grad. But listening to stories of missing medical paperwork and moving from base to base, Obama seems less Ivy League businesswoman and more mother and wife, a woman whose husband's job is consuming her entire life.

It has been a long, hot summer for Michelle Obama. First, the man who baptized her two children and officiated at her wedding, pastor Jeremiah Wright, found he liked hearing himself talk about black America more than he wanted a black American to become president. Then came the scuffle over her statement about being proud of America. (The actual line was: "For the first time in my adult life, I'm proud of my country because it feels like hope is finally making a comeback." Conservative pundits focused on the first bit and ignored the second.) New York Times Op-Ed columnist Maureen Dowd complained that Obama's jokes about her husband's snoring were no way to the keep the campaign's "Camelot mystique."

So Michelle Obama tried to do the first lady thing. She gamely put on a sundress and made chitchat with the women of the daytime talk show "The View."

But just as the campaign's image of a softer Obama began to take hold, the now infamous New Yorker cartoon cover portrayed her "fist-bumping" her husband, sporting an Afro, a scowl and an AK-47.

The woman appearing at this Virginia university couldn't be further from that caricature of an angry black militant. After her opening remarks, Obama nestles into one of the comfy chairs set up onstage. Popping open a bottle of water, she looks at the half-moon of military wives arranged around her and says, "OK, who's going to go first?"

The military wives sit blinking under the klieg lights of the television cameras, many crumpling tissues in their hands as they tentatively lay out their problems. And Obama is right there with them, commiserating over all the little things, like missing hamsters -- and the big things, like the fact that their husbands may never come home. This cruel question mark hangs over all the women's comments, making it hard for them to say that anything's wrong, because how can you fret over yet another deployment when others never made it back from the first one?

"Trust me. Barack and I know that we're blessed." Obama sweeps a strand of her chin-length bob back behind her right ear.

"That is what most Americans, most military spouses, are saying. That's our tendency in this nation, to say that I am blessed. Because we are. In so many ways we're blessed to live in this country. We're blessed to have the opportunities that we have. But sometimes things just still aren't right."

Obama gives a weak laugh. "And, ah, we should be able to talk about that."

Michelle Obama is walking a tightrope with both audiences -- the carefully selected men and women in the room and the millions of Americans judging her every move. How do you criticize a military system without criticizing the military? How do you say that America needs to address racism without calling America racist?

The solution should be to put Obama front and center. She's friendly, personable. She hugs people. The round table feels more like a taping of "Oprah" than a campaign event, and not just because of the African-American woman at the center of it all, but more because it's women sitting around, hashing out the difficult details of having a job, a husband, kids and a house.

What Obama's not so good at is the unblinking eye of the TV camera. Her humor is heartfelt -- but can be sarcastic. While Bill Clinton won over crowds with his "I feel your pain" empathy, Michelle Obama is more likely to get indignant. She's the friend who slams her hand down on the table with an "I can't believe they did that."

It works in person. But without context, it can sound like complaining.

Possibly that's why Obama's campaign has organized these round-table talks with military wives. It would be hard to find a group in America with more right to complain than the spouses of the men and women serving in the overburdened, underfunded U.S. military.

This round table is the third event on Michelle Obama's listening tour. Previous round-table discussions took place in Fort Bragg, N.C., and Hopkinsville, Ky. The program is called "Blue Star Families," and the Obama campaign Web site has posts from military personnel and their families about why they're supporting the Democrat.

Obama's campaign is counting on the deep sense of disenchantment service members and their families in Norfolk have with repeated and drawn-out deployments and the concurrent wars in Iraq and Afghanistan.

"These are all women up here today, but we could have packed this stage full of men who are military spouses," Obama says.

"Too often it seems like you're doing it all on your own, holding it together," she adds. Obama says that given all the challenges that face ordinary folks with housing and healthcare and higher prices, "it makes it even more amazing to me to understand how you do it."

"When the military goes to war, or deploys at sea, their families go with them," she says.

The handpicked audience reacts with cheers and applause time and time again during Obama's roughly 20-minute opening remarks, with the loudest ovations for the details of her husband's plan to redefine the U.S. military's plans overseas and provide more regularly scheduled troop deployments with more time at home.

She also speaks about her husband's grandparents -- the white ones: the grandfather who enlisted after Pearl Harbor and went on to march in Gen. George Patton's Army. "And his grandmother worked on a bomber assembly line while he was gone. And his mother was born in Fort Leavenworth."

Obama notes that it was the G.I. Bill that sent Barack's grandfather to college and a loan from the Federal Housing Administration that helped the family buy a home.

Obama didn't delve deeper into her husband's family background, but it's often discussed by others in the same breath as the governor of Virginia -- Tim Kaine. The Democrat shares family ties with Barack Obama, whose grandfather, the one who marched with Patton, comes from the same small Kansas town, El Dorado, as Gov. Kaine's mother. The connection comes up every time Gov. Kaine's name is mentioned lately, because he's on Obama's shortlist for potential vice presidents.

Kaine could shore up some of Obama's perceived weaknesses. His race for governor featured some surprising wins in traditionally Republican, working-class parts of this Southern state. He's also Roman Catholic, and speaks fluent Spanish.

But for now, all eyes are on Michelle. Earlier in the day she visited a preschool and read a children's book to about a dozen schoolchildren. In the evening she attended a fundraiser attended by Gov. Kaine and his wife that featured Virginia native Bruce Hornsby.

But what dominated the noon news and the evening newscasts was Obama sitting quietly nodding and listening to the troubles of military spouses.

Tammy Linton is a 34-year-old Air Force veteran whose husband spent two tours in the Middle East. Despite all her training as an operating room nurse, Linton says her military commanders couldn't supply even basic child care for her 2- and 8-year-old boys. "I'm a registered nurse and got a position on the trauma team and I had to give up that job because I couldn't get child care."

Elaine Guishard's husband is a commissioned officer in the U.S. Navy. The mother of two teenagers is also a breast cancer survivor who has no assurances that her healthcare will continue if her husband leaves the service.

Beth Robinson is pregnant, has an 18-month-old toddler and has multiple sclerosis. Her husband, and high school sweetheart, has 13 years in the U.S. Marine Corps. He served in Operation Iraqi Freedom in 2003, and has returned to Iraq twice and Afghanistan once since 2006. Within the next year, he's likely to be deployed again to the Middle East.

To a woman, their struggles focused on housing, healthcare and basic child care -- all topped off with a big dollop of deployment. "I don't think that many Americans that are not in the military understand just what you've laid out," Obama tells the women. "And that's one of the reasons we're doing this. I don't think people understand all that goes into serving the country, and going to war."

"What you're asking for, it isn't extra; it's the basics that you need to survive. And we should be at the point where you're not just talking about survival, you're talking about thriving. We need families that thrive."

Aries Keck is the co-author of "Einstein A to Z". She lives in Maryland and is a contributor to NPR's "Marketplace."