Some love the games for the competition. I love them for the Opening Ceremonies kitsch. Bring on the belting divas, plush bears and dancing cows! 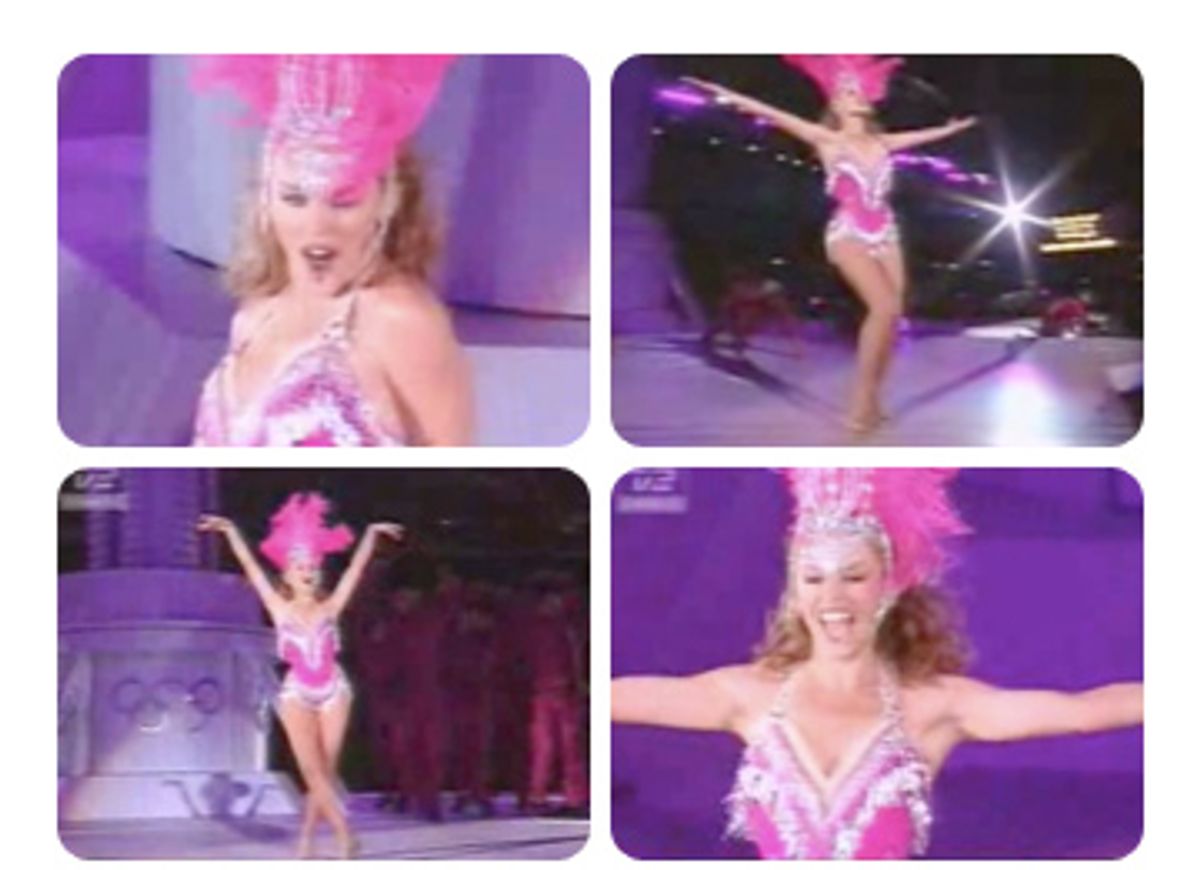 When the Olympics kick off in Beijing, they will do so in the most politically charged atmosphere in recent memory. Many of the world's leaders, including British Prime Minister Gordon Brown, are boycotting the Opening Ceremonies, and much has been made of China's environmental problems, its human rights record and its restrictive policy toward the media. But Olympics organizers hope that, when the games' Opening Ceremonies begin, viewers will stop thinking about all those unpleasantries (Tibet, who?) and gaze in wonder at the oversize Ming Dynasty-themed props.

Of our many entertainment extravaganzas -- the Super Bowl halftime show, the Academy Awards, "America's Got Talent" -- nothing can outdo the Olympics Ceremonies for sheer bat-shit craziness. Every two years, the ceremonies offer a chance to see what happens when a group of producers, choreographers and float builders who have nothing to do with athletics are given millions of dollars to turn one of the most ascetically straitlaced events in the world into a Vegas stage show. The result is always over-the-top, sometimes offensive, and, as will likely be the case in Beijing, highly political.

China, as we've often been reminded, has a lot riding on these games. Organizers have spent $100 million on the Opening Ceremonies, which will feature approximately 20,000 performers and 33,000 fireworks (including thousands of "smiley face" rockets). When footage of the Beijing rehearsals leaked onto the Internet several days ago, it showed an impressive combination of kitschy set pieces and trapeze acrobatics -- which suggests that while Beijing's ceremonies may be the most expensive ever created, they'll also be sticking to the same basic formula that has made previous ceremonies so much fun to watch.

There's something genuinely magical about every one of these ceremonies, partly for the obvious clichéd reasons: the world coming together for the love of sport, the celebration of pure human achievement and the thrill of international brotherhood. But the Olympics ceremonies are also that rare moment when two completely different spheres -- the arts and athletics, the showy and the self-effacing -- come together for several hours of dazzling pageantry. The two don't always fit well together, but therein lies part of the fun. It's like inviting the high school football team to a drama club party, and watching the sparks fly.

For me, the Opening and Closing Ceremonies have always been the most exciting part of the games. I know I'm not alone in feeling that way -- they regularly garner the highest television ratings of any part of the Olympics -- though my reasons are probably more personal and embarrassing than most. I've been involved in sports since I was a kid: first swimming, then running, then rowing. I had friends who went to the Olympics, and many more who aspired to, and every two years, my family would treat the games like Christmas. Competitions would be recorded on multiple VCRs, watched, and rewatched and rehashed over dinner.

But when I reached the age of 15, two things happened: I began taking my sports more seriously -- joining the provincial rowing team, practicing a dozen times a week -- and, more important, I started listening to Abba. By the time 12th grade rolled around, I was driving to early-morning practice while singing along to Cyndi Lauper. While I loved sports -- painful, character-building sports -- it was increasingly clear that I didn't quite fit in. I eventually figured out why (it rhymes with "hey"), but at the time, I thought I was just a teenage jock with a healthy appreciation for sugary pop music.

So when I snuck down into my family's living room to watch the Sydney Closing Ceremonies, and Kylie Minogue, dressed in a pink showgirl outfit and headdress, began dancing around the Olympic Stadium while singing "Dancing Queen," I fell in love. How could something so contextually inappropriate feel so right? Although, at the time, I wasn't ready to reconcile my jockishness with my love of camp, at least I now knew that every two years the Olympics Opening Ceremonies would do it on my behalf. And I haven't missed a ceremony since.

As strange as it seems, the ceremonies weren't always the spectacle they've now become. When the first Olympic Games took place in Athens, in 1896, they kicked off demurely, with music and a few speeches by dignitaries. But in the following decades, the games made their way to London, Stockholm, Sweden, and Antwerp, Belgium, and picked up pageantry as they went. In 1908, athletes began marching behind their flags. In 1920, the Olympic flag, with its five rings representing five continents, made its first appearance and the athletes began declaring the Olympic oath, promising to abide by the rules of sportsmanship. The 1928 Amsterdam Games saw the first lighting of the Olympic flame -- and the beginning of one of the greatest Olympic traditions of all, the Opening Ceremonies dance routine.

As the games have grown, it's no secret that they've become about much more than sports. During the Cold War, they were a battleground over politics (you boycott me; I'll boycott you). But they were also a chance for the host country to show off its achievements and claim its spot on the world stage, and, in the last two decades, with the growth of corporate sponsorship, they've become a moneymaking venture for corporations and the International Olympic Committee.

All of these factors have led to the transformation of the Opening Ceremonies into a multimillion-dollar showpiece -- aided and abetted by the growth of television. The IOC expects to earn $2.5 billion from broadcasting deals alone between 2005 and 2008. "Television is the major player ushering in the pageantry," says Kevin Wamsley, an Olympics historian with the University of Western Ontario. "It became part of the entertainment package that is the Olympic Games."

And how better to turn a noble celebration of sport and self-sacrifice into the kind of spectacle that will attract several billion television viewers than by having spandexed performers spell out "Welcome" with oversize beach balls. According to Wamsley, the ceremonies' propensity toward mass performance goes back to a 19th century tradition of large-scale outdoor exercise, common in Germany, Denmark and Sweden. In recent years the pageantry has also taken on some more pretentious Cirque du Soleil-esque qualities -- albeit with a prominent nationalistic streak. "There's a strong political message that's usually embedded," says Wamsley.

Most include a retelling of the host nation's founding myths -- often in a hilariously fragmented and abstract form. When a large birdlike contraption ran across the stadium during the Atlanta Opening Ceremonies in 1996, NBC's on-air hosts blurted out: "My best guess is that this is about the Civil War." My favorite bit of weirdness from the Sydney Olympics was its immigration-themed song and dance number, in which color-coded immigrant groups converged into the middle of the stadium. Europeans, for some reason, were dressed like green Martians, while people from the Americas were clad in red and doing the mambo. The Canadian Broadcasting Corp. anchor seemed amused: "Here come the Americas, this is you and me."

But making sense of the symbolism and randomness is all part of the fun. The organizers of the 1980 Moscow Olympics put hundreds of schoolchildren in plush bear costumes and made them do a vaguely threatening square dance. They also had dozens of schoolgirls complete a dance routine holding large blond dolls. The 1988 Seoul ceremonies included hundreds of young boys using their hands and heads to break wooden boards. Torino had flaming roller skaters. Salt Lake City had the Dixie Chicks.

Each opening ceremony, as I've learned, has its own vibe: Los Angeles was kitschy (jet packs, Gershwin), Torino was pretentious (latexed acrobats, dancing cows), Athens was classy (floating statues, dioramas), and Atlanta was like the Golden Globes on meth (shiny fabrics, Celine Dion).

I've stopped playing sports and reluctantly transitioned from participant to spectator in recent years, but my appreciation for Olympic pageantry has never wavered. And though I stopped being embarrassed by my frothy musical tastes a long time ago, each ceremony still strikes a special chord in my heart.

As it turns out, you don't really have to be a jock to appreciate the Opening Ceremonies, and in a sense, they're more successful in creating a sense of international fraternity than the games themselves. Their appeal, after all, is meant to be universal. Not everybody cares about the pentathlon or Mike Phelps, but everyone -- from the Swiss housewife to the Japanese hipster -- wants to feel part of something bigger, and we all appreciate a good show, especially one with dancing cows.

So this Friday evening (the ceremonies will air on NBC at 7:30 p.m. EDT) I know what I'll be doing -- crawling onto my couch, and spending four blissful hours being alternately baffled, amazed and moved by Beijing's Opening Ceremonies. I'll be doing so in the company of billions of other spectators, comforted by the knowledge that everyone, even the elite athletes of the world, sometimes need a little bit of fabulous.