Why watching the Olympics is torture for me

As a former top gymnast, I know what it feels like to stand on a 4-inch-wide plank, carrying the world on your 16-year-old shoulders. 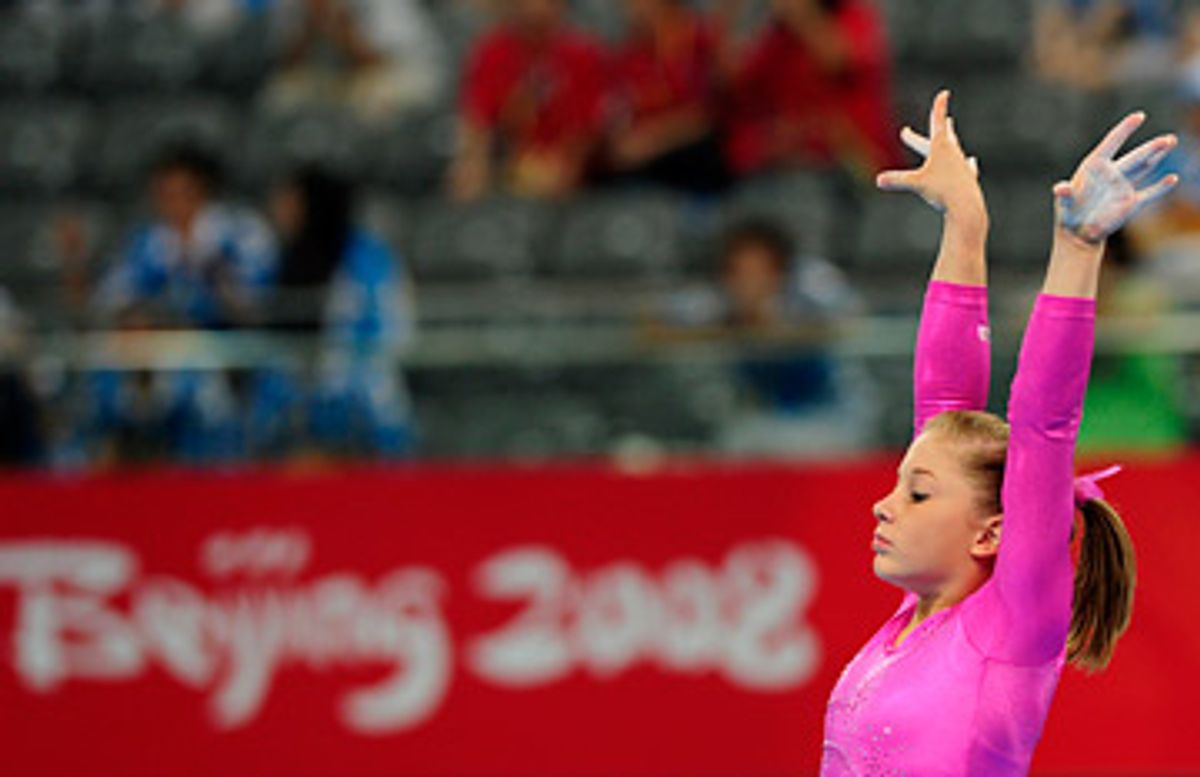 Shawn Johnson of the U.S. practises on the floor during an artistic gymnastics training session at the National Indoor Stadium ahead of the Beijing 2008 Olympic Games August 7, 2008.

Everyone's excited about the Olympics. Marketing and endless hype have all good Americans whipped up into a frenzy of competition gluttony and "Go USA" zeal. And of course it isn't all hype: There's a lot to get excited about. Will 41-year-old Dara Torres strike gold in her record-breaking fifth Olympics, making 40 the new 20 once and for all? Will Michael Phelps become the winningest swimmer in history? Will the U.S. women's gymnastics team beat the Chinese, a repeat of the last World Championships? Or will the Chinese topple America's darlings, Shawn Johnson and Nastia Liukin, proving their country's mettle and worthiness? How will the U.S. men's gymnastics team perform without their leader, Paul Hamm, the 2004 Olympic champion? Who will be crowned the World's Fastest Human after the most anticipated 100-meter race in years? And lest we forget, who will test positive for steroids?

So there's no shortage of drama in Beijing. But I confess I'm deeply ambivalent about the Olympics. To tell the truth, I usually don't watch them at all. As a former internationally competitive gymnast, I find them too emotionally complicated -- exhilarating, depressing, disappointing, maddening, transcendent, draining. I get enough ups and downs in my own life -- I don't need to borrow others'.

For 20 years, I ran as far away from the world of gymnastics as I could get. I didn't follow the sport. Then this year I published "Chalked Up," a memoir about my life as a gymnast in the 1980s, and that world caught up with me again. Curiosity, and maybe something more, has gotten the better of me. This year, I'm going to watch -- even though I know it's going to hurt.

Over the years, I've asked myself why I haven't watched the Olympics. Is it regret about my own athletic career? Although I was a national champion and an Olympic hopeful, I walked away from the sport just a month before the trials for the 1988 Games. But that's not the reason. I've made my peace with my decision. The reason is it's just too painful for me.

As a former athlete, I understand what it means to compete at an international level in a way an armchair fan cannot. I know what it feels like to stand alone at 16 years of age on a 4-inch-wide plank called a balance beam, carrying the heavy burden of personal and parental expectations, not to mention the unthinkable heft of a coach's dreams and a country's misplaced political fervor. I know what it's like to stand before that beam, legs shaking, throat closed with trepidation. To feel choked with the fear of letting people down, not least of all yourself. To have your mind race with visions of a wasted half-lifetime of brutal training caused by a split-second misstep -- a wobble, a fall from the bars, a foot out of bounds on the floor. To banish that dastardly vision to make way for one of victory. And then to go. Despite the nerves, the shakes, the hunger, the million possible outcomes. To enter the tunnel and commit, whatever the result.

I know what that is like, and it is nearly crushing for me to watch others go through it. Especially 16-year-old girls -- some of them children, really -- like those who will compete in "women's" gymnastics.

And there's another reason I've avoided watching. Someone loses every event, every race, every bout. In fact, many lose and only one wins. My heart breaks with the devastation of the once favored, now an also-ran. I know that the athlete who places second, or 10th, or last will replay the game or race or routine over and over in her head, praying for a different outcome, feeling the prick of shame each time. If she was a contender, a star, she may play this in her head for years or even decades to come. She'll be endlessly subjected to her moment of failure, an undeserved punishment for a silver medal or perhaps failing to medal at all in a contest against the very best in the world. This is what I think about when an athlete falls behind, whether she's American or not. I have a hard time celebrating the winner, because my heart clenches for all the others whom the world likes to call losers. Maybe I'm too sensitive, but I just can't help it.

So during the games I will pray in an entirely nonreligious way. I will watch with fingers crossed and pulse pounding. I will hope against hope that no one leaves on a stretcher as I did at the 1985 World Championships, in which I broke my right femur falling off the uneven bars on my last event of the competition. I'd done that trick thousands of times. A split second of misplaced concentration combined with equipment slightly different from that I'd trained on resulted in a pain so gut-wrenching it still induces nausea more than two decades later when the memory flashes through me.

Which brings me to the third and final reason why I haven't tuned in throughout the years. Gymnastics is an impossibly dangerous sport, posting injury rates among young athletes that rival football's. Even those who are the best can fall, with sometimes tragic consequences. In 1987, at the World Sports Fair in Japan, Julissa Gomez missed a foot on the vault, crashed into the horse and broke her neck. She was paralyzed from the fall and later died from complications. But because there is five-star entertainment value in watching these darling pixies with glow-in-the-dark smiles, we forget the inherent risks. Their taped-up ankles should remind us, but we get swept up in the glory of it all. As someone who's faced it, I know the danger in this sport is ever-present. I can't watch without flinching.

But this time I've decided to watch. I know it's going to be hard, but I can't resist. I know I'll get swept up in the thrilling excitement of it -- a nearly perfect uneven-bar routine of unimaginable difficulty, an impossible to even conceive of vault with uncountable twists and flips. I will ooh and aah, clap and cry, get sucked into the narrative of the world's oldest Olympic swimmer and the world's youngest Olympic gymnast. All the while, I'll be on tenterhooks, peeking through covered eyes, yearning for safe finishes and no injuries. Most of all, I'll cling to the impossible fantasy that all the athletes will take home a medal -- or at least feel like they do. I know it's a Pollyanna, peewee soccer, "everyone's a winner!" wish, and one that is contradicted by my own competitive nature. But I'll wish it just the same. Go everyone!