How did Team USA gymnastics get so good?

What happened since the mid-1970s that turned the women's gymnastics program into the tour de force it has become? The Karolyis happened. 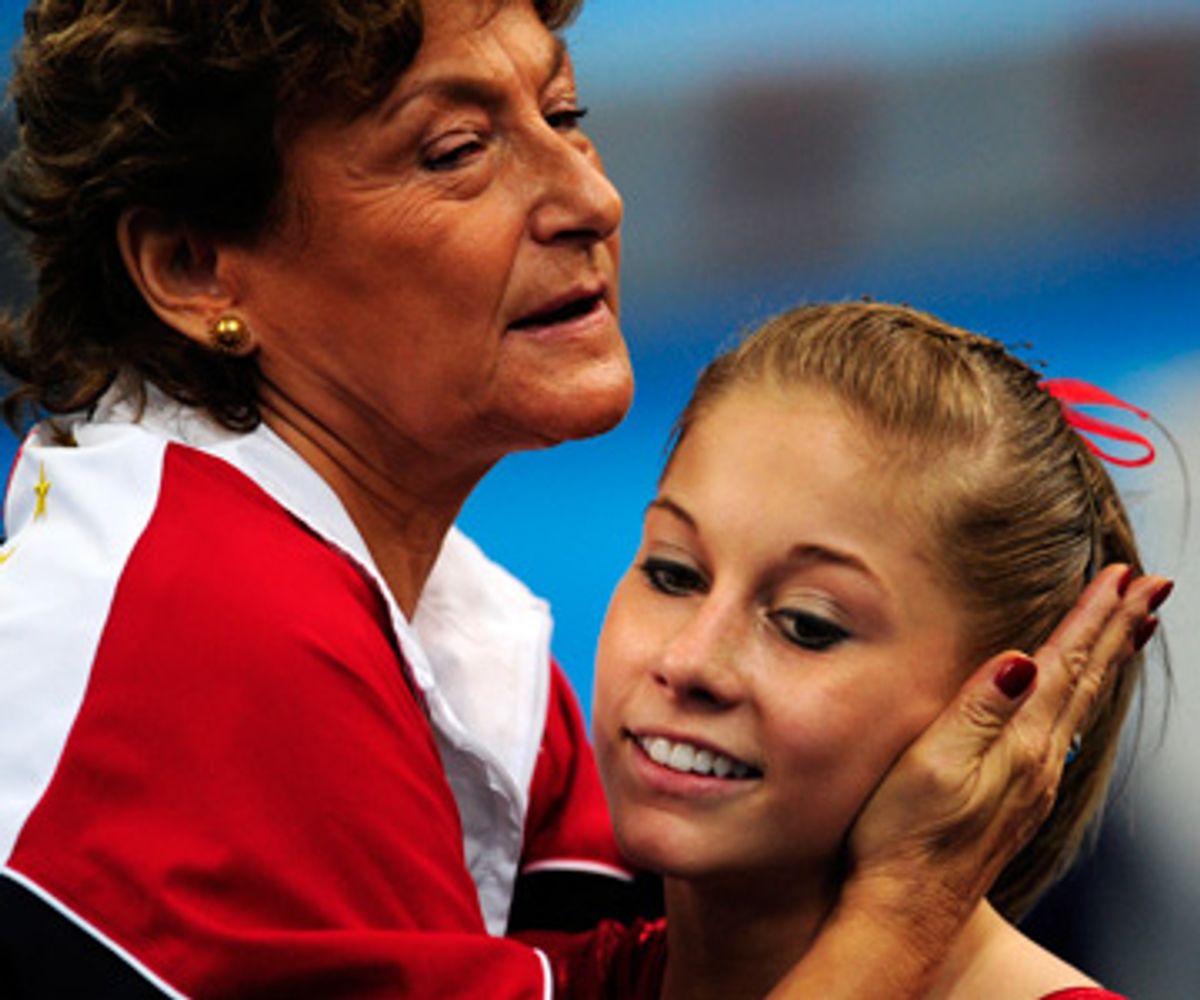 Shawn Johnson of the U.S. (right) is congratulated by Martha Karolyi, coordinator of the U.S. women's gymnastics team, after Johnson's routine on the vault on Aug. 13.

After the U.S. and China split the last two World Championship team titles, the Chinese female gymnasts proved their mettle by taking the team gold in Beijing. USA Team captain Alicia Sacramone suffered two disappointing falls in the team finals, but Nastia Liukin and Shawn Johnson came through with stellar performances and secured the silver medal.

Two decades ago, this was an unimaginable feat for Team USA. Now it's considered a relative disappointment. How did USA gymnastics get so good?

Cathy Rigby, a member of the 1972 Olympic Team, is one of the best and most widely known American gymnasts in history. She was the darling of American audiences between 1968 and 1972, so much so that she was able to parlay her fame into a Broadway career and promoter of Stayfree Feminine Napkins. Despite Rigby's favored status, the 1972 team failed to place in the games and no individual medals were won.

In 1976, again no medals. 1980 was the boycott, of course, and in 1984, along came Mary Lou Retton. While she famously won gold in the all-around and the team took silver, there was wide speculation that the U.S. would not have ranked if the Eastern Bloc countries had attended, despite Retton's stellar, heart-winning performance. The Soviets had been the reigning champions since 1972, and their neighbors in East Germany, Hungary and Bulgaria were also forces to be reckoned with. Only the Romanians showed up in Los Angeles, and they bested the U.S. in the team competition.

In 1988 the team didn't medal, but in 1992 USA gymnastics started to heat up. While the team didn't capture a medal in Barcelona, Shannon Miller won second in the all-around with all major country contenders in attendance. By 1996, things further accelerated. Martha Karolyi coached the team to gold in Atlanta with Shannon Miller at the helm.

Dominique Moceanu was the 14-year-old darling from the U.S. who competed for the 1996 "Magnificent 7" team in Atlanta. She's recently called for Martha Karolyi's removal as the national team coordinator, citing mental and physical abuse when she trained at the Karolyis' as a girl. In the Los Angeles Times, Moceanu said, "I never, ever objected to hard work. What I objected to was Martha grabbing me by the neck, shoving my face into the phone and telling me to call my parents when I hurt my neck in practice. I objected to being told to jump onto a scale in front of the 1995 world championship team, of being forced to do 16 uneven bars routines in a row by Martha. I was completely embarrassed by Bela in front of the 2000 national training team at camp. He completely belittled me and my weight, singled me out and made me feel very small." Without Dominique on board, Martha led the Athens 2000 team to victory with a silver team medal and a gold medal from Carly Patterson in the all-around.

Rodica Dunca, a former Romanian national team member (1978-82), has spoken out about the Karolyis' training methods as well. She described the training camps under Bela as a "concentration camp. Or even a prison." She told World Gym Rank, a gymnastics blog, "I think you can say that hard isn't the word in conditions where you were satisfied if you got away with a beating."

Another former Romanian gymnast, Emilia Eberle, who now goes by the name of Trudy Kollar and coaches in Sacramento, Calif., told NBCOlympics.com that "I do have my big box of dark secrets that pretty soon it is going to come out." Her refusal to talk about her experience suggests she may have been mistreated by the Karolyis as well.

What happened since the mid-1970s that turned the U.S. women's gymnastics program into the tour de force that it has become? The Karolyis happened. They brought their Romanian-style coaching tactics that elevated Nadia to fame in the 1976 Olympics to our shores. At first, they opened their own club and coached their own girls in Houston. The famed Karolyi ranch was notorious for abusive training sessions and name-calling among the competitors of the 1980s. Which makes it a bit hard to believe that behind closed doors Martha encourages the 2008 team's Bridget Sloan with "you can do it, just believe" cheers to offset the athlete's tendency toward self-doubt, as reported by NBC's Tim Daggett.

Around 2000, the Karolyis transitioned from club coaches with Mary Lou Retton and Kerri Strug on their roster of American superstars, to national coordinators for USA Gymnastics. According to Moceanu, Bela and Martha run the show today. Martha travels around the country plucking the most talented children from inauspicious class programs, shuffling them to more prestigious clubs with best-in-class training regimens. The coaches of national team members and future contenders must curry favor with the Romanian-Americans to ensure their girls are looked upon favorably.

In addition to changes here in the U.S., the priorities in Eastern Europe have changed since the wall came down. Before the fall of communism, the Soviet Union had forever been the predominant force in gymnastics with champions like Ludmilla Tourescheva, Olga Korbut, Nellie Kim, Oksana Omelianchik and Elena Shushonova. But in the 1990s, the former Eastern Bloc -- Russia, Romania, East Germany, Bulgaria, Czech Republic -- seemed to lose its heart for the sport. Those countries became distracted in the throes of Westernization. Economic instability, crime, politics and sheer opportunity interfered with Olympic gold.

Add to the declining importance of sport in the Eastern European identity the fact that many of the best coaches from Russia and Romania's heyday fled to the U.S. and opened gyms, following in the Karolyis' footsteps -- Valeri Liukin, 1988 Olympic gold medalist and Nastia's father, being one of them.

At the Olympic trials this year, only the top two girls officially made the team. The next four qualified to go to the selection camp and Martha was free to choose any others she thought were worthy to vie for a spot in Beijing based on performance during the training marathon held at the Karolyi ranch. It all seemed kind of unofficial in that the selection would largely happen behind closed doors. In the old days, when U.S. gymnasts didn't win any medals at the Olympics, competitors qualified in the top six at trials and made the team. Or they didn't. There were upsets and disappointments. It was democratically American. But it didn't produce winners.

While the Karolyis facilitate a program that churns out the best female gymnasts this country has ever seen, they do it by means that are arguably un-American -- not that I'm a big fan of what it means to be an American these days. But we hypocritically snub our noses at the Chinese programs that NBC describes with maudlin, empathetic detail wherein 3-year-olds train for hours a day with the hopes of graduating to a national training center by 7 and the Olympic team by 16 (or 10, it's not really clear), seeing their parents only once a year. With typical American disdain, we "tsk tsk how sad" the lack of freedom of choice afforded the athlete citizens of this communist turned capitalist nation.

While superior coaching and talent is indeed a great part of what has led the U.S. women to silver medal performance in Beijing, a national crisis of self-esteem must also be part of what allows us to forsake our democratic ideals to go for the gold.