A hint of freedom for Iraqi women

Cultural repression by the Muslim militias has waned slightly, but women still miss freedoms they enjoyed under Saddam Hussein. 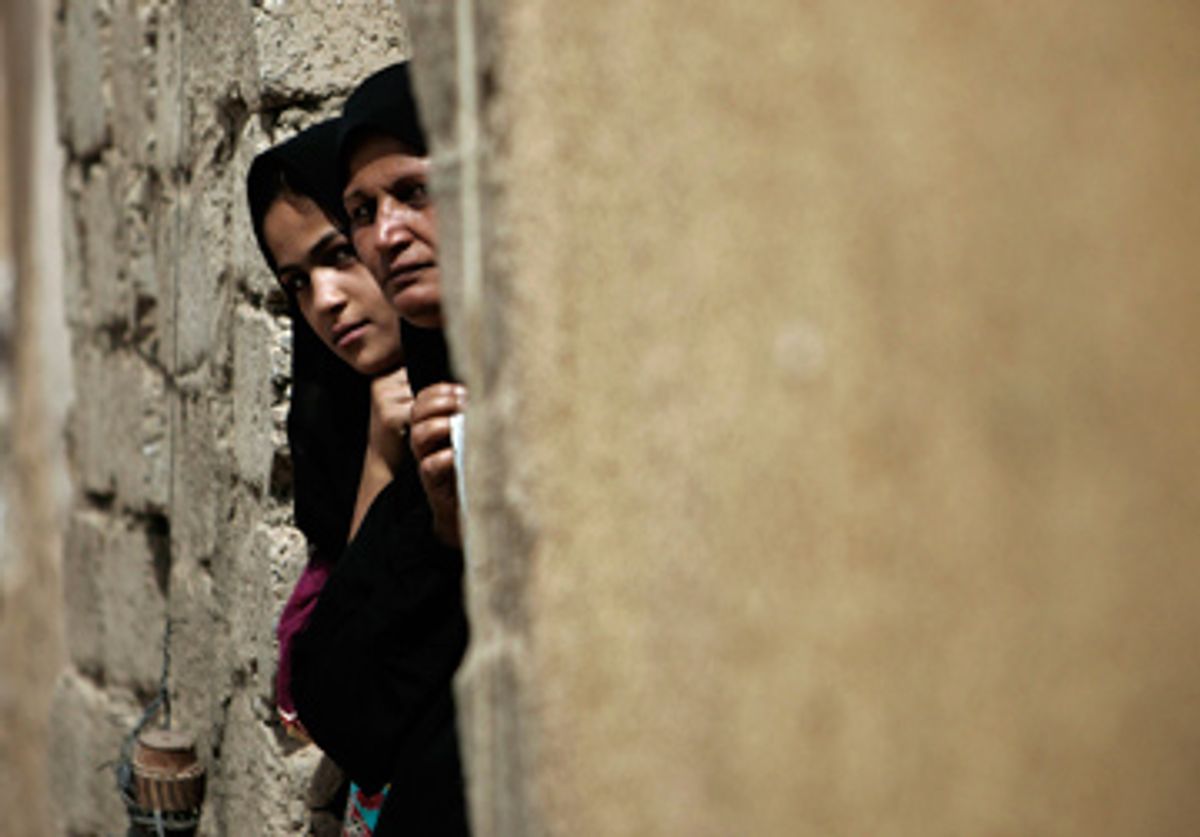 In the dust-caked maze of tents and barracks of a U.S. Army base in Baghdad, Iraqi twins Tammy and Lucy are easy to spot: They dress in form-fitting, colorful T-shirts and tight jeans, their raven-black hair cascades down their backs almost to their knees, and their sweet perfume lingers in the hot air after they walk by. But the women, who work as translators, say they would never dress like this outside the safe confines of the American base.

The conservative Muslim militias that just a year ago fought pitched battles for control of Iraq are mostly gone from the streets. There are signs that the tight grip of the hard-line clerics who had exerted control over Iraqis' private lives for most of the past five years is loosening somewhat. But women here still feel threatened.

One can't yet see a pervasive shift in the way women dress. They continue to wear the conservative clothing that the militias began compelling them to wear after the U.S. invasion. Most women remain cocooned in shapeless, black abaya dresses and hijab scarves that covered their hair.

"If I wore something like this" in the streets of Iraq, Tammy said, gesturing at her T-shirt and jeans, "I'd be killed." Like other Iraqi translators working for American forces, Tammy, 21, uses a nickname to protect herself and her family from anti-American militias.

Before the war, Tammy says, she could walk down the streets of her hometown, the southern and heavily Shia Iraqi port city of Basra, dressed like most teenagers in the United States -- in jeans and no head scarf. Saddam Hussein's regime was one of the world's most despotic, but it was secular and allowed Iraqi women personal rights and freedoms unparalleled in the Persian Gulf. Women, who make up more than half of the country's population, could drive, travel abroad alone, serve in Iraqi security forces and work side-by-side with men. They chose whom to marry and whether to marry at all, and were among the most educated in the region.

"Sometimes in the street I got some comments, but never any threats," Tammy said.

After the U.S. invasion in 2003, conservative Muslim clerics called for Iraq to become an Islamic state. In the name of Islamic values, they eroded the liberties women here enjoyed even under Saddam's oppressive regime. Schools, once coed, became segregated by gender; women were afraid to go outside without a head scarf. As sectarian violence engulfed Baghdad and other parts of the country in 2006, it brought in its wake even more constraints on women's freedoms.

Even in the most prosperous and educated neighborhoods of Baghdad, Iraq's most progressive city, women were threatened and killed for attending college, working, driving cars, or wearing clothes the militias considered immodest -- anything less than abaya and hijab. Some women began to wear black burqas that covered everything but their eyes. Tammy and Lucy's father got a call from men who said they would kill the women -- both of whom attended medical school in Basra -- if they didn't wear the conservative Muslim dress. The women took the threat seriously.

"I know some girls who were killed because they weren't covered up," Tammy said.

In recent months, Iraq has begun to recover from the sectarian fighting and the strict Islamic rule that accompanied it. Barbers, whom some militias had persecuted for shaving men's beards, are doing swift business late into the night. In Dora, a middle-class Sunni district of Baghdad that was a hotbed of Sunni militias linked to al-Qaida a year ago, elderly men again smoke flavored hookahs and play cards and dominos at Hussein al-Jabouri's recently reopened gambling parlor. In Saidiyah, a religiously mixed Baghdad neighborhood that was the site of some of the worst sectarian fighting, Jasem al-Naami opened a hair salon for women, where she also sells nail polish and lingerie. Around the corner from al-Naami's shop, Sun City Foods, a popular burger joint, blares Arabic pop music through large speakers into the crowded street.

"I notice a lot of change," said Sundus, a female security guard who searches women entering the bustling Dora Market, famous across Baghdad for its cheap clothes and fresh fish and vegetables.

"For two years I couldn't even attend college -- the al-Qaida militias in the area forbade us from going to college," she said. Sundus, 29, had completed two years of studies at the Pedagogical Institute of Baghdad, and wants to become a biology teacher. "But in November I am going back to school."

But Sundus was not comfortable enough to give her last name -- or to take off her black abaya, embroidered with tiny white beads, even in the safe confines of the booth where she pats down female shoppers. Even the women she searches can be members of militias: Since the beginning of this year, 24 women suicide bombers detonated themselves in Iraq, three times as many as in all of 2007.

Although violence in Iraq has fallen to a four-year low, concerns about security still exist. Iraqis are less likely to go out at night than before the war, and, because of curfew in some areas and electricity shortages across the country, rarely stay out as late. But while men get to socialize during the day with their co-workers and friends, Iraqi women, for whom evening visits to friends have traditionally played a central role in their social lives, feel isolated.

"I remember the weddings -- we used to stay up all night and dance till morning," said Zakiyah Al-Ameri, 51, who lives in Saidiyah with her husband, five grown sons and their wives and children. "Now the weddings are over by 9 at night, and then the groom takes the bride to his house, and it's over."

Shops selling women's wear are reopening, but for many Iraqi women, impoverished by the war and the staggering unemployment it brought, nice clothes are now out of reach. Many women who had to don the abaya because they feared punishment from hard-line militias are now wearing it because it conceals the shabby clothes they have underneath, said Tahrir, 28, who sells fresh cheese and yogurt from a rusted stall at the Dora Market.

"Before the war, I never wore an abaya -- I wore a skirt and a shirt, and a colorful scarf," said Tahrir, 28, who did not give her last name. She wore a tattered black abaya and a brown headdress. "Then the militias came, the fighting began, and we couldn't work. My family's financial situation has changed. I can't afford fancy clothes anymore."

"Everything is so expensive," said Dagrid Khalid, 27, who makes about $250 a month teaching English at a school. "There are all these clothes, but I can't afford to buy anything. At the salon, they charge $8 to do your hair."

Money is one of the major concerns for everyone in Iraq, where unemployment is estimated at 35 to 50 percent. Many of Iraq's most educated women have fled the country, moving to Jordan, Syria and beyond to escape the danger of fighting and because they felt that they would not be able to work in their field in a country that has adopted a conservative view of the role of women in society. Tammy and Lucy, who want to become surgeons, think they don't have a chance of finding jobs here.

"It's pretty much impossible to become a surgeon in Iraq if you are a female," Tammy said. "There is no law that prohibits it but there are a lot of obstacles."

They became translators for American troops when they heard that after a year of doing this, they will become eligible for expedited immigrant visas to the United States. Recognizing the dangers of this job -- at least 250 Iraqi interpreters have been killed so far, mostly in revenge killings -- Washington has established a program that allows some interpreters who have worked with American forces in Afghanistan and Iraq for at least 12 months to move to the United States with their families.

"We want to go to the States to complete our studies, that's why we're here," Lucy said. "We started working last November, so in November, we will be eligible for a visa."