A pre-convention memo to Hillary Clinton

Ignore your sniping campaign team. Smart advisors would tell you to give Barack Obama your undivided support from now until Election Day. 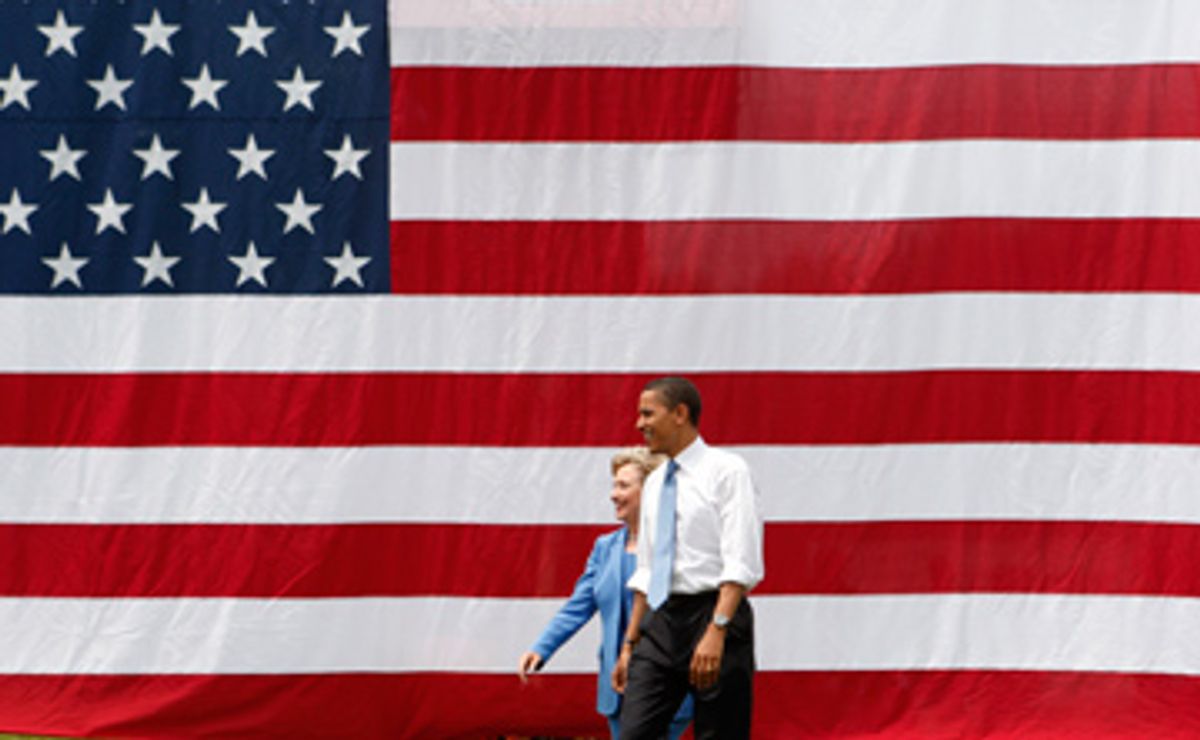 As a candidate in the primaries, you received a lot of truly useless advice from your high-priced helpers -- a situation highlighted this week by the embarrassing release of some of their confidential memorandums in the Atlantic magazine. From the beginning, your campaign seems to have been impervious to wise counsel -- even your own.

First your team of advisors positioned you as the "inevitable nominee," boasting inanely that you would steamroll any aspiring rivals with money and celebrity. Then they failed to understand how vulnerable you would be in the caucus system. Throughout the campaign they misunderstood how Democratic politics has changed over the past decade, ignoring the effect of Bush's presidency and the rise of the netroots.

Bad advice persists when good advice is falling on deaf ears, however. Your advisors and consultants cannot be held responsible for your decision to hire them. Were you to listen to a smart advisor, however, this is what she would tell you:

The question you must face is how to salvage what remains in the wake of defeat. The hour is getting late, but it is still possible to sidestep the pitfalls ahead instead of diving into them.

So let's leave aside for a moment the question of whether Barack Obama actually will win in November. Only fools claim to know the answer, but let's assume that what many of your close friends have reportedly been whispering lately is true -- that he cannot defeat John McCain.

With too many of your supporters, donors and advisors undermining Obama and threatening to mar the Democratic convention -- and with you and President Clinton still permitting doubt to linger about your own enthusiasm for the presumptive nominee -- such talk merely sets you up to be blamed for his defeat in November. Should Obama fall in an environment poisoned by post-primary malice, his supporters will not be quick to forgive -- and the most unflattering caricature of your own motives and character will prevail.

The inevitable retaliation would inflict fatal damage on any prospect of a future presidential candidacy for you or of your someday winning the Senate majority leadership. Rather than making history as the first serious female contender for the presidency, you would be remembered and resented for ruining the chances of the Democratic Party's first black presidential nominee.

Encouraging your supporters to make trouble at the Democratic convention would be a strategic error of enormous proportions, as would any further hints or winks or whispers about the flaws of Obama's candidacy. The inability to control such gestures, which are clearly motivated by emotions rather than wisdom, betrays a lack of mature statesmanship.

Too many of your closest advisors possess no such qualities, as indicated by their incontinent leaking and peevish sniping. And the memos published by the Atlantic show that their analysis of the realities of the campaign was not exactly sharp.

So let's state the obvious as bluntly as possible: If it is true that Obama cannot win, as so many of your disgruntled friends insist, then you have absolutely nothing to lose by giving him the fullest possible support from today until Election Day. Get it? You have nothing to lose, and everything to gain, in fact, by smothering the recriminations of the primary season in good will and hard work. Then if Obama loses despite your wholehearted backing, that will be the fault of him and his campaign team, and they will have no reason to blame you.

If on the other hand you allow yourself to be perceived as less than enthusiastic and dedicated in your endorsement of him -- and if your activists and donors persist in boycotting his campaign -- then you will be tarnished by his defeat. It is true that your critics in the media may cast doubt on your sincerity no matter what you say and no matter how hard you work, but your task is to deprive them of credibility. (Certainly you've beaten them at that game before.)

Sometimes you seem to understand perfectly well where your own interests now lie; sometimes, not at all. Sending mixed messages is, as always, a big mistake. Being consistent is essential.

None of this is intended to discourage you from placing your name in nomination at the convention, going through a historic roll call on the floor, or basking in the limelight with your husband in Denver. There should be no doubt that you earned those moments or that President Clinton is entitled to address the convention. Those who suggest that Obama will somehow be diminished by a Clinton speech or roll call only emphasize his weakness, an error that his campaign understands.

But when the floor count reaches the point where Obama has won, that will be the last opportunity to end this persistent shadow campaign. That is when one of your most prominent supporters should ask the chairperson to end the roll call and let the convention nominate the senator from Illinois by acclamation. Such a generous scenario would fulfill your obligation to your party and your values and redeem the inspiring speech you delivered on the day that you conceded the nomination.

But it would also be the smartest way -- the only way -- to serve your own political interests. So give some careful thought to what is best for your country, and for you.