Salon selects the songs of the summer -- from the Jonas Brothers to Beck and beyond. 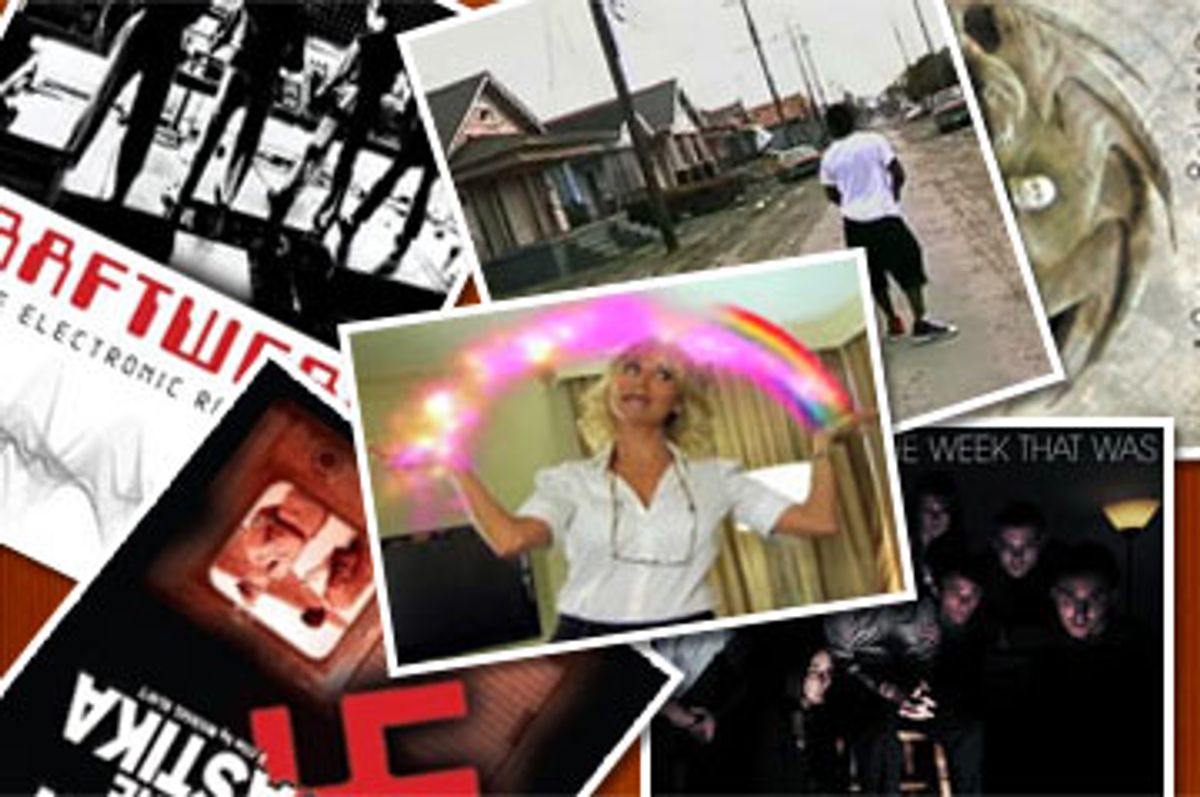 Estelle with Kanye West, "American Boy"
Whether it's Wallis and Edward or Bush and Blair, let's face it: America and England can't keep their hands off each other. But has there ever been a silkier celebration of transatlantic flirtation than Estelle's deliriously jet-setting "American Boy"? As the U.K. rapper spars playfully with a smooth-talking Kanye West, the two seduce on a level that's more sartorial than sexual. She wants to go shopping in New York; he dazzles like a London bloke in a "suit bespoke." Their romance of sneakers and Ribena makes for that classic blend -- elegantly English beats and expletive-loving, in-your-face Yankee wordplay. "Would you be my love?" Estelle sighs, intoxicating as a Stoli and tonic, irresistible as Big Ben or the Brooklyn Bridge. If it's possible for a song to be good-looking, this one's drop-dead gorgeous. -- Mary Elizabeth Williams

Jonas Brothers, "Burning Up"
I'll be honest: I miss boy bands. Bully for art rock sensations like Gnarls Barkley, but the backlash against 'N Sync and the Backstreet Boys left me with a gaping hole in my 13-year-old soul for saccharine, ridiculously engineered songs in which I was the primary character. To boot: the Jonas Brothers' first single, in which a trio of gorgeous brunette siblings primed by Disney tell me about how I am killing them with my lack of love and, um … making them go under? Hell if I know what this song is about, but this cut off their third (yes, third) album, "A Little Bit Longer," is a three-minute jaunt into superstupidity that makes me believe in the power of summer pop. The only burning question left is: Which Jonas do you like best? I choose Joe. -- Sarah Hepola

Ida Corr, "Let Me Think About It"
A summer song isn't simply a song that comes out in the summer -- it can be a hit that peaks in the spring but has legs, and keeps resurfacing, maybe until Labor Day. Armed with a bumptious groove unafraid to spread its legs, "Let Me Think About It," Danish disco nobody Ida Corr's incredibly plastic and infectious collaboration with Dutch DJ Fedde le Grande, a smash in Europe last year, topped the U.S. dance chart for five weeks in March, and descended very gently as the temperature rose. But its irresistible frivolity said heat, and its subtle paean to frustration said desire, so it stuck around, accompanied by a video homage to Robert Palmer featuring 17 copies of the singer strutting around in purple-fringed lingerie, rose-colored shades and a Sly Stone fright wig, looking like a battalion of Beyoncé fembots. Most things about the song (let alone the video) ring gloriously fake and silly, from the farty synth-horn blasts of its hooks to Corr's breathy declaration that she's "the true way to ecstasy." But the chorus deftly gives voice to Corr's understandably ambivalent would-be lover, providing a wry counterpoint to all the tomfoolery. As of August, "Let Me Think About It" lingered unequivocally in the dance Top 10, with 40 weeks on the chart. Nice legs. -- James Hannaham

Duffy, "Rockferry"
When I listen to "Rockferry," one of the singles from the debut album of Welsh pop star Duffy, I catch echoes of everything I loved on the radio as a little girl in the mid-'60s: girl groups, English songbirds who'd crossed the pond to grace our airwaves, any band or singer who sounded even remotely like the Beatles (as so many, at the time, did). I love the way Duffy's mellow, golden-honey voice slips its way past the echoey piano chords that open the song, and the way her sturdy phrasing stands so bravely in the face of the agonizing heartbreak that's surely just around the corner. "Rockferry" sounds like summer to me, because even coming through stereo speakers, it captures the idea of a rich, lush sound resolutely pushing its way through a little transistor radio -- the one your big sister doesn't know you've borrowed. -- Stephanie Zacharek

Beck, "Gamma Ray"
Amid all the histrionic vocals and busy beats blasting from the radio speakers, it's a relief to hear something as minimal and chill as Beck's "Gamma Ray." Tense but boppy, "Gamma Ray" is propelled by a hypnotic, killer riff. Beck's vocals sound like they're emerging from a block of ice even as he sings about the sweltering heat. But this is no idyllic Beach Boys-style ode to summer; moody lyrics reference heat waves and melting icecaps, and Danger Mouse's brilliantly modern take on psychedelic production swathes the impossibly catchy melody in prickly unease. All of which might just make "Gamma Ray" the perfect song for this bummer recession summer. -- Joy Press

Sharleen Spiteri, "Don't Keep Me Waiting"
Shouldn't a woman named Sharleen Spiteri be working the Clinique counter at the Macy's in Paramus, N.J.? In fact, she's a Scottish singer who has stepped out from behind her longtime band, Texas, to release a splendid solo album, "Melody," that has climbed to the top of the U.K. charts and, by rights, should be doing the same here. The jauntiest cut is "Don't Keep Me Waiting," which weds an irresistible hook to a Mersey beat, while keeping Spiteri's lustrous voice front and center. The song concludes with that de rigueur staple of summer music -- the "na na na" chorus -- and provides definitive evidence that Dusty Springfield is alive and well. -- Louis Bayard

Tilly and the Wall, "Falling Without Knowing"
Did Tilly and the Wall beam themselves here from the '80s? The song "Falling Without Knowing" in particular throws a girly voice in front of an echo-filled, bouncy new wave sound. This is a tune as lightweight as a summertime soap opera, filled with upbeat, weak-in-the-knees love, a cross between the Go-Gos' "Head Over Heels" and the Cure's "Pictures of You." "Falling Without Knowing" belongs on an episode of "Veronica Mars"; it's the sound of a giggling teenage girl doing that awful "Footloose" dance barefoot on the beach (not unlike the dancing here), while sucking on a cherry popsicle. But don't we all crave a little nostalgic taste of bubble-gum romance in our crusty, old lives? I know I do. -- Heather Havrilesky