The strangest live album ever

The Fiery Furnaces know how to make perfect pop songs, and they know how to rock -- but on their first live album, they just want to tear things apart. 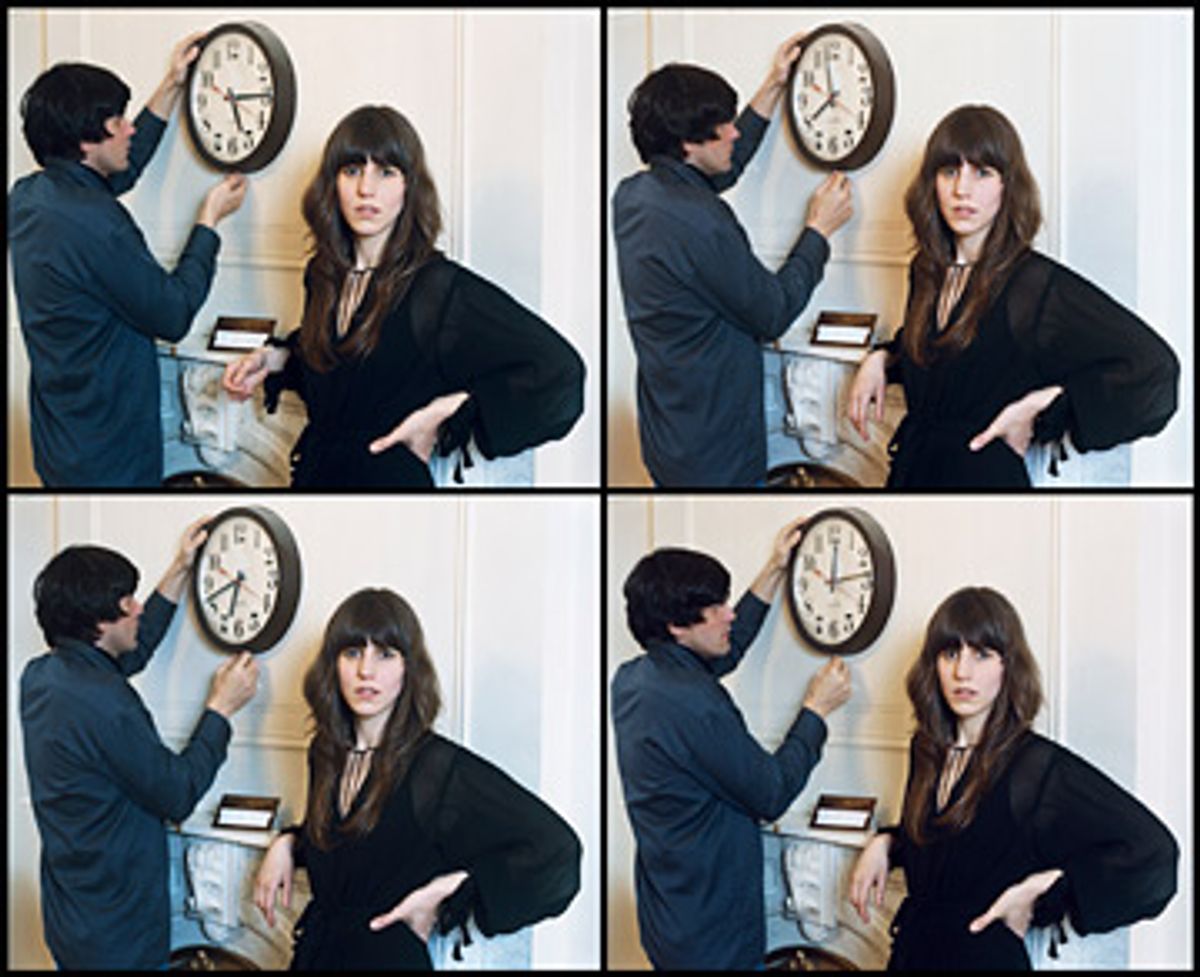 Listening to the Fiery Furnaces can be like walking down a cobblestone alley that suddenly veers into a sand dune. Since 2003, the band -- essentially Chicago-raised siblings Matthew and Eleanor Friedberger -- have released six studio albums that are ostentatiously cut-and-pasted together. In Furnaces songs, bridges appear from around corners you didn't hear coming; words swing from concrete detail to blathering nonsense, never to return. Abrupt segues abound, not only from song to song but also within individual tracks. The Fiery Furnaces have frequently cited the Who as inspiration, and like that band early on, they write chewy little song nuggets; occasionally there's a sonic resemblance as well. But like few bands of any era, the Furnaces take those nuggets and strew them all over the place -- frequently, in seemingly random order.

In practice, this approach is scattershot but frequently brilliant. Matt, who writes most of the songs (and produces, arranges and plays most of the albums' music), has a gift for tunes as well as production trickery, and he knows his way around both classic-rock guitar riffs and set-piece keyboard parts. Sometimes he gets cutesy: "Clear Signal From Cairo," a song from last year's Fiery Furnaces album "Bitter Tea," features a tinkly melodic tag ("It's a clear, it's a clear, it's a clear") that's one of the most annoying earworms I've ever encountered. But to listen to "Here Comes the Summer" or "Tropical Ice-Land" (both from 2005's "EP," a cheeky title for a work that at 10 songs and 41 minutes has the shape and length of an album, not an EP), or the delicate "I'm Waiting to Know You" (from 2006's "Bitter Tea"), is to hear a band that can seemingly make perfectly shaped, completely immediate pop records whenever it wants to.

Live albums are usually a way for a band to prove that they rock, and can move an audience without studio magic. But the Fiery Furnaces have no such agenda. "Remember" is 1) a career retrospective and 2) a live double-CD (or triple vinyl LP), featuring 51 tracks that generously represent all of their studio albums. Add to this the fact that in concert, the band obsessively rearranges and distends its own back catalog, frequently jumbling the running order of their songs' already cobbled-together structures -- playing a verse and chorus from Song A, then abruptly shifting to the bridge of Song B, before finishing with one more chorus from Song A. They do so with such searing focus onstage that, seeing them, you might never guess how whimsical their albums sound.

You might figure that recording a couple of recent shows and editing them into a cohesive document of the performances would be easy enough; even using recordings that differ in sound quality isn't unprecedented -- see Nirvana's posthumous "From the Muddy Banks of the Wishkah." No, the Fiery Furnaces made their live album the same way they made their studio albums: by taking wildly disparate live versions of songs and stitching them together, within the same track. (The only other live album I'm aware of that's constructed this way is "Grayfolded," from 1995, in which sonic trickster John Oswald constructed a two-hour version of the Grateful Dead's "Dark Star" from concert tapes.) "Blueberry Boat," which begins "Remember," is the title track of the Fiery Furnaces' second album, released in 2004, which introduced Matt's expanded kitchen-sink songwriting style. That's the function it serves on "Remember" as well: putting it in pole position seems to be the band's way of saying, "If you like this, you'll like it all."

What there is to like here isn't too far from what there was to like before. This version of "Blueberry Boat" is listenable (or annoying, if you're not in the mood) in most of the same ways as the one on the album. Here, it's eight-and-a-half minutes long and contains nine audible edits. The arrangements veer from a measured duet between Eleanor's voice and Matt's electric piano to bony, all-elbows garage rock to what could be a bar-band Zeppelin cover, with Eleanor's voice under heavy reverb; fidelity ranges from roomy and full to Walkman-condenser-mike. At two different spots in this, the album's opening song, a new performance is overdubbed onto Eleanor saying good night and the audience cheering.

Yet it sounds like a joke with the band's fans rather than one at their expense. As much as with the studio albums, there's a conspiratorial feel, a sense of glee at pushing limits and bringing you along if you're willing. Even if you're a fan this can all seem like too much. But too much is what the Fiery Furnaces do best. Because their music is compelling, its fractures become part of the draw; the holes in the narratives invite filling in. The Friedbergers appeal to people as obsessive as themselves: Trekkies, Whovians, comics geeks, people who enjoy stepping into made-up worlds, who like their meanings at least partly buried, who pride themselves on knowing the codes, but don't mind not getting everything, because it gives them more work to do.

But the Friedbergers aren't merely prog-rockers in indie rock drag. For one thing, they have no serious pretensions to classical music; for another, it's the words as much as the music that are the real draw. Matt is one of the most arresting and original lyricists who's ever worked in pop, and one reason for that is that he grounds his songs in obsessively ordinary detail. If Craig Finn of the Hold Steady makes myth from bored, suburban teenage punk fandom, Friedberger stresses everyday detail so hard it can sound as though the songs are set on Mars. The song "Chris Michaels" (from "Blueberry Boat") opens, "Later that lunch with the taco-lettuce crunch/ Crunch, she sets herself apart the bunch"; immediately we're somewhere we recognize, a lunch counter or fast-food joint, but that odd phrase ("taco-lettuce crunch") serves notice that things are probably going to get weird. Needless to say, they do.

Or try this verse, from "Borneo" (from "Bitter Tea"): "So I gambled on going further afield/ So I flew to Sydney and then to Bali and then to Jakarta/ And called on my stepfather's ex-business partner, Major Timmy Sastrosatomo/ And he set me up as a silversmith batik dabber/ In a house once owned by the princes of Mataran/ And he told me all his troubles." Of course he did.

What may be strangest about all this is how naturally those words roll off Eleanor Friedberger's tongue. Or rather, how easy they sound coming out from between what may be permanently gritted teeth -- her phrasing is generally clipped and laser-focused. On "Remember," the live version of "Single Again" is drenched in Matt's gurgling analogue-synthesizer effects, but when Eleanor barks the words "My husband he died/ And I laughed till I cried" like they're being pulled out of her, forcibly, she brings the whole thing back to earth. Her cool tone recalls the young Patti Smith's, but unlike Smith, Eleanor never explicitly aims for transcendence: She's singing the words, not the other way around.

Still, a live album is supposed to capture things that you can't quite get in a studio, and as odd as it may be, that's true of "Remember" as well. At one point during this version of "Blueberry Boat," Eleanor hollers an off-mike "yeah!" in response to an audience member doing the same. It's as surprising as any of the splices, in a way: Eleanor never sounds priggish, but her singing is so no-nonsense it's easy to forget she's probably having fun doing it.

That moment (and others, as on "My Little Thatched Hut," when she introduces "my brother-man on keys" after Matt takes a synth solo) isn't all that makes "Remember," for all its trickery, feel like a live album. I've seen the Fiery Furnaces twice; neither time did they sound remotely like the other. All their albums are musically distinct. A regular live album might tell one story; "Remember" tells both.