Was one of the youngest prisoners at Guant 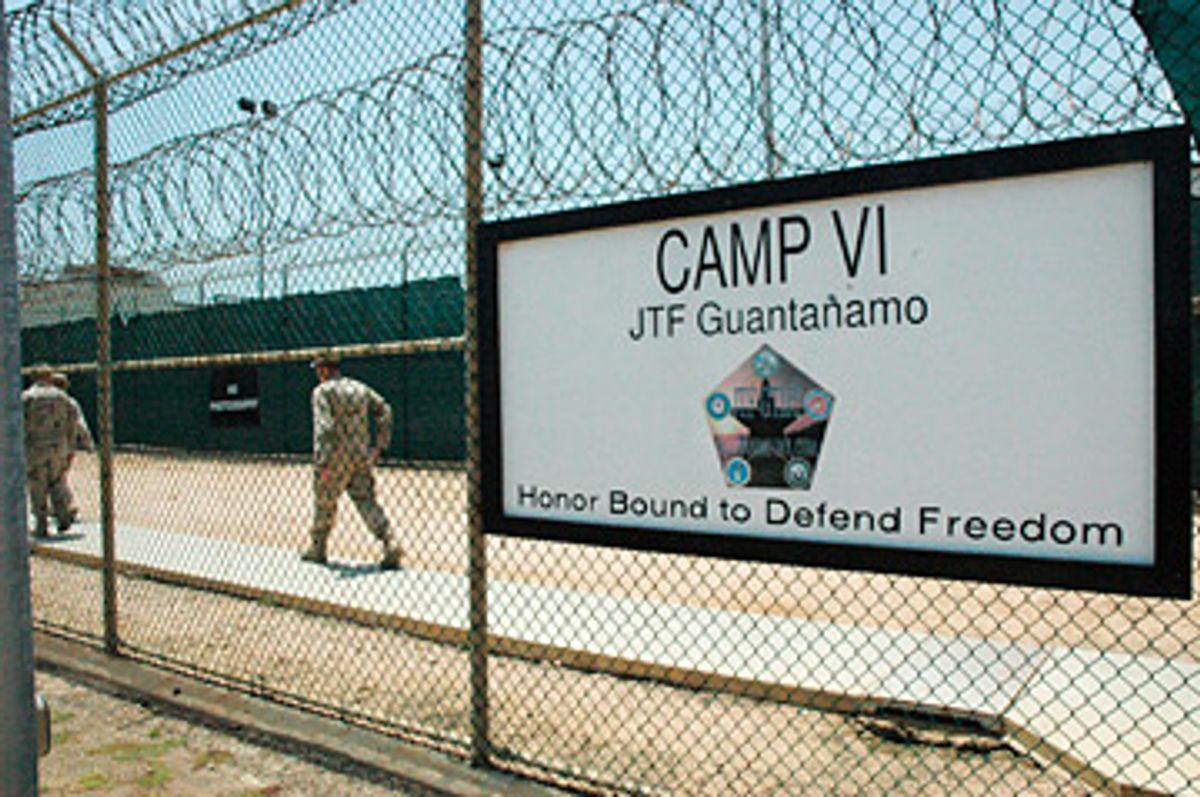 One of the youngest detainees at Guantánamo Bay, a 23-year-old Afghan named Mohammed Jawad, spent two days in a courtroom here last week as his defense lawyer argued that his case should never go to trial. The attorney, Maj. David Frakt, claimed that his client was repeatedly tortured and abused in U.S. custody, charges that were supported by the testimony of a senior U.S. Army criminal investigator.

Perhaps just as troubling, Frakt also asserted that partisan politics played a role: Prosecutors handling the case, he said, were pressured by a Pentagon lawyer to bring charges against Jawad quickly -- before the next American presidential election drew too close.

Jawad is accused of attempted murder for allegedly throwing a grenade into a U.S. military vehicle in Afghanistan in December 2002. Two U.S. soldiers and their Afghan translator were injured in the attack. Jawad was 16 or 17 years old at the time (he doesn't know his exact birth date). Given that he was an adolescent at the time of his capture, arguably he has been treated illegally under international law by his American captors.

Prosecutors for the U.S. military commissions say Jawad is a dangerous terrorist. But Frakt says that Jawad was a naive, illiterate teenager who was duped into joining a militia group and was coerced into signing a false confession after the attack and his capture.

The U.S. government concedes that Jawad was neither a member of al-Qaida nor part of the Taliban, and shortly after his arrival at Guantánamo, it concluded he had no intelligence value. Yet among approximately 260 Guantánamo detainees, he is one of only 20 whom the U.S. has currently slated for trial by the U.S. military commissions.

During last week's hearing, Frakt argued that Jawad was charged as a result of the political interference of the military commissions' legal advisor, Brig. Gen. Thomas Hartmann. Testimony in this and other cases lends credence to Frakt's argument: The former chief prosecutor for the commissions, Col. Morris Davis -- who resigned late last year claiming that Hartmann had pressured him to bring charges against detainees before the presidential campaigns got too far under way -- testified in June that Gen. Hartmann has pressed his office to prioritize Jawad over other cases.

Davis said that Hartmann was frustrated with the slow pace of prosecutions at Guantánamo, and believed that Jawad's alleged attack against U.S. soldiers would "capture the American imagination" with him as a trial subject. Unlike many other pending cases at Guantánamo, which are based on charges of conspiracy or material support for terrorism, Hartmann was reportedly drawn to Jawad's case because, as he put it, the young man had "blood on his hands."

Testifying before a different judge in another case on Aug. 13, Davis stated that "Jawad went from the freezer to the frying pan, thanks to General Hartmann." He said that during a three-month period after Hartmann became legal advisor for the military commissions, Jawad rose from approximately "number 25 or 30" on the prosecution's list of priorities to "number one."

Hartmann had previously been prevented from acting as legal advisor in a Guantánamo case. In May, another judge, Navy Capt. Keith Allred, barred Hartmann from that role in the case against Salim Hamdan -- the detainee convicted earlier this month for serving as Osama bin Laden's driver -- based on similar complaints that he had improperly interfered with the prosecution in the case.

The military judge in Jawad's case, Col. Stephen Henley, rejected the argument that Gen. Hartmann had improperly influenced the charges against Jawad. However, he barred Hartmann from playing any role in the post-trial review of the case, reasoning that Hartmann's public statements aligning himself with the prosecution compromised the objectivity necessary to perform that review. (Under the military commissions' rules, every trial is automatically reviewed by the convening authority, and Hartmann -- as the commissions' legal advisor -- would normally be required to provide advice during the post-trial review.)

Last week's hearing also focused on defense claims that Jawad has been tortured while in U.S. custody. To make his case, Frakt called Army special agent Angela Birt as a witness. Birt investigated the deaths of detainees at Bagram Air Force Base in Afghanistan in late 2002. Jawad was detained at Bagram at the time, prior to his transfer to Guantánamo in early 2003.

Birt described U.S. soldiers' abuse of detainees at Bagram as "the worst I've ever seen." She didn't make the judgment lightly: She has 18 years of experience as an investigator with the Army's Criminal Investigation Division and has investigated some 2,000 cases over the course of her career.

Birt said she interviewed Jawad in 2004 as part of her investigation of abuses at Bagram. Jawad told Birt that while at Bagram he had been beaten and kicked by guards, shackled and hooded, deprived of sleep, forced to stand for lengthy periods, and shoved down a flight of stairs. Jawad said that military police chained him to the door of his cell, and if he tried to sit or lie down, they would enter his cell and force him to stand. He said he often heard the screams and cries of other detainees. Jawad complained of a broken nose, chest pain and problems in urination as a result of his treatment.

Birt testified that his account was similar to those of many other detainees at Bagram.

In a statement to the military judge last week, Frakt described Bagram "not as a detention camp, but as a torture chamber," and renewed a motion to dismiss the charges against Jawad because of his alleged torture and mistreatment.

Jawad's reported abuse did not end at Bagram. On Wednesday, Army Maj. Jason Orlich, formerly an officer with the detainee operations group at Guantánamo, took the stand to answer questions about sleep deprivation tactics used on Jawad at Guantánamo. Known as the "frequent flyer program," the program entailed moving detainees frequently from cell to cell, typically every two or three hours, to deprive them of sleep. In May 2004, Jawad was moved 112 times during a 14-day period. According to Frakt, Department of Defense guidance limits sleep deprivation to a maximum of four days.

When asked if he believed such treatment was "humane," Maj. Orlich replied "yes." He testified that the program was intended to "maintain order and discipline" and to prevent detainees from throwing urine and feces or organizing attacks on guards. Orlich claimed that those subjected to the program were violent detainees -- but according to Jawad's attorney, Guantánamo disciplinary records show no violent behavior by Jawad. The most serious offense recorded against Jawad was "cross-block talking."

In addition to the "frequent flyer program," Jawad was reportedly subject to two 30-day periods of isolation. The first occurred in early 2003, just after his arrival at Guantánamo, when he was still not yet 18 (or 17) years old. He was kept in an uncomfortably hot cell, and allowed no copy of the Quran or human contact apart from an occasional interrogation. He was isolated for an additional 30-day period later that year, in September and October. American Correctional Association standards limit isolation for juveniles to five days.

Jawad attempted suicide soon after the second isolation period, in December 2003, but military psychologists reported in both 2004 and 2008 that Jawad had no mental problems. Amazingly, they had determined that for Jawad to be diagnosed with depression, "his condition has to interfere with one of seven 'major life activities.'" As his attorney remarked wryly: "At Guantánamo, Jawad has no major life activities."

Judge Henley is expected to announce in late September whether he will dismiss the charges against Jawad on the grounds of torture.

Before recessing on Aug. 14, the judge also surprised observers with an unusual and unprecedented aspect to his ruling. He ordered the senior government official responsible for the military commissions, Susan Crawford, to review the charges against Jawad, consider additional information from the defense and confirm whether she wants to proceed with the case. The basis for the judge's order was his finding that Gen. Hartmann had failed to include extenuating and mitigating information on Jawad's case when recommending in October 2007 that Crawford confirm the charges against Jawad.

It's possible that Crawford will choose not to pursue the case against Jawad at all. According to Maj. Frakt, "This case would never survive scrutiny if they had done a proper pretrial investigation."

Crawford must decide by Sept. 25 whether the case against Jawad will go forward.

Jo Becker is the advocacy director for the Children’s Rights Division at Human Rights Watch.