Is this comedy about a heavy-metal wannabe a Gen X rock 'n' roll fantasy? 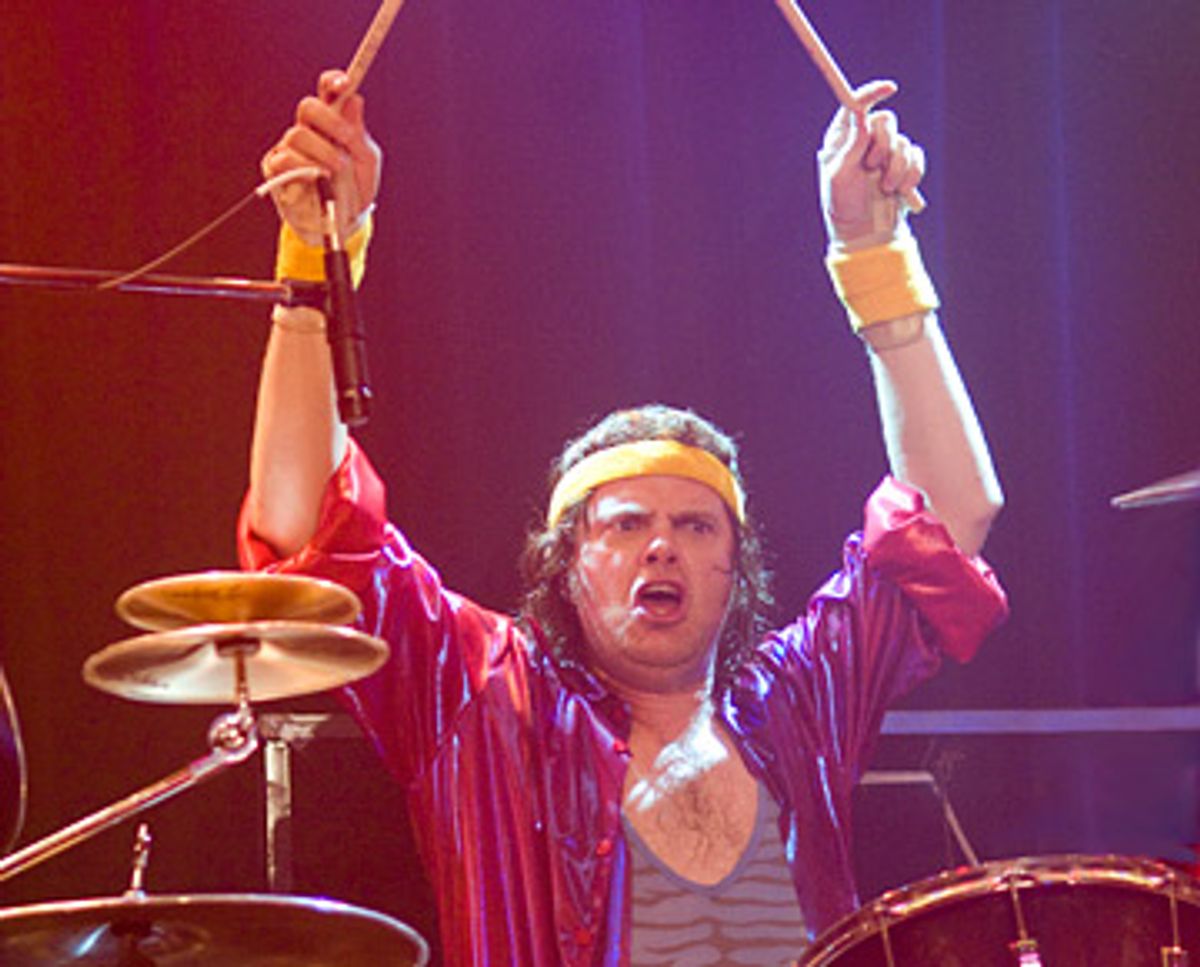 Can Generation X grow old gracefully? Now that nearly half the generation that gave us grunge has turned 40, the question of whether slackerdom can mix with maturity looms. Adulthood implies many of the things this aging bunch has tried to reject, or at least question: marriage, parenthood, responsibility, authority. "The Rocker," a shaky vehicle for Rainn Wilson, most famous for his role as Steve Carrell's uptight sidekick Dwight Schrute on "The Office," does little to suggest that there might be something creepy about an aging heavy metal drummer playing in the same band with teenagers. Instead it massages the delusion that, unlike the hilarious awkwardness Amy Sedaris' aging high-schooler Jerri Blank experiences on HBO's "Strangers With Candy," geezers can start all over again, even in a field as youth-obsessed as the music business.

Fishman, aka "Fish," typifies Gen X's Peter Pan-ish unwillingness to play by the established rules of growing up. In 2006, he's a 40-ish loser doing telemarketing for a Cleveland insurance company. He is unmarried, unkempt and unemployed. He loses his apartment and has to move in with his sister. But in 1986, the film's prologue shows us, he played drums for the hard rock band Vesuvius, a quartet who look like Aerosmith, sound like Def Leppard and act like Spinal Tap. Early in the band's career, as a condition of signing with a major record label, a slick A&R man convinces the other members of Vesuvius to fire Fish unceremoniously, not because he's a bad drummer, or doesn't fit in with the band -- as a musician, Wilson's performance draws on both Ozzy Osbourne and Animal, the muppet -- but because the label president's nephew wants to be in a band.

At first the betrayal sends Fish into a comical fit of pique, and then into what amounts to a 20-year tailspin -- a moral outrage so intense that every time the band's name comes up, he throws a violent tantrum. Unfortunately for Fish, the members of Vesuvius become obscenely rich and famous, and it's difficult for him to avoid the anguish of imagining what might have been. The blown opportunity cripples him; he can neither address it nor move on. "The universe keeps shoving Vesuvius right back in my face!" he complains. As the film's present action begins he's sleeping in his sister's attic. His own nephew, Josh, a heavyset computer geek, plays keyboards for A.D.D., a band that also includes a couple of more glamorous high school friends, Amelia (Emma Stone) and a dark and feminine emo-boy lead singer named Curtis, played by actor/musician Teddy Geiger. When A.D.D.'s drummer gets grounded right before the band is scheduled to play the prom, Josh begs Fish to fill in. The experience rekindles his love of playing -- and his thirst for the heavy metal rock 'n' roll lifestyle, circa 1986.

In the film's cleverest twist of fate, the band sets up a computer teleconference in order to rehearse, and Fish, a Luddite who doesn't understand that his bandmates can see him, rehearses with them in the nude. Fish's niece (Josh's bratty sister) posts a video of "the naked drummer" on YouTube, and it garners millions of hits before the band has released a single song. A.D.D. soon receive a visit from an exec from the same record label that signed Vesuvius, played with scene-stealing smarm by Jason Sudeikis of "Saturday Night Live" and "30 Rock."

With their parents' grudging permission, the band goes on tour and Fish goes berserk, all his bottled-up Tommy Lee energy culminating in tossing a TV from a hotel room window, which, compared to the real debauchery of heavy metal bands, doesn't seem that extreme.

Part of what makes "The Rocker" a pleasant but unimpressive experience is the tendency of the writers, TV veterans Maya Forbes and Wallace Wolodarsky, to avoid the dangerous issues lurking in the scenario they've presented. Fish doesn't try to tempt the kids into the music world's smorgasbord of drugs and illicit sex. And the youngsters aren't interested in the taboos of Fish's generation, either, even though their parents are largely absent on tour (Curtis' mom eventually shows up, out of concern). They're members of a new breed of abstainers and teetotalers. The kids' exaggerated sense of torment and self-absorption alone -- gloomy Curtis, for instance, cannot surmount the fact that his father abandoned his family when Curtis was a child -- seems to prevent them from staying out after 11 p.m.

Wilson's eager-to-please performance provides a lukewarm kind of enjoyment. As Schrute, his fits of anger have a better home, as both Carrell's star power and the corporate setting tamp down his antics, and his stiffness makes more sense. In "The Rocker," Fish has the added responsibility of breaking our hearts, but instead, Wilson's conception of Fish as a collection of slapstick gags intercut with semi-committed moments of warmth keeps us at a safe distance. Wilson knows that making a fool of yourself is a good way to get a laugh, but his physical comedy is easy stuff -- bumping his head on the beams in Fish's sister's attic, starting fights in cubicles and tripping over drum kits: It inspires you to chuckle more out of a reflex than the kind of abandon you associate with truly funny moments. Wilson sometimes even attempts to approximate the antics of similar jackasses like Johnny Knoxville or Jack Black, but dropping in a gross-out moment like when Fish pukes in his hand and pockets the vomit, doesn't suggest a philosophy of humor as much as a desperate prank stapled to a movie script.

The film's plot tries to sew up all the characters' emotional lives into several sketchy subplots. Fish's journey from stunted coulda-been to rising star gets the most play, but he also teaches the mopey Curtis to enjoy his success, play a peppier sort of rock music and get over his father's abandonment. Fish does this without exactly becoming a father figure. The writers may have shied away from suggesting that he means to replace Curtis' father outright because Fish is putting the moves on Curtis' mother (Christina Applegate) behind the kid's back. In subplot No. 2, the love story, we discover that Curtis' mom used to play in a rock band. When Fish catches her playing Guitar Hero by herself, they share a romantic, nostalgic moment that could be the beginning of a relationship. Subplots 3 and 4 are also romantic, specifically Josh's battle to overcome his shyness with his new fan, and Curtis' slow realization that he has a crush on Amelia. The movie buzzes back and forth between these relationships without landing much of anywhere.

Central to the film is the fallacy that yesterday's headbangers had a crazier (and therefore cooler) lifestyle than today's young musicians, and that the music was, if not better, more extroverted and vital. This concept facilely bumbles through the movie in a way that seems somewhat condescending to young audiences. Sure, collegiate twinks like Vampire Weekend have yet to crash their cars and OD on smack, but Britney Spears, Amy Winehouse and Pete Doherty's bad behavior, though of a different stripe, has kept the dream alive.

Finally, in his 40s, Fish has become mature enough to hang out with high-schoolers. It's not exactly heartwarming to realize that "The Rocker's" Gen X fantasy of an escape from middle age is really a developmental nightmare.