I blame A/C for the decline of the labor movement and for decimating the Midwest's population. Mostly, I blame it for the election of George W. Bush. 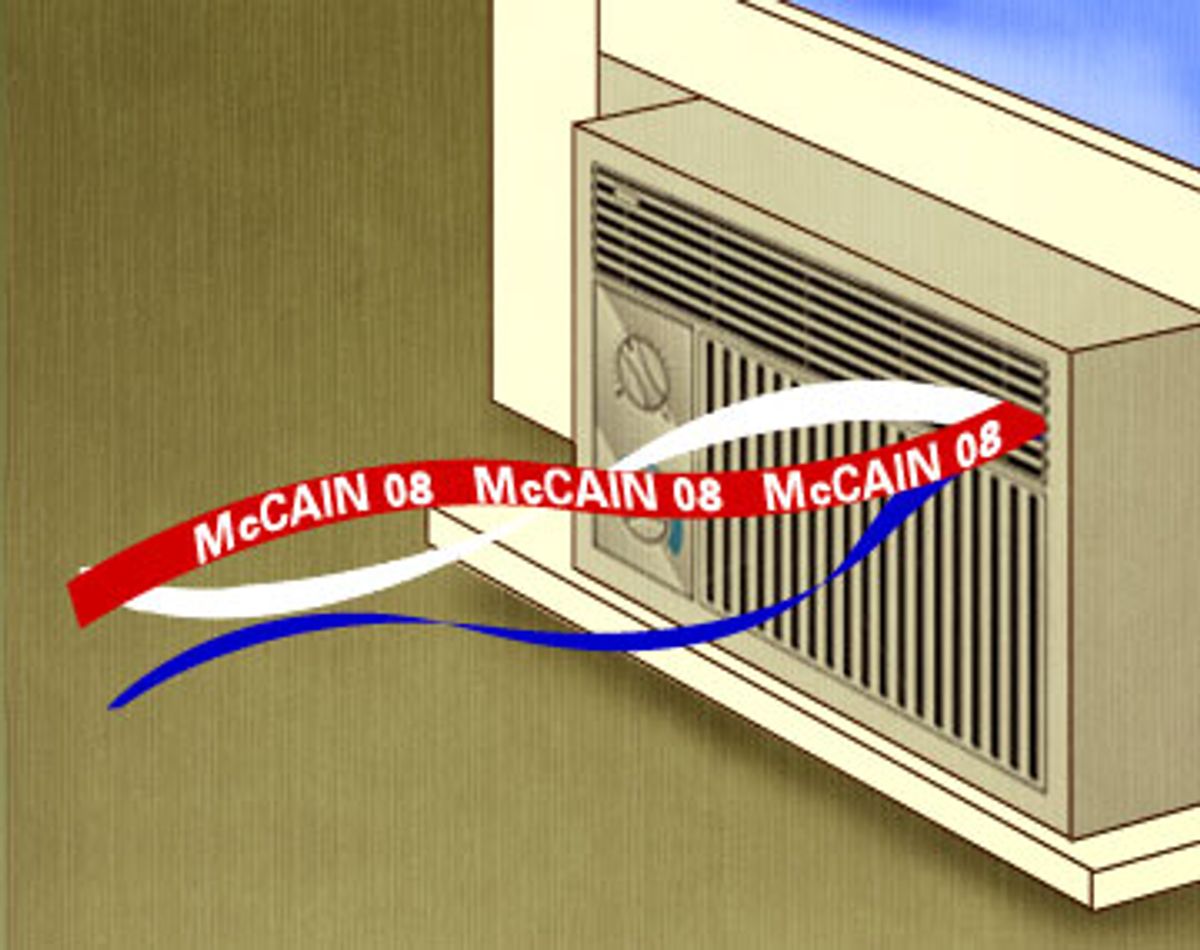 When I moved into my apartment, in May, the first thing I did was tear out the air conditioners. I don't need air conditioning: My front window is 50 yards from Lake Michigan, and, as any Chicago weatherperson will tell you, "It's cooler by the lake." I can't afford it, either: Three window units can add serious dollars to one's monthly electric bill. But those aren't the real reasons I got rid of the A/C.

Air conditioning offends my sense of Northern pride. They have a saying in Maine: "If you can't stand the winters, you don't deserve the summers." But the air conditioner allows Arizonans to enjoy a cool, lakelike breeze in the comfort of their living rooms, without ever having to buy snow tires. As one who has seen firsthand how the Sun Belt created a poor Yankee cousin called the Rust Belt, I blame the air conditioner for the decay of Detroit, Cleveland and Buffalo, N.Y. I blame it for the decline of the American labor movement. And I blame it for the election of George W. Bush, as well as the fact that we haven't elected a Yankee president in nearly 50 years. Honestly, I don't want something like that in my house. Especially if I have to pay for it.

As we observe Air Conditioning Appreciation Week, we should thank A/C for reducing malaria and infant mortality, for allowing pollen sufferers to breathe in the summer and for cooling the labs that produce our computer chips. But we should also talk about the unintended consequences of a machine that pumps out cold air.

Let's start with the Bush dynasty.

Here's a little history. In 1924, when my grandmother was born in the small town of St. Petersburg, Fla., the state had 1 million people -- and six electoral votes. It was the least populous Southern state, a marginally habitable peninsula of humid swamps, hard-packed beaches, alligators, rum smugglers and Seminoles. As a girl, my grandmother kept cool by swimming and propping open her windows. As an 84-year-old woman, she lives in the Panhandle and keeps cool with an air conditioner.

By "a lot of people," she means 15 million. That's how big the state has grown in my grandmother's lifetime. Florida now wields 27 electoral votes. Do some math. A state with six electoral votes is far less likely to screw up a presidential election.

Do a little more math, and you'll see that before air conditioning redistributed the country's population, the Florida recount wouldn't even have been necessary. In the 1940s -- the last decade before the air conditioner became a must-have home appliance -- Al Gore's states contained a decisive 291 electoral votes. As Hofstra professor James Wiley pointed out back in 2004, air conditioning "induced a major population shift within the country that eventually led to the Electoral College defeats of the Democratic presidential candidates in 2000 and 2004." In 2006, an AlterNet story tracked the migration as well.

Without air conditioning, Bush might not even have become a Texan. Right after World War II, his forward-looking father transplanted the Bush family from Connecticut to Texas, a move akin to the Corleones going to Vegas. (I'll bet he bought a window unit for the house in Midland, too.) If Poppy anticipated that air conditioning would swell his adopted state's population and move it into the Republican column, he was right. No state embraced A/C more avidly than Texas. As an official history of the invention put it, "a place like Houston could only be tolerable with air conditioning."

In 1966, Texas became the first state in which half the homes were air-conditioned. That same year, George H.W. Bush was elected to Congress -- from Houston. Coincidence? Or does air conditioning make people vote Republican? After all, the GOP's rise in the South coincides with the region's adoption of air conditioning.

In his essay "The End of the Long Hot Summer: The Air Conditioner and Southern Culture," historian Raymond Arsenault wrote that air conditioning made factory work tolerable in the South, reduced infant mortality, eliminated malaria and allowed developers to build skyscrapers and apartment blocks. Air conditioning industrialized and urbanized Dixie, lifting it out of its post-Civil War funk. No longer a poor, defeated colony, devoted to government aid and hating on Abe Lincoln, the South could fully indulge its conservative leanings.

You can also blame air conditioning for John McCain's political career. In 1982, Arizona was awarded two extra congressional seats, thanks to the arrival of A/C-blasting snowbirds. McCain bought a house in one of the new districts, and became its first congressman.

Where did those congressional seats come from? Well, my state of Illinois has donated eight. So far. We'll probably lose one more after the next census. New York has exported 16, Pennsylvania 14.

Before the advent of air conditioning, the North was the most climatically desirable part of the country. In his 1915 book "Civilization and Climate," Yale geographer Ellsworth Huntington -- a man who believed in the invigorating power of cold air -- determined that the weather in the mid-Atlantic and the lower Great Lakes was most conducive to hard work and good health.

"We are frequently told that the Riviera or southern California has an ideal climate," Huntington wrote. But then he noted, "For most people the really essential thing in life is the ordinary work of every day ... Hence they are the ones which people will eventually choose in the largest numbers."

The area we now call the Rust Belt was once the industrial, financial and political capital of the United States. Between the Civil War and World War II, almost every president came from somewhere between Chicago and Boston. Then, the air conditioner made it possible to export the cool, refreshing breezes of the Northern climate, without the clouds and the snow. The race to the Sun Belt was on.

Four years ago, after Bush won a second term, I became so alarmed by the triumph of air-conditioned America that I set out to write a Northern pride manifesto. In my (un-air-conditioned) Dodge Neon, I drove around the five Great Lakes, in search of beer, doughnuts, fish fries and other signs of culture from naturally cooled North America, for a book I called "The Third Coast." About two-thirds of the way through my trip, I arrived in Syracuse, N.Y. The 'Cuse is the anti-Florida. Syracuse regularly wins the Golden Snowball Award for the most blizzard-ridden city in western New York. It's also losing young people at a faster rate than any get-out-of-Dodge hometown in the United States.

The irony of Syracuse's plight: The city was once the headquarters of the Carrier Corp., the world's largest manufacturer of air conditioners.

In 1902, Willis Carrier was a 25-year-old engineer at Buffalo Forge, a manufacturer of heaters and blowers. A company salesman asked Carrier if he could help a printer whose paper expanded and contracted as the temperature changed, causing colors to overlap. Carrier discovered he could regulate heat and humidity by circulating cold water through a heating coil. He called his invention the "Buffalo Air Washer and Humidifier," after the city that ended up losing half its population to the Sun Belt.

Thanks to a lifetime of inhaling fresh lake breezes, Carrier was an industrious, healthy Yankee, who may have thought, "If I could figure out a way to box up this bracing Northern air, I could make millions ... and destroy the economy of upstate New York." When Carrier started his own company, he located the factory in Syracuse. It was the biggest blue-collar employer in town. At its peak, Carrier employed 6,200 workers. But in 1999, Carrier closed its centrifugal chiller factory -- and moved the jobs to North Carolina. Four years later, it shut down the container refrigeration plant and the compressor plant -- and moved the jobs to Georgia. Now the town is so desperate for bodies it has a program called "Come Home to Syracuse," which begs its prodigal youth to return.

You can hardly blame Carrier. It's cheaper to do business down South. In the B.C. of A/C, when a Northern city was the only practical location for a factory, companies were forced to make deals with stubborn, thick-knuckled union bosses. Norma Rae notwithstanding, the South does not have a strong labor movement. Mercedes-Benz built its latest plant in Tuscaloosa, Ala., an industrial feat that would have been impossible without air conditioning. When General Motors introduced the Saturn, it built the plant in Tennessee. Detroit, GM's hometown, has lost dozens of factories, and over a million citizens, many of them to air-conditioned cities. With its empty city blocks abandoned to pheasants and crickets, it now looks like a laboratory run of what will happen to the earth after the human race disappears.

It's easy to write this now because we've had a cool summer in Chicago. The temperature has never topped 91 degrees. On Monday night, I turned on the bedroom fan for the first time all of August. But I moved here on the day the Great Heat Wave of 1995 spiked. I nearly fainted carrying furniture up a flight of stairs. Over 500 people suffocated to death inside their apartments. Air conditioners would have saved lives, but it's too simple to say the heat wave victims died just because they didn't have them. Most were old, alone and afraid to open their windows. Some died not because they lacked air conditioning, but because they lacked it in an air-conditioned society. The traditional method of cooling off in a heat wave -- camping out in the parks -- is no longer acceptable. No one looked in on those people because, in the age of air conditioning, it's hard to remember that a heat wave can cull the weak and the elderly.

"I guess you need air conditioning when you get older," my grandmother tells me. "Electricity's really gone up, but I'm going to keep it as long as I can."

Ultimately, she plans to adopt my solution to summer heat: Live somewhere people don't need air conditioning. Her house is on the market, and as soon as it sells, she's moving to be near my uncle. In Alaska.