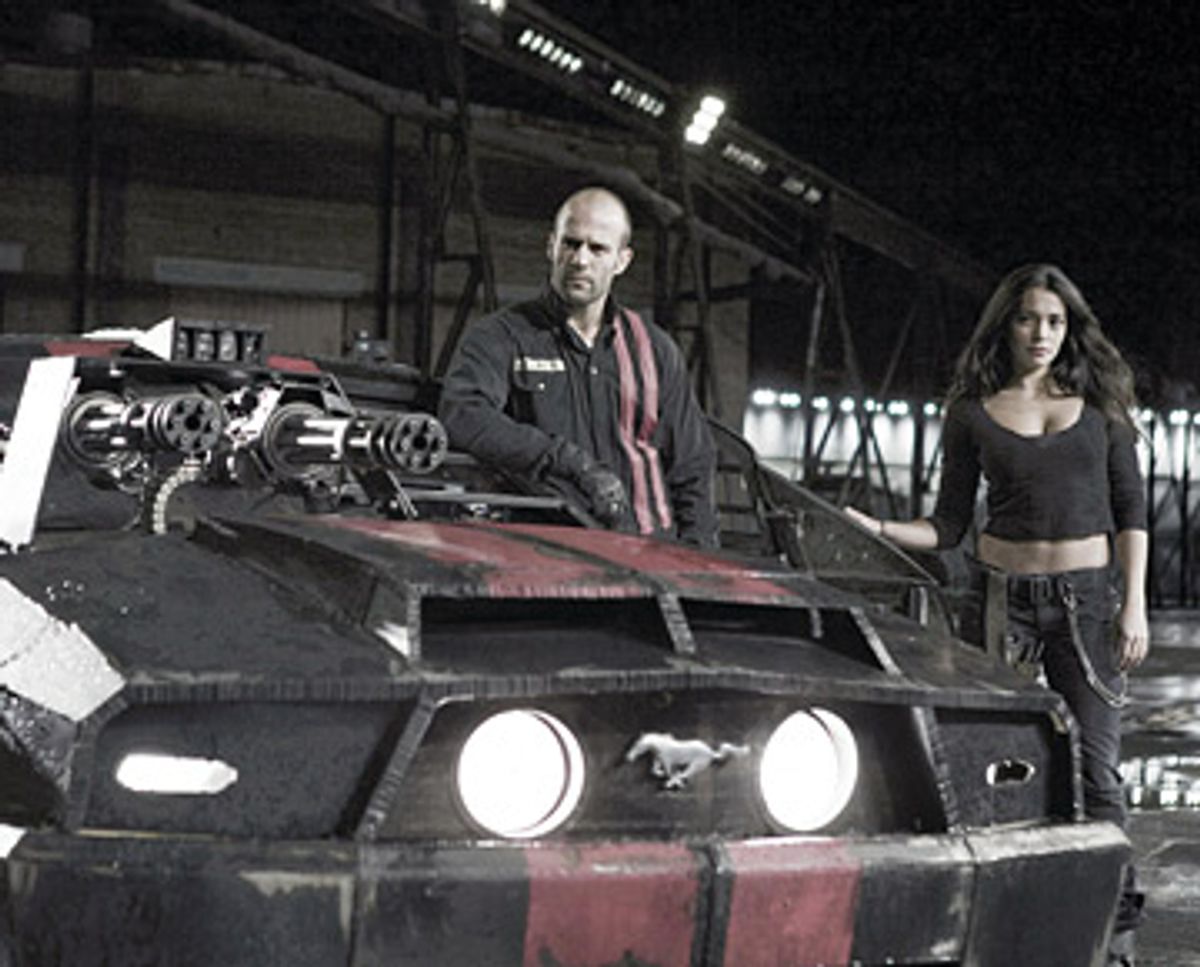 In "Death Race," Joan Allen has the eyes of a lizard and the soul of a ballbuster: If you ever end up on the wrong side of those prison bars, you'd better hope she's not the warden. The guys in "Death Race," Paul W.S. Anderson's semi-remake of Paul Bartel's 1975 exploitation cult film "Death Race 2000," haven't been so lucky. Jason Statham is Jensen Ames, an ex-con and ex-race-car driver who's straightened out his life to make a home with a pretty wife and an infant daughter. But something goes horribly wrong, and he ends up at a dismal, high-security prison called Terminal Island.

Oh -- did I mention that it's 2012, that prisons are now privately held institutions run for profit, and that Terminal Island is known for hosting a killer televised road race -- in which the inmates literally compete for their lives -- that brings the joint bajillions of dollars in Pay-per-View revenues? Allen plays Hennessey, the tough babe who runs Terminal Island and who really knows how to make a buck -- she can walk in stilettos, too. Ames and the other chickadees in her cold, dank nest -- including the gruff-but-classy supermechanic Coach (Ian McShane) and the Bible-reading, not-so-thuggish Machine Gun Joe (Tyrese Gibson) -- are just helpless pawns in her bloodthirsty little game. When Ames, new to the prison, sasses her back with some choice profanity, she crisply informs him -- after her henchman has roughed him up -- that she has "issues" with foul language. At Terminal Island, whatever you do, you don't want to get on Mommy's bad side.

"Death Race" is cartoonishly brutal and pleasantly disreputable, and even if the plot goes completely off the rails, it's not hard to grasp the picture's motives: In case you happen to blink and miss the sight of a baddie's head getting split open like a watermelon, you'll get two replays, so no worries. To his credit, Anderson ("Resident Evil," "Alien vs. Predator") is unapologetic about serving up this junk -- he doesn't try to disguise it as quality entertainment (whatever that might be). But even though Anderson is known as an action director, that doesn't mean he knows how to direct action: "Death Race" is built for speed, all right, but certainly not for clarity. The race sequences -- in which inmate drivers try to run one another off the prison's closed course with vehicles outfitted with machine guns and napalm -- feature the fast, choppy, facile editing and muddy sense of spatial relationships that have served Anderson well enough for years. Why should he bother to change now?

Still, the crashes and explosions in "Death Race" are at least generically exciting. Anderson dutifully gives us what we came for, and the picture (which Anderson wrote, adapting Robert Thom and Charles B. Griffith's screenplay for the Bartel movie, which in turn was based on a novel by Ib Melchior) does offer some dashes of grim wit. When Machine Gun Joe (who, it's hinted, prefers guys to girls) first sizes up newbie Ames, he decides he's going to call him Igor because he's the ugliest guy in the joint. Anderson's camera then casts its unapologetically erotic view on Statham's perfectly chiseled mug -- his stubble is so artfully dappled it could have been painted by Carravagio -- and we suspect, from that point, that Ames and Joe are going to be fast friends. Although not in that way.

Statham has built a career playing rough-and-tumble action guys, in the Guy Ritchie pictures "Snatch" and "Lock, Stock and Two Smoking Barrels" and in the "Transporter" movies, among others. There's no doubt he makes a fine physical specimen in any picture: His muscles have that mysterious filmic quality of looking both rock-hard and pillowy at once. But Statham is a charmer, too, and in Roger Donaldson's "The Bank Job," he shows more complex emotional shading than most of his other roles, including this one, have allowed. Maybe that's why it's so easy, in "Death Race," to buy the image of Ames, a handsome cueball lug, casually resting his little daughter on his hip. Statham moves with such easy grace that you don't have to work hard to believe him. And if he can stand up to Joan Allen, melting her predatory stare with his own molten gaze, then it's clear he's not just the prettiest guy on the prison block, but also the toughest.