To laugh or not to laugh at the worst Shakespearean high school musical ever -- that is the question. 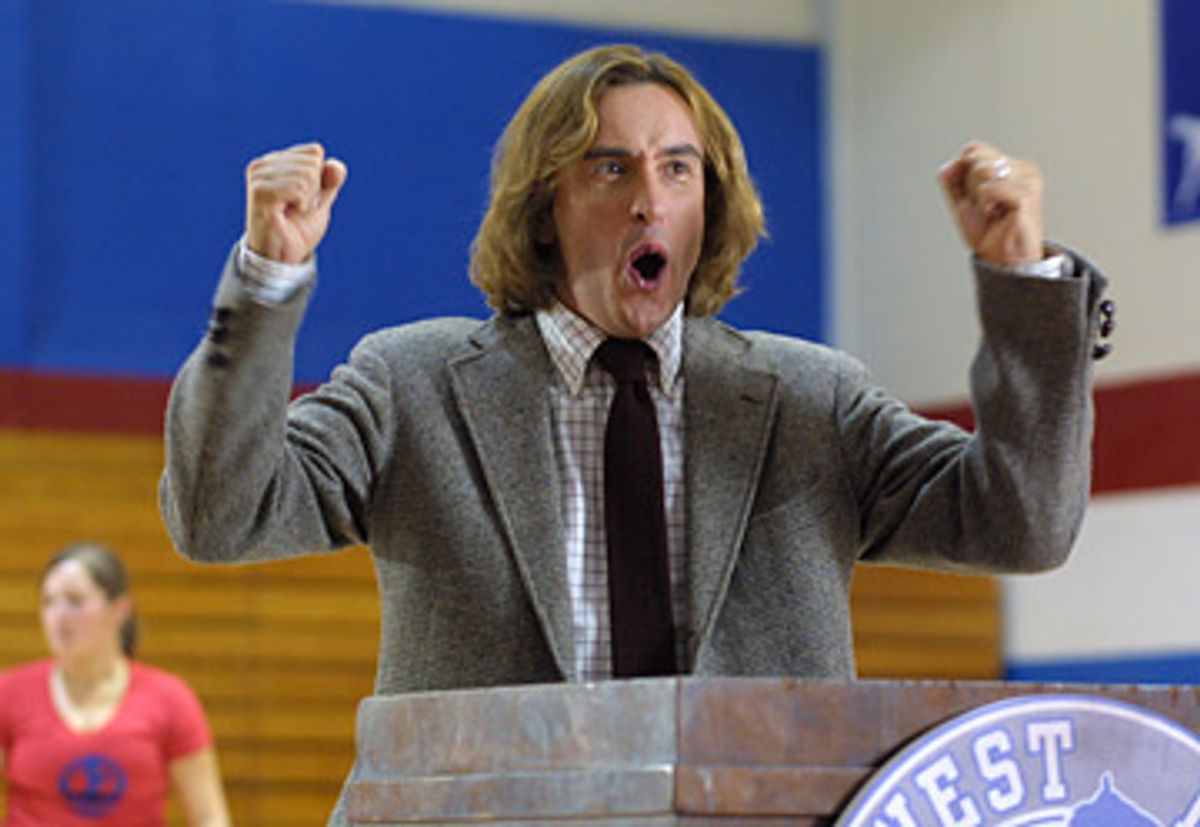 The annals are full of indie pictures that fall short in one way or another but still manage to display their good intentions like resplendent peacock feathers. Andrew Fleming's "Hamlet 2" is definitely the product of good intentions, and probably of hard work. But the picture, which poses as a spoof of inspirational-teacher dramas even as it not-so-secretly attempts to be one, is so wearying that it makes you feel duped for being open to it in the first place. "Hamlet 2" works so hard at being entertaining, in that quirky, Indie 101 sense, that it just grinds you down. It's the class you wish you could sleep through, taught by the guy who's convinced he's the students' best friend.

In "Hamlet 2," that guy is the star, Steve Coogan: As Dana Marschz (the last name is intentionally unpronounceable), a failed actor who has settled for teaching drama to high school students in Tucson, Coogan is so on-point, he's insufferable. Wearing phony-academic tweed vests and corduroy pants in the Arizona heat, rollerblading to school as if to put all his zany eccentricities on display (actually, he's had his license revoked for driving while intoxicated), Dana has found that his greatest role is that of molding young minds, and he plays it to the hilt. Dana is one of those teachers who's driven by the dual need to impart his enthusiasm for his craft to his students and to be the center of attention at all times. His generosity has a selfish edge, and Coogan plays that conflict for laughs. But that doesn't make his character any more tolerable. Catherine Keener plays Dana's wife, Brie, a sharp-edged, impatient creature who doesn't seem to like him any more than we do: The two are trying to conceive a child, but it's obvious that Dana can barely conduct his own life as an adult.

"Hamlet 2" gets dramatic, more or less, when Dana is informed by the school's blowhard principal (played by Marshall Bell) that the school's drama program is to be cut. The reason: Dana and his two star students (played by Skylar Astin and Phoebe Strole, of Broadway's "Spring Awakening") have hardly been wowing the student population with their recent productions. (The most recent was a stage adaptation of "Erin Brockovich.") Then the school receives a sudden influx of transfer students, most of them Latino -- when we first meet them, they're lounging lackadaisically around the classroom, playing their stereotype to the hilt. Dana wonders if he can't inspire them and save his job at the same time, which is how he comes to write an upbeat and controversial Shakespearian musical called -- well, you know.

The idea of revisiting "Hamlet" as a cheerful musical isn't so outlandish: After all, it was recently discovered that Prokofiev originally wanted his own adaptation of "Romeo and Juliet" to have a happy ending. But throughout "Hamlet 2," the jokes are a little too arch, a little too knowing, and Coogan smirks and mugs his way through them so confidently that he erodes everything that might have been potentially funny. Some of the supporting performers are able to cut small, welcome breathing holes into the movie: Amy Poehler shows up as a chipper First Amendment lawyer (with a great name -- Cricket Feldstein) who swoops in like a chattering starling when the principal tries to shut down Dana's play. And Elisabeth Shue plays herself, only in the movie, she's given up acting for nursing. She doesn't miss all the insecurity and self-loathing of her old profession, but she does miss kissing handsome costars. That's the one bad thing about nursing, she concedes, in one of the movie's silliest and funniest moments: You're not allowed to make out with the patients.

But, strangely, the kids who are so central to Dana's livelihood barely register here. Fleming -- who co-wrote the script with Pam Brady, one of the writers of "Team America: World Police") -- doesn't shape the movie so they emerge as distinct characters. In fact, the movie makes a joke out of the way Dana's uptight star students see the Latino "gang bangers" as faceless kids -- but then the movie itself pretty much treats them as faceless kids. Only one of them, Octavio, played by Joseph Julian Soria, emerges as an individual, and even then, just barely.

Until, that is, the movie's last 20 minutes, when "Hamlet 2" finally springs to life. This is when we get to see the musical extravaganza Dana and the students have been working on -- it features a big number called "Rock Me Sexy Jesus," and Coogan himself plays the J-man in fake facial hair, tight jeans and a beater T-shirt. The students prance and shimmy around him -- they seem alive at last, maybe because it's the first time in the movie they've been allowed to do anything.

It's a drag that "Hamlet 2" kicks into action too late. Fleming has made some wonderful pictures, and he has a knack for tuning in to the energy, as well as the hopes and frustrations, of young people: In "Dick," for my money one of the finest comedies of the '90s, Fleming recounted the fall of Nixon from the point of view of two giggly, adorable teenage girls. But "Hamlet 2" has nothing of the spirit of youth about it. Coogan, generally a terrific comic actor, just makes it feel old and tired. His Dana Marschz isn't ceding the stage to the next generation; he's hogging it for himself. And no matter how many jokes you pack around it, arrested development doesn't make for a very compelling dramatic arc.