Anna Faris shines as an ex-Playboy bunny who discovers she can no longer get by on cuteness alone. 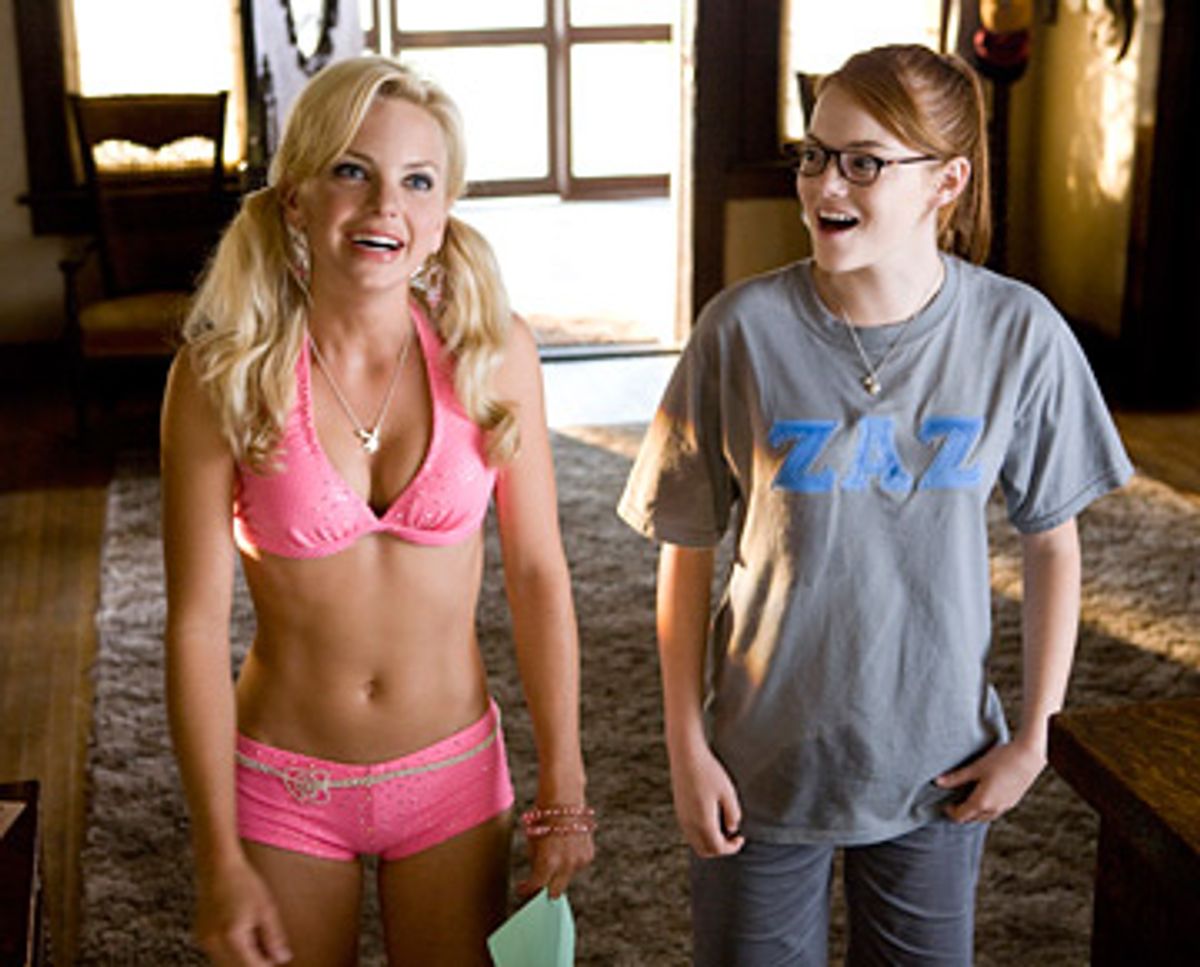 The greatest tragedy that can befall a good summer comedy is to be dropped into one of the late-summer slots, left to drift through the final days of the season like the last remaining kids to be collected from camp. I hope "The House Bunny" can turn potential tragedy to its advantage: This picture about a Playboy bunny -- played by the enormously gifted Anna Faris -- who's ejected from Hugh Hefner's mansion and forced to find her own way in the much harsher real world, is so sweet-tempered and generous that it's likely to be branded as empty-headed, particularly by those who can't be bothered to see it. But I think its sweetness is a flower that grows, stubbornly and resolutely, from a bitter seed. The picture is sharp, in a warm, fuzzy way, about the ways women can sometimes inflict cruelty on other women in the name of feminism. Feminism doesn't have to be the enemy of kindness, but sometimes -- alarmingly often -- it is.

I knew exactly what "The House Bunny" was getting at when, in an early scene, Faris' character -- her name is Shelly, and she totters through the movie in an assortment of pastel platform shoes and Barbie-size short shorts -- having been expelled from bunny paradise, wanders into a campus sorority house. Shelly believes she's been banished from the Playboy Mansion for being too old: She's just turned 27, which, as another character points out, is "59 in bunny years." And so with nowhere to go, Shelly follows a group of giggling, hair-tossing girls -- she's like an orphaned duckling toddling after a random look-alike bird -- to their lavish sorority digs. Shelly has just left a place where she and her bunny-sisters (mostly) get along and support one another, and in her wide-eyed optimism, she thinks she may have found a suitable substitute. The icy-smooth ash blonde who greets Shelly at the door (she's played, as a cartoon superbitch, by Sarah Wright) looks the deposed bunny up and down, registering her Dolly Parton-blond do and puffy, pouty lips, and says, "You do look like an older, sluttier version of the type of girl we would want."

Sisterhood is powerful, all right. But Shelly, whose disposition is so sunny she barely recognizes she's been insulted, finds her way to another sorority, the Zeta house, which is about to lose its charter: Its few remaining members are unpopular, awkward girls, and the house hasn't been able to attract any new pledges. When one of the sisters, an adorably gangly nerd-girl named Natalie (Emma Stone, who played a sharp, groovy minx in last summer's "Superbad"), explains the Zetas' plight, Shelly persuades the girls to adopt her as house mother.

What happens next is predictable, and yet not: Shelly recognizes that these young women need help. One of them, Carrie-Mae (played, marvelously, by comic actress Dana Goodman), is a stooped-over girl in braids who's stayed in school for nine years to avoid having to go back to the trailer park in Idaho from which she came; another, Joanne (Rumer Willis), is locked in an all-metal back brace. Shelly instigates the inevitable mass makeover, teaching the girls how to dress sexier and how to use makeup, most notably enhancing the eyes. ("The eyes are the nipples of the face!" she says authoritatively.) Their confidence gets a boost; and yes, they look a little, well, tarty.

But "The House Bunny" -- which was written by Karen McCullah Lutz and Kirsten Smith (who also gave us "Legally Blonde"), and directed by Fred Wolf ("Strange Wilderness") -- recognizes the limits of artifice when it comes to sexual allure. The sorority sisters eventually see that their makeover, as inspiring as it may have been originally, also requires a corrective makeunder: They need to look like themselves, only better. And Shelly, pursuing the sweet guy she has a crush on, Oliver (Colin Hanks), learns that it's not enough just to be cute and bubbly and to know how to play the game. After a failed date, she wails to her friends, "He didn't fall for any of my tricks."

That line right there may be the key to "The House Bunny": This is a cartoon fantasy of sorts, but it isn't a retrograde one. "The House Bunny" recognizes some of the hard realities of getting along in the bewildering world of men and women. Shy people can sometimes use a few pointers on how to flirt with the opposite (or the same) sex. But the movie also acknowledges the point where flirting turns into manipulation and game-playing. No one in "The House Bunny" is rewarded for using stock feminine wiles; the characters get by only when they use their heads and their hearts.

And so I use my head and my heart in telling you that Faris is adorable: She's got the eyes of a Campbell's Soup kid and the champagne bubbliness of the young Goldie Hawn. Faris -- known for her performances in the "Scary Movie" pictures, as well as for her roles in Sofia Coppola's "Lost in Translation" and Greg Araki's "Smiley Face" -- is almost criminally charming, and her timing is delectable; she puts the pauses in all the right places. When Shelly realizes that she can no longer get by on cuteness alone -- that she's got to have something to say as well -- there's despair in her voice when she asks her sorority friends, "So I have to learn things about things -- and stuff? About -- topics?"

"The House Bunny" crumples a bit in the last 10 minutes: Faris gets a big wrap-up speech that merely sums up everything the movie has already implied with so much warmth and humor. But the finale isn't enough to crush the sly intelligence, or the pleasure, of everything that comes before. "The House Bunny" gets the difference between being openhearted and empty-headed.