Coming soon to a theater near you: Cirque du Soleil, "Rent" and sports in 3-D? 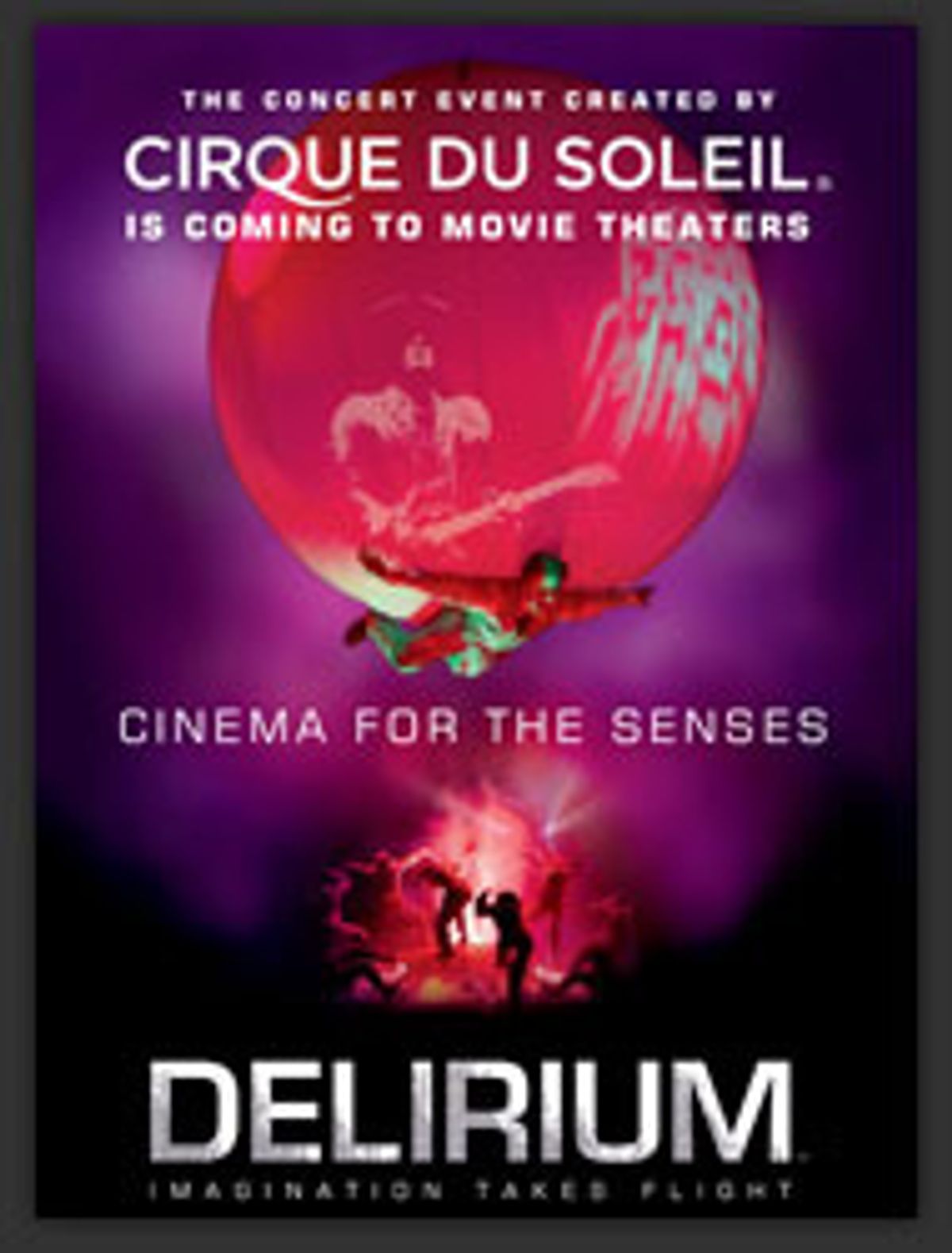 This weekend marks the closing days of the movie screening of Cirque du Soleil's "Delirium," which is currently showing across the country. Now, normally, that wouldn't be such a huge deal, except for the fact that this is a screening of one of last year's performances of the crazy Canadian circus troupe. That is to say, the movie theater is showing something that's not a movie.

Starting earlier this year, Sony Pictures' Hot Ticket has been the distribution mechanism for 500 theaters around the country to show performances, concerts and sporting events in movie theaters, and "Delirium" is just the latest example. The "Delirium" showings are not actually live, but rather recordings of shows from Cirque du Soleil's tour this past season. Still, it's sort of a neat idea -- albeit not a super-cheap one. Tickets go for $20 a pop. Cheaper than seeing the show live, but still not cheap, especially for a recorded performance.

As the New York Times noted earlier this year:

Few think nonmovie content will supplant movies as the primary reason people trek to the multiplex. Rather, the hope is that all the niche offerings will add up to steady supplemental income.

"I love film, but the simple fact is that we can't count on movie attendance to grow," said Thomas W. Stephenson Jr., president of Rave Motion Pictures, which operates theaters in 11 states.

Movie attendance inched up less than 1 percent in 2007, year-over-year, after a narrow increase in 2006 and three previous years of sharp declines -- even as studios pumped out a record number of blockbuster-style pictures. Movie fans bought about 1.42 billion tickets in 2007, according to Media by Numbers, delivering $9.6 billion in revenues.

Don't forget also that "This American Life" did a similar event in May as a way to kick off its second season on television.

More recently, Portfolio's Kevin Maney wrote about how 3-D movies are making a comeback in Hollywood, and how some theaters are now toying with the idea of bringing that same technology to sporting events.


Earlier this year, I visited Pace [Technologies, one of the main companies revolutionizing 3-D cameras for Hollywood] and saw a demo -- and it truly is a different experience from seeing a game on 2-D television. It's not like seeing it live, either, but something different and interesting. As the Pace folks explained, for instance, they discovered that constant cutting to different shots -- a TV staple -- isn't necessary in 3-D. It seems better to let the camera take in the full-court action. Viewers feel a little like they're watching from halfway up the arena seats.

[Dallas Mavericks owner Mark] Cuban experimented with showing a Mavericks playoff game in a theater, and the NBA tried a closed-circuit 3-D broadcast of the 2007 All-Star game, showing it to only 600 people in a Las Vegas theater.

But there are high hopes in both sports and the theater industry around this. Imagine the local theater showing the Super Bowl in 3-D, or the World Cup soccer finals.

Also, my favorite local theater here in Oakland, Calif., the Parkway, is showing the Obama acceptance speech and the presidential debates on the big screen -- for free! Generally I'm skeptical of the idea of watching pre-recorded concerts or other performances on DVD or whatever, but I can definitely see the appeal of live events for shows that are otherwise sold out.