If we must discuss plagiarism, let's talk exorcism too

Republicans and the press love revisiting Joe Biden's past, but everybody -- including the possible GOP vice-presidential candidates -- has one. 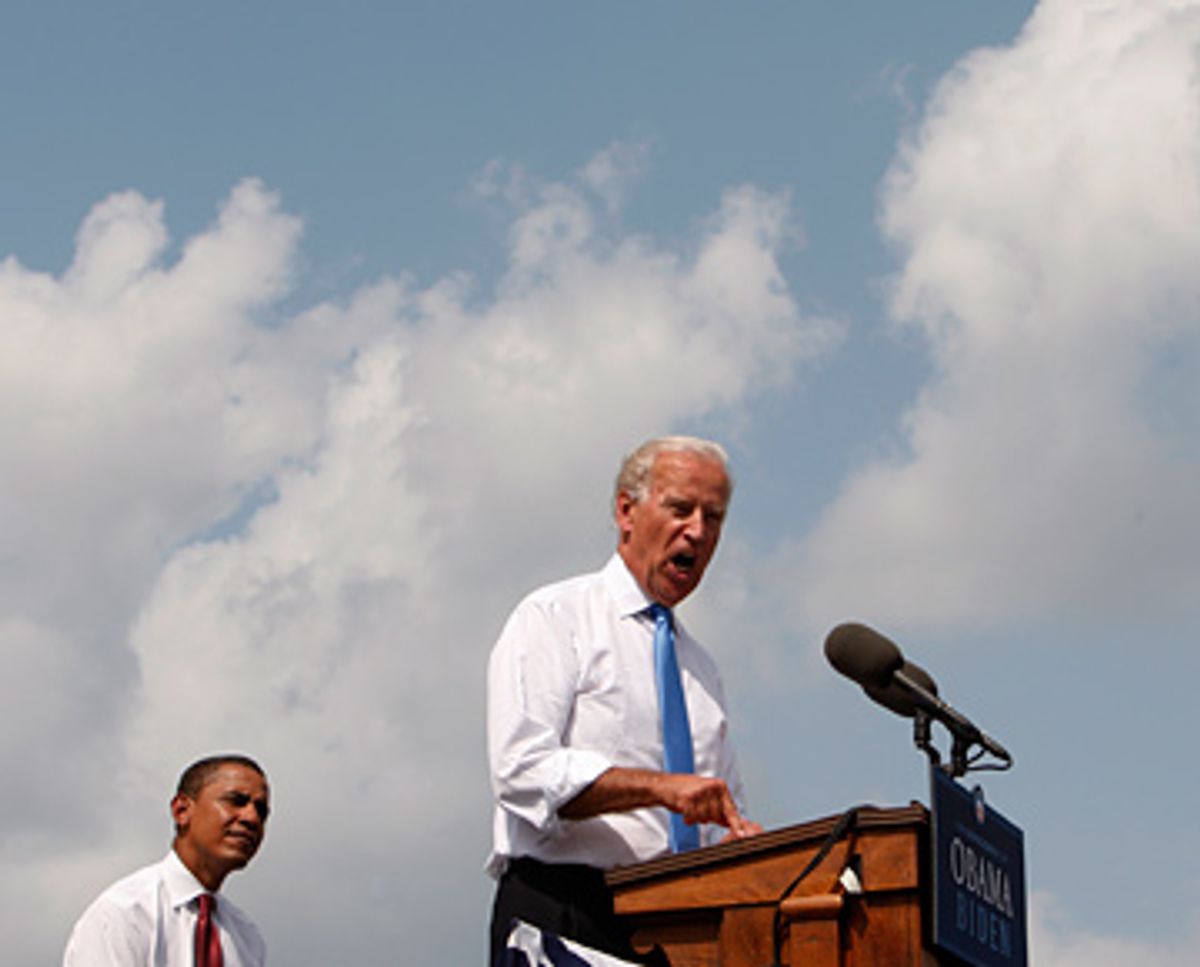 Steeped in the culture of the Senate, Joe Biden can be gracious or pugnacious as circumstances require -- and in the months ahead he can be expected to display both qualities. Certainly he understood that upon accepting Barack Obama's offer to join the Democratic ticket, he would endure a barrage of skepticism and contempt along with the congratulations. But the Delaware Democrat doesn't need anyone to defend him.

Over the past few days, however, the reaction to Biden's selection by the national press corps and Republicans set parameters of fairness for John McCain's vice-presidential choice. Discussion of Biden's real achievements and policy perspectives got short shrift while journalists repeatedly revisited his verbal stumbles and minor scandals.

If we must we pretend that the Republican ads tweaking Obama and Biden represent a serious argument, then we should apply the same standards to the Republicans. If we must constantly revisit the plagiarism flap that drove Biden from the presidential race more than 20 years ago, or the occasional stupidities he has uttered over the years, then we should likewise examine every error and embarrassment that have plagued Republican vice-presidential nominees over the past two decades.

Consider the pattern set by Ron Fournier, the Washington bureau chief of the Associated Press, who reportedly considered a job offer from the McCain campaign two years ago. He responded to the Biden announcement with an "analysis" suggesting that this choice had exposed Obama's lack of confidence, especially in matters of national security and foreign policy, and raised fresh questions about the youthful Democrat's lack of experience -- echoing the snark of McCain's own ads.

Of course, Obama realized that such responses were inevitable from the Republican side if he chose someone with Biden's qualifications -- and he had sufficient self-confidence to do it anyway. But in fairness, let's turn the Fournier-McCain argument around and see how the Republican shortlist measures up. If experience in military and foreign affairs represents the sine qua non of a presidential candidate, then how do Tim Pawlenty, Bobby Jindal and Mitt Romney measure up? Obviously there is nothing relevant in the résumé of Pawlenty, the second-term governor of Minnesota, or Jindal, his counterpart in Louisiana. Romney is older but equally bereft of such credentials, unless he receives special credit for the year he spent as a missionary in France (when he escaped the Vietnam draft).

Their collective void of international competence takes on greater significance in assessing the potential running mate of a man who is not quite an actuarial certainty to finish four years in the White House, about to mark his 72nd birthday and having survived four bouts of melanoma. What Biden once said about "on-the-job training" for Obama would emphatically apply to at least three of the politicians believed most likely to be tapped by McCain.

At least Tom Ridge and Joe Lieberman -- two other possible choices for vice president -- can claim substantive experience in the field of national security. The Connecticut senator wrote the legislation creating the Department of Homeland Security, and the former Pennsylvania governor was confirmed as that department's first secretary after serving in a similar White House position. But when they lay claim to those qualifications, they must also be held accountable for the dismal performance of that department, which has been rife with bureaucratic waste and crony contract deals from the beginning (and the complete lack of oversight by Lieberman's Senate committee).

As for gaffes and miscues, no politician escapes them entirely. So if Biden still has to answer for purloining the words of a British Labor Party hopeful in 1987, then perhaps Lieberman should be asked to explain why he sucked up to Louis Farrakhan in 2000. If Biden's dumb remark about Indian-American grocers must be reprinted over and over again, then maybe Pawlenty's broadcast joke about his wife's reluctance to have sex -- uttered in her presence last spring -- will be aired repeatedly, too. If Biden's conflict with Catholic bishops over reproductive rights is an issue, then surely Jindal's eerie claim to have exorcised demons and cancer from the body of a female friend deserves a thorough investigation.

None of those tales is worthy of enormous attention, especially during an election that could change America so profoundly. But each is just as revealing of character and fitness as anything we have heard about Biden over the past few days. It is safe to say that had he ever professed his enthusiasm for the works of Farrakhan, or publicly whined about his wife's sexual withholding, or recounted a supernatural adventure, the national press corps, cable television, talk radio and the Republican propaganda machine would be churning the stories at top volume.

Elevating the bogus and the petty to cosmic importance is now a tradition in American election coverage, and based on the record so far there is no reason to expect improvement in this campaign. Insofar as the press is bound to dwell on trivia, then let us hope it devotes a fair share of attention to the marginal offenses of that lucky McCain running mate, whoever he (or she) may be.