"Tropic Thunder" inspired protest from disability activists. But why is no one complaining that Robert Downey Jr. is playing a black man? 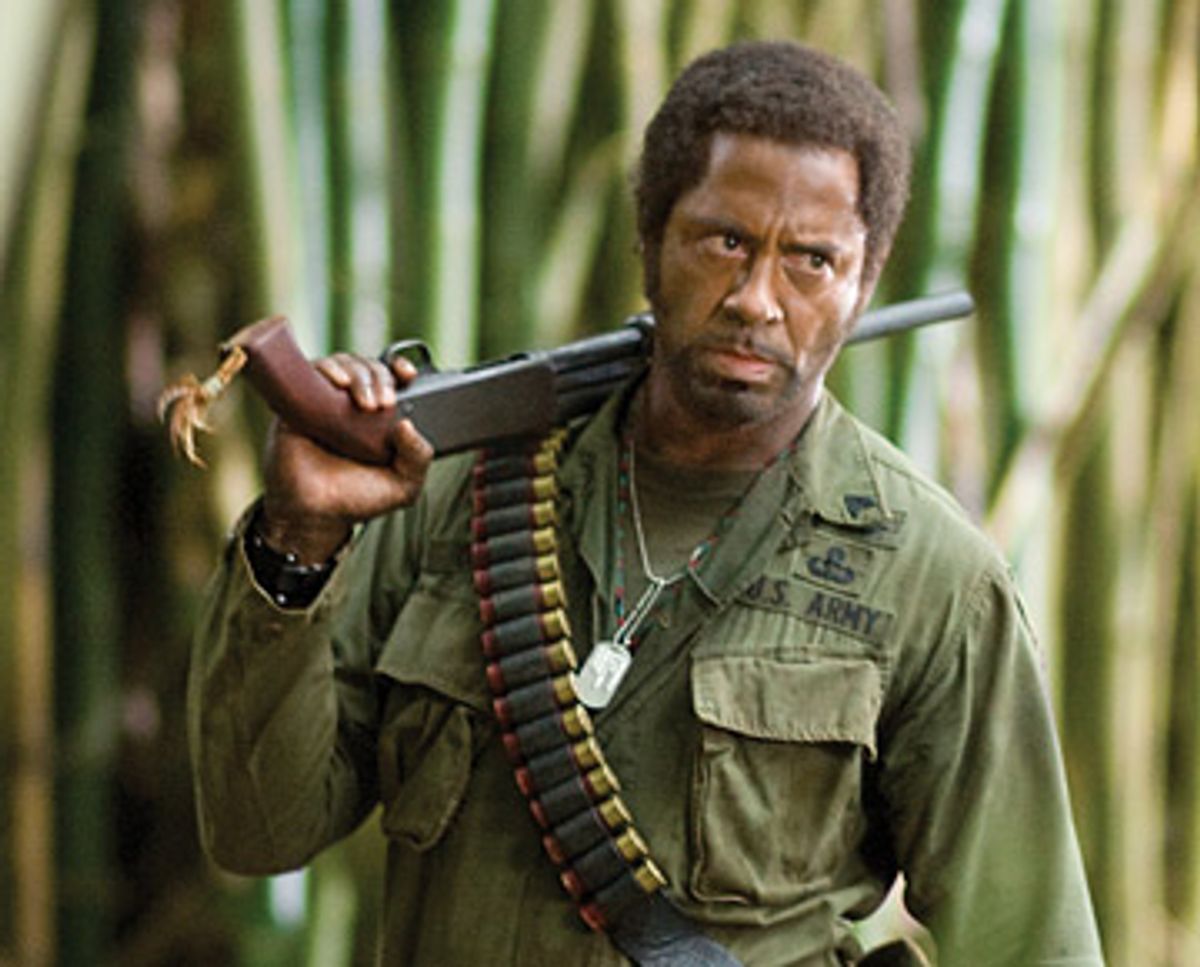 Amid the vocal protest launched by advocates for the mentally disabled regarding the use of the word "retard" in Ben Stiller's box-office-topping meta-comedy/action film "Tropic Thunder," we seem to have missed something. The passionate outrage of groups like the Special Olympics and the American Association of People With Disabilities, which rallied outside the premiere of the film and demanded a boycott, has successfully diverted any negative attention from Robert Downey Jr.'s outrageous turn as an Australian actor who undergoes an unusual skin-darkening process in order to play a black American soldier.

By definition, a white actor like Downey playing a black man amounts to a minstrel act. During slavery, white Southerners began the entertainment tradition of dressing up in slave costumes and makeshift makeup and performing songs and skits that mimicked black musical styles while degrading their servants, portraying them as lazy, stupid and promiscuous. To bring the humiliation and abuse of power at the heart of this gesture to the present day, imagine a group of wealthy California housewives forming a mariachi band and taunting the Latino workers at an orange grove. Even today, long after post-Civil War minstrelsy set black entertainers on the road to the mainstream, any hint that white people are performing in blackface can send black people into paroxysms of anger.

But white folks can't seem to let it go -- from Ted Danson's 1993 faux pas at the Friar's Club to "Soul Man" to white kids dressing up as Barack Obama. You get the impression that if every black person in the United States had to leave the country on business at the same time, they'd come back to find "Amos 'n Andy" back on prime-time TV. So now that Downey has joined the fray of whites who black up, why did no one care?

To start with, Downey's performance is far more complicated and nuanced than some shoe-polish-and-white-gloves variety of shuckin' and jivin', and for this reason it has garnered universal praise from reviewers. Salon's Stephanie Zacharek wrote that "its boldness is ... go-for-broke delightful." In an article titled "Why Robert Downey Can Get Away With Blackface" Esquire.com's Stephen Garrett credited Downey's "singular talent." Downey's performance is undeniably funny, but might white critics also be tempted to overpraise him simply for having gotten away with something so forbidden? New York magazine went so far as to say that Downey "really does make a damn fine Negro," a comment that dips its paternalistic toe further into the tar of racism than anything in Downey's performance.

Downey plays Kirk Lazarus, a ridiculously dedicated Method actor in a Vietnam drama who refuses to break character even when the camera isn't running. A "five-time Oscar winner," Lazarus has sought to fully inhabit his character, a headstrong black infantryman whose bravery and loyalty save his unit. This cinematic cliché deserves the fresh, committed attack Downey lavishes on it. He skewers Russell Crowe, delivering the performance the actor might have given had he landed Anthony Hopkins' role as a biracial man in "The Human Stain." Brilliantly, Downey sinks into Lazarus' role without ever taking him completely seriously, never letting us forget that Lazarus is attempting to pass for black, not Downey. "I'm the dude playing the dude disguised as another dude," as Lazarus fumblingly explains. The Aussie's characterization is noticeably off -- he adopts contemporary slang a Vietnam-era soul brother couldn't use; he flares his eyelids just enough to graze the surface of an offensive caricature; he deepens his voice in a way that suggests Laurence Fishburne, but with just a touch of Oscar the Grouch. And as Manohla Dargis pointed out in the New York Times, Lazarus is "the most recognizably human character in a lampoon rife with caricatures."

"Tropic Thunder's" film-within-a-film device also helps circumvent the truly offensive suggestion that Lazarus is meant to represent an authentic black person. Films that don't expose their artifice so nakedly wouldn't -- and haven't -- fared as well. Angelina Jolie created an uproar in the biopic "A Mighty Heart" merely by playing a woman who is biracial in real life, which isn't a case of minstrelsy so much as revisionist history. Since Lazarus' role has been framed as the misguided stunt of a pretentious actor and a crew that is obviously living in oblivion, we never get the impression that the real filmmakers unselfconsciously thought of blackface as a sound artistic choice. Instead, we can see they've adopted the time-honored method of creating critical distance that Mel Brooks used to turn "The Producers'" "Springtime for Hitler" musical into a laugh riot rather than a race riot.

In the faux film, we also don't know exactly what Lazarus did to blacken himself, and we never see him darkening his skin. If we watched him applying dark makeup -- burned cork, for example, the substance performers used in the old days -- we'd make the connection instantly. We know that it is a "controversial procedure" (some writers have called it "skin grafting," weirdly) apparently so thorough that it requires medical supervision. But in the real world, a spray-on tan, a pill or even a tanning bed could achieve the sort of results we see in Downey's complexion. After all, Lazarus isn't attempting to pass for someone as dark as Wesley Snipes. This sleight of face invites us to laugh at the lengths to which Lazarus is willing to go to create a relatively cheap-looking negritude without questioning how he arrived at his black look. Toward the end of the film, he removes that woolly wig quite handily.

Stiller clearly recognized that "Thunder," and Downey's part in particular, had a lot of power to offend. But he also understood that comedy is nothing without risk taking, and if you push the right buttons in the right way, you can hit the top of the box office chart. For this reason he prescreened the film for the NAACP, and its lack of uproar has served as a tacit endorsement. (He might have thought to do the same for the Special Olympics, though it has focused on the use of a single word -- retard -- and not Stiller's sendup of films about the disabled.)

Similarly, Web sites like DiversityInc and BlackVoices.com have approached Downey's performance in questioning, rather than outraged, terms: The former asked, "Is Tropic Thunder Offensive to Blacks ...?" and the latter announced, "'Tropic Thunder' to Make Blackface Funny."

Maybe black people have weathered enough of these controversies to know which battles are worth fighting. That the joke in "Tropic Thunder" is ultimately on a white person (Lazarus, as with the Wayans brothers' whiteface sister act, "White Chicks") must also help smooth over any debate.

Nevertheless, "Tropic Thunder" does a great deal to neutralize Downey's blackface, even beyond the actor's winking bravura performance. Those who considered Jolie's foray into cross-racial casting offensive because they felt she had taken away a role from a black actress will find that Stiller and company have more equal-opportunity hiring practices. They've provided a foil for Lazarus by casting black comedian Brandon T. Jackson as a product-placement-crazy rapper turned actor named Alpa Chino, who can't stop hocking his "Booty Sweat" energy drinks and "Bust-a-Nut" health bars. Perhaps because he's a stereotype himself, and aware of his inauthenticity (he may be gay, but his hit single is called "I Love Tha' Pussy"), Chino, though irritated, is relatively unfazed by Lazarus' grab for blackness. He retaliates by invoking weak Aussie labels of the "shrimp on the barbie," "dingo ate my baby" variety.

Tensions erupt only when Chino refers to the Australian Lazarus as a "kangaroo-hopping nigger," at which point Lazarus launches into a sanctimonious faux-Negro speech denouncing Chino's use of the N-word that unravels so completely that it trails off into the lyrics of the theme song from "The Jeffersons." This is a genuinely fantastic, multilayered and comical moment, a joke with a blade that cuts in so many directions that all you can do is stand there and laugh as you bleed. Lazarus' hubris gets its comeuppance, certainly, but the confrontation also ridicules Chino's desire to fight one kind of bigotry with another, and takes the piss out of the race-proud moralizing some pompous black folks indulge in.

Stiller's actually laziest when it comes to satirizing his own ethnic background -- Jewish showbiz people. In the context of so many potentially offensive ethnic portrayals, Les Grossman, the money-hungry power-Shylock producer who bankrolls the film, played with uncommon gusto by Tom Cruise in old-face, Jew-face and a chest wig too, stands out as perhaps the most conventional negative stereotype in a film that otherwise has figured out a highly sophisticated, thoughtful way to surprise and provoke -- not to mention bewilder -- its audience, distributing mockery equally, with a minimum of real prejudice.