Hillary Clinton targets the Republicans -- and her loyalists who have been unwilling to give up the good fight. 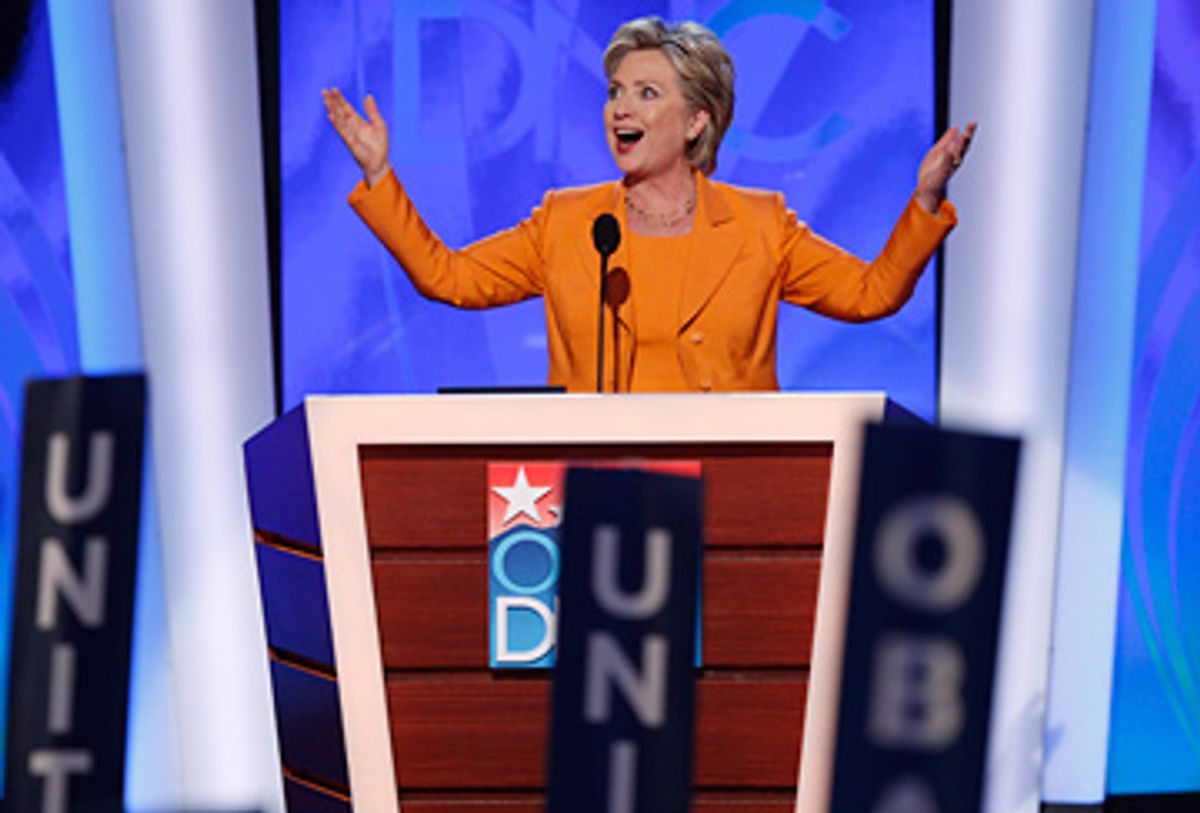 Hillary Clinton's job seemed impossible Tuesday night. In one half-hour prime-time speech, she was expected to win over the estimated quarter of her voters holding out on Barack Obama, get more of her big donors to open their wallets, quiet rumors that her husband is still smarting over the bitter primary race, and say enough glowing things about Obama to get John McCain to stop using her in campaign ads.

She was expected to do all that without revealing any of the pain of a bruising primary battle, the fresh hurt of being passed over as the vice-presidential nominee in favor of Sen. Joe Biden, or the pride in her campaign that's led some Obama supporters to feel she's been insufficiently deferential since her defeat. All while news organizations speculated about her choice of pantsuits for her big night.

There may be critics -- for Clinton, there always are -- but she hit all her targets Tuesday night, even working in a joke about her pantsuits. She wasted no time on preambles, declaring herself "a proud supporter of Barack Obama" in her first sentence, and immediately reaching out to her still smarting supporters: "Whether you voted for me or you voted for Barack, the time is now to unite as a single party with a single purpose. We are on the same team, and none of us can afford to sit on the sidelines."

Maybe as important, in a convention that's so far been short on huge applause lines and McCain attacks (Montana Gov. Brian Schweitzer was Tuesday's fiery star, while official keynote Mark Warner disappointed), she went after Obama's opponent with humor and ferocity. "You haven't worked so hard over the last 18 months to suffer through more failed leadership: No way, no how, no McCain." Later she got a huge hand when she said that McCain's policies are so close to the Bush administration's, "it makes sense [they] will be together next week in the Twin Cities. Because these days they're awfully hard to tell apart."

Clinton told delegates "what a presidential election is really about" with a walk through some of her signature issues and stories from the campaign trail: an uninsured mom with cancer, a wounded Marine, the young boy worried about his mother making ends meet on the minimum wage. She added a new twist, again speaking to recalcitrant supporters, saying: "I want you to ask yourselves: Were you in this campaign just for me? Or were you in it for that young Marine and others like him? Were you in it for all the people in this country who feel invisible?"

While the short film that preceded Clinton's speech played up her mother, Dorothy, and her daughter, Chelsea, and featured Bill Clinton only to label him "Hillary's husband," she got in a nod to her spouse (and maybe a tiny bit of implicit criticism of the Obama campaign) by reminding the audience that she knows Obama can "revitalize our economy, defend the working people of America, and meet the global challenges of our time" because "Democrats know how to do that. As I recall, President Clinton and the Democrats did it before. And President Obama and the Democrats will do it again."

But she spent most of her time listing reasons for Democrats to vote for Obama, reminding voters he "began his career fighting for workers displaced by the global economy. He built his campaign on a fundamental belief that change in this country must start from the ground up, not the top down." She praised Michelle Obama as a "terrific partner" and Joe Biden as "a strong leader and a good man ... pragmatic, tough and wise."

So was it enough, either to win over stubborn Obama-skeptics in her fan base, or to stop the media from saying she isn't doing enough to try? Nothing will be enough to do all that, but it was a start. Earlier in the day Tuesday I watched her try to woo women voters in two very different settings. Die-hard supporter Susie Tompkins Buell, who had until recently sworn not to come to Denver, changed her mind and organized an event for WomenCount.org, the group that grew out of her and others' fury at primary-season sexism about Clinton, that she's calling a MoveOn.org for women. It was heavy on Obama skeptics: I saw several "Nobama" buttons, watched a delegation from "Clintons4McCain" march through the crowd, and listened to filmmaker Gigi Gaston, who was promoting her documentary "We Will Not Be Silenced," which alleges that Obama victories in caucus states were due to voter fraud. (To be fair, many women wore red buttons that said, "Hillary supports Obama and so do I.")

With Chelsea by her side, Clinton made a brief appearance to thank her supporters and rally them behind Democrats, but she didn't mention Obama by name, which was a little surprising. "The Democratic Party represents a much better future for everything we care about. I will be making a strong case that we must stand behind our nominees," Clinton said, adding, "We can't afford four more years of a Republican in the White House." Maybe she felt that, in that crowd, it was better not to risk anti-Obama boos.

But less than an hour later, at the Emily's List gala event a few blocks away, she offered a passionate endorsement of Obama and Joe Biden. "Barack and Joe will stand with us and fight for us ... I ask all of you who worked so hard for me to work as hard for Barack Obama." She was even more enthusiastic about the prospective first lady, asking the group, "Wasn't Michelle Obama terrific last night?" In what might have been a sly dig at her former rival, she added: "I know a little bit about how the White House works." She continued, "You know, if the president is not exactly on our side, call the first lady. And with Michelle Obama, we're going to have someone to answer that phone."

Clinton's party-unity task wasn't made easier by the fact that, by the time she took the floor Tuesday night, there was still no clear information about how the roll call vote would work Wednesday, which frustrated some supporters. Around 4 p.m. Ann Lewis told a clutch of reporters at the Emily's List event that she still didn't know how it worked, but she tried to play down reports of friction between the Clinton and Obama camps. At the WomenCount event New York Rep. Carolyn Maloney attempted to do the same. Most of the women present "were still in mourning" over Clinton's loss, but would support Obama. She minimized reports of massive Obama defections, saying, "Republicans are trying to separate us," pointing to McCain ads using Clinton against Obama and adding: "We can't let them."

The McCain campaign e-mailed out its reaction minutes after Clinton left the podium: "Senator Clinton ran her presidential campaign making clear that Barack Obama is not prepared to lead as commander in chief," spokesman Tucker Bounds said. But one thing seemed clear Tuesday night: We probably won't be seeing this Clinton speech in a John McCain ad any time soon.