Bill Clinton shows -- and gets -- the love

"Barack Obama is ready to lead America," he tells an adoring crowd -- and suddenly Clinton haters who predicted mayhem in Denver are 0 for 2. 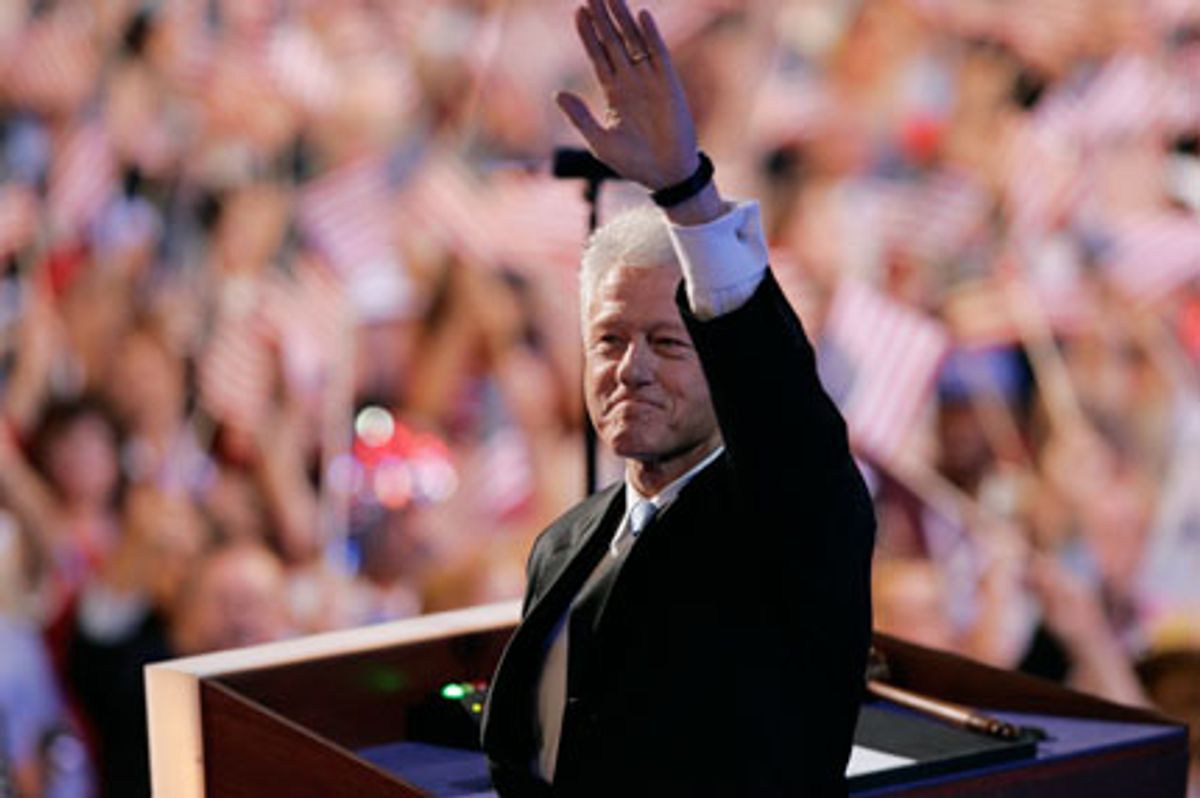 All day long the cable talkers had their Clinton drama story line down: When Hillary Clinton pointedly asked her Obama-resistant admirers Tuesday night, "Were you in it just for me?" she was also talking to her husband.

Barely hours after Sen. Clinton got her media critics to sheath their knives with a stunning speech endorsing Barack Obama Tuesday night, critics had a new but depressingly familiar story line: President Bill Clinton would never match his wife's enthusiastic backing of her former rival -- and if he didn't, her efforts to heal the party would be diminished. It was clear all day Wednesday that pretty much no matter what Bill Clinton said, the supposedly sulking former president could never be gracious enough, even after his wife moved to nominate Obama by acclamation partway through the roll call a few hours before he spoke. For the second night in a row, then, one of the Clintons had been assigned an impossible task, with lots of risk for failure but little reward even for doing it right.

But now the cable doomsayers are 0 for 2 with their hand-wringing Clinton predictions. MSNBC's Chuck Todd had earlier reported some Democrats' worries that Clinton might face boos -- worries that seemed particularly ludicrous once wild cheering and frenzied flag waving erupted when Clinton took the podium at 7 p.m. sharp. He tried to quiet the crowd with "thank yous," but they just got crazier, giving him a much longer and louder welcome than his wife.

"I love this, and I thank you," he told the crowd, "but we got important work to do tonight." Like his wife on Tuesday, he wasted no time doing what he came to do: "I'm here, first, to support Barack Obama. And second, I'm here to warm up the crowd for Joe Biden. I looooooooove Joe Biden, and America will too."

Clinton took a short and probably earned detour back through the primary campaign, which he noted "generated so much heat, it increased global warming." He then praised his wife: "I'm really proud of the campaign she ran; proud that she never quit on the people she stood up for." But then he got back to his point. "Hillary told us in no uncertain terms that she'll do everything she can to elect Barack Obama. And that makes two of us. Actually, that makes 18 million of us, because, like Hillary, I want all of you who supported her to vote for Barack Obama in November. Here's why."

Like his wife the night before, Clinton rolled through the litany of problems facing the country, including "foreign policy and national security challenges" he said Obama was ready to face. Clinton went even farther than his wife in pronouncing Obama ready for those military challenges, though the quibblers -- and the McCain campaign -- may find one section to parse, when Clinton seemed to suggest Obama needed Biden's foreign policy experience behind him. "With Joe Biden's experience and wisdom, supporting Barack Obama's proven understanding, insight and good instincts, America will have the national security leadership we need."

Clinton also helped Obama by delivering a speech that ought to help the party realize that a stirring, partisan, activist economic message is its big winner this year. Leading off by arguing, to wild applause, that "people have always been more impressed by the power of our example than by the example of our power," he pointed to "the example the Republicans have set," and zeroed in on declining wages despite higher productivity, healthcare troubles, rising poverty and income inequality. He got one of his biggest hands by blasting "the assault on unions." He concluded: "America can do better than that -- and Barack Obama will."

Finally he did what many strategists have urged Obama to do: He pointed to similarities between the Democratic candidate in 2008 and 1992. "The Republicans said I was too young and too inexperienced to be commander in chief. Sound familiar? It didn't work in 1992, because we were on the right side of history, and it will not work in 2008 because Barack Obama is on the right side of history." He closed with a call "to join me, Hillary and Chelsea in making Senator Barack Obama the next president of the United States," and the crowd went wild again.

To be fair, it wasn't as if the cable grumblers had nothing to worry about. The strain and tension among some in the Clinton camp was palpable. Late Tuesday night I collided with a drained and exhausted Clinton intimate leaving the Pepsi Center, who asked, half-proud, half-saddened: "Wasn't she great? She did everything she had to do. And now he has to do it all again tomorrow night."

The Obama campaign and convention organizers didn't do much to make it easy for Clinton. He had to follow his former friend Rep. Jim Clyburn on the podium by about an hour; a nice word from Clyburn about the Clintons would have gone a long way to healing the rift that emerged in primary season when Clyburn began suggesting that both Clintons' attacks on Barack Obama could be seen as racially insensitive. Clyburn failed to mention either Clinton. He spoke in the same hour as former friend Gov. Bill Richardson, who watched the Super Bowl with his buddy, reportedly promised not to endorse Obama, and then reneged.

But Clinton was warmly introduced by Rep. Kendrick Meek, an African-American from South Florida, perhaps in an effort to chase the unfair sting of racism charges. Meek called him "one of the greatest presidents of the United States of America" and said he showed the nation "what America can accomplish when a Democrat is in the White House is a wonderful thing": Lowest unemployment rate in 40 years; poverty rate 20 years; crime rate 27 years, all while inheriting a deficit and leaving a record surplus. Then Clinton took the podium and made those memories real. He left the stage to U2's "Beautiful Day," which then strangely segued into Robert Palmer's "Addicted to Love" -- although the band cut off the refrain but the crowd shouted out the line they dropped: "You might as well face that you're addicted to love." A reference to the former president's love life, or rank and file Democrats' love for Clinton? Whatever, the night made clear that the party isn't ashamed of its only two-term president in modern history, no matter what you hear from cable pundits and bloggers daily -- and that's good news not only for Bill Clinton, but for Barack Obama.