Advice to Obama for his historic speech

Five Democratic wordsmiths offer up their do's and don'ts. 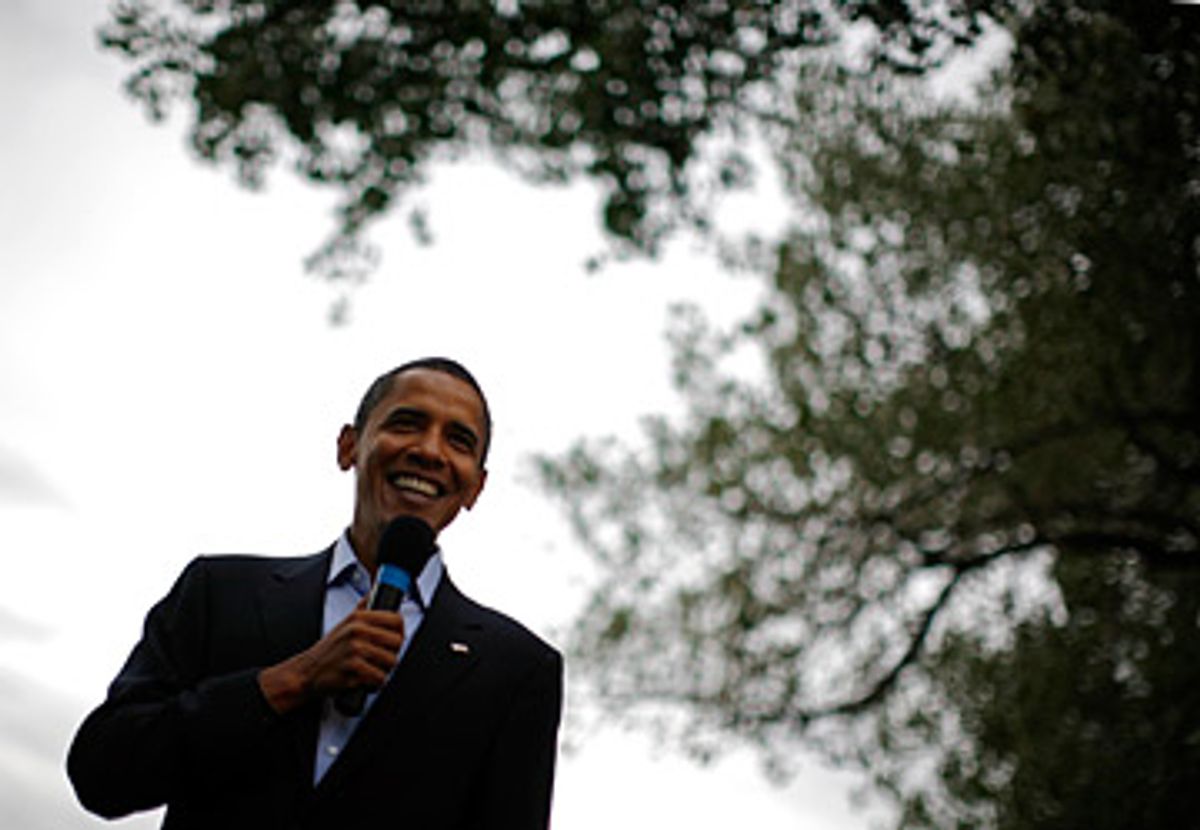 There are few moments more stirring in politics than when a great orator delivers a great speech. This is especially true when a great deal is at stake, or the exigencies of the moment call for something special. Speeches are more than mere words: They can change the national discourse and, consequently, the course of the nation. Though acceptance speeches delivered by the presidential nominees at their party conventions are not as urgent as speeches delivered by presidents in wartime or other moments of national or international crisis, for each party's nominee the acceptance speech is arguably the most important one of the electoral season.

In Denver Thursday night, Sen. Barack Obama will deliver what could be remembered as the best speech of his political life -- at least to date. That is saying something, given his performance four years ago as the keynote speaker at the 2004 Democratic National Convention in Boston, his rousing victory address last January in Des Moines after he won the Iowa caucuses, and the stirring sermon-speech on race relations in America he gave in Philadelphia this past spring. Though the context for each of those speeches was different, the exigency was greater at each successive moment: The first signaled his emergence as a new force in Democratic politics; the second hallmarked his surge to the level of certifiable presidential contender; and the third was delivered when his rise to power was most imperiled.

Salon invited current and former Democratic wordsmiths -- people who have written for some of the most notable and influential Democrats nationally, including presidents, vice presidents, presidential nominees, members of Congress and Cabinet officials, among others -- to offer their advice to Obama for his speech. We asked them for some do's and don'ts, on matters of either substance or style. The abbreviated, speechwriting-relevant biographies of our five participants follow.

Wendy Anderson is a Democratic staffer on the Senate Homeland Security and Governmental Affairs Committee. She has written speeches and policy papers for a number of top national Democratic officials.

Michael Cohen is author of "Live From the Campaign Trail," a book about presidential campaign speeches. He has written speeches for Chris Dodd and Bill Richardson.

Dan Gerstein is president of Gotham Ghostwriters, which is blogging on previews of DNC convention speeches. He has written speeches for Joe Lieberman.

Mark Schmitt is executive editor of the American Prospect. He has written speeches for Bill Bradley and, as a condition of participating, Mark insisted on clarifying that he did not write Bradley's widely regarded as disastrous 1992 keynote address.

I try to use the "Sorensen formula" for speechwriting: brevity, clarity, charity and levity. A really good speech comes from listening to people as well; it should be crafted with all that Barack Obama has heard in the last 18 months. A speech of this importance should also lay out a vision -- where we've been, where we are, in what direction he believes we need to move. The speech should be the finger-pointing us to the future.

At the same time, soaring rhetoric, if not grounded in policy and programmatic specifics, becomes cheap talk and doesn't alleviate the real concerns and anxiety people have. People may "feel good" after a speech, but that's not what a good, effective speech should do. In other words, the speech has to do real work, some at the level of emotion and some at the level of just plain old information. There has to be content and action. And finally, ask for help -- ask the audience for help, expressing that you need them in some way.

Obama's mission for Thursday night is relatively simple: Dance with the girl what brung you. Since his keynote speech at the 2004 Democratic convention and through a grueling primary campaign versus Sen. Hillary Clinton, Obama has sounded a consistent message of political change. It's the essence of his political appeal and his identity as a national politician, and it should be the central theme of his acceptance speech on Thursday night.

For that change theme to resonate even more deeply, Obama must frame his message of change as one that stands in sharp contrast to what he describes as "more of the same" from John McCain and the GOP; he has to make the change he is advocating seem comfortable and not risky. Finally, he must lay claim to the mantle of hope, optimism and national unity that is the most stirring element of Obama's rhetorical appeal.

Given that Obama's primary audience has to be the unsold swing voters who will decide the election, he should bring his soaring rhetoric down to earth and be far more concrete in describing his vision, his ideas for solving the big problems Washington has punted on for years and, not least of all, how he is going to achieve the change he is promising. Just as they don't know much about Obama's character, most of the swing voters he needs to persuade know little about his plans for the country -- a complaint we have been hearing with increasing frequency over the last couple of months.

This is not an argument for another yawn-inducing laundry list of policy proposals, but for highlighting a few big priority issues and a few standout ideas that will help you connect with voters who are eager for fresh, independent-minded thinking in Washington.

Do show some passion as an advocate for working people. Working Americans are really hurting. Obama needs to show he really feels their deep economic insecurity and is taking up their cause with a sense of advocacy, urgency and passion. Also take some risks and say something surprising. Everyone knows Obama can give a great speech. Now people need to see he is willing to spend some political capital to put some big, surprising ideas on the table.

Go after McCain, hard. Obama's vision of a new politics tries to rise above old-style attacks. But the fact is, elections are about choices, and he needs to define this choice more clearly and forcefully. Finally, reintroduce yourself. Even with all the coverage Obama has had, a lot of people don't really know much about his life story. He needs to tell it, as if he's introducing himself for the first time, stressing his family's humble roots and his "improbable journey," including his impressive efforts in Chicago on behalf of working people. You need to tell us at least one thing about you we don't already know.

Remember just how eloquent substance can be, in the right tones and with passion. Some of the best-received speeches in recent political history were Bill Clinton's State of the Union addresses, which were laundry lists of policy. People need to learn a little more about who you are, but they want to hear a lot more about what you would do to change our future -- not because they want to know the details, but because they want to believe it's possible. Don't let anyone tell you that you have to choose between those, or between eloquence and substance. The great advantage of being a great speaker -- Ronald Reagan's advantage -- is that you can make any kind of speech work.

Don't drone on and on aimlessly. Think of Bill Clinton's horrendous 1988 convention speech. Don't talk down to your audience: Include them. Avoid long, complicated sentences. Finally, know the attention and patience span of your audience.

Sometimes it seems as though Democratic partisans would prefer to show the world they are smarter than the candidate/campaign rather than play the part of the loyal soldier. The Obama campaign seems oddly unaffected by the chattering classes, with campaign spokesman Robert Gibbs even going so far as deriding the "handwringing" among Democrats.

Obama should not beat around the Bush in attacking McCain -- especially on his supposed strength, national security. The Obama campaign knows that their best hope of cementing their structural advantage in this election cycle is to hang the Bush albatross around McCain, and frame the race as a clear choice, with the alternative being more of the same polarization, division, destructive economic and foreign policies that Bush brought us. The ideal place to start this offensive is with the war on terror -- slam Bush and McCain for failing to capture Osama bin Laden, diverting our attention from al-Qaida by prosecuting a wasteful, unnecessary war in Iraq, and making us less safe in the process.

Don't worry about announcing some new buzz phrase, like "New Deal." Although FDR introduced that phrase in his first convention speech, it was pretty much by accident, and mostly those kind of phrases come later, during inaugural addresses or when presidents introduce their legislative agendas.

Don't talk about national security with the slightest bit of defensiveness. Yes, Americans will be listening to hear if this guy has what it takes to be commander in chief. But they are plenty concerned about the reckless, out-of-touch national security policies of the past eight years, which John McCain would pretty much continue.

Don't do the special-interest litany. One of the great sand traps for Democrats in such speeches is the sense that they have to acknowledge every interest group in the Democratic Party.

And don't be overly serious. Both Obama and his wife have amazing thousand-watt smiles, and you can feel them winning votes by the truckload every time they take a break from the serious policy bits to pause, loosen up, smile and laugh a little. Take a lesson from Montana Gov. Brian Schweitzer, who brought the house down by breaking up his serious points with sections that were more casual and fun.

Don't pay too much attention to do's and don'ts. I watched an excerpt of your 2004 keynote address the other night at the Pepsi Center: The most memorable passage broke a major rule; it was terribly rushed, without a pause or an emphasis. When you seem to care about what you're saying -- and it helps if you really do -- you can afford to break some rules.