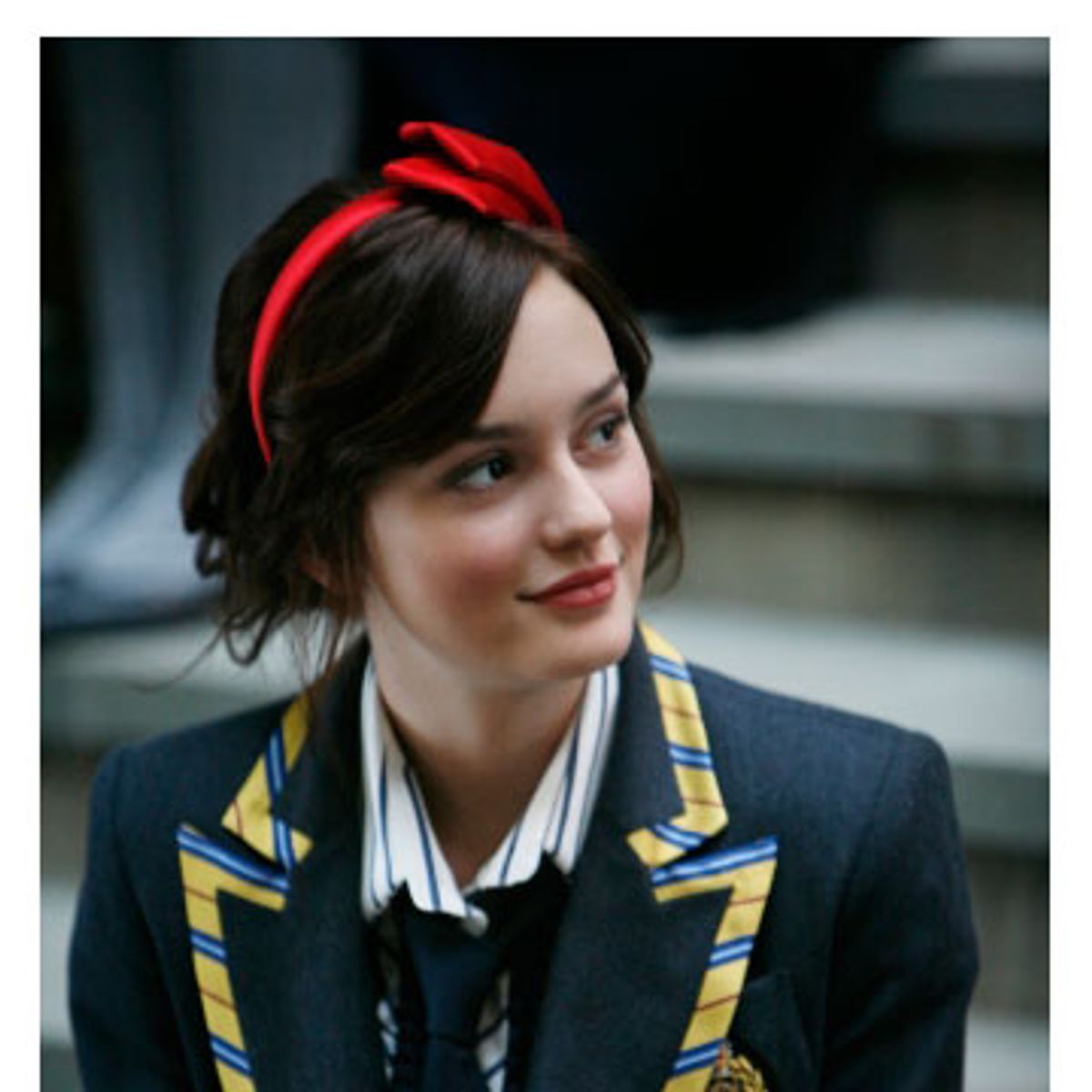 I'll never forget the first time I met my very own Blair Waldorf. I was in eighth grade and I was walking down the hallway when a pretty girl stepped out from a row of lockers. "Nice pants," she said, staring at my jeans, her voice dripping with sarcasm. "I can tell you've had them hemmed." Her group of friends giggled behind her as I stared, terrified and confused. Yes, my pants had been hemmed. I didn't know why that was a bad thing. But I knew that this girl thought it was, and the way she spoke, with a pout and an icy look in her eyes, suggested that she was not someone people disagreed with.

Every week on the CW's teen melodrama "Gossip Girl," I'm confronted with the same pout and the same icy stare. It appears whenever Leighton Meester, as the Upper East Side's resident bad girl, Blair Waldorf, struts onto the screen. While the show, about the double-crossings and sexual exploits of a group of wealthy Manhattan teenagers, is chock-full of pretty people and scandalous content, the most engrossing part of it is Meester's performance as Blair -- not only because watching her eviscerate less-worthy opponents brings up deep-rooted and traumatic memories but also because Meester, with her porcelain-doll face and outrageous designer outfits, actually makes you want to root for her.

Meester, whose previous credits include "Entourage" and "Seventh Heaven," brings a finely tuned bitchiness to her character that, given media reports, may not be entirely an act. She has been notoriously snarky to reporters seeking her comment at public events, and gossip columns were abuzz earlier this year about a growing feud between her and her costar, Blake Lively, who plays her best friend, Serena van der Woodsen, on the show. Whether true or not, these accusations have helped make Meester a household name (especially in households with young teenagers) leading up to "Gossip Girl's" second-season premiere on Sept. 1.

Salon spoke to Meester over the phone about the show's racy new ad campaign, her character's sexual appeal to grown women, and what it's like to be a 22-year-old in the media spotlight.

There seem to be a lot of adults who enjoy "Gossip Girl" as a kind of guilty pleasure -- I know three professional women who work high up in TV and have this obsession with your character in particular. One of them said Blair is the only person she would ever go bisexual for.

Obviously the show is intended for a largely teenage audience, so why do you think that older women respond to Blair Waldorf like that?

I think you're hanging around some weird people. [Laughs] Just kidding. Most people might be weirded out by that, but I find it to be very endearing and flattering.

As much as she does and says outrageous things and isn't the nicest person in town, I think that Blair is what a lot of people wish they could be. She's got really good fashion and she lives in a gorgeous apartment and she's got tons of money and she's very well taken care of, well coifed, has beautiful boys surrounding her, all this stuff. I think that a lot of women also relate to her because she is imperfect and she has her insecurities. And also, she's quite sexual, if that's what they're saying.

Yeah, and it seems like a lot of people have, at some point, had horrifying experiences in high school with someone they want to be but also hate at the same time.

That's what I was trying to say. You hate to love her.

Every day on my way to work, I walk past this enormous billboard of you in a pool making out with somebody with the words "A nasty piece of work" next to your head. I assume you've seen these, too. How does it feel to be splashed around the city as a threat to our country's youth?

But I think it's good. It's using what people have said against the show to make it look better and make them look silly. We're owning up to the fact that, yes, it is racy, and, at the same time, it's a smart, funny way of giving people a warning. It's for entertainment purposes, and if you don't like that, don't watch it.

There's also been this emergence of meta-gossip around the show. The show itself is about gossip, but Gawker and New York magazine have had this kind of obsession with the cast. Is that something you were prepared for?

I didn't really expect it. It's come in such a slow wave. I'm not necessarily a huge fan of all the gossip, but I think it just goes to show that more people are watching the show.

There are reports of you getting stoned in restaurants and of fights on set -- is there anything that's popped up online that's really pissed you off?

Not really. I'm disappointed and unhappy when I have to hear people saying stuff about Blake [Lively] and me fighting in real life. I think that's the most ridiculous thing I've ever heard. Because we're not fighting in real life. And you just want to go to that person and just be like, "You're an idiot, you don't know." But you can't really, because people are going to say whatever they say.

Do you, on some level, also enjoy the negative stuff, because it seems to be part of the viral marketing of the show?

I don't necessarily enjoy negative gossip, especially about me or the show. But people like to see it. People want to see drama in real life, which is understandable. It would be boring if we all got along.

Are you annoyed that you can't do the kind of things as a young person that you would otherwise be able to do?

No, because I have a ton of fun. I don't hold back on the fun things that I want to do. But mostly what I consider fun is not going out and getting trashed. I'm not really worried and I don't really watch my back.

What's your ideal career trajectory? Whose career would you like to have?

Cate Blanchett has a beautiful career that's inspiring, and she's a beautiful woman. She's never pigeonholed as one specific thing. She can go from being a hot schoolteacher to playing a very intense role, as in "Babel." I think she's very versatile. I think Bette Davis was an incredible actress. And I look to her for a lot of inspiration, too.