Should Obama have picked Hillary?

Did the GOP just co-opt the Democrats' chance at making history? Sarah Palin, a conservative, antiabortion, pro-NRA Republican, may just be the first woman in the White House. 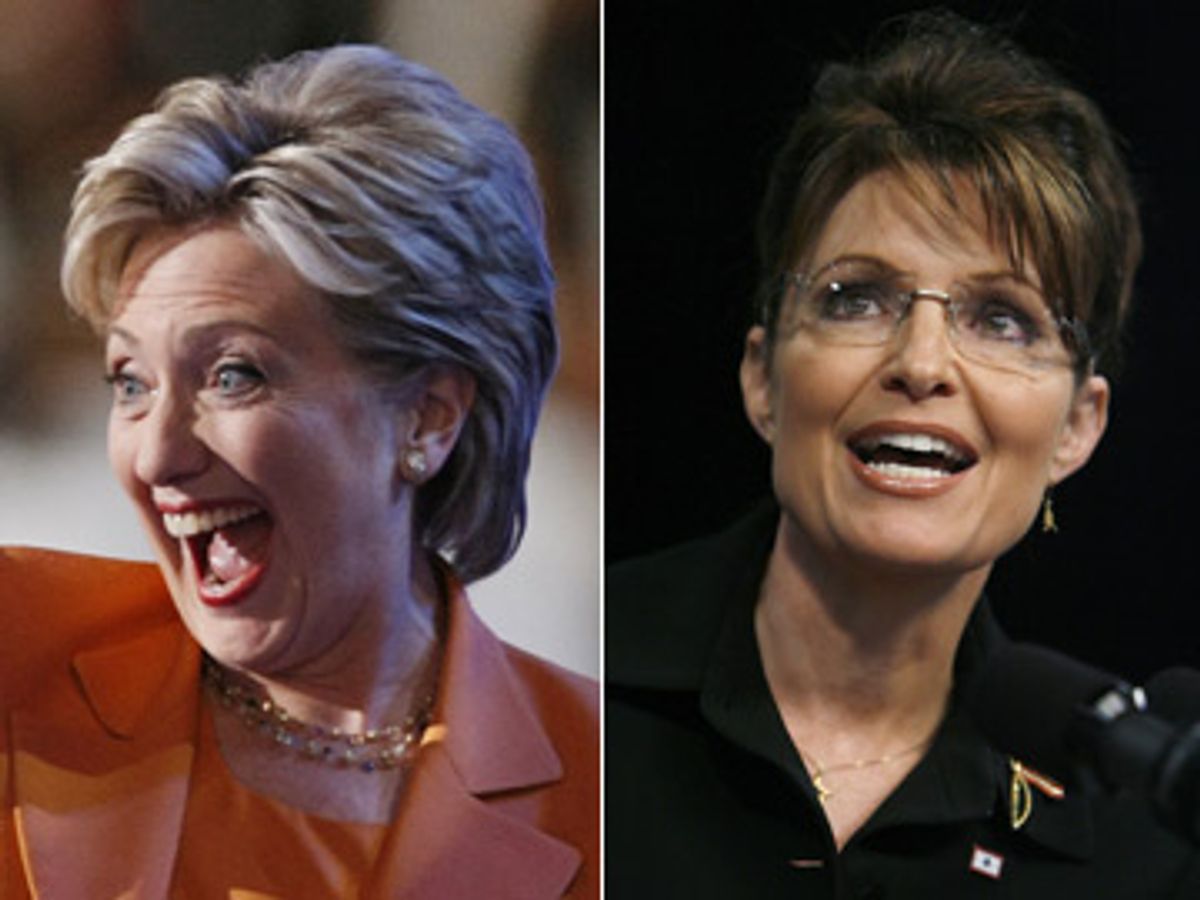 The first thing you may notice about Palin is that she is a woman, the first female governor of Alaska and, at 44, its youngest. This is big news on a presidential stage: It makes her only the second major-party woman vice-presidential candidate in American history, the first in GOP history, and presents this forehead-smacking reality: Come January 2009, this country will have either a black president or a female vice president.

Palin is a former sports reporter and housewife who became mayor of Wasilla, Alaska, in 1996, and was elected governor in 2006. She is the mother of five children (named Track, Bristol, Willow, Piper and Trig -- top that, Gwyneth Paltrow!), the oldest of whom will be deployed to Iraq on Sept. 11 (seriously) and the youngest of whom was born four months ago with Down syndrome. Palin's decision to continue her pregnancy, despite the fact that the illness was detected in prenatal genetic tests, will be a rallying point for the religious right.

Palin presents some stomach-churning possibilities for Democrats and for the Obama campaign, which has spent the past summer, and especially the past week, wrestling disillusioned women into line after the disappointment of Hillary Clinton's supercharged but failed presidential bid.

Of course, even a cursory glance at Palin's positions should be enough to warn Democratic women (and men) to stay far, far away. The governor's Web site states: "I am pro-life and I believe that marriage should only be between a man and a woman." Palin is a member of Feminists for Life, and said during her gubernatorial campaign that she is opposed to abortion even in cases of rape and incest. Palin is a lifelong member of the National Rifle Association, and when it comes to healthcare, she says, "I support flexibility in government regulations that allow competition in health care that is needed."

For the true Hillary holdouts, the handful of so-called PUMAs who spent this week jawing about how they were going to vote for John McCain, these antiwoman stances aren't likely to make a dent. These agitators will not consider that picking Palin, a politician with only a few years of experience, is a pandering and condescending sop toward them, one that suggests that by dint of her gender alone, Palin could stand in for Clinton, who spent years being fire-forged for her place in history.

Then again, after a week in which Clinton did everything short of standing on her head and humming the Battle Hymn of the Republic to get women fired up and ready to go for Obama, and in which Obama and Joe Biden did their part to provide some thrilling political theater for both sexes, nothing was going to shake these stalwarts, whom Rachel Maddow recently called "post-rational," from their self-immolating mission.

But even among more reasonable Democrats, the Palin pick does create worries for the still-tender party, not the least of which is that it will reopen a debate about whether Barack Obama should have picked a female vice president, or more specifically, Hillary Clinton.

Biden is a strong candidate for Democratic women, with a good record of supporting reproductive rights and opposing antichoice nominees to the Supreme Court. Biden also wrote the groundbreaking Violence Against Women Act, and is great on the lunch-bucket economic issues so vital to so many American women.

But there was pressure on Obama, especially after the energy (and votes) generated by Clinton's run, to consider as a running mate Clinton herself, or women like Kathleen Sebelius and Janet Napolitano. He reportedly did not formally vet Clinton, and none of his final top three candidates for the job were female.

The selection of Palin makes it easier to see what the advantages of putting a woman on the Democratic ticket might have been for Obama. McCain likely tapped Palin specifically to battle Obama's perceived woman problem, and her selection blunts the Obama camp's argument that McCain has entirely lost his maverick edge. It also keeps Obama's from being the only history-making candidacy in the voting booth, and allows those undecideds who might have been queasy about Obama's differences (i.e. race) to funnel guilt about their hesitation into a vote they can tell themselves is socially progressive, and even -- ugh -- feminist.

During her speech, Palin gave a shout-out to Geraldine Ferraro and cited Clinton's rallying cry about the 18 million voters who cracked the White House glass ceiling, chillingly promising to break it for her. It was hard not to consider that if elected, Palin will be one health emergency away from becoming our first female president, and to feel frustration at Democrats not only for letting this particular piece of history slip through their fingers but for allowing the work that Clinton and her supporters did to get co-opted by their Republican opponents. If the Palin selection brings female voters to the McCain camp, there is likely to be a round of second-guessing about whether Obama read the tea leaves wrong and missed an opportunity to shore up his divided party more effectively by going with, or at least seriously considering, Clinton.

Palin's spot on the ticket will also mean the diffusion of feminist energy. Those who monitor gender bias in popular culture and the media are still icing their heads after the exhausting season of Clinton-baiting by the press, and (too) slowly rousting themselves to take on the ugly treatment of Michelle Obama. Now there will also be Sarah Palin to consider, a candidate who represents none of what they believe in, but whose nomination is already highlighting the fact that the Clinton candidacy apparently taught the news media nothing.

Over at CNN, John Roberts on Friday morning was talking about how the major function of a vice president is "to go to funerals," when he changed his tune about exactly how taxing the position might be. Discussing Palin's infant, Roberts noted, "Children with Down syndrome require an awful lot of attention and the role of vice president, it seems to me, would take up an awful lot of her time. It raises the issue of how much time will she have to dedicate to her newborn child?"

Dana Bash responded only that while Roberts' was "a very good question," she assumed that the McCain camp would wonder whether "if it were a man being picked who also had a baby with Down syndrome, would you also ask the same question?" Bash did not note that moments before, Roberts had been describing the vice presidency as a purely ceremonial position, or point out that Palin has for some time been pulling off the feat of governing a state while lactating (not to mention gestating!).

Meanwhile, over at the supposedly progressive MSNBC, Andrea Mitchell was consumed with one key question: whether Palin would neuter big bad Joe Biden. Forgetting, apparently, that the Delaware senator didn't seem to be frozen with fear while debating Hillary Clinton for the Democratic nomination, Mitchell wondered about how Biden, known for his attack-dog debate style, "can be tough against a woman. Doesn't it give her a gender advantage?" This was clearly Mitchell's keenest insight into McCain's pick, since a few minutes later she repeated, "You can't be too tough on a woman in a debate, or can you?"

And then there's the fact that Palin is a very attractive woman, a Tina Fey look-alike who was a runner-up for Miss Alaska in 1984 and, who even before getting picked by McCain, had already been tagged online as a GILF (think MILF except for governors!). And the Wall Street Journal quickly put up a piece about her workout routine and diet. "My ideal fantasy is to be running on a hot dusty road just wearing running shorts and some kind of top that wicks away sweat," she tells the paper, as well as that "a skinny white-chocolate mocha is my staple in the morning."

Welcome to the 2008 presidential race, folks, where history gets made about as prettily as sausage.