McCain's Palin pick is the epitome of tokenism

Suddenly all anyone needs to qualify as a potential commander in chief is to be a religious ideologue with female gender characteristics? 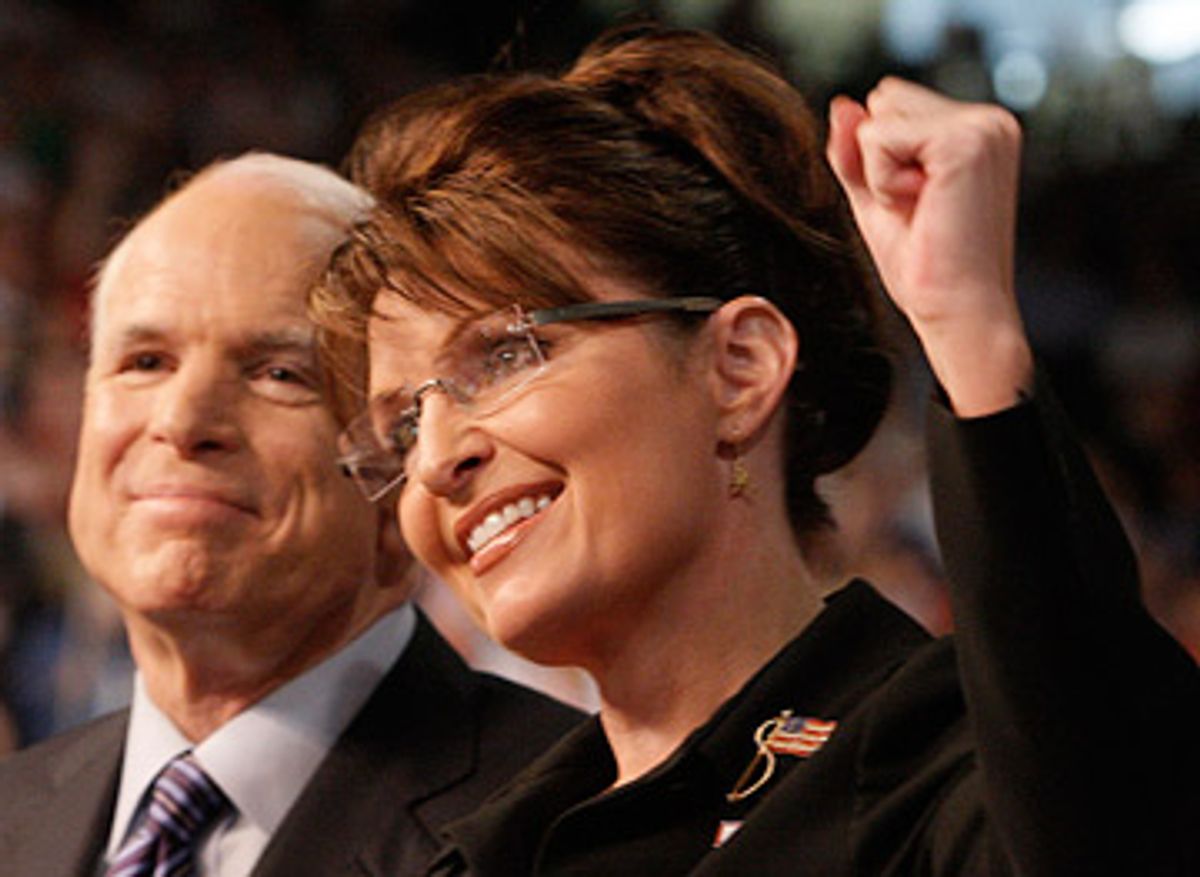 It is hard to think of a more cynical and contemptuous political act this year than John McCain's selection of Sarah Palin as his vice-presidential running mate. Having served as governor of Alaska for less than two years -- and as mayor of a small town before that -- her qualifications for national office are minimal.

Palin is the epitome of tokenism, exactly what conservative Republicans have always claimed to scorn, until today, as the politics of quotas and political correctness. Even Rush Limbaugh is a feminazi now (at least until Election Day).

But if Palin's résumé is limited, to put it politely, she possesses the only two qualities that McCain now seems to consider essential: She is a right-wing religious ideologue with female gender characteristics. Suddenly that is all anyone needs to qualify as a potential commander in chief of the world's most powerful military. We probably won't hear so much from now on about "experience" and "judgment," McCain's vaunted standard for the presidency until ... today. We certainly won't hear again about the "person most prepared to take my place," the phrase he has used more than once to describe his main criterion for a running mate.

When CNN political correspondent Dana Bash interviewed McCain last April, she mentioned his joke that one of the two main tasks of the vice president is to check on the president's health every day, a job of particular importance in his case. What did he mean by that? It was just a humorous remark, he said. But when she pressed him further, McCain said: "I think about whether that person who I select would be most prepared to take my place. And that would be the key criteria [sic]."

Sometime between then and now, a focus group must have told McCain and his handlers that the experience argument wasn't cutting against Barack Obama, that the nomination of Joe Biden as Obama's running mate had eviscerated it completely -- and that instead he and his consultants had better find a way to corral disgruntled Hillary Clinton supporters, or forget about winning come November.

Clearly nobody in the Republican camp is concerned that Palin would be clueless in a national security crisis, should a 72-year-old or older President McCain abruptly die or become disabled. Perhaps the GOP will have to mothball all those "Country First" banners along with the experience meme, because no candidate who puts the security of the nation above politics would ever contemplate this maneuver.

Even as a political tactic, choosing Palin may well backfire. Presumably the same Clinton voters who were willing to vote for McCain mostly to vote against Obama -- despite the Arizona senator's right-wing record on reproductive rights and pay equity -- will be pleased by the choice of Palin. But by definition those voters were already attracted to the Republican side. The calculation is that millions of undecided Hillary backers will cross partisan lines because a woman is on McCain's ticket. But will they believe that Palin is comparable to Clinton just because both happen to be female? Or will they regard that comparison as an insult to their heroine?

The Palin nomination will be celebrated as a measure of social progress by optimists like my friend Joan Walsh. At the very least, let us hope that the Republicans will no longer complain so bitterly about affirmative action, since they have taken that policy to its absurd conclusion in what may be the most fateful decision of this campaign.

Back when the first woman was nominated by a major party to be vice president, conservatives didn't react quite so positively as today. In August 1984, an editorial in the National Review mocked Democrats for choosing Geraldine Ferraro to run with former Vice President Walter Mondale. "The Democrats will attempt to project the issue as 'whether a woman can be Vice President,' a point the Republicans can cheerfully concede, returning to the question of whether this woman in particular should be the Vice-President ... Mrs. Ferraro is manifestly an affirmative-action nominee. She has been in the House only since 1979 and cannot be said, on the record, to be as qualified to be President, if necessary, as, say John Glenn, Fritz Hollings, Mo Udall, or -- George Bush."

Looking back on the Ferraro nomination, another well-known conservative wrote: "I believe that someday we are going to have a woman president, possibly during my life, and I've often thought the best way to pave the way for this was to first nominate and elect a woman as vice-president. But I think Mondale made a serious mistake when he picked Geraldine Ferraro as his running mate. In my view, he guessed wrong in deciding to take a congresswoman that almost nobody had ever heard of and try to put her in line for the presidency ... I don't know who among the Democrats might have been a better choice, but it was obvious Mondale picked Geraldine Ferraro simply because he believed there was a 'gender gap' where I was concerned and she was a woman."

Those are the words of Ronald Reagan in his 1991 memoir, "An American Life," pouring scorn on the nomination of a woman who had served six years in Congress working on foreign policy issues. In retrospect, he had a point. Only this Palin gambit could make the Ferraro mistake look responsible and wise.