The dark history of burned flesh

Drop those spareribs, imperialist pig-eaters! A new book argues that the great American barbecue smolders on the coals of genocidal racism. 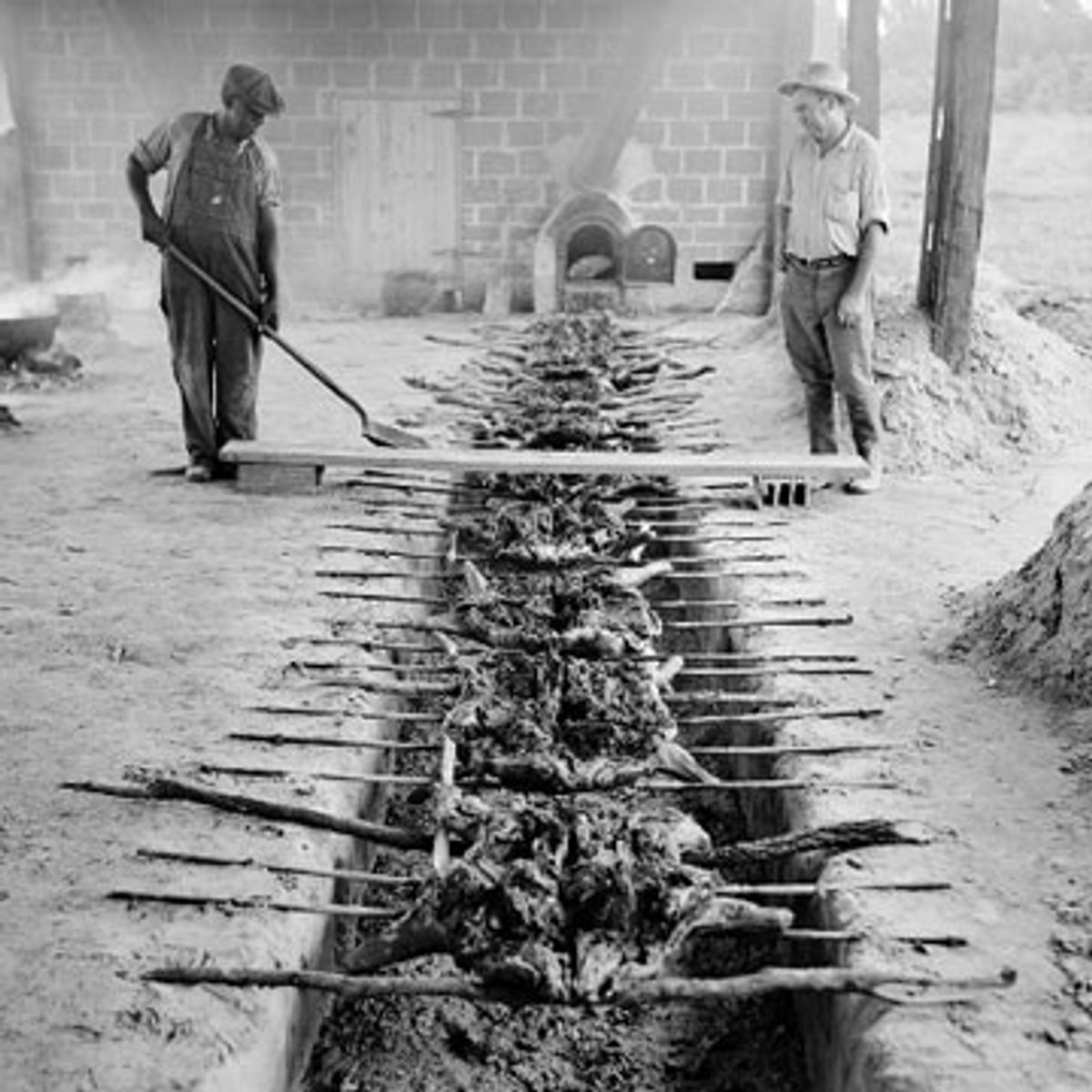 A good barbecue, as I see it, should begin with a trip to Home Depot to buy 6-foot lengths of rebar. When suspending an entire butterflied lamb over an oak fire for many hours, while basting it with stalks of rosemary dripping with lemon juice and red wine, the rebar comes in handy for spread-eagling purposes. Just insert the rebar through diagonally opposed leg joints, and your crucified lamb is easily maneuverable.

I performed this ritual (or rather, I should say, a cabal of carefully recruited barbecuing partners in grill did, while I was busy tending baby back ribs in a honey-mustard glaze in my smoker and shucking lightly roasted oysters over the grill) in my backyard a month ago for a couple hundred of my closest friends. The lamb, suspended over a gaping, smoking pit, with the ends of the rebar resting on cinder blocks, exerted an irresistible seductive force over my guests. Some gathered around just to watch, to commune with the ancient splendor of meat and smoke and fire. Some ventured further and volunteered their efforts tending the coals -- smoking a lamb over a wood fire for five or six hours is a tedious business: Labor is required. Some basted and, finally, some carved. Everyone ate.

All in all, it made for a kick-ass party. But after reading Andrew Warnes' "Savage Barbecue: Race, Culture, and the Invention of America's First Food," I suspect more was going on, beneath the smoke cookery, than I cared to acknowledge.

To this day, writes Warnes, a lecturer in American literature and culture at Leeds University, barbecue "has yet to escape the fraught implications of savagery and cannibalism inbuilt and original to its name." Barbecue's early popularization in 18th century London was "wedded to the ascent of new notions of racial exoticism and mastery." In one of the earliest English-language descriptions of this imported cuisine, Ned Ward's "The Barbacue Feast," published in 1707, "the whipping of slaves goes hand in hand," theorizes Warnes, "with the savage barbecuing of meat. Both belong to the production of a new imperial supremacy that can corrupt those it empowers."

Best of all, or most absurd of all, there is Warnes' rumination on what it must have been like to participate in one of President Andrew Jackson's famous Election Day barbecues:

And perhaps these mountains of meat in turn connoted a power over violence in a way no other food could. Perhaps prospective politicians kept planning this particular event because, even as it offered opportunities to display public generosity, it declared to all in town that they were men -- warriors even. Slowly rotting in the summer sun, the piles of pig would have announced a kind of power, a mastery over rather than servitude to death. War veterans, after a drink or two, could comment on the meat, contemplating its resemblance to the roasted and dismembered Native corpses they had seen.

"Savage Barbecue" is either the most ridiculous book ever written about America's defining "grass-roots" food, or it is the most profound. Or perhaps it is both. As someone who takes his barbecue very, very seriously, and who is equally unafraid of fire and raw flesh (not to mention writers like Warnes, who tackle their subjects with a clutch of poststructuralist deconstructionists cheering them on and the likes of Edward Said nodding in sage approval), I found myself both riveted and appalled by Warnes' investigation of barbecue. Was I cultivating a heart of darkness in my own backyard? Or did I, like so many Americans, just like to hang outside by the fire and rend some exquisitely prepared meat with my teeth?

The story begins and ends with the name. As legend, and the Oxford English Dictionary, would have it, the word "barbecue" is derived from "barbacoa," a word supposedly used by indigenous Haitians to refer to a "framework of sticks set upon posts" upon which the Native Americans placed their meat, for purposes of slow smoking. Barbecue may have even played a part in the earliest initial encounters between Europe and the New World. Columbus' sailors are reported to have been horrified at the sight of slowly smoked whole iguanas hoisted above the beaches of what later became dubbed Hispaniola.

Etymologically speaking, therefore, it is only a coincidence that "barbecue" shares some syllables with "barbarian" (derived from the Greek word denoting "those who don't speak Greek"). But for Warnes, there are no coincidences. Assonance is no accident! Europeans invested the connotations of barbarism in the indigenous word barbacoa, and, voilà, barbecue came to signify not just smoke cookery but also the savagery of the New World, as opposed to the civilization of the Old.

Warnes gives a clue to his overall approach when he observes that "the editors of dictionaries and encyclopedias would perhaps view the inferential character of this argument with some suspicion."

Well, yes. Proper historians, anthropologists, etymologists and probably most lovers of barbecue would likely run screaming from Warnes' text, horrified at the liberties he takes while pursuing his argument. Too many sentences begin with the words "conceivably" or include constructions such as "it is not hard to imagine ..." Too often, Warnes makes leaps of faith, for which there is, strictly speaking, no hard evidence. One example, Thomas Jefferson's inexcusable failure to so much as mention the practice of barbecue in "Notes on the State of Virginia" (or, egad, in any of his writings) is transformed into proof that he was "aloof and loath to experience barbecues firsthand."

But let's give Warnes credit for being forthright about all this, before we string him up over coals of his own making. In the preface he notes:

As a tradition that dislikes its own cultural status, a tradition that wants everywhere to establish itself at a grassroots and instinctual level, barbecue cannot be approached head-on. It will only give up its historical secrets if we are prepared to read adventurously, and between the lines of the colonial and Republican archives.

And adventuring we go, from some of the earliest accounts of European visitations to the Americas, to the works of the likes of playwright Aphra Ben and Ned Ward (whose other classics include two books that have jumped to the top of my must-read list, "Sot's Paradise" and "Delights of the Bottle"), to Cotton Mather and Thomas Jefferson and Zora Neale Hurston and Andrew Jackson. Perhaps it would be best to think of Warnes' approach in the way one appreciates a risk-taking jazz soloist. Sometimes the improvising works; sometimes, not so much.

The thesis is provocative: Europeans embraced a barbecue mythology because it allowed them to "present the cultures" of the New World "as the barbaric antithesis of European achievement." So barbecue, at its core, throbs with racism.

But before considering the contradictions inherent within Southern pit barbecue, cherished by both black and white, and indeed, during the Jim Crow era, one of the few social arenas in which black and white could mix, I must concede that even though I bridled at some of Warnes' more histrionic formulations, like his revels in "the satanic poetics of American savagery," I found myself acknowledging that there is definitely something foul lurking behind the delectable fumes of rendering pig fat.

One has only to look at a photograph of the stunning copper engraving "A Tupinamban Cannibal Feast" by Theodor De Bry from 1592 to understand that, right from the earliest times, barbecue did connote unspeakable savagery to many Europeans. There is virtually no historical evidence that Native Americans were fond of cutting up their fellow humans into manageable pieces and throwing them on the barbacoa, but it is clear from multiple early accounts that Europeans believed that they did, or wanted to believe they did. And there is a fascinating, as yet not well understood, story to be learned about how indigenous smoke cookery intersected with the traditions and cultural practices of imported African slave labor (and imported pigs). What resulted was uniquely American, and profoundly entangled in the economics of slavery and the violence wrought upon the original inhabitants of the Americas.

Because in the South, at least, it's clear that slaves did most of the work. Smoking an entire beast is a time-consuming, labor-intensive project. Slaves dug the pits, tended the coals, basted the meat. This most American of foods is precisely so American because Europeans adopted the cooking technology from the Indians they exterminated while giving the job of chef to the slaves they brought from Africa.

Does this explain Southern pit barbecue's rejection of the "effete" -- its conscious adoption of low-rent plastic cutlery and paper napkins as markers of an explicit disavowal of more "civilized" cuisine? Can we then stomach Warnes' assertion that "to take pit barbecue joints at face value, to accept that where they begin culinary standards end, is to see this culture not as it is but as it wants to be seen: subaltern, rebellious, wild, barbaric."

I don't know. As I read "Savage Barbecue" I found myself scribbling in the margins: "ridiculous," "kooky," "he's making this up as he goes along!" and then, on the next page, being forced to confront just how much of the early history of my country is inextricable from abhorrent acts of racism -- the wholesale forced migrations and annihilations of peoples -- and to admit that barbecue does, indeed, fit intimately into that narrative.

The "true barbarians," concludes Warnes, are not the half-naked Native Americans slow-smoking their iguanas or salmon on raised platforms above a bed of coals, but those "who wash their hands of the violence they have sent out into the world." That could, I suppose, include my guests and I, as we pledged obeisance to the smoking lamb and gnawed on our baby backs, dabbling in a cuisine forged out of genocide and slavery.

That's one way to look at it. Another would be to cherish how even out of such savagery, a hybrid mestizo cuisine was born, an edible jazz, that ultimately belongs to us all. And tastes real good.