Locals are jazzed by the swift emergency response to Hurricane Gustav. But doubts about post-Katrina repairs to the flood-control system have the city shaking. 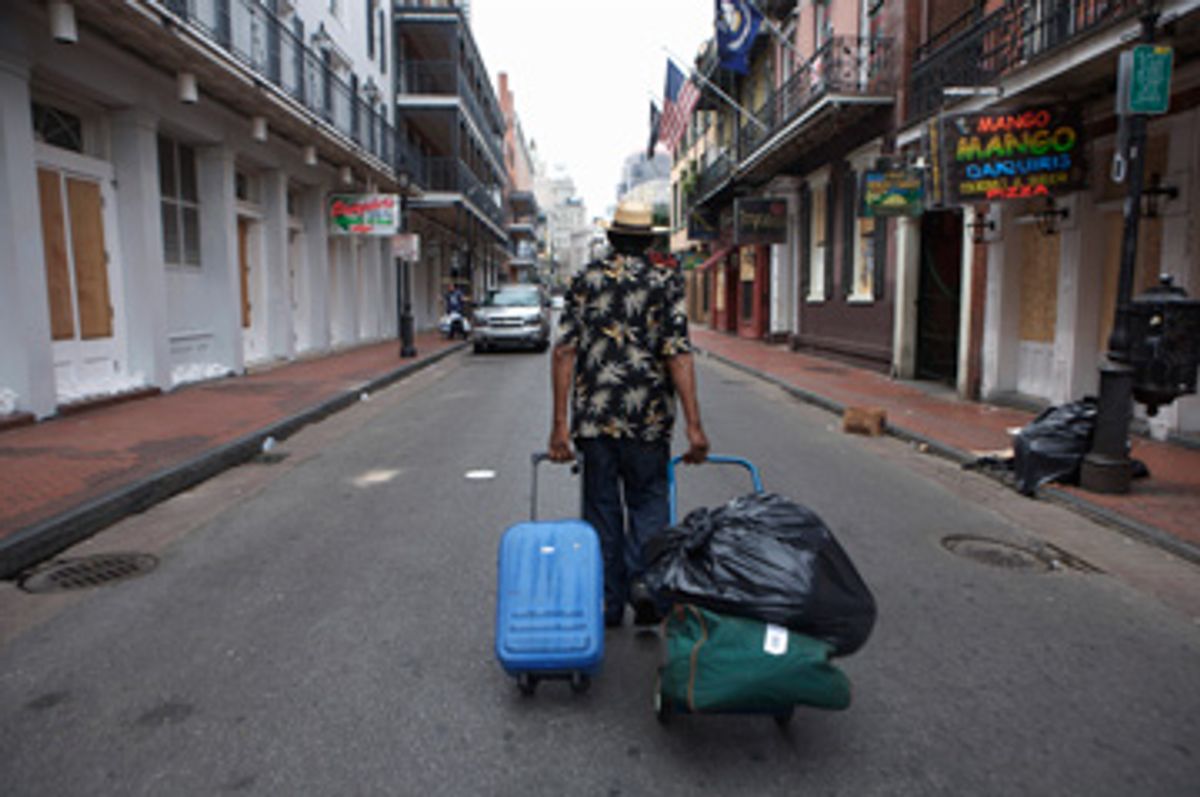 On Monday morning, when Hurricane Gustav hits the Gulf Coast, all of what New Orleans was not able to repair post-Katrina will be thrown into relief. Businesses have reopened, neighborhoods have come back, and the city's reputation has been restored since Katrina, at tremendous personal expense to the people who live here. But the elephant in the living room, the federally engineered flood-protection system, must perform in the face of a probable Category 3 storm on Monday afternoon. If it doesn't, many of New Orleans' painstaking repairs may have been futile.

Gustav is expected to be comparable in strength to Katrina, which was also a Category 3 hurricane. However, Katrina, which breached levees and flooded low-lying areas like Lakeview, Gentilly and the Lower 9th Ward, made landfall east of New Orleans. Gustav is on track to hit west of the city, and those eastside levees that are still not fully repaired may not have to bear the brunt of the storm surge. In 2008, the levees on the west bank of the Mississippi River are more threatened.

This time, at least, city and state officials have done an excellent job of getting everyone out. President Bush may be headed to Texas, and Republican presidential candidate John McCain may have had his picture taken with Mississippi Gov. Haley Barbour, but in Louisiana, the state where the storm will actually come ashore, local officials are responsible for coordinating the evacuation. The news media aided in the evacuation by trumpeting Gustav's approach early and often, and New Orleanians listened. By Tuesday, TV journalists began their mantra of "evacuate as soon as possible." Many residents who had stayed for Katrina and suffered decided to heed the advice. By Wednesday, a ticker ran at the bottom of all local news broadcasts with phone numbers to call and procedures to follow for people who wanted to leave but who had no car. The city's never-before-tested hurricane protocols were rolling into action. By Thursday, lines were beginning to form at gas stations.

On Friday, the third anniversary of Hurricane Katrina's Louisiana landfall, public transit buses were commandeered to serve as shuttles to the city's Greyhound bus station, ferrying citizens without cars to the buses that would take them to shelters as far away as Tennessee. Many evacuees who were upbeat getting on their shuttle to the bus station -- a successful and smooth process by most accounts -- became despondent while waiting in line to get on a bus to an unknown location. "I just wish we knew where we were going," said Anthony Jones, 16, who sat on the curb with a group of friends. When asked to comment for the article, Alethia Smith, 18, smiled sarcastically. "Just tell them we poor, but we happy."

Barbara Shields, 68, was waiting in a section of the bus station designated for people with disabilities, all of whom would be sent to a specific shelter. "My grandson called me this morning," she said. "He told me, 'Grandma, don't let them people take you! They'll take you anywhere!' And I said, 'Baby, my legs may be bad, but my brain ain't bad.'"

By Saturday, the Louisiana National Guard was fanning out through the city on patrols and the majority of those who were relying on buses were in the process of leaving. The Orleans Parish Prison had been evacuated, as had most hospitals and nursing homes. Anytime a microphone was in front of them, city officials praised the efficiency of all of the evacuation efforts under way. Aid agencies were in top form. Unfortunately, no one could say the same for the city's levee system. The Army Corps of Engineers has been rebuilding the city's levees for three years but cannot guarantee their effectiveness beyond a Category 3 hurricane, and even then a large storm surge could easily overwhelm them.

Back at the Greyhound station, empty pet kennels were stacked up next to a large pet-registration area. The Louisiana SPCA was overseeing a tightly organized pet evacuation, loading crated animals onto refrigerated semis to be taken to Shreveport, La., where their owners could collect them. The mood around the pet evacuation area was, not surprisingly, all about compassion and gentleness -- somewhat in contrast to vibe at the large-scale human evacuation going on farther down the sidewalk.

Volunteers had driven down to New Orleans from all over the country to help move out the pets. Their actions could well prove beneficial to people: Three years ago, it turned out that many of people who did not evacuate for Katrina stayed behind because they couldn't bear to leave their animals. A pet-evacuation procedure was considered crucial to post-Katrina preparedness.

But the benefits for the human population of New Orleans didn't seem to be the driving force for at least one of the ASPCA volunteers. When asked how she would respond to the observation that they were doing a better job with the pets than with the humans, a volunteer from St. Louis choked up. I paused, worried I had said something insensitive about the evacuees or about her motives. But I had misunderstood her. "What you have to understand," she said, composing herself, "is that there is no difference between companion animals and people."

By Sunday morning, 24 hours before Gustav's expected landfall, New Orleans had largely emptied. There appeared to be a roughly 1-to-1 ratio of citizens to law enforcement in the city. Checkpoints were being set up at major intersections, and entire sections of the city were more or less blocked off to through-traffic. While trying to get our press credentials, we were stopped by some National Guardsmen.

Not everything about the response to this storm is different, however. New Orleanians are cynical about government. Gustav is not necessarily being overhyped, given how horrible Katrina was and how vulnerable the city remains, but there is suspicion about the motives of the responsive, attentive local officials. Hurricane Katrina's aftermath reflected horribly on the federal and local governments, and politicians cannot afford to repeat that. The mandatory evacuation protocols for Gustav have been thorough and swift-moving, whereas the protocols for Katrina seemed improvised and last-minute. Residents wonder whether by being vigilant -- or hysterical, depending on one's perspective -- officials are putting themselves in a position to be able to say "I told you so" if anyone stays behind. This time around, Mayor Nagin and all disaster-response spokespeople are making it clear that if you stay behind and are stranded on your roof waving a flag made from a bedsheet, it is you who will be held accountable, not them. Many who are riding out the storm feel that's the motive behind Nagin's emphatic plea during a press conference Saturday for citizens to flee "the mother of all storms," and "get their butts out of New Orleans."

Nagin is famous in New Orleans for his catchy sound bites, and this is only the latest in a series that began during Katrina's aftermath, when he really found his voice by telling the feds to "get off their asses" in a live radio interview. Although New Orleanians loved Nagin for that comment, many were wary of Saturday's hysterical press conference appearance. People having their final pre-storm restaurant dinner in the French Quarter were heard murmuring about the government "coverin' their asses." This time around the city may have acted with the utmost caution and thoroughness in its coordination of agencies and resources. But it might be generations before New Orleanians let go of the grudge they hold against the government -- city, state, and federal -- for its failure to protect against and respond to Katrina.

"The city learned a lot of lessons three years ago, not just humanitarian-wise, but image-wise," said Mary Beth Romig, of the New Orleans Convention and Visitors Bureau. One of the image lessons was that stranding tourists inside moldering, sweltering hotels is bad for business in the long term. So all the hotels asked all their guests to leave, then locked their doors.

This is not good news for the swarm of media that have shown up for the show, many of whom have no place to stay in the city. Some journalists are bunking down inside TV trucks parked along the Canal Street streetcar line.

Whereas hurricane parties raged until Katrina's winds began felling tree limbs, most bars are boarded up. Previous storm threats have prompted New Orleanians to spray paint taunts on their boarded-up windows: "We don't run from hurricanes, we drink them!" Or "No hurricane can hold us down!" This time around, those sentiments are muted.

Everywhere, that is, except a two-block stretch of Bourbon Street, where the remains of the canceled Southern Decadence festival, an annual gay bash held in the French Quarter, was in full swing. Decadence, scheduled for this weekend, was officially canceled, but revelers had flown in from all of the country, and they were partying with fierce determination. At the Lafitte in Exile bar, the dance floor was packed, and a Tina Turner concert video was being projected on the building across the street. There was a line out the door at the Clover Grill, and a man in a cowboy hat led a pair of miniature ponies around in the street.

A New Yorker named Mike told us that most attendees were flying out Sunday, but the element of anxiety lent an exciting urgency to the party. "My friends in New York are freaking out, like, 'When are you coming home?' And I'm like, 'I'm not coming home yet! Hurricane sex is the best!'"

Some locals, meanwhile, seemed committed to upholding an ancient, pre-Katrina New Orleans tradition: remaining blasé in the face of an incoming hurricane. On Magazine Street in the Uptown neighborhood, an area that did not flood during Katrina, a few tattooed hipsters were sitting on their front porch, smoking cigarettes and listening to the grimly familiar silence of an empty city. The silence was broken by a police cruiser that rolls by with a bullhorn aimed out the window. "Mandatory evacuation! Y'all gotta get out!"

The hipsters shrugged their shoulders, and the cruiser moved on.