A milder than predicted Gustav spares the city, but the region's hurricane response remains in tatters. 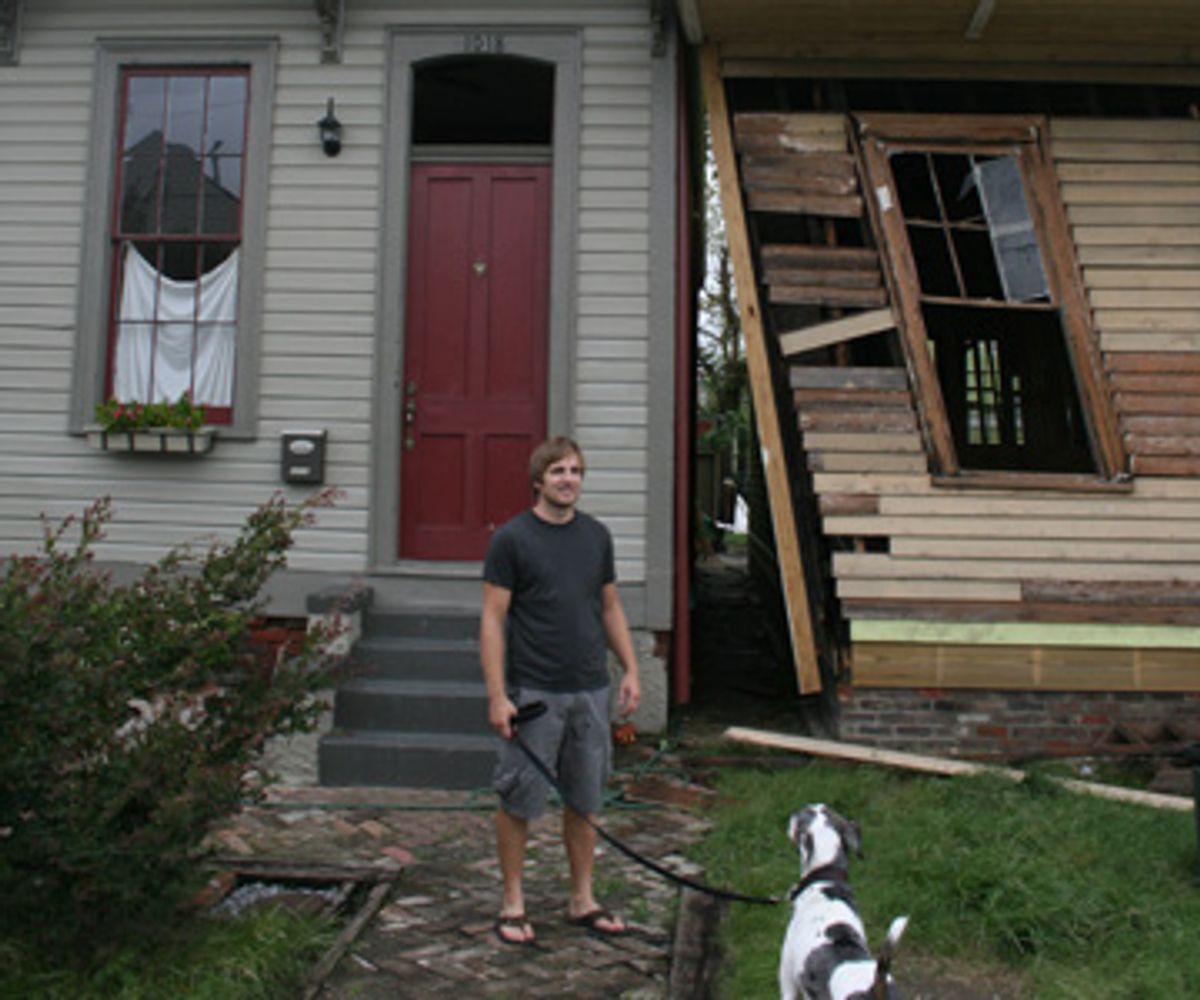 It is just after 2 p.m. central time, and some of the handful of residents who rode out the storm in Uptown New Orleans have begun venturing out. In the wake of Gustav's hot winds, most people are relieved. But even in Uptown, which was spared much damage during Katrina, there are some houses with torn roofs, and wind-strewn debris lines the streets.

Tim Lefevre, a fireman patrolling the streets for damage, said, "You can't believe everything you hear about this one. Everybody's out walking their dogs already. It's just wind damage mostly."

When it made landfall in South Central Louisiana at 11:15 Monday morning, hurricane Gustav was a weak Category 2 storm, with winds reaching a top speed of 115 mph, and as it moved inland it rapidly lost strength. In New Orleans, winds barely reached 60 miles per hour. The storm surge, although large in some areas of the storm's path, was moderate in the city. Water leaked over the tops of the levee in New Orleans' Ninth Ward, but it was not enough to cause any real flooding. Even the rains, which were thought to have flooding potential, were relatively mild.

Robert Bandzuch is standing outside his house in Uptown, which he rebuilt himself after Katrina. His neighbor's unfinished two-story house partially collapsed and leans precariously into his one-story shotgun, which must bear the additional weight. He is worried about his house flattening him while he's sleeping tonight. Regardless, he's unlikely to leave New Orleans in the case of a future hurricane just because officials declare a mandatory evacuation. "Because of his personality, the mayor said things that weren't true," said Bandzuch. "That's not a good way to get people to pay attention."

Bandzuch, 33, a Slovakian woodworker, along with his Catahoula breed dog, Lasky, walked the streets together examining the downed limbs and power lines littering Magazine Street.

In the post-Gustav news conferences, there will be handshakes and good cheer about a planning and evacuation job well done. Republican presidential candidate John McCain is no doubt relieved that he can now make a presidential-sounding statement of satisfaction about the proceedings, and maybe rub away some of the stink of the Bush administration's legacy of failure during Katrina.

But self-congratulation doesn't address the real wounds left over from the neglect of the city during Hurricane Katrina. As the estimated 90 percent of the city's residents who evacuated this storm return over the next couple of days, big questions about the city's relationship to natural disasters remain.

Because of Katrina, many New Orleanians distrust and resent the government, yet they remain completely dependent on government for help. A myth persists among a small group of New Orleanians that some nebulous group of actors in "the government" purposely dynamited the Lower Ninth Ward levees that failed during the Katrina storm surge.

So now that this time around the government managed to coordinate a successful response and evacuation, what will the effect be? There are two likely options.

One, the more rosy scenario, is that this process will become embedded in people's idea of what it is to live here. Every year, we evacuate. We take care of our friends and neighbors, have established relationships with people or church groups in the region where we can stay, and this is what we will continue to do. This scenario will require New Orleanians to forge a new relationship with their elected officials. Rather than seeing them as cynical profiteers, they will understand the leading role government plays in a natural disaster scenario.

Two, the more cynical scenario, is that politicians engage in a big group hug about how great a job they did, how we dodged a bullet. That will remain the extent of lessons learned. New Orleanians won't be challenged to make this kind of exercise a part of their life; they will be encouraged to go back to business as usual. And next time around, it will take another display of either bumbling incompetence or hysterical pleading to get people to get out of harm's way.

Meanwhile, the real underlying challenge for New Orleans remains obscured: The behavior of hurricanes is almost impossible to predict. Virtually everything forecasted about Hurricane Gustav was inaccurate, with the exception of its projected path. As Gustav approached, the attention of TV watchers was yanked from the Republican convention in Minnesota to the Gulf Coast. We watched dueling headlines: There won't be storm surge flooding, declared the Army Corps of Engineers. Yes there will, said FEMA.

Rather than create a sustainable culture of natural disaster preparedness, city officials choose to browbeat residents into leaving. The result is a pendulum swing between fear and nonchalance. "People here had a change of mind-thought after Katrina," said Sgt. Maj. Edward Daigle of the Louisiana National Guard, as he kept watch over the streams of evacuees leaving New Orleans' Greyhound bus station on Saturday. "They used to feel that they could handle anything, but now they know they've got to leave."

Until next time, that is, when people will remember how Mayor Nagin cried wolf and they spent two nights on the floors of high school gyms across the South when they could have been at home, nervous but comfortable. Jack Olson, an Uptown resident out for a stroll as the winds died down, said, "I can't watch TV because it's all a bunch of doom and gloom and paranoia that I don't care much for."

This isn't the only place where storms are a fact of life, where the sea is trying to reclaim the dry land. Many areas from Cuba to Indonesia regard storms as a challenge that must be continuously met. The question is, can politicians in this country be counted on to react to major storms responsibly, and not just use them for their own political expediency? The city dodged disaster this time, but if New Orleans is to survive, it must reenvision itself, from the "the city that care forgot" to the city that cares for its own.