Eye of the storm

As Gustav approached, New Orleans hospital workers swore they wouldn't repeat the mistakes of Katrina -- and they were right. 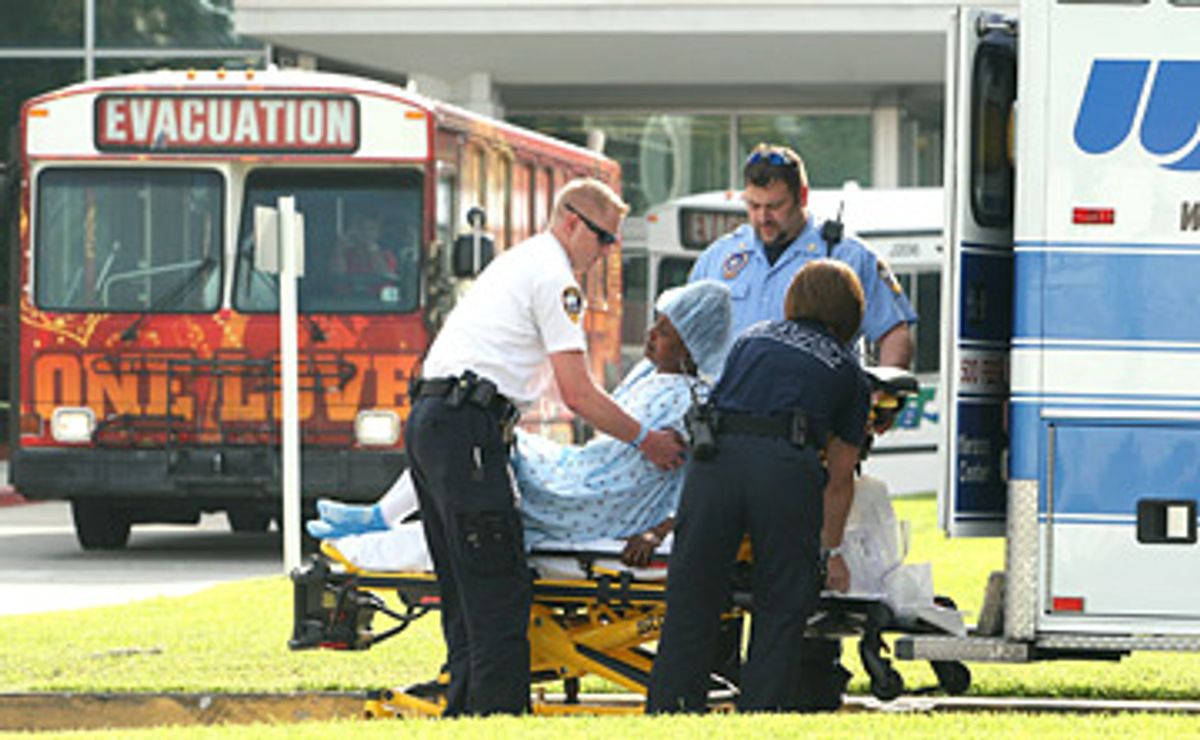 When residents of New Orleans began drowning three years ago, the city's director of Emergency Medical Services, Jullette Saussy, faced a devastating crisis. Radios failed. Ambulances were trapped. She needed boats and high-water vehicles to respond to the increasingly frantic 911 calls from people threatened by the rising waters.

Saussy and other city, state and federal officials vowed the next time would be different. So as Hurricane Gustav bore down on New Orleans this weekend, I went with Saussy to the New Orleans Union Passenger Terminal, the city’s designated evacuation point, to get a firsthand look at how much progress had been made.

At 9 p.m. on Saturday, two hours after Gustav's first squall drenched New Orleans, she and other first responders had already spent days helping the city brace for a long, ugly fight with the storm.

The city's mandatory evacuation program had ended hours earlier, but Saussy was receiving reports that several dozen of the city's sick and elderly were still stranded in their homes. They and their families were calling 911, insisting they had registered for the city's special-needs transport program, but that help had never arrived. The program was officially over, but Saussy and her EMS teams pledged to keep it going.

"We're not going to leave people," she said. "We've seen what it looks like when people drown."

Ambulances picked up those residents and took them to New Orleans Union Passenger Terminal, the city's designated evacuation point. "We got a lot more coming," Saussy told an emergency medical technician there.

Of all the ghosts of Katrina, perhaps the most haunting was the specter of vulnerable residents suffering and dying at home and in hospitals and nursing homes before help arrived. Hospitals became furnaces as they lost power in the summer heat, surrounded by water and cut off from communications. Few times in American civilian history have health workers faced such horrific conditions and wrenching choices over whom to save first when rescue boats and helicopters were slow to arrive.

Hospital administrators swore their facilities would be better prepared for the next storm. Among them was Robert Lynch, CEO of Tulane University Hospital.

Hours before Gustav's predicted arrival, I watched Lynch, dressed down in khakis and a Tulane shirt, give a pep talk to a roomful of grave-looking nurses and support staff. "I can't tell you how much I appreciate your effort to be here," he told them.

Some of them, including Lynch, had watched three years ago when Lake Pontchartrain flooded the hospital's generator, knocking out all the facility's power. For days, staff labored in extreme heat until all the 1,600 people who had sheltered at the hospital were flown by helicopter off the top floor of its parking garage. Bed-bound patients were carried down staircases on mattresses.

This time, as the storm threatened, hospital officials discharged patients who were capable of going home and told staff to find other accommodations for their own family members and pets. That left only about 430 people to be evacuated from the main campus if the levees failed again. The Lakeside campus was down to just a few high-risk pregnant mothers and babies. Generators at the main campus had been raised high above the ground, and a larger fuel tank installed, along with flood gates and pumps.

And there was another difference. Many of the hospital's critically ill patients and those who rely on electricity-powered technology, such as dialysis machines, were being evacuated to other cities that officials expected would be safer. Doctors used medical judgment when choosing whom to evacuate. The bottom line, Lynch said, was this: "Who would you pick if you had the choice of moving someone now -- planned, controlled, with very good medical assets like a mobile ICU, versus going out like Katrina?"

Across southern Louisiana, doctors at other hospitals made similar choices about whom to evacuate. But even well-laid plans hit hitches. As Gustav's predicted landfall grew closer, New Orleans Mayor Ray Nagin called it "the mother of all storms." Hospitals decided at the last minute to evacuate even more patients.

Cindy Davidson, an administrator with the Metropolitan Hospital Council of New Orleans, helped coordinate an aerial evacuation using local, state and federal assets. On Sunday, 231 patients were on her list, many of them critically ill. Ambulances from as far away as Pennsylvania were ready at 6 a.m. to begin shuttling ICU patients to New Orleans Lakefront Airport. Then they waited. And waited. "It took a long time for the planes to actually come in," Davidson said.

When the air evacuation teams arrived, many weren't prepared to transport the most critically ill. "They kept asking, 'Don't you have some ambulatory patients?'" Davidson said. In the end, many of the sickest patients had to be transported by ground. At least three patients died awaiting evacuation at area airports, according to remarks by Louisiana Gov. Bobby Jindal. It was impossible to know whether the wait contributed to their outcomes. Davidson said that although careful plans had been established in recent years to evacuate individual regions of the state, "we never planned to evacuate the whole southern coast of Louisiana."

Still, while the process was far from smooth, the accomplishment was considerable. "We got everyone out on our list and plus some," she said.

Just after 10 p.m. on Sunday, EMS director Saussy was still at the Union Passenger Terminal in downtown New Orleans, struggling to get the city's last special-needs residents out of town. It was raining again when an ambulance pulled up with an elderly couple. Other ambulances with more elderly and sick residents were on their way, and about two dozen relatively healthy people still waited inside the terminal.

Two U.S. Army National Guard officers warned Saussy that for safety reasons the evacuation vehicles needed to be on the road by 10:30 p.m. Just then, two empty yellow school buses drove up to the terminal.

"Hallelujah, hallelujah," said Saussy, who had eaten almost nothing that day and had only two hours' sleep that night. Passengers were guided to the buses as the wind picked up and rain began falling harder. Then the buses and several ambulances pulled out, heading toward Baton Rouge and presumed safety.

Saussy walked through the rain to her car and drove back to the emergency operations center at City Hall, where she hunkered down for the night with colleagues from FEMA and the National Guard, as well as state and city officials. Several asked how her night had gone. "We got everyone out," she said again and again.

Hours later, Gustav's eye hit the Louisiana coastline. Its winds whistled eerily through cities that had been battered so recently, pulling down young trees, street signs and traffic lights. It knocked out power in Baton Rouge, hit the town of Houma and took out a levee in Plaquemines Parish.

On Monday night, Davidson began hearing that hospitals in other parts of the state were on backup power, perhaps some of the same hospitals that had taken in the patients she had worked so hard to evacuate from New Orleans. "They're going to have fuel issues in a day or two," she said.

Tulane University Hospital's Lakeside campus had lost electricity six hours after coming off the city grid, despite having three forms of backup power. The hospital had only a few patients by then, but one was a baby on a ventilator. Lynch oversaw the baby's safe evacuation to the main campus. Things were functioning so smoothly there that a group of key maintenance workers had time to gather by a window overlooking the street, chatting and watching the hurricane shake tree branches.

Late Monday night, Lynch got a call from Louisiana Secretary of Health and Hospitals Alan Levine, warning of a new and unexpected medical crisis. Much of Baton Rouge, where many New Orleans patients had been transferred before the storm, was without power.

By this morning state officials were warning that more than 800 sick people might need to be moved from the affected hospitals. Could Tulane accept some of them?

Yes, Lynch said, this time it could.

Dr. Sheri Fink is a reporter for ProPublica whose articles have appeared in such publications as the New York Times, Discover and Scientific American. Since 2004 she has been a frequent contributor to the public radio newsmagazine "The World," covering the global HIV/AIDS pandemic and international aid in development, conflict and disaster settings. Her book "War Hospital: A True Story of Surgery and Survival" won the American Medical Writer's Association special book award and was a finalist for the Overseas Press Club and PEN Martha Albrand awards.