Simply saying the word "change" a lot isn't enough. What did McCain offer people that was really new? 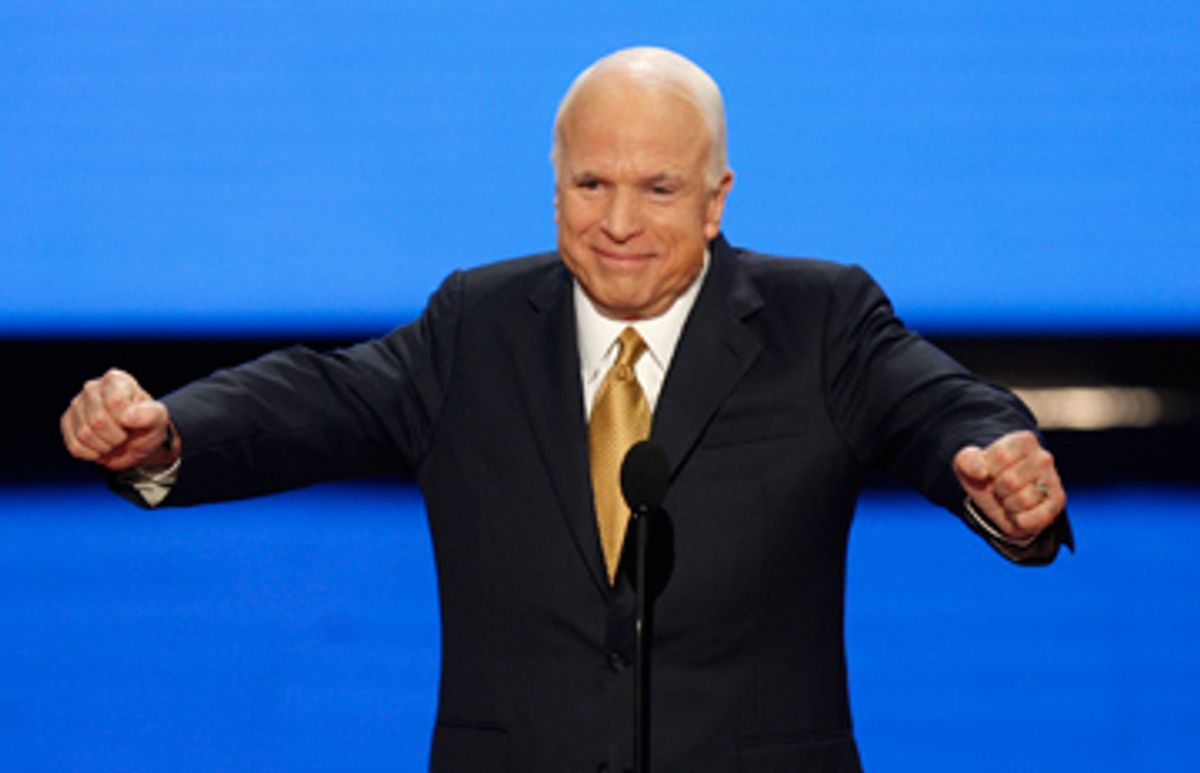 John McCain deserved much better from his campaign staff than he got when they handed him that jumbled convention speech and set him out onto that strange stage. Even though many of the men and women who work for him undeniably belong to that "old, big-spending, do-nothing, me-first, country-second Washington crowd" he scorns, there can be no doubt that they love him, so they should not have let him down so badly. His staff and advisors have had two years to prepare for that moment -- and they gave him words that literally put people to sleep.

Only the mighty force of McCain's personality saved Thursday night's event, the culmination of his political life to date, from disaster. Physically damaged, mentally tough and emotionally open, he is often compelling and effective. It can be touching to watch him express himself. But on this occasion he was burdened by the contradictions of his campaign as well as the emptiness and incoherence of his program.

Of course, his handlers may well have felt that they didn't need to craft a speech telling us what the maverick actually intends to do as president because -- as Rick Davis admitted the other day -- they think this election is about cultural divisions rather than issues. Evidently they also believe that if McCain simply says the word "change" often enough, he can pilfer the Democratic theme.

Perhaps those tactics will win over voters with short attention spans, but at least some people are likely to ask what McCain means when he talks about change. The problem is not that he lacks credentials as a critic of both his own party's corrupt culture and Washington's broader pathologies, but that he has abandoned so much of what once marked him out as different.

The result on display in his convention speech was a kind of political schizophrenia. He praises the leadership of "the president," to whom he has offered unstinting support for the past four years, and at the same time promises to restore the public trust forfeited by the Republican administration, as if someone else has been in the White House all this time.

He denounces both parties for making government bigger, while simultaneously suggesting that he will expand or create new programs for displaced industrial workers, families with autistic children and students in struggling public schools. He scourges Barack Obama for supporting the Bush administration's energy bill, replete with "corporate welfare for oil companies," yet promises to subsidize the same "clean" coal, nuclear and oil development programs that are the foundation of the Bush energy policy.

The question that McCain's speech failed to answer is exactly what, besides the nameplates, will change if he and Sarah Palin win this election. He will slash away at congressional earmarks and expose the self-serving pols who misuse them, but that represents a tiny portion of the federal budget. Earmarks may be important as a symbol of integrity but eliminating all of them would not appreciably change the lives of the people that McCain swore to stand up for in his speech.

Shorn of the boilerplate conservative clichés like charter schools, the real subjects of McCain's speech were attitude and character rather than programs.

"Fight!" he cried more than 40 times, building to a peroration calling upon listeners to join him in battle. "Stand up and fight!" Fight against whom? Evidently against the agents of corruption in both parties, the opponents of change, indeed, all the forces in Washington who serve their own interests rather than the beloved nation. This was the essence of McCainism at its peak, when the maverick hero set forth each day in search of villainous adversaries.

Back then, the Arizona Republican defiantly sought allies on the other side of the congressional divide, as he proudly recalled. He joined with Democrats in opposing the Bush tax cuts, promoting reform of immigration and campaign finance laws, and highlighting the dangers of climate change. The most uplifting passages of his speech recalled those bipartisan alliances with justifiable pride, underlined by a quiet promise to end the "partisan rancor" in Washington and a personal message of goodwill to Obama, his fellow American.

It was almost possible during those brief moments to forget that he has dumped almost all of his original reform agenda during the campaign for his party's nomination. Any politician who can shift positions as sharply and remorselessly as McCain did can always shift back, as conservative Republicans worry he may someday do.

The narrative of his joyous jousting against the tobacco companies and the defense contractors is always inspiring, as is his story of patriotic rebirth in his Vietnam captivity. But we have heard it all before, so many times, not only during the past week but over the past decade.

Thursday night, McCain needed to match his gamble on the Palin nomination with specific proposals for reform and change. He needed to say something new, but that cobbled text gave him nothing new to say.