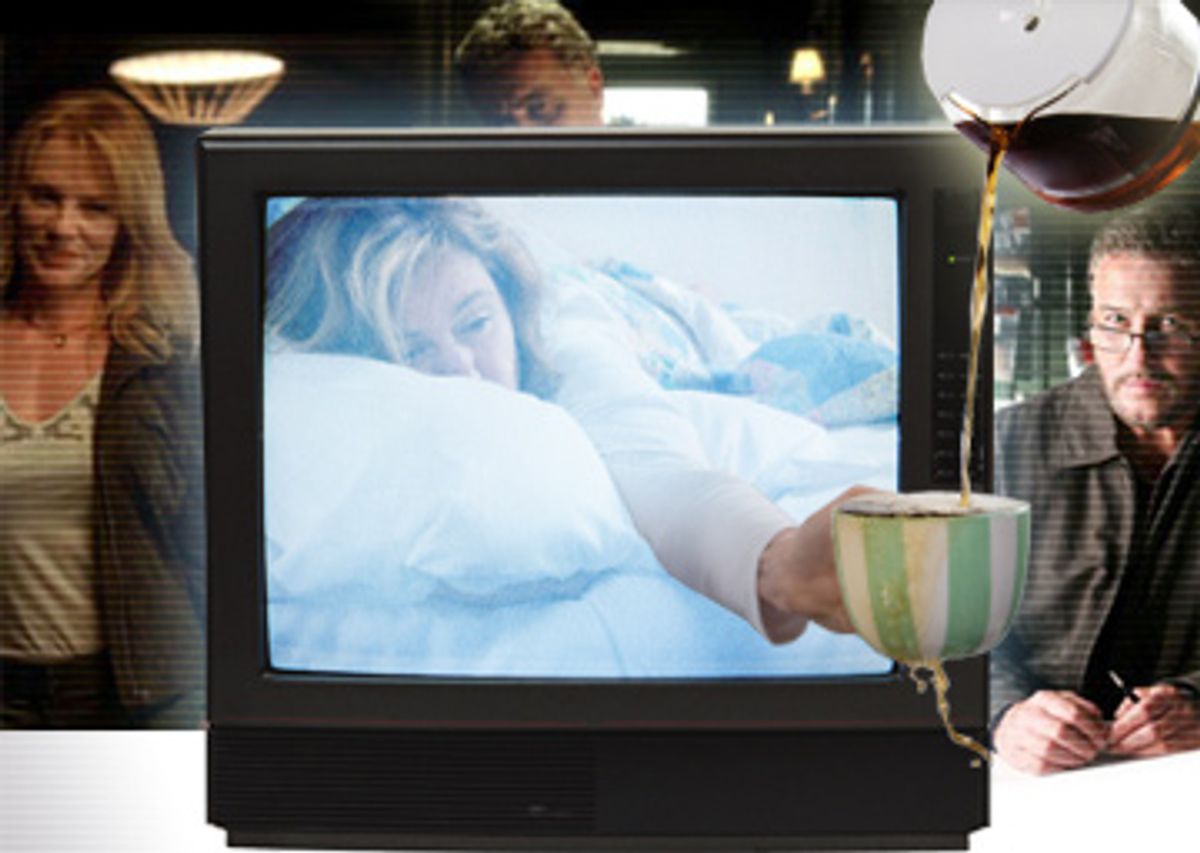 Everyone complains that reality programming has gone too far. But has anyone considered that maybe reality programming hasn't gone far enough? Sometimes, I don't think I will rest my remote until the women from "Real Housewives of Orange County" are cast in a Broadway musical based on "The Bachelor: Paris," until the presidential cabinet is made up of rejects from "Rock of Love," until I see Gordon Ramsay literally kill a contestant, flambé him, and drizzle the whole hot mess with truffle oil.

I am not saying that the pitchmen (and women!) of Hollywood are not doing their jobs. (Because I have seen "Greatest American Dog," and all I can say is, "bravo.") But what once passed for shocking has now become cliché; what began as guilty pleasure has merely become guilt. ("Project Runway," I'm looking at you.) If you really want to push this medium, then, as they say on the shows, you better step up your game.

Real World: Baghdad
It's like: "Full Metal Jacket," but with sex and booze
The cancer at the core of MTV's flagship reality show is the farce of its name. There is nothing real about "The Real World." Not even the boobs. Instead of sending a gaggle of whiny, sexually craven narcissists to some hip, urban location (Brooklyn? Don't piss in my cocktail, MTV), why not send a bunch of whiny, sexually craven narcissists to war? Hey, we need all the help we can get. This will additionally serve to educate a younger generation about the horrors of war, the frailty of human life and how to mix a mojito.

I'm From Sky Mall
It's like: "I'm From Rolling Stone" meets "American Inventor"
The problem with a reality show about journalists is the reality that journalists are boring. They sit in their chairs all day and type. They bitch over IM, and the greatest drama of the day is which part of their lunch will accidentally get spilled on their T-shirts. There's no action in their actions. If you want narrative tension, if you want inspiration, you need only to look upward to the big mall in the sky. The infamous in-flight catalog is nothing short of required reading on the American dream. An over-the-door traction harness! A home-use oxygen bar! Who knew so many pet products were possible? I don't know what's more amazing: that someone created a stepping stool for a dog to get onto a bed, or that people actually buy that stool. MTV's "I'm From Rolling Stone" was a disaster of concept and execution, but "I'm From Sky Mall" -- that could be a triumph of creativity and commerce. Just think, advertisers: free product placement!

Hangover CSI
It's like: "CSI" for binge drinkers prone to blackout
I'm tired of tough and craggy crime scene investigators untangling a mystery from the DNA on an empty Snickers wrapper. These boilerplate intrigues are so predictable. The real mystery is how the hell I got home from that cocktail party last night, or why my dress is balled up in the kitchen and sprinkled with cheddar cheese. "Hangover CSI" probes into the questions that have dangerously plagued many a Sunday morning late-riser: Am I alone? Did I do anything stupid? Whose handcuffs are these? The team of tough and craggy "Hangover CSI" investigators help untangle these riddles -- and bail you out of jail, if need be.

Project Runaway
It's like: Seven strangers, picked to live in a halfway house
There's something awful unseemly about fashion during a recession. Why exactly are a bunch of shrill art students making licorice dresses for Twiggy again? Put the clothes on the backs of the people who need them: America's homeless. On "Project Runaway," sassy designers will clothe downtrodden youth while facing weekly crafting challenges, such as how to make a dress out of a newspaper, how to make a fashionable wrap from nothing but discarded fruit peels, and, of course, how to turn a handful of used condoms and some cigarette butts into a tasteful cocktail dress.

Trading Spleens (or, Heart Swap)
It's like: "Trading Spouses" and "Wife Swap" for the Discovery Channel
How much do you trust your husband? Do you trust him enough to allow him to perform surgery on you? Surely some buffoon will sign this waiver. So here's the deal: Two men from contrasting economic backgrounds compete to see who can best perform open-heart surgery (or spleen removal) on his wife. This heart-stopping (wink!) show combines our society's fascination with medical drama and sociological survey with our insatiable blood lust. The bad news? Somebody may die.

America's Next Top Midget
It's like: Duh
Little people are bigger than ever these days. Verne Troyer has a sex tape, for crying out loud. Gone are the days of Billy Barty, of Gary Coleman, when one little person dominated Hollywood. Now, there are not one but two female comedians with little-person sidekicks (Chelsea Handler and Margaret Cho), and Peter Dinklage is a bona fide movie star. So, who will be America's Next Top Midget? There's only one way to find out. Exploitative reality programming, high five!

Ice Road Truckers
It's like: These, umm, truckers? And they're, like, going to Alaska? And the road is slippery or something?
OK, OK, I know this show exists, but I like to remind myself of that whenever I lose hope. Because some slick bastard actually sold this show to the History Channel, and that slick bastard is my personal hero.

Celebrity Suicide
It's like: "Celebrity Rehab" meets "Oprah"
Washed-up celebrities sign up for a season-long assisted suicide, through which they are guided by several of Oprah's life coaches. Unfortunately, once the last washed-up celebrities off themselves in the year 2023, following a gripping "Celebrity Suicide" season with the cast of "Gossip Girl" and the final remaining Jonas brother, there will be no one left to do reality television and the genre will die.

Until then: Reality-TV programmers, I would like my boatload of cash now.