McCain and Palin go to Dobsonville 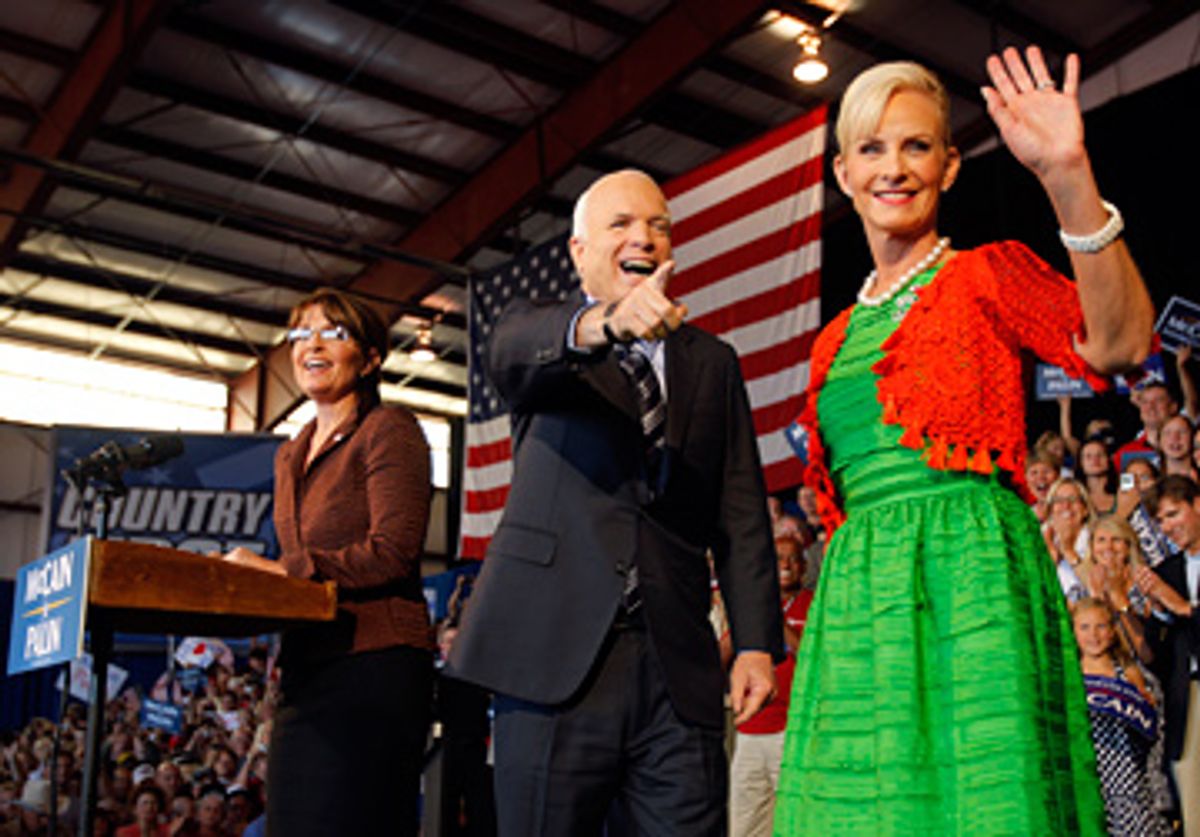 Following their successful reenergizing of the Republican base at the convention in St. Paul, Minn., this week, Sen. John McCain and Gov. Sarah Palin took their show on the road.

Outside a jet hangar in Colorado Springs Saturday, their two campaign planes, one emblazoned with "McCain for President" and the other with "McCain-Palin," gleamed in the midday sun, prominently on display to the crowd of 10,000 supporters who gathered to see, hear and rally behind the newly minted ticket.

McCain and Palin couldn't have picked a more favorable place to continue their campaign. Colorado Springs, the state's second largest city, is home to the Air Force Academy, a military base and more than 80 evangelical churches and ministries, including James Dobson's Focus on the Family. In other words, it's McCain-Palin country.

Prior to picking Alaska Gov. Sarah Palin as his running mate, John McCain had failed to excite the nation's conservatives. Colorado was no exception. On Super Tuesday, Feb. 5, he lost the state's closed GOP caucus to Mitt Romney 60 to 18 percent. That same day, Focus on the Family leader James Dobson refused to endorse McCain, blasting him in a statement that Laura Ingraham read aloud on her radio show: "I am convinced Sen. McCain is not a conservative, and in fact, has gone out of his way to stick his thumb in the eyes of those who are."

Shortly after McCain chose Palin as his running mate, Dobson said her addition to the ticket made him ready to pull the lever for McCain. Yet in Colorado Springs, neither McCain nor Palin acknowledged the evangelical voters. The themes of the brief dual appearance, which lasted less than half an hour, were patriotism, the military and the need to win Colorado, with a few sprinkles about the troubled economy. "There's no better place than Colorado Springs for me to tell you this," said McCain. "We are winning in Iraq." There wasn't a single reference to the social conservatives' agenda, or their massive presence in this city of 400,000. While McCain talked about Iraq, the GOP's fundamentalist base had to be content with a dog whistle: He had picked one of their own as his running mate and brought her to a holy city of the religious right within 48 hours of accepting the nomination.

How important is the evangelical vote to McCain-Palin? Consider 2004. According to the Pew Research Center, white evangelicals were George W. Bush's largest demographic group, accounting for 35 percent of his total vote. Newsweek reports there are now 60 million white evangelicals in America. Gov. Palin shares their values, and according to media interviews and reports, they are flocking in droves to the McCain/Palin ticket.

The doors to the Jet Aviation Center opened Saturday at 9 a.m. Some had been lined up for hours. The McCain campaign said all 12,000 tickets it had made available to the public free of charge were gone. McCain and Palin arrived at 12:30 p.m.

In the intervening hours, thousands congregated on the hot tarmac outside the cramped, dark jet hangar, listening to local politicians and a right-wing radio show host tout McCain and Palin and blast Obama and the Democrats. In between, patriotic music blared from the speakers with everything from "The Battle Hymn of the Republic" to "God Bless America."

There was a lot of chanting. In addition to the now familiar "Drill Now" and "U.S.A., U.S.A." there was "Viva, McCain," which came on the heels of a put-down of Colorado's Democratic Sen. Ken Salazar. High school cheerleaders were on hand to chant "Blue, Red and White -- Fight, McCain, Fight." One of the speakers led the crowd in a long chant of "Boo" following his criticism of Democratic senatorial candidate Mark Udall. Every so often, a speaker would rouse the crowd with references to John McCain or Sarah Palin. To my ear, while both were met with loud cheers of approval, McCain evoked the greater response.

Another speaker said the next 60 days would be "a dogfight." He got confused and called McCain a pit bull, correcting himself immediately to note that McCain was the bulldog and Palin the pit bull, and asked the crowd, "If you were in a dogfight, who would you want on your side?"

The anti-Democratic theme continued with another speaker outlining the differences between McCain and Obama: McCain would ban new government entitlement programs while Obama would expand them. McCain doesn't believe in "tax and spend" your way to prosperity, while Obama will just take pages from the liberal playbook. McCain won't surrender to our enemies.

As a final comparison, the speaker told the crowd Obama can't point to a single official action that shows change, as demonstrated by his "present" votes. The real agent of change, he insisted, is John McCain.

Just as the crowd began to get restless and the conversation around me shifted to queries about where to get water and complaints about the inadequate bathroom facilities, yet another speaker bashed the Democrats, claiming some had thrown away flags after Sen. Barack Obama's acceptance speech at Invesco Field last week, a report the Democrats hotly deny. He announced military veterans would be coming through the crowd to hand out flags -- and he knew those in this crowd wouldn't throw them away. Within minutes, the jet field was awash in a sea of red, white and blue flags.

Palin spoke for about 12 minutes, mostly about John McCain. She told a POW story, mentioned her son who will be leaving for Iraq shortly and said the surge worked. She made a passing reference to Fannie Mae and Freddie Mac, noting the McCain-Palin administration would make them smaller. She said she came to office in Alaska promoting ethics reform and stood up to the good old boys' network. Not surprisingly, she made no reference to the pending legislative ethics investigation into her and members of her staff's alleged conduct while she was governor. "It's great to be here in Colorado," Palin said. "The mountains remind me of being back home in Alaska."

Palin then turned the mike over to Sen. McCain, who opened with a rousing, "Those flags look great!" He followed up with an accolade to Colorado Springs for being home to the Air Force Academy, prompting the loudest applause of the day. He then referenced drilling and tax cuts, told the crowd he intends to fight hard for Colorado and is counting on Colorado Springs voters to bring the state home for him.

After the speeches, surrounded by the pumped-up crowd, the candidates made their way to their waiting jets. Off they went to Albuquerque, N.M.

The media was watching closely and an evangelical-based speech might have alienated millions of women, independents and former Hillary Clinton supporters when it replayed on the evening news. Instead, taking advantage of the strong military presence in the crowd, they stuck to "God Bless America" and "The surge worked," while framing their new change theme in mostly vague economic terms.

The question is, will what works in Colorado Springs work in Toledo, Ohio, Scranton, Pa., Detroit or Gary, Ind.? Can it possibly sell in Florida? And how long can McCain-Palin get away with sweeping the party's evangelical right-wing agenda under the rug? Surely when pressed, even though McCain wasn't fully on board before last week, how can they not affirm their allegiance to an anti-choice, anti-stem cell research, abstinence only, anti-gay rights agenda?

Are mainstream Americans ready to vote for another family values ticket and buy that McCain-Palin on the economy represents change instead of a third term for George W. Bush?

I don't recall anyone ever saying, as Colorado Springs goes, so goes the nation.

Jeralyn Merritt is a criminal defense attorney in Denver. She was one of the trial lawyers for Timothy McVeigh in the Oklahoma City bombing trial. She has provided frequent commentary on MSNBC, CNN and Fox News for the past 12 years and is the creator and principal blogger at TalkLeft.