Why Democrats shouldn't panic about McCain's poll bounce -- yet

While there are some worrying long-term trends for Barack Obama, there are also some caveats about the size of McCain's post-convention, post-Palin surge. 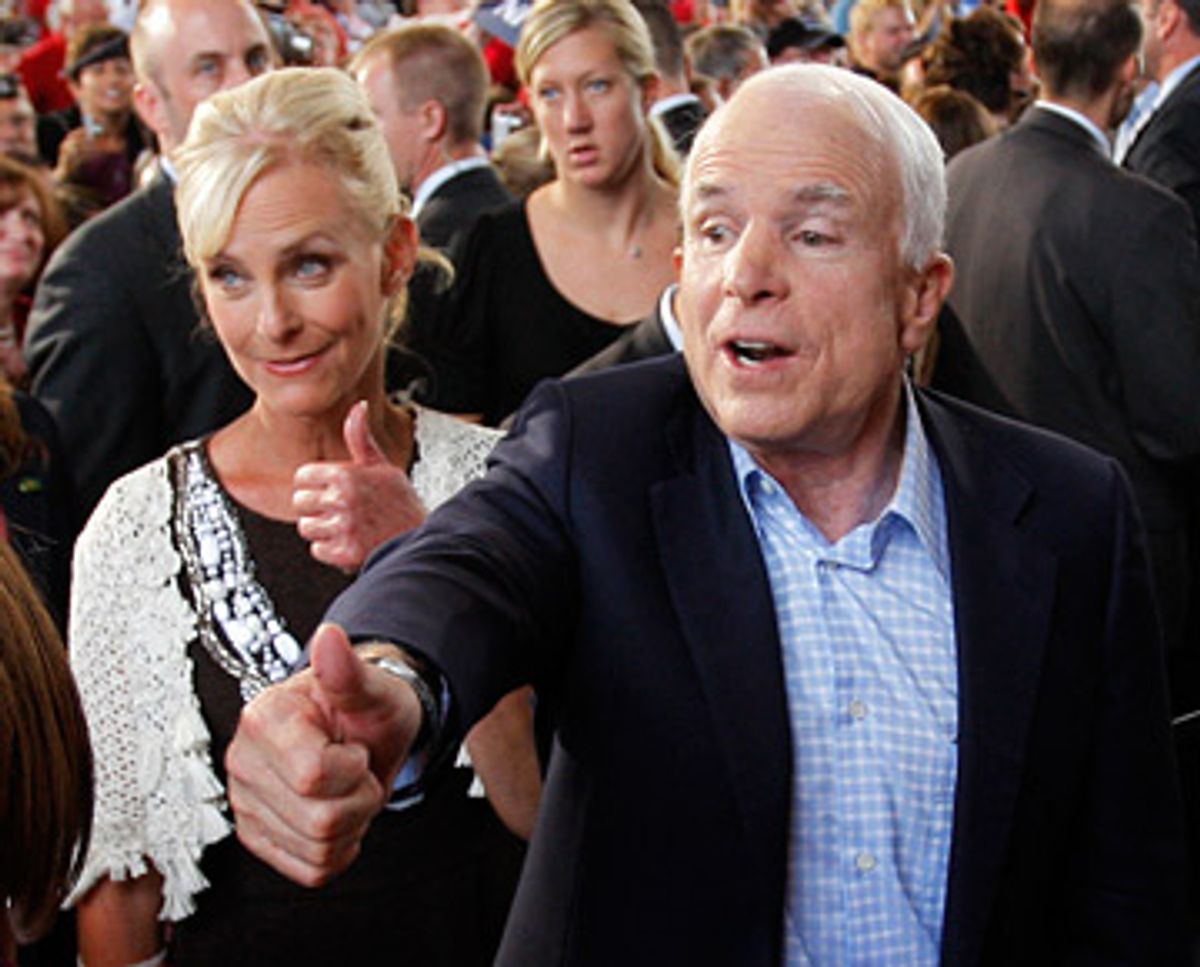 As the poll numbers pour in, the evidence is growing that the Republican ticket of John McCain and Sarah Palin was the winner of the dueling convention/V.P. choice fortnight. With a couple of key polling precincts yet to be heard from (most notably the NBC-Wall Street Journal survey, though these days Republicans tend to dismiss any news entity that includes the letters "NBC" in its name), so far the GOP has gained in five of the six national surveys from its position prior to the two conventions and the initial vice-presidential choice of Joe Biden.

Since these polls offer competing methodologies, sampling techniques and interviewing schedules, the best way to analyze the state of the race is to compare apples to apples, oranges to oranges even if some of the fruit is a bit rotten. (Admittedly, state-by-state polling is really the only barometer that matters, but there are not yet any real guideposts from post-convention polls in key states.)

McCain has gained 4 net points since the day before the announcement of Biden as Obama's running mate -- and the undecided has declined by 6 points, a not-unexpected development given the huge media focus on each side the past two weeks.

A modest gain for McCain and corresponding drop in the undecided. But Gallup, once the leading name in the polling industry, remains tarnished by an incredibly inconsistent 2000 election cycle, where Gore and Bush traded sometimes double-digit "leads" seemingly from one day to the next.

And what about John Zogby? The upstate New York pollster has often gone way out on a limb with some spectacularly accurate or inaccurate readings -- his greatest success being the correct assessment of Al Gore's growing strength toward the end of the 2000 campaign. Zogby's poll is an Internet-based methodology, which carries several sampling weaknesses that may or may not be possible to overcome with weighting procedures:

This is a 6-point McCain gain from before the Democratic National Convention. (Zogby's pre-convention poll did include some interviews completed after the Biden announcement, but his previous survey -- August 12-14 -- also showed a 2-point Obama lead.)

The Hotline tracking poll has a higher undecided than nearly every other major national poll, but the trend is similar:

And then the latest "straight" Gallup poll, conducted jointly with USA Today. It uses a much smaller sample than the three tracking surveys listed above (which all have samples from 2,000-3,000 over any given three-day period) and emphasizes likely voters:

Thirteen points is a stunning boost for McCain. This is the clear outlier of the five but still shows the same pattern -- McCain, who had been gaining in fits and starts throughout most of July and August, continuing his rise after the two conventions, and a declining undecided vote. It is troubling to note for Democrats that in two of these five polls McCain's support level is at or above 50 percent and in two others just under at 48 percent, a place that Obama had been comfortably occupying ever since the spring.

(An aside about the "Likely Voters" referenced in the Gallup/USA Today survey, with its 10-point lead for McCain. Depending on how this determination is reached, it might cause a poll to swing in either direction and perhaps away from the truth. If a likely voter model is based mainly on prior voting history, a standard my firm uses in producing a "Likely Voter" subgroup, that measure leaves out all the first-time voters that 2008 has already produced, and thus understates Obama's support. If it is based mainly on current voter enthusiasm -- another measure my own firm uses -- then McCain's lead carries a different asterisk. Does it mean that Evangelicals who didn't care about the race are suddenly eager to vote? On Election Day, a vote cast with reservations matters as much as the excited kind.)

And finally there's the CNN poll, which actually shows no McCain gain from the period just before the Biden choice, but a 7-point gain for the Republican since Aug. 1:

Before full-bore panic sets in on the left, I would offer several caveats.

First, that these are still surveys taken in the glow of the St. Paul convention. Convention bounces in the traditional schedule -- opposition party in July, incumbents in August -- tended to be short-lived. Bounces may still behave this way in the compressed late season schedule on display in 2008. Obama and Biden have barely been heard from in the 10 days beginning with the surprise choice of Palin; that changes as of today.

Second, that all of the immediate post-Republican convention polling is heavily skewed toward the weekend, with most of the interviewing performed on Friday night or Saturday. (Zogby's Internet sampling is, of course, less affected by time of day or week.) A candidate like Obama with strong support among young, urban and affluent voters may fare less well on such days simply because his constituency is not to be found at home, whereas McCain's older and now more working-class supporters will be.

Third, that the wireless universe is still a major x factor -- I don't know the precise steps any of these firms are taking to reach cellphone voters (and again Zogby has the best chance to include them in his sample), but suffice to say that at best it will be incomplete. Obama could easily perform 1 or 2 points better on Election Day than he does in polls for this reason alone.

Fourth, that the next major campaign event -- the initial debate on Sept. 26 -- is set up to help the challenger. Generally -- and Carter, Reagan, Clinton and the younger Bush are all examples of this phenomenon -- a presidential debate will help a less-known or more inexperienced candidate on the national stage more than his incumbent or better-known opponent. It is a simple matter of exposure providing comfort and reassurance to voters, of the challenger passing some threshold of acceptability, particularly on issues concerning foreign policy or national security. (Foreign policy will be the focus of the first debate.) It is possible that Obama's long year-and-a-half in the spotlight will diminish this potential bounty, or that Palin will benefit at least equally in her matchup in October with Biden, but for now I'm going to assume that the Democrat on the top of the ticket has the best chance of being helped by the debates.

And finally there are the "undecideds" themselves. Their ranks may seem diminished, but it's important to remember that pollsters have been nudging them along. I suspect that some of those firms whose polls have fairly minuscule undecided numbers -- 5 percent or less -- are "reallocating" undecideds in some way, i.e, using other questions to make a best-case estimate about where those voters will fall. The real undecided could still approach 10 percent, which means "undecided" still holds the key to the outcome on Nov. 4. Which model will the undecideds follow? Will they turn away from an unpopular incumbent party, as has often been the case, in which case Obama could still win fairly handily? Or do those of them that are white -- meaning, the vast majority – choose the white candidate, as has happened in many big-city and even statewide races involving an African-American candidate?

Whichever, it is pretty obvious that the narrowing structure of this race has jettisoned some of the Obama campaign's most audacious hopes in this race. Advertising has been curtailed in Georgia and Alaska; can North Carolina, Montana and Indiana be far away? As this writer suggested in June, this is an election that may very well come down to a handful of key states -- Michigan and Ohio, Virginia and Colorado, Wisconsin, Nevada. Same as it ever was, with a couple of exceptions.