What's the difference between Palin and Muslim fundamentalists? Lipstick

A theocrat is a theocrat, whether Muslim or Christian. 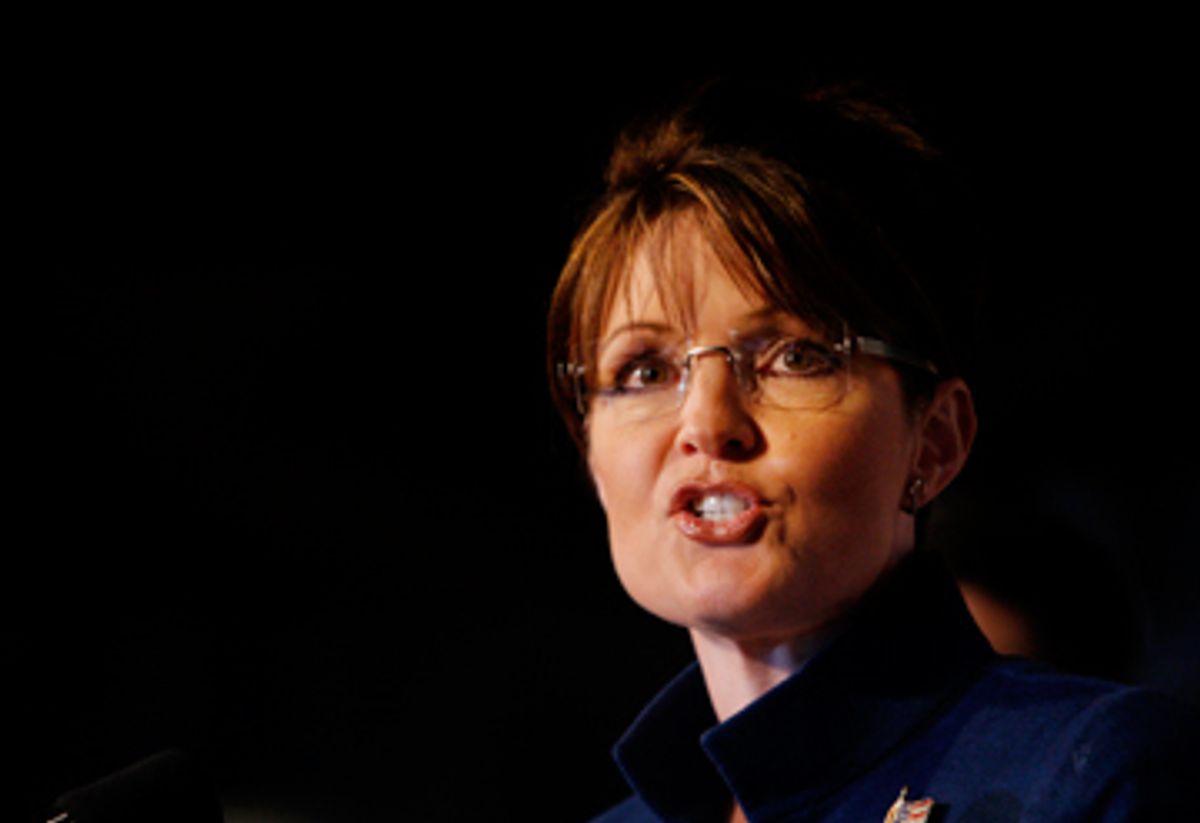 John McCain announced that he was running for president to confront the "transcendent challenge" of the 21st century, "radical Islamic extremism," contrasting it with "stability, tolerance and democracy." But the values of his handpicked running mate, Sarah Palin, more resemble those of Muslim fundamentalists than they do those of the Founding Fathers. On censorship, the teaching of creationism in schools, reproductive rights, attributing government policy to God's will and climate change, Palin agrees with Hamas and Saudi Arabia rather than supporting tolerance and democratic precepts. What is the difference between Palin and a Muslim fundamentalist? Lipstick.

McCain pledged to work for peace based on "the transformative ideals on which we were founded." Tolerance and democracy require freedom of speech and the press, but while mayor of Wasilla, Alaska, Palin inquired of the local librarian how to go about banning books that some of her constituents thought contained inappropriate language. She tried to fire the librarian for defying her. Book banning is common to fundamentalisms around the world, and the mind-set Palin displayed did not differ from that of the Hamas minister of education in the Palestinian government who banned a book of Palestinian folk tales for its sexually explicit language. In contrast, Thomas Jefferson wrote, "Our liberty cannot be guarded but by the freedom of the press, nor that be limited without danger of losing it."

Palin argued when running for governor that creationism should be taught in public schools, at taxpayers' expense, alongside real science. Antipathy to Darwin for providing an alternative to the creation stories of the Bible and the Quran has also become a feature of Muslim fundamentalism. Saudi Arabia prohibits the study, even in universities, of evolution, Freud and Marx. Malaysia has banned a translation of "The Origin of the Species." Likewise, fundamentalists in Turkey have pressured the government to teach creationism in the public schools. McCain has praised Turkey as an anchor of democracy in the region, but Turkey's secular traditions are under severe pressure from fundamentalists in that country. McCain does them no favors by choosing a running mate who wishes to destroy the First Amendment's establishment clause, which forbids the state to give official support to any particular theology. Turkish religious activists would thereby be enabled to cite an American precedent for their own quest to put religion back at the center of Ankara's public and foreign policies.

The GOP vice-presidential pick holds that abortion should be illegal, even in cases of rape, incest or severe birth defects, making an exception only if the life of the mother is in danger. She calls abortion an "atrocity" and pledges to reshape the judiciary to fight it. Ironically, Palin's views on the matter are to the right of those in the Muslim country of Tunisia, which allows abortion in the first trimester for a wide range of reasons. Classical Muslim jurisprudents differed among one another on the issue of abortion, but many permitted it before the "quickening" of the fetus, i.e. until the end of the fourth month. Contemporary Muslim fundamentalists, however, generally oppose abortion.

Palin's stance is even stricter than that of the Parliament of the Islamic Republic of Iran. In 2005, the legislature in Tehran attempted to amend the country's antiabortion statute to permit an abortion up to four months in case of a birth defect. The conservative clerical Guardianship Council, which functions as a sort of theocratic senate, however, rejected the change. Iran's law on abortion is therefore virtually identical to the one that Palin would like to see imposed on American women, and the rationale in both cases is the same, a literalist religious impulse that resists any compromise with the realities of biology and of women's lives. Saudi Arabia's restrictive law on abortion likewise disallows it in the case or rape or incest, or of fetal impairment, which is also Gov. Palin's position.

Theocrats confuse God's will with their own mortal policies. Just as Muslim fundamentalists believe that God has given them the vast oil and gas resources in their regions, so Palin asks church workers in Alaska to pray for a $30 billion pipeline in the state because "God's will has to get done." Likewise, Palin maintained that her task as governor would be impeded "if the people of Alaska's heart isn't right with God." Supreme Leader Ali Khamenei of Iran expresses much the same sentiment when he says "the only way to attain prosperity and progress is to rely on Islam."

Not only does Palin not believe global warming is "man-made," she favors massive new drilling to spew more carbon into the atmosphere. Both as a fatalist who has surrendered to God's inscrutable will and as a politician from an oil-rich region, she thereby echoes Saudi Arabia. Riyadh has been found to have exercised inappropriate influence in watering down a report in 2007 of the Intergovernmental Panel on Climate Change.

Neither Christians nor Muslims necessarily share the beliefs detailed above. Many believers in both traditions uphold freedom of speech and the press. Indeed, in a recent poll, over 90 percent of Egyptians and Iranians said that they would build freedom of expression into any constitution they designed. Many believers find ways of reconciling the scientific theory of evolution with faith in God, not finding it necessary to believe that the world was created suddenly only 6,000 ago. Some medieval Muslim thinkers asserted that the world had existed from eternity, and others spoke of cycles of hundreds of thousands or millions of years. Mystical Muslim poets spoke of humankind traversing the stages of mineral, plant and animal. Modern Islamic fundamentalists have attempted to narrow this great, diverse tradition.

The classical Islamic legal tradition generally permitted, while frowning on, contraception and abortion, and complete opposition to them is mostly a feature of modern fundamentalist thinking. Many believers in both Islam and Christianity would see it as hubris to tie God to specific government policies or to a particular political party. As for global warming, green theology, in which Christians and Muslims appeal to Scripture in fighting global warming, is an increasing tendency in both traditions.

Palin has a right to her religious beliefs, as do fundamentalist Muslims who agree with her on so many issues of social policy. None of them has a right, however, to impose their beliefs on others by capturing and deploying the executive power of the state. The most noxious belief that Palin shares with Muslim fundamentalists is her conviction that faith is not a private affair of individuals but rather a moral imperative that believers should import into statecraft wherever they have the opportunity to do so. That is the point of her pledge to shape the judiciary. Such a theocratic impulse is incompatible with the Founding Fathers' commitment to tolerance and democracy, which is why they forbade the government to "establish" or officially support any particular religion or denomination.

McCain once excoriated the Rev. Jerry Falwell and his ilk as "agents of intolerance." That he took such a position gave his opposition to similar intolerance in Islam credibility. In light of his more recent disgraceful kowtowing to the Christian right, McCain's animus against fundamentalist Muslims no longer looks consistent. It looks bigoted and invidious. You can't say you are waging a war on religious extremism if you are trying to put a religious extremist a heartbeat away from the presidency.