McCain skewered on "The View"

Barbara Walters and co-hosts grill the presidential nominee with hard-hitting questions the press has been too squeamish to ask. 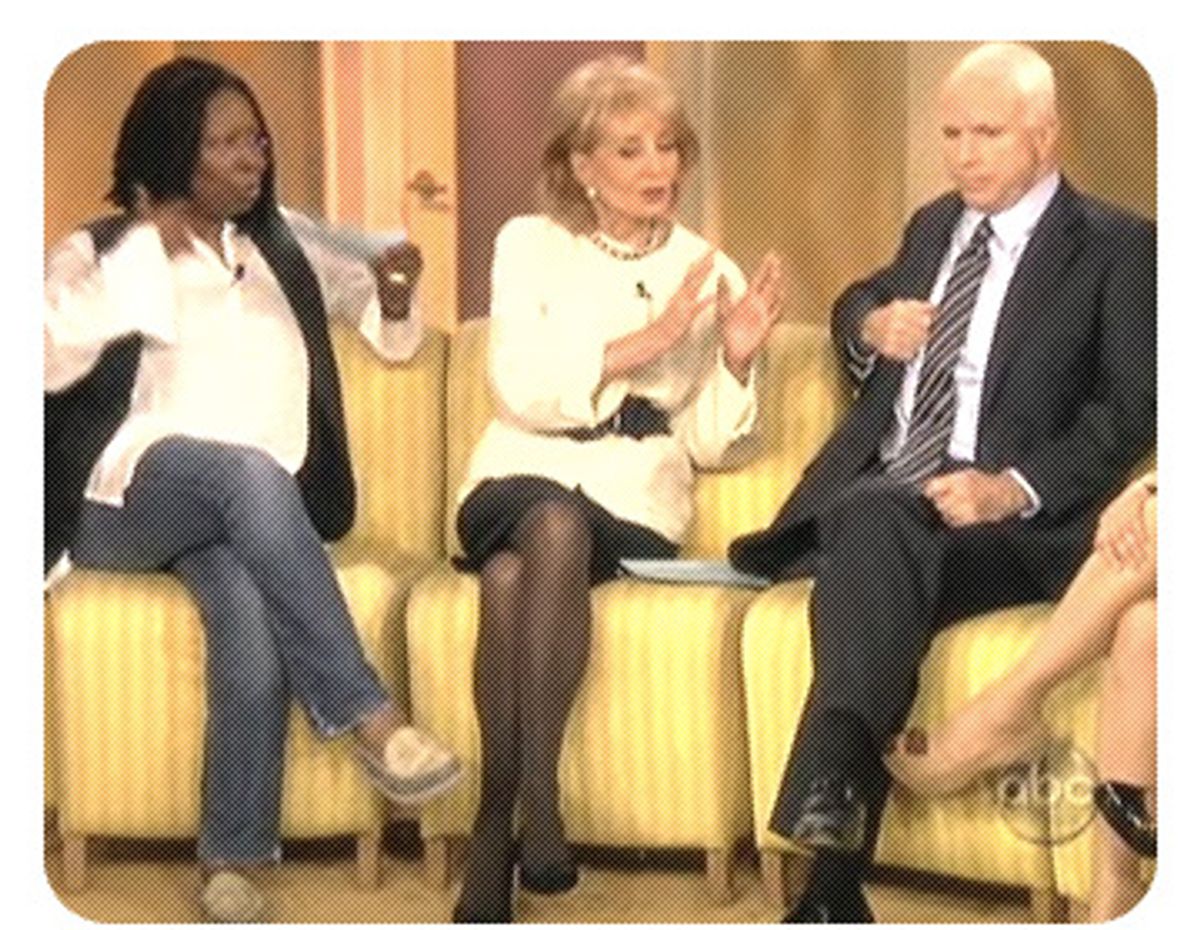 Roll your eyes all you want, but I for one will never again underestimate the women of ABC's "The View," who today opened a can of whupass on John McCain, administering an interview that should turn the faces of legitimate press red with shame. (A video of the second segment is embedded below. All clips can be viewed here.)

The hard-hitting journalism came courtesy of none other than Whoopi Goldberg, Barbara Walters, Joy Behar, Sherri Shepherd and Elisabeth Hasselbeck (yes, even conservative sylph Hasselbeck threw down!), who welcomed McCain to their comfy couch on Friday morning as the spider welcomes the fly. As soon as he settled in and got nice and comfortable, the women proceeded to slice and dice the Arizona senator on everything from his dishonest attack ads to his stance on abortion and interpretation of the Constitution, his feelings on secularism and the qualifications of his running mate.

First up were McCain's recent ads, including one implying that Barack Obama wants to offer sex ed to kindergartners, and another asserting that Obama used the phrase "lipstick on a pig" in reference to Sarah Palin, when in fact he applied it to McCain policy. "There are ads running from your campaign," said Joy Behar, "now we know that those two ads are untrue, they're lies." Here Behar was using words that the press has been too squeamish to utter to McCain's face. She went on, "And yet, you at the end of it say you approve these messages. Do you really approve them?" Such a simple, straightforward question. One that someone should have asked McCain days ago.

When McCain replied that his ads were not lies, Walters quickly stepped in to point out to him that "you yourself said the same thing about putting lipstick on a pig." McCain responded that his use of the folksy turn of phrase was in reference to a healthcare plan, and Walters again cut him off, saying, "But [Obama] talked about change. He wasn't talking about Sarah Palin."

McCain was left twisting, his only out the weak rejoinder, "Senator Obama chooses his words very carefully." At that moment, it seemed that McCain himself does not.

In the second segment, Whoopi Goldberg introduced McCain after a commercial break, jocularly asking if she was still allowed to call him J-Mac, then punching him in the gut with "a straightforward question ... because I'm curious about your choice for vice president: Do you believe in the separation of church and state?"

Let's take just a moment and offer a tip of the hat to Goldberg (and her colleagues), for homing in on the simplest iteration of what has been on the minds of many since they began to read about Palin's evangelical beliefs, her reading of God's will into the mission of Iraq, her belief in banning abortion even in cases of rape and incest.

Goldberg pressed McCain on whether or not, given the fact he assured her that, "sure," he believes in secularism, he experienced "a moment of pause" before selecting Palin, since, "god forbid anything happen" to him, she might be in control and not share his views on this linchpin of our democracy.

"Judeo-Christian values were the foundation of our nation. In God we trust," McCain unreassuringly responded. "[There was] clearly a belief that God has a plan for the world and that we should do what we can to live as good a life as we can and trust that God -- in God we trust -- will guide this nation and this world to a better existence. You're entitled to ... not believing in God, but I think we should respect the views of those who believe in God and believe that we are a special nation ... And we believe that God does play a role, not in whether we win or lose elections, but whether we have a better world and a better future and better lives."

After trying to interject about 20 "buts," Goldberg finally was able to restate her question, which was that, since this is a nation filled not only with Judeo-Christian believers but also with "Muslims ... Zoroastrians ... [and] Wiccans," as president, should he win, would McCain govern this nation "as God would have you do it, or do you govern this nation for the greater good of the people in it?"

McCain replied, "I think everybody, obviously, is entitled to their individual faiths and beliefs, including not believing in anything. But I pray every day."

Next up was Hasselbeck. Promising McCain "no softballs coming from me, even though you have my vote," the youngest "View" co-host asked him if he, and in turn if Palin, would work to overturn Roe v. Wade. McCain said that though he'd impose no "litmus test" on nominees to the court, "they would have to have a clear record of strict interpretation" of the Constitution. Here Walters tag-teamed again, clarifying that this was simply "another way of saying 'people who would want to overturn Roe v. Wade."

When McCain responded by saying he thought "Roe v. Wade was a very bad decision, Barbara," the "View" audience audibly booed him, and when he continued to talk up his interest in a strict interpretation of the Constitution, Goldberg piped up, wondering, "Do I have to worry about becoming a slave again? ... Because there are certain things that happened in the Constitution that had to change." To this, all McCain could say was, "I understand that point. Thank you. That's an excellent point. I thank you." (Walters did score a lifetime's worth of wacko points for her weird reassurance to Goldberg and Shepherd, "Don't worry, us white folks will take care of you!")

Finally, Barbara Walters, showing teeth she hasn't bared in years, pressed McCain -- and I mean, with a steam iron -- on what his running mate meant in her interview with Charlie Gibson on Wednesday when she said she was chosen to "reform" Washington. Given that McCain himself has been a working inhabitant of the country's capital for 22 years, what or whom, wondered Walters, was Palin supposed to reform? "You?" she asked McCain incredulously. "The Senate? Congress? The Republican Party?"

"The Democrats have been in charge of both houses of Congress for the past two years," McCain said hopefully, clearly trying to help flesh out the Republicans' bizarro-world story line that the liberals (cunningly disguised as George Bush, Dick Cheney, Karl Rove and Donald Rumsfeld) have been running the country.

But Walters wasn't having it. "She was chosen to reform the government. Who is she going to reform?" she asked again. McCain tried to argue that, with a flick of her wand, his Change Maker from up north would transform everything: "The Republican Party, the Democratic Party, even the Independent. She'll reform all of Washington!"

But Walters wasn't mollified. "How?" she hammered. "How? What is she going to reform specifically?" When McCain replied that she would do just what she did in Alaska, like clean up earmark spending, Walters said, "She also took some earmarks." Not as governor, McCain claimed (despite the fact that Palin put in for a load of earmarks in the past year). When McCain said she freed Alaska from debt for the first time, Walters pooh-poohed it. "OK, but what's the biggest reform --" And that's when McCain finally got testy, saying, "You've got to let me finish" and explaining how Palin gave government back to the people of Alaska. "What is she gonna do in Washington?" replied an unimpressed Walters. "The same thing," said McCain.

This whole exchange, all of it, was not only great television, but a series of great questions from a group of people who seemed not to be interested in pussyfooting around. "The View" hosts appeared not to be worried about being labeled elitist (perhaps because their show is populist by definition) or leftist (perhaps because one of them is a staunch conservative) or sexist (perhaps because they are all women and know that to question a candidate's actual qualifications for a job, not based on gender but on experience and beliefs and policy history, is the opposite of sexist).

But the best part, perhaps, was that after making McCain writhe in agony for the first two segments, after eating him for breakfast -- Mmm! Delicious! -- the ladies of "The View" were such coldblooded professionals that they were able to usher McCain's wife, Cindy, on and kibitz with her about cookie recipes for the remainder of the show.