What small-town America is saying about Obama

In diners and mobile homes from New Mexico to North Carolina, I listened to working-class people try to make sense of a black president named Barack. 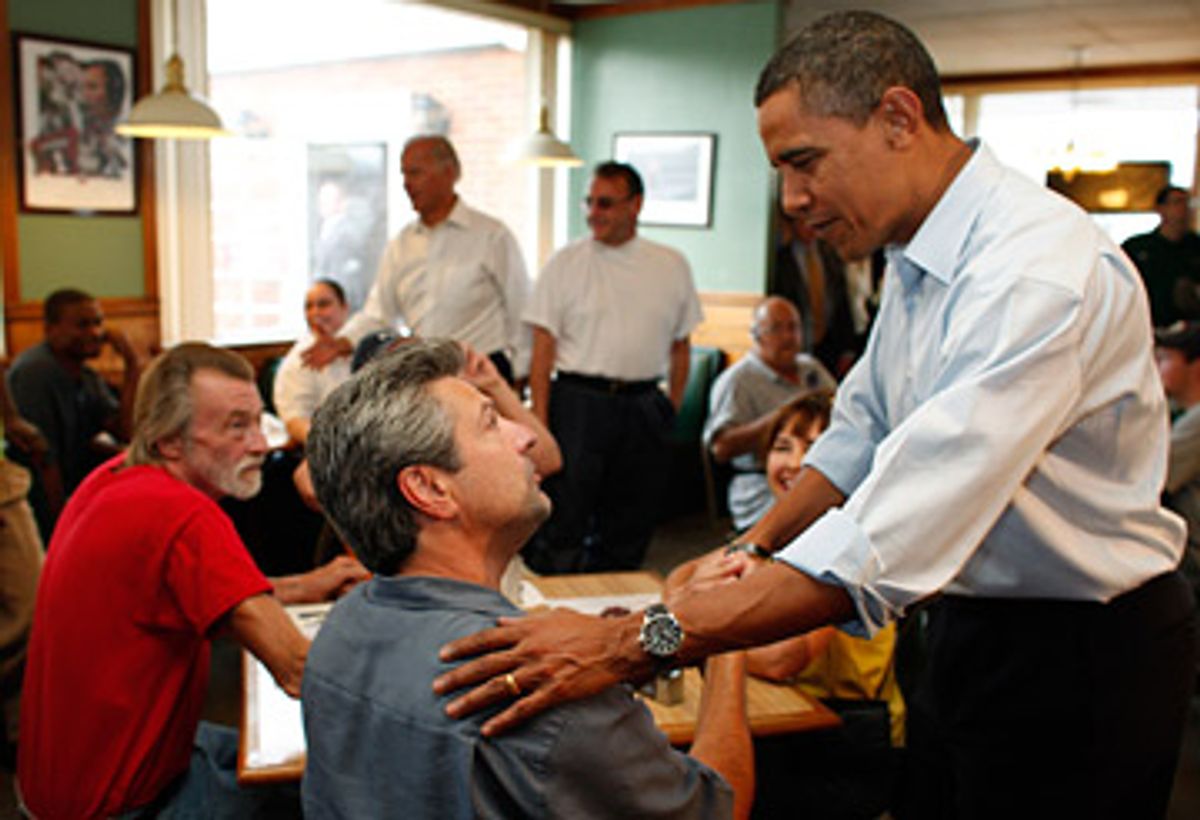 With less than two months until voting day, there are doubts hanging over Barack Obama's campaign -- and they aren't just due to Alaska's top moose-hunting hockey mom jolting the race and electrifying the Republican faithful. Although Obama has touted himself as a post-racial candidate, whether America is ready to elect a black man for president remains a vexing question for his supporters. In a tight national race, Obama continues struggling to gain wider support, particularly among white working-class voters and independents in battleground states.

But Obama has also inspired tens of millions of Americans with a powerful and historic campaign. After eight years of Bush and widespread disillusionment with Republican governance, could Obama's inability to pull away from John McCain really come down to his skin color?

For three months during this summer and early fall, I've been traveling across America, exploring the nation's small towns and rural areas and meeting the people there. From Michigan to New Mexico to North Carolina, I've conducted dozens of interviews with white working-class voters across 18 states, gauging, among other things, their thoughts and feelings about the first black man to have a serious shot at winning the White House. Beyond Obama's race, what I found was a more complicated set of concerns -- whether accurately informed or not -- about his religious faith, values and cultural and educational background. That is, many of these white rural voters expressed a discomfort that may have more to do with unfamiliarity about the type of person Barack Obama is, rather than with direct concerns about his race.

Although I encountered a scattering of openly racist views, they were among a small minority. (These voters would probably never vote for a Democrat for president anyway.) Many voters dismissed the notion that hesitancy about Obama is due to his race.

"Obama isn't even really black -- Bill Clinton is more black than Obama," said Mike Wallace, 44, of Dearborn, Mich. Wallace is a United Auto Workers pipe fitter who plans to vote for McCain, although he believes the vast majority of his co-workers at the local Chrysler plant will vote for Obama, as recommended by a UAW handout. Some voters revealed support for Obama even in blunt terms that seemed to run against their racial preferences. "I'm not a fan of the blacks," explained Dennis Rodriguez, 48, a restaurant manager from Manistique, Mich., "but I just think Obama is the right man for the job." Bob Morin, 53, a custodian and swing voter from Cubero, N.M. (a state Bush won by just 5,000 votes in 2004), told me, "I've got a few friends who say, 'There's no way I'm voting for a black guy,' but I think most people have gotten over it."

So why hasn't Obama gained better traction outside the big cities?

"He's just not someone I can personally relate to," explained Cathy Massingale, 33, of Cullowhee, N.C., a Democrat who first supported John Edwards this election, and then Hillary Clinton. "Obama just doesn't feel like someone who knows me." Massingale's husband is in the military, and she wants to see a withdrawal of U.S. troops from Iraq. But she said she remains undecided about Obama or McCain.

It may be that hesitancy about Obama stems from his being a type of black person that rural Americans are unfamiliar with. White rural Americans tend to identify two types of black Americans. They know local, churchgoing black people who like to hunt and fish, whose lives are similar to their own. On the other hand, they tend to think of urban blacks as a stereotype seen widely in pop culture (bling-wearing gangstas) or as the kind of black people they see on local TV news (often criminal suspects or convicts). Obama fits neither of these tropes, as a highly educated, upper-middle-class, self-made urban black man. (One with lighter skin and of mixed race, to boot.) He's not foreign because he's black, he's foreign because he's unknown -- especially as someone seeking a job held exclusively by white men for more than two centuries.

"Obama's like Jesse Jackson -- what does he know except a bunch of cities with lots of blacks?" asked 60-year-old construction worker Louie, in White Branch, Mich., a lifelong Democrat who said he probably won't vote for either candidate this year.

In the quaint and tidy town of Yellville, Ark., Cassie Gilley, 48, a soft-spoken school administrator, explained her view of white, rural America's evolving relationship to race. "There's a difference between racist and prejudiced," she said over sandwiches at Subway, after a service at Yellville's First Baptist Church. "A lot of people around here just haven't spent much time with black people. When they get to know a black person, it's OK. But they will bring their prejudice in at first."

In overcoming that formidable hurdle, the many lingering rumors, myths and paranoid fears that dog Obama's campaign make the task especially challenging.

Just outside of Cranks, Ky., in Harlan County, Mack Middleton is a retired coal miner and a die-hard union man -- a United Mine Workers bumper sticker adorns his Dodge van -- but he is also a swing voter who voted both for Ronald Reagan and Bill Clinton. This year, Middleton, 62, and his wife, Janice, 57, aren't sure if they are going to vote at all.

"Obama, he's not our kind of people," said Middleton in a gruff, bitten-off speaking style, taking a break from canning green beans at the couple's double-wide mobile home. "He don't believe in the hereafter, and the Lord, the way I look at it ... he's Muslim."

Several people, from Michigan to Alabama, referred to an insidious picture circulating on the Internet of Obama wearing a white head-wrap and a robe next to a photo of Osama bin Laden in similar dress, with the caption, "What's the difference between Osama and Obama? Just a little B.S." According to a survey in July by the Pew Research Center, 12 percent of Americans still believed Obama was a Muslim -- even after the long Democratic primary battle that was covered heavily in the national media. Among rural Americans, 19 percent still believed he was a Muslim.

In Logan, W.Va., abandoned brick storefronts haunt downtown while the Fountain Plaza mall, anchored by a Wal-Mart Supercenter, gleams on the hill above town. Logan County was one of a few counties that voted for John Kerry in 2004 (George W. Bush won West Virginia overall), and, given a struggling economy, would seem primed to swing Democratic again. But Scott, 26, a former trucker currently unemployed, isn't going to vote for Obama. "I know it sounds stupid," he says taking a long drag from his Maverick cigarette, "but Barack Hussein Obama? And if he gets in, somebody'll take him out real quick," he said, referring to potential assassination, which was a surprisingly common theme along rural back roads.

The seemingly endless list of falsehoods about Obama -- that he took his oath of office on the Quran, that he doesn't salute the flag, that he refuses to wear an American flag lapel pin -- could be interpreted as excuses for being uncomfortable with his race.

But class matters too, in regions like Appalachia, where Obama had a particularly tough time winning votes in the Democratic primary against Hillary Clinton.

Inez, Ky., is a town that epitomizes the Democratic Party's decline from its peak of power in the 1960s. President Lyndon Johnson once stood on a porch in the impoverished town in the heart of Appalachia and declared a War on Poverty. Today in Inez, population 600, consumption of pain pills is a popular pastime, and the poverty rate hovers around 37 percent, three times the national average. In April of this year John McCain gave a speech in Inez, detailing the failures of welfare, to a receptive audience. In 2004, Martin County, of which Inez is the seat, voted for George W. Bush by a 2-to-1 ratio. The chairman of the Republican National Committee, Robert Duncan, lives in Inez.

Gary Ball, a former coal miner and editor of the firebrand Mountain Citizen newspaper that is published in Inez, points to an authenticity gap for Obama. "People around here see Obama as being privileged," he said. Never mind McCain -- with his seven houses -- or recent blue blood candidates George W. Bush, John Kerry and Al Gore. "We know Obama's plenty book-smart ... but I liked Harry Truman, the last president to have a simple high school education."

While George W. Bush received the same Harvard benediction as Obama, Bush never identified as an intellectual. Obama's modest, single-mom upbringing does not overcome his evident intellectualism, according to Ball; for rural whites, he says, Obama remains on the losing end of this authenticity test.

Sarah Palin's biography, of course, raises the stakes. Touting her moose-hunting, snowmobile-riding, small-town sensibility, Palin turned a convention of restless delegates into an explosion of camp revival energy, shifting the momentum of the race John McCain's way. It is obvious that rural, working-class whites are more comfortable with the conservative small-town Palin, to whom they can relate.

Beyond the necessity of connecting with rural America, the Obama campaign is hoping to gain ground by winning over suburban independents in battleground states. In Columbus, Ohio, I encountered several white, upper-middle-class swing voters who said they would support Obama. But Terry Daniels, 53, a black man who runs a clothing store in downtown Columbus catering to the city's suburbanites, was skeptical that would happen. "Everyone likes to think they're progressive," Daniels said, "but when it comes down to it, they're not going to vote that way."

Even though the economy purports to be a top issue for voters, the 2008 race has been as much of a contest of personalities as any in recent memory. (Even before Palin entered the picture.) Obama's fate in November may in part depend on his ability to better familiarize the more insular segments of white America with an under-reported but growing post-civil rights demographic: the well-educated black urban middle class. Obama's story is a historic example of this achievement, but it remains to be seen if America is ready to celebrate it by granting him the nation's highest office.