"I fear for my country"

Former Gov. Tony Knowles and other Alaska Democrats warn not to underestimate Sarah Palin's political skills -- or how unsuited she is for the vice presidency. 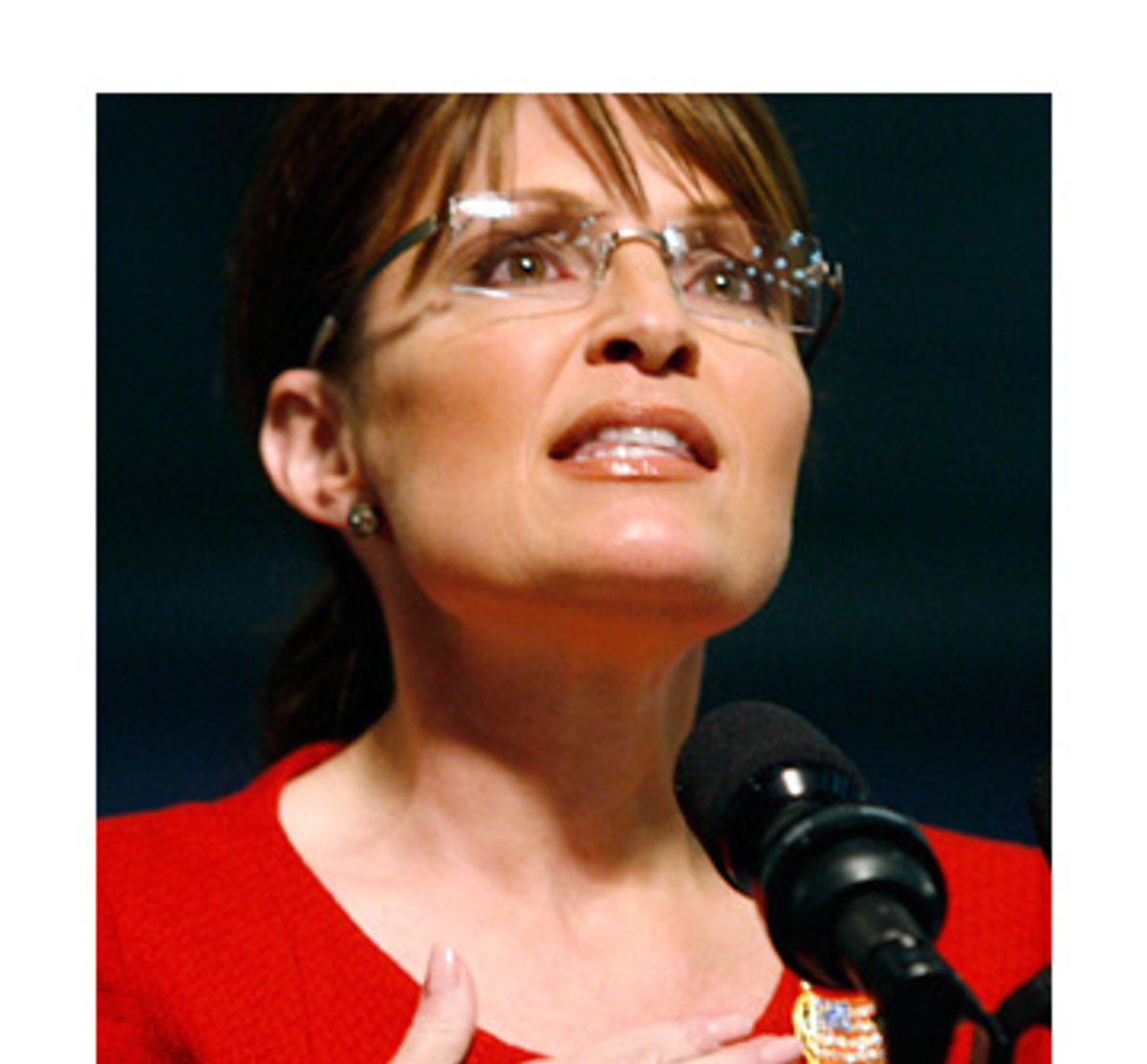 Can the Republicans really use national novice Sarah Palin to juice the doddering McCain campaign all the way to the White House?

You bet, warn Alaska Democrats. They've seen this movie before.

"Her campaign locked her in a closet during the governor's race in 2006 -- and they're doing the same thing now," said one longtime Democratic consultant here, who like many others asked to remain anonymous because "it's a small state and Sarah takes names and numbers."

"They're setting a trap for the country," he continued. "Keep her away from the press, while they set up these phony 'tests' for her. The first test was her speech before the Republican convention. They spread all this nervous chatter about her -- is she ready for prime time, can she pull it off?

"But all Alaskans knew she would do fine. She was a TV sportscaster, for God's sake. And of course a telegenic star was born."

Veteran Democratic operatives in Alaska admit Palin took them completely off-guard when she burst into the state's spotlight during the gubernatorial campaign.

"She didn't have any major backers, she seemed to come out of nowhere," said Bill Parker, a former state legislator and deputy commissioner of corrections. "People in Anchorage tend to think of people from Wasilla as toothless hicks, living on dope and poached moose. But she came out of nowhere and beat us like a drum."

Joe McKinnon, another longtime activist in Democratic state politics and a former assistant state attorney general, agreed: "We all dismissed her as a cheerleader. But she turned out to be a point guard. It's real easy to underestimate her."

"If they ask her foreign policy questions, she'll deflect them by saying something like, 'I may not know a lot about Azerbaijan, but I know a lot about my country,'" predicted the Democratic consultant.

But the truth, said Michael Carey, former editorial page editor of the Anchorage Daily News, is that Palin knows little about the United States either. "She's spent her whole life up here in Alaska, except for a few years in college in Idaho."

In a way, Carey added, even Alaskans are still getting to know Sarah Palin. She seems to try on different political identities whenever convenient. "When she aggressively attacked Obama and the Democrats at the convention -- all that stuff about community organizers and the media -- Alaskans felt, 'Where did that come from?' She has not been a particularly ideological governor, but they're clearly using her to rally the base now.

"We also never thought much about her religious views -- she always kept stuff like creationism and abortion in the background. But now that she might be a heartbeat from the presidency, we all better find out more about her views on the Armageddon and the End of Days."

Tony Knowles, Alaska's Democratic governor from 1994 to 2002, has a particularly intimate view of the Palin phenomenon. He said that he has decided to violate his rule against speaking ill of other Alaska governors, out of deep concerns about the GOP's vice-presidential pick and the kind of campaign the party is building around Palin.

Knowles was beaten by the upstart Palin in his attempt for a third term in 2006. Palin came into the race against Knowles after demolishing corruption-plagued incumbent Gov. Frank Murkowski in the Republican primary. Palin was riding a wave as a clean-government crusader, after exposing the corruption of a fellow Republican on the state's oil and gas commission. Fed up with the state's rampant political corruption, Alaska voters elected the seemingly squeaky-clean hockey mom by a wide margin.

But, Knowles charged, after less than two years in the governor's office, Palin now has her own ethical cloud hanging over her. In her brief political career, according to Knowles, Palin has demonstrated a pattern of using political office to settle personal scores and pad her lifestyle.

Knowles pointed to the recent "per diem" controversy as one example of the petty ways Palin has "gamed the system" for personal gain. "By establishing the governor's house in Juneau as her home of record, instead of her family residence in Wasilla where she actually lives, Palin was able to charge the state for $17,000 in per diem expenses. Everybody in the state knows she doesn't really live in Juneau -- she just stays there a few days when the Legislature is in session. She lives in Wasilla, so she shouldn't be generating travel expenses there. But she hit up the state for $17,000 a year for meals -- that's not what I call just macaroni and cheese for the kids."

Knowles thinks the "Troopergate" scandal -- Palin's alleged misuse of her office to fire a state trooper involved in a messy divorce with her sister -- is an even more blatant example of the vice-presidential candidate's abuse of power: "This is the very definition of corruption -- using the power of your office and directing government employees to do something illegal for your personal advantage. She was using her office to pursue a personal vendetta."

And, Knowles pointed out, after promising to fully cooperate with a legislative investigation, Palin has since hired a lawyer at the state's expense, who has advised her staff not to cooperate, and she is now trying to sabotage the probe by handing the case to a personnel board made up of her own appointees. "She clearly doesn't want the truth out before the election. The fact that she might be elected before the American people know the full story is very disturbing."

Knowles, like other Alaska Democrats, is urging the media to keep digging into Palin's record so voters get a true picture of the woman who could become vice president. "Everybody has been stunned by her selection. The fact that Senator McCain didn't call one person in Alaska -- whether an advocate or adversary, family, friend or foe -- says a lot about his judgment. The only person he apparently called was her lawyer in the Troopergate scandal.

"The only reason for her selection is political. Which is fine as one part of your calculation. But in this case, the decision was made at the expense of national security.

"I fear for my country if the McCain-Palin ticket prevails," said Knowles. "The stakes are so huge in this election. We have the opportunity for real change, to rebuild our economy and our moral standing in the world. But there is nothing coming out of the Republican campaign. They're just using Palin to take us back to the old culture wars."