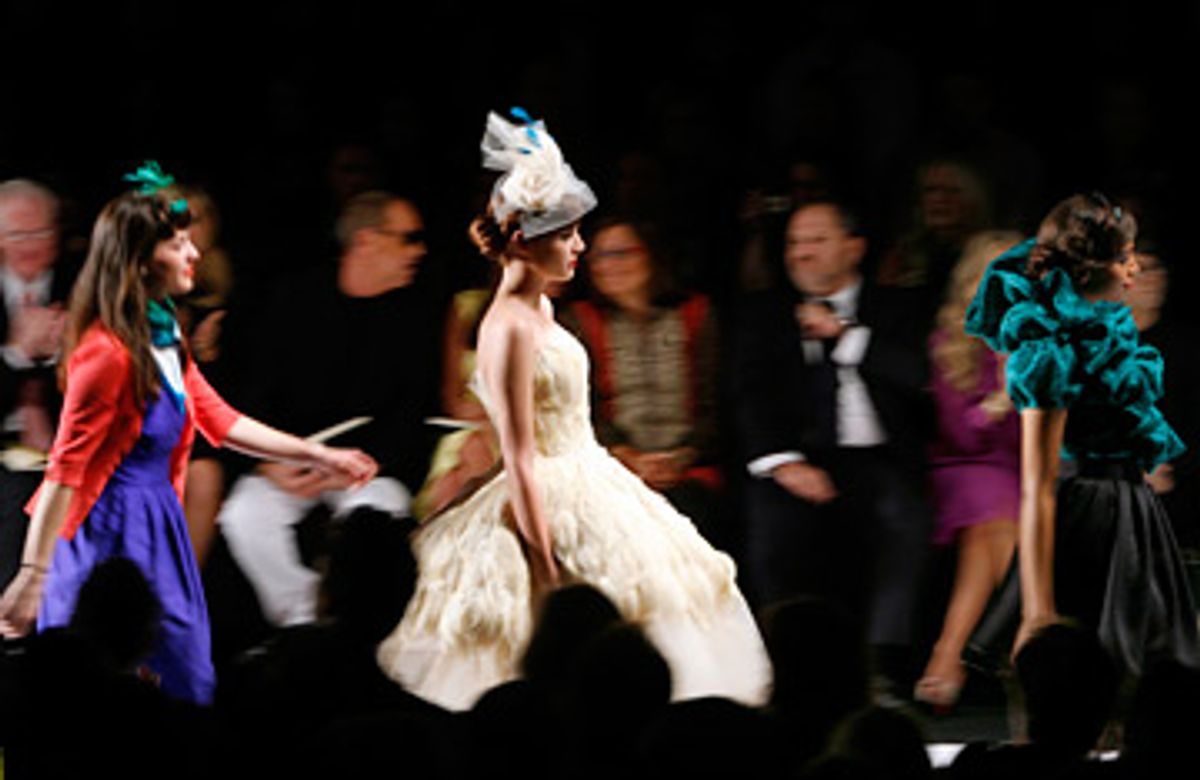 The hordes are piling into Bryant Park's main tent for the "Project Runway" finale. But this isn't your average New York Fashion Week event. The reality show rejects outnumber stylists and fashion magazine editors here by about 20-to-2 (the two being Nina Garcia, Marie Claire fashion director/"Project Runway" judge, and celebrity stylist Rachel Zoe, star of a brand new Bravo series). In fact, the place is something of a reality-TV cluster fuck -- or maybe, depending on your perspective, it's a little bit of heaven.

"Ohmygod, that's Rachel Zoe down there!" a voice shrieks behind me. "She's a hot mess. I need to get that picture." He holds up his phone, and then sighs contentedly. "That's going on my blogfeed and my Facebook page!"

Before and after the runway show, the stars of various Bravo series swarm up and down the runway giggling and posing and grabbing their own favorite TV icons. Tabatha from "Shear Genius" and "Tabatha's Salon Takeover" veers past "Top Chef's" Gail Simmons -- while inches away, platinum blond hipster Kit from last season's "Project Runway" spots Ronnie from "Make Me a Supermodel" and squeals with delight as they make each other's acquaintance. Posing with an endless string of fans, recent "Runway" castoff Blayne is as fake-tanned as ever but looks low-key in a black turtleneck -- surprising considering that he was eliminated last week for a Day-Glo monstrosity that caused Michael Kors to comment that it made the model look like she was "pooping fabric." Camera phones up and down the room are on constant alert as people capture unlikely collisions between former "Project Runway" contestants. I mean, what could last season's loopy Elisa Jimenez (who has a flower tattooed on her cleavage) possibly have to say to uptight architect Laura Bennett from Season 3?

Eventually host Heidi Klum arrives, thanking the execs at Bravo for five good years (the series is jumping over to Lifetime next season) and disappointing the crowd with the news that Jennifer Lopez backed out of being guest judge for this finale at the last minute due to a "foot injury." Instead, the show's resident sage Tim Gunn will be the fourth judge, and he promised the audience he would put his close relationships with the designers "on a metaphorical shelf."

I have a feeling that may not be too hard. The collections shown this season were either great or terrible -- with very little in between.

Six contestants sent their designs down the runway: Jerell, Suede, Joe, Kenley, Korto and Leanne. You can see snippets of all of them in our video, though it's likely that only four of those will make it to your TV screen. (In previous years the show has faked out Fashion Week audiences by including designers who are no longer in contention for the prize, because the episodes with their eliminations have not yet aired.)

Jerell jogs out first, giddy with excitement as he thanks his mother, sister, boyfriend and cousin. But nobody else seems all that giddy as his models strut down the runway festooned with the gawdiest dresses this side of Dollywood. Just about every outfit features sequins or ruffles, or some excessive combination of the two. One model wears a heavily sequined jacket over a transparent tunic over a striped dress, all tied together with a gold ribbon. Another is clad in a loosely constructed lavender dress that allows a clear side view of her breasts -- not the kind of cheap thrill "Project Runway" judges enjoy.

Up next is Suede, initially a favorite of mine, despite his bizarre trait of constantly referring to himself in the third person. His persona is kind of cartoon-punky, and he appears on the runway with a multicolored fauxhawk. But as soon as he opens his mouth, the cool veneer dissolves into saccharine. "I'm so blessed for this opportunity," he babbles, before giving props to online retailer and show sponsor Bluefly and then concluding, "Suede's going to rock it!"

I suppose it depends on your definition of "rocking it" -- but mine doesn't include pastel plaid gowns with puffy removable aprons, or pale turquoise dresses more suitable for a suburban teen prom than a runway. Worst of all is the clumpy pink and blue tutu, which bears a slight resemblance to the garment that got Blayne kicked off the show. Suede clearly has ignored Tim Gunn's longstanding advice to "edit, edit, edit." His collection is totally wackadoodle, as he himself would say.

Jerell and Suede have set the bar pretty low, which is lucky for the next designer, Joe. Poor Joe might be the most regular, uh, Joe ever to make it to "Project Runway's" Bryant Park shows. Though he's perfectly capable, I had forgotten that he was still around. (And I can't help noticing that the journalist next to me is jotting notes on Joe's designs under the generic moniker "Straight guy.") He announces that his collection is "American: western, motorcycles, rock 'n' roll." And indeed, out come models dressed in brown leather bodice and skintight jeans, or denim zip-up corset with skintight leather pants, or leather bodice paired with a red silk skirt -- all with a bombastic techno soundtrack to set the utterly confused and uninspired mood.

Kenley zips onto the runway next with green feathers poking out of her head. Although she was initially one of the darlings of the season, she has increasingly been framed as an obnoxious, gabby, self-satisfied creature. But on the runway it's all about the clothes, and Kenley quickly wins over the audience by sending out a black and fuchsia dress emblazoned with flowers that dips dramatically in back. It marks a spectacular change from the dispiriting collections of the previous three designers, as does a gracefully gothic black sheath whose long black feathers encircle its model's long neck. A few of Kenley's dresses feature the kind of bubble-shapes she misused on last week's failed avant-garde challenge. But her final gown -- a delicate ivory confection with a skirt made of feathers -- is gorgeous, harking back to the vintage couture that she loves to reference on the show.

I'm starting to get the feeling that designers have been sent out in reverse order of their chances of winning. Of course, the producers wouldn't tip their hands that way, but Korto and Leanne remain the season's most riveting competitors. Korto's green and gold clothes, inspired by Africa and Arkansas (she likes to remind us that she was a refugee from Liberia), are strong, bright and subtly innovative. If you've admired her work on the show, you'll like her collection well enough. The shapes feel unusual but wearable, slouchy and asymmetrical in all the right places. As we already know, Korto is a whiz with pleats -- often there are folds moving in multiple directions, but nothing looks overtly experimental or fussy. And when she brings her young daughter out to walk the runway with her models, the crowd audibly coos. Wearable clothes plus cute kid = serious audience appeal.

Last up is Leanne, a former graphic designer who jumped from selling her fashions online at Etsy to national fame on "Project Runway." A dead ringer for indie rock goddess Cat Power, Leanne seems to get lost on her way to the runway and comes stumbling out with rumpled hair, geeky glasses and a slightly sheepish grin. But there is nothing amateurish about her designs: Every piece is surprising and lovely. A structural white sleeveless blouse seems to hover in midair -- a cloud rather than a shirt. Blue leaves of fabric flutter gently on another blouse, balanced by tailored white pants. Skirts resemble Calder mobiles in their fluidity and complexity. It's the same style Leanne has been peddling all season, but it has come together as a perfect culmination of her work: a real collection. The audience cheers enthusiastically.

Wandering through the crowd later, almost everyone is buzzing, "Leanne or Korto?" That includes the rejected contestants, most of whom will admit to slight disappointment, but not bitterness. After all, an awful lot of designers have lost during the past five seasons, but I would argue that hardly anyone really loses on "Project Runway." The show's alumni have become part of a well-oiled machine, brought out at every Fashion Week to bask in the low-watt, not-quite-celebrity glare. And unlike the former contestants of "America's Next Model," most of whom disappear never to be heard from again (or even worse, cast members of "The Real World," many of whom put aside burgeoning career paths to make reality-show fame their profession), the people who appear on "Project Runway" are often wildly talented and do pretty well for themselves after the show ends, whether they win or not. Christian and Victorya both debuted collections at Fashion Week this year; Jay, Chloe and Laura have shown collections on QVC; Austin is the head designer of a bridal couture line; Kara Saun designs costumes for TV shows; and Jillian, Kara Janx, Nick, Jeffrey and Rami are still designing their own lines.

After the show I ask Keith (who was kicked off a few weeks ago) if he feels that Tim Gunn can be a fair judge for this final challenge. "He's such a good person ... but it's hard to say that you're not going to be biased when he's built such relationships with everyone. I feel as a mentor he tries to bond with us all on a professional level but I think you'd be kidding yourself if you didn't admit that you mesh with certain personalities and individuals more than others." When Keith was voted off the show, he whined and complained that he'd been treated unfairly. But standing here with the media whirling at his feet, he seems to have changed his mind. "You learn from it and do what you can with this platform they've created for us."