At her first solo campaign stop outside Alaska, Sarah Palin inspired Republicans to embrace her lock, stock and barrel. "She represents me." 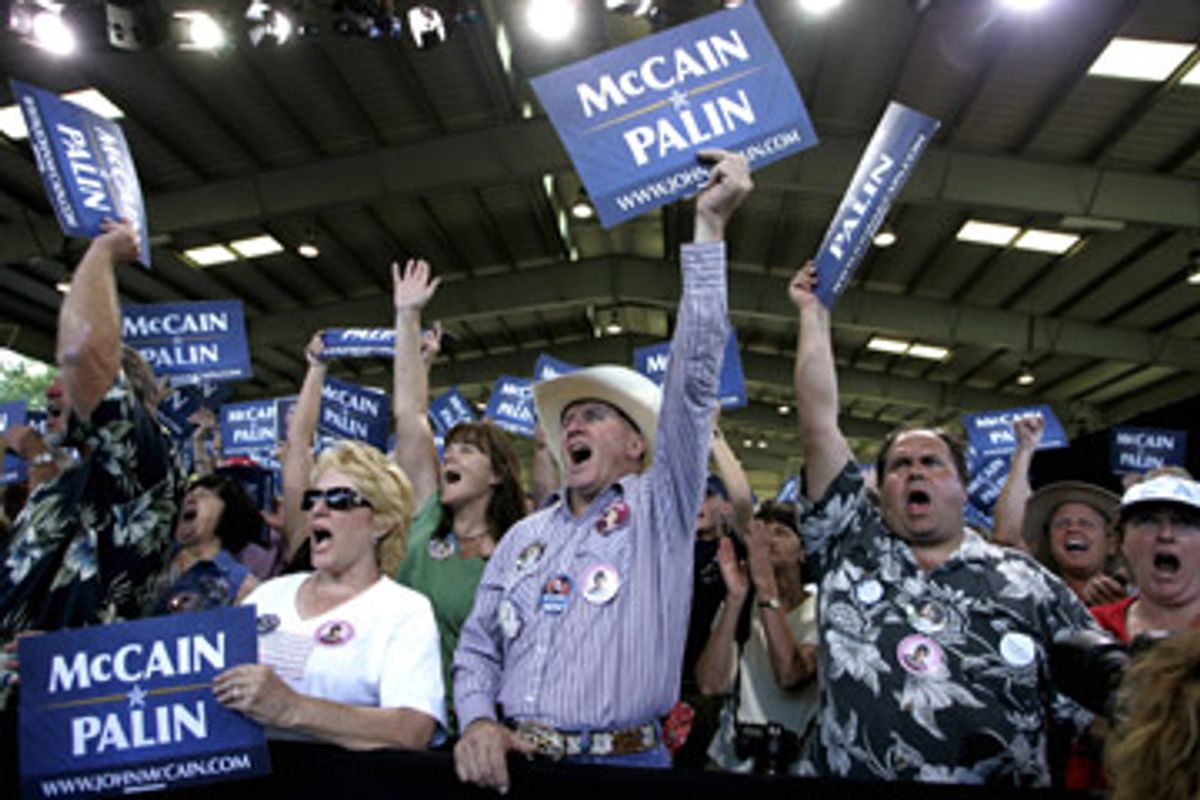 On Saturday, at her first solo campaign stop in the lower 48 as the GOP's vice-presidential candidate, Sarah Palin compared breaking the glass ceiling to breaking the sound barrier, while Chuck Yeager looked on with approval. To the handful of curious Democrats in the crowd, it may have seemed like they had fallen through the looking glass into a place where Palin can do no wrong.

Inside the open-air Pony Express Pavilion in Mills Park in the state's capital, Palin introduced Yeager, the American pilot who in 1947 became the first man to travel faster than the speed of sound, who was sitting in the audience among a capacity crowd of 3,500 euphoric Palin fans, among them recent John McCain converts. Yeager "is a true American hero, and maybe as the first man to break the sound barrier, hopefully, he has a good idea of how that first woman can break the glass ceiling once and for all," Palin said, inspiring screams from the crowd as she stood before a giant banner reading "Country First."

At the spirited rally, T-shirts depicted Palin as Rosie the Riveter with the iconic slogan, "We can do it!" and posters decreed "Read my lipstick!" One bumper sticker for sale offered the crude slogan: "I would immediately pull out of Nancy Pelosi." A lone sticker plastered on the concrete floor of the pavilion simply showed an unflattering head shot of Barack Obama with the word "Scary" written over it.

In her 20-minute stump speech, Palin reprised the greatest hits of her Republican National Convention speech. She presented herself as a reformer, insisting the "good old boy network of lobbyists" had no place in Alaska. She promised to end corruption in Washington, lower taxes and increase domestic drilling, inspiring chants of "drill, baby, drill" from the audience. She delivered her "thanks, but no thanks" riff about the Bridge to Nowhere, and the claim that she'd put the Alaska governor's jet up for sale on eBay. Never mind that these parts of her record have been debunked by news agencies and bloggers, as the Bridge to Nowhere was dead before she killed it, and that luxury jet didn't actually sell on eBay. Pledging that a McCain-Palin presidency would "shake up Washington" and "end corrupt practices," she drank in the adulation of her throngs of supporters, a sharp contrast from her discomfort last week fielding Charles Gibson's questions.

Some Palin rally-goers started lining up at 8 a.m. in the 90-plus degree heat to get into the 5 p.m. speech, which took place in a facility that hosts pickup roller hockey games, inspiring Palin to give a shout-out to her sister "hockey moms" in the crowd. In this capital city of 50,000, where even the local Safeway has slot machines, the pavilion stands just down the block from the El Mundo Latino Western Wear store. The overwhelmingly white crowd that gathered to see Palin speak included Boy Scouts, single moms, high school cheerleaders, retired oldsters and multigenerational families with infants and grandmothers in tow.

Recent polls show Nevada very much in play this November. In late August, a CNN/Time poll showed Obama up by 5 in Nevada. But a Rasmussen in early September showed McCain with a 3-point lead over Obama. An average of recent polls gives McCain a minuscule lead of just 1 point in Nevada.

Maybe a half-dozen Obama supporters stood outside the Pavilion with signs of dissent. One liberal California family -- mom, dad and a 9-year-old girl -- displayed grizzly images of butchered wolves, thanks to the governor's wolf policies. Inside, a buoyant Palin introduced her husband, Todd, as "Alaska's First Dude." Praising McCain's Iraq record, she invoked her son's recent deployment to Iraq. "As the mother of one of those troops, that's exactly the kind of man that I want as commander in chief," inspiring loud cheers.

But it was her patriotic riffs praising all other Americans, especially veterans, where Palin got her biggest responses. The audience delighted in her telling them just how special they are: "America is an exceptional country and you are exceptional Americans." She called for American pride: "You understand the need to put the pride back in America, and into Americans, because, we can do this again, we are an exceptional nation." Her nod to veterans inspired chants of "USA! USA!" The crowd also ate it up when she made a veiled swipe at Michelle Obama, when she said that McCain is, "like you, like me, always proud to be an American."

It was clear that Palin didn't have to convince the rally-goers that she was the candidate for them. The audience seemed more excited about her than presidential candidate John McCain. Many supporters said that they'd been lukewarm about McCain, or supported other candidates in the primaries, but were thrilled about Palin as the veep running mate. Attending the rally was a chance to see their "shero" in the flesh.

Many in the audience stressed that they're excited about Palin for the very reasons that they perceive the "liberal media" to be gunning for her. They share her adamant antiabortion and pro-gun views but it's her personality that has them fired up. Palin's from a small town, a small state and part of a big family. Plus, she's a graduate of a state school rather than "Harvard or Yale," as one Nevada rally-goer said.

"She represents me. She's real. She represents real people," said flight attendant Charlene Bybee, 54, of Sparks, Nev., who wore a black T-shirt with the slogans "I am Sarah Palin" and "Real Women for McCain." Bybee is a self-described "security mom" who has two sons, ages 20 and 24, and was once the runner-up "Miss Nevada." She said she identifies with Palin as a former PTA mom and one-time beauty queen. Bybee, who has been an active Republican volunteer in the past was tepid about McCain's candidacy. But she's so energized by Palin that she's now volunteering for the campaign. "You shouldn't have to be from a major American city to represent most Americans," she said.

Laura Tracy, 27, an unemployed barista from Yerington, Nev., held a sign that read "Hunter Chicks 4 Palin" on one side, and "Sarah Killed My Apathy" with a drawing of a deer rifle and a target on the other. Tracy, who had supported Mitt Romney in the primary, said that she cried the day of Palin's acceptance speech. "I think that it's great that the American people finally have a candidate who they can relate to, with morals," said Tracy, who said the issues she cares the most about are pro-life and the right to bear arms.

Deaun Parker, a 41-year-old single mother of five living in Carson City, who works full-time in workers comp insurance, attended the rally with her 16-year-old daughter Erica, and 12-year-old son Justin, a Boy Scout. "I think that she is a terrific role model for my daughter. She's a role model for me," said Parker, who supported Romney in the primary. Parker described her family as among the "working poor," and said she doesn't want a Democratic administration, which would bring universal health insurance, because she says she doesn't want to pay the taxes for it.

But it was hardly just the women in Nevada who said they identified with the GOP's veep candidate. Men were crazy about her too.

Sloan Venables, 41, who works for a software engineering company in Reno, and lives in Virginia City Highlands, Nev., who was holding his 14-month-old daughter Savannah at the rally, said, "She's like me," noting that Palin's from a small town, and a big family, and a member of the NRA. His top issue: independence from foreign oil from the likes of Venezuela and the Middle East. And while he sees drilling domestically as only a temporary solution, he said it's a necessary one.

Ron Brandow, 67, from Houston, semi-retired from the school fundraising business, said he'd never been to a political rally before. Yet he had to come out to see Palin from his vacation home in nearby South Lake Tahoe, since she's the first "common person" he's seen rise to this level in politics. "I love her. Everyone can identify with her -- a working person."

A number of supporters decried Palin's treatment by the mainstream media, especially the recent interview with Charles Gibson, which one Palinophile called "an interrogation." Ronald Karkela, an insurance executive from Casper, Wyo., said that he thought that Gibson made "a fool of himself, because of his snobbish, professorial attitude" when he interviewed the governor last week. The mainstream media "doesn't understand that Palin represents the vast majority. She represents fly-over America," he declared.

It's not every day that you hear a retired Republican Marine Corps pilot and LAPD homicide detective reverently invoke the names of Gloria Steinem and Bella Abzug. But Bob Lee, 73, of Reno, praised Palin as "the epitome of everything that I used to see Gloria [Steinem] and Bella Abzug promoting -- American women can be all things." He noted, "Sarah didn't make it on the coattails of her husband. Hillary [Clinton] rode the coattails of Bill." Lee had a phrase for the excitement that Palin invokes in conservatives, exemplified by the throngs trying to shake Palin's hand, take her photo or have her autograph their cowboy hats or baseball caps, just behind him: "I refer to it as Palin pandemonium," he said.

Mindy Southard, 52, a housewife, mother of five and dog-breeder, called Palin's address "electric." Southard said her top issues are pro-life and opposition to same-sex marriage. She admitted that she wasn't sure if she was going to vote for McCain or Obama until Palin joined the ticket. "I really do think that we have a candidate who is for the people," she said.

Lucy Wu, 75, of Reno, who was attending the first political rally of her life, wore a rhinestone American flag pin and a "Women for Palin, You go girl!" pink button. She called Palin's speech "wonderful! Isn't she inspiring?" Laura Gremepel, a 29-year-old stay-at-home mother from Reno, who held her 9-month-old daughter, agreed. "She was very inspiring." Gremepel described her baby as a "Republican in training," adding, "I can't wait to vote."