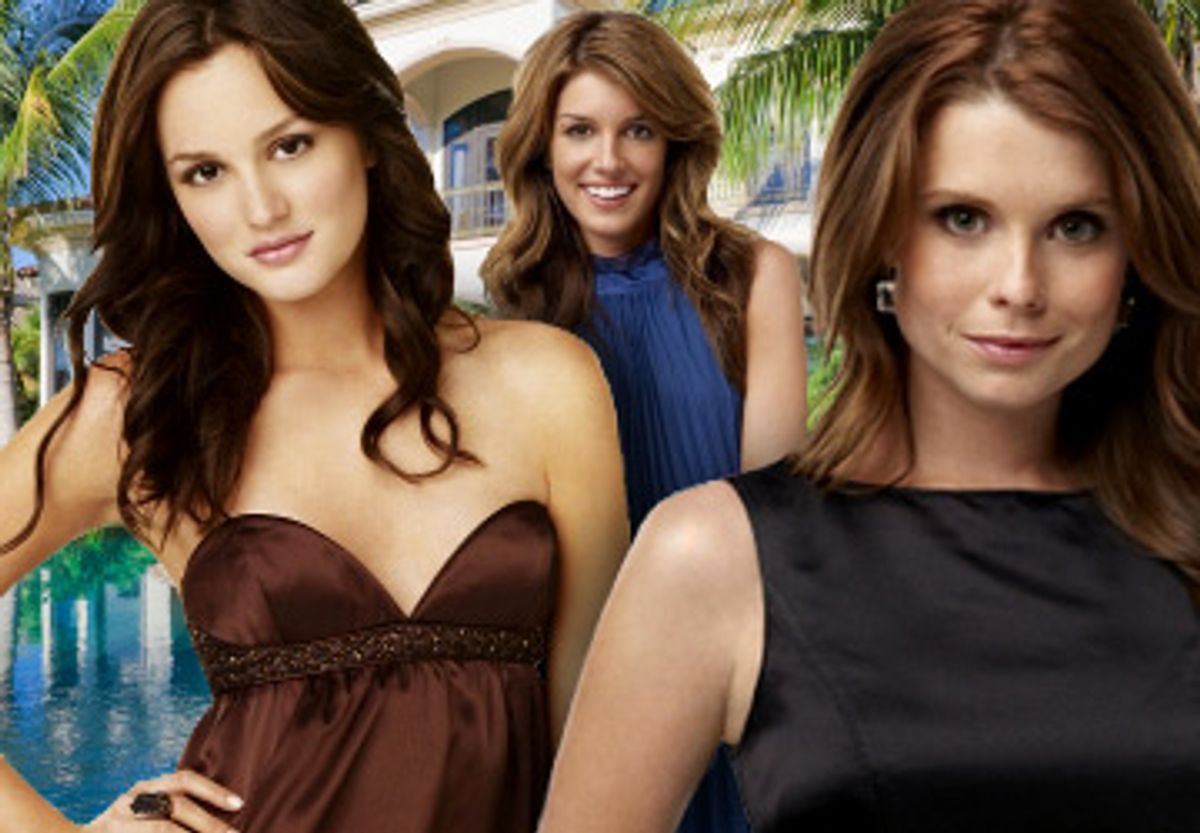 Designer dresses, cocktails at the most exclusive clubs, hot-stone massages, personal tutors, dates on private jets: CW teen dramas "Privileged," "90210" and "Gossip Girl" make aspiring to own designer jeans and nice cars look hopelessly middle-class, compared to the fully serviced, spa-polished, couture lives of the truly wealthy. As our country abandons its middle-class roots to become a nation of very rich and very poor, our television screens reflect this shift in the Armani-clad Manhattan prep school teens of "Gossip Girl," the mansion-dwelling twins of "Privileged" and the original spoiled teens of "90210," reimagined as painfully skinny model-gorgeous mean girls, earnest bad boys and heartthrobs with wonderful manners who throw money around like young sultans.

Escapist fantasy TV looms on the small screen whenever times are tough, from "Dallas" to "Dynasty" to the sunny, post-9/11 California dreamin' of "The OC." But even though the CW's latest offerings are casually thrown into the same whimsical pile, even though there is always the working-class or middle-class outsider like Ryan ("The OC"), Brenda ("90210") or Jenni ("Gossip Girl"), whose ordinary upbringing is ample justification for rejection by the aristocratic thugs, the morals to these stories aren't as clear as they once were. When Sue Ellen drowned her sorrows in a bottle of vodka or Lucy popped prescription pills and slept around and a grinning J.R. screwed over his closest friends on "Dallas," we were meant to pity these lost, soulless, trashy people, squabbling in their enormous but somehow claustrophobic mansions. On "Dynasty," even saintly outsider Krystal could never quite shake free from Blake's workaholic, profit-obsessed ways or his meddling, troubled kids, and she certainly wasn't above the occasional blouse-ripping fisticuffs with Alexis in the pool.

While Chuck, the poor little prince of "Gossip Girl," may pace and swill fine bourbon in his lonely hotel room at the Palace, while Blair nibbles on chocolates in the fluffy confines of her four-poster bed and laments that "Lady Godiva" is her only friend, these are rare low moments in otherwise fabulous, fun-filled lives that include glamorous parties in the Hamptons, dinner out at the best restaurants every night and a phalanx of handmaidens who quietly fulfill every whim. From the warmhearted, loving, McMansion dwellers Sandy and Kirsten of "The OC" to the spunky, good-natured grandmother lounging about in her Mediterranean-style villa on "90210," the filthy rich aren't the cartoonish demons they once were, and the benefits of their exorbitant lifestyles are paraded before our eyes at every turn. TV writers have abandoned the notion that heart and spirit might win out over money in the end, instead choosing to show us just how many things money can buy.

Ogling over all that cash seems to take precedence over crafting interesting characters or a compelling story line this season. On the CW's (Does that stand for "Coveting Wealth"?) two new dramas, "Privileged" and "90210," we're treated to essentially the same plucky young heroine with shiny hair, doll eyes and the saccharine affectations of a middle-aged real-estate agent. Both Megan (of "Privileged") and Annie (of "90210") may be portrayed as self-doubting outsiders, but their big, pretty eyes, tiny bodies and bleached-white grins make them effortlessly acceptable impostors at the country club. Not surprisingly, each girl has plenty of allies and not one but two handsome guys gasping and drooling in her wake by the end of the first episode. These two feel about as out of place among the rich and fabulous as a hungry dog at a squirrel fat camp.

Where are the dangerously odd outcasts who reject the trappings of wealth completely, stubbornly insisting on defining themselves on their own terms? "90210's" Erin puts up a good fight with her punk hairstyles and scathing animated blogisodes, but wipe away the purple mascara and you find another bony fashion model underneath who's still smarting from being betrayed by her former ultra-popular best friend Naomi. "Gossip Girl's" Jenni has shown glimmers of outsider spirit with her home-sewn, funky fashions, and we're meant to believe that her dad, Rufus, is the ultimate in cool, with his rustic loft and his work at an art gallery and his best-of-the-'80s band. But rarely does that "Pretty in Pink" moment completely win out against a backdrop of head-spinning wealth. More typically, we see Jenni's good-guy brother, Dan, humiliated for saying the wrong thing at an hors d'oeuvres tasting, or cringe as Jenni hems and haws over the money she owes her rich friends for some pricey dinner outing the night before. Ultimately, Jenni is driven to steal a dress from her friend's mother's closet, Dan has to borrow a white linen suit for a white party in the Hamptons, and Annie accepts the gift of an expensive dress from her brand new frienemy, Naomi, without a fight. Kids without money demean themselves to keep up appearances, over and over again, while the rich kids blithely move through the world perfectly coiffed and dressed to the nines, fussing over the latest bit of trivia to pop up on their rhinestone-encrusted T-Mobiles.

The wealthy kids even have academic advantages. Rich twins Rose and Sage of "Privileged" are tutored by our heroine Megan on upcoming lessons at school to insure that they'll both get into Duke. And the night before the SATs, "Gossip Girl's" Blair invites everyone over for massages, pedicures and a study session with private tutors. "How do you compete with that?" our plucky upper-middle-class heroes and heroines wonder out loud, and the answer is clear: You don't.

We're also shown repeatedly what a disadvantage it is not to be able to rub shoulders with the elite. On the first episode of the second season of "Gossip Girl," Jenni discovers this important lesson when her fashion-designer boss insults her publicly, then gains respect for her and calls her by her first name for the first time after spotting her at an exclusive party. And in the waning moments of "Privileged," Megan blows off a heated exchange with her charge, Sage, when her employer takes her by the arm at a big party, vowing to introduce her to lots of movers and shakers, proclaiming triumphantly, "Palm Beach society awaits!"

So the escapist fantasy behind the trumpets of "Dynasty" and ranch lands of "Dallas" gives way to a far less jaundiced vision of life among the wealthy. Instead of providing a dreamy, temporary exit from mundane life while demonstrating that the wealthy are just as troubled as the rest of us, the CW's teen shows demonstrate very clearly the fundamental advantages of aristocratic living. This isn't about catching a glimpse inside these magnificent spaces or getting an amusing glance at the silly excesses of a select few living in Manhattan or Palm Beach or Beverly Hills. This is an extended tour through the many concrete benefits and perks of life among the very rich.

Can these dramas -- which are made for young people, after all -- really be written off as harmless fun when so many of us aspire to throw money around like young barons and dukes with demonstrably tragic consequences for the entire country? As a growing percentage of families lose their homes and taxpayers are forced to foot the bill for the mortgage industry's indiscretions, while millionaire executives and private investors remain unscathed, should we feel so comfortable celebrating the growing divide between the haves and have-nots?

When a room full of older, Asian women are massaging the backs and painting the toenails of a bunch of rich teenagers at their eve-of-the-SATs party on "Gossip Girl" or a young girl flies up to San Francisco on a private jet on her first date with a stranger on "90210," that's not merely fantasy, it's a perverse consumerist fable for young people, built on the notion that money provides the only sure escape from tension, stress and impending challenges.

Why can't we tell our kids the story of a resourceful, clever teenager living with her single parent in a run-down apartment? She could be a smart, crafty, sharp-tongued heroine who's charismatic and wise enough to put the shallow rich kids in their place. Wouldn't it be refreshing to encounter a heroine who didn't need favors or loans or the kindness of rich strangers to get by?

Wait! There was a show like that. "Veronica Mars." The CW canceled it after three seasons.