The Wall Street meltdown -- and you

Lehman, AIG, WaMu, Merrill Lynch -- the fur is flying in financial markets. What does it mean for you and me? 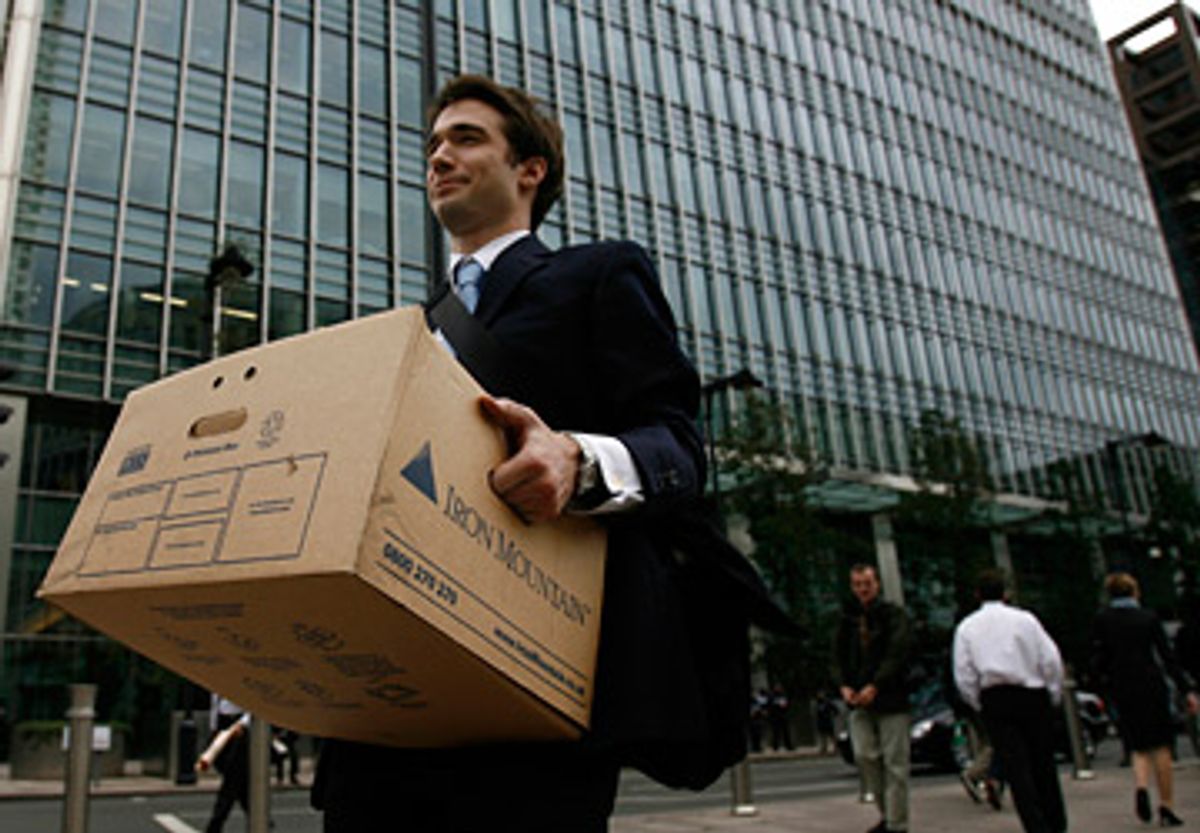 What does the liquidation of Lehman Brothers portend for my 401K? Do Washington Mutual's troubles mean I should close out my checking account? Why should I care if the insurance company AIG is being forced to sell off its airline leasing business to raise cash? And if the unwillingness expressed by Treasury Secretary Hank Paulson at coming to the aid of Lehman this weekend means that the Feds are finally getting tough and saying no more bailouts, what does that mean for me, for my job, my retirement, and my children's college education?

No matter where the Dow Jones Industrial Average ends up at the end of Monday, those are the kinds of questions that Americans are asking right now, as they digest the wild news from Wall Street. As a general rule, the majority of us probably pay less attention to the ups and downs of an investment bank's share price than we do to our favorite sports team's chances of making the playoffs or who is going to be America's next top model. But the explosion of dire business headlines this past weekend has a way of focusing the mind.

The honest answer is that no one really knows how this will play out -- the brightest minds in government and finance are as befuddled as the rest of us by the systemic crisis currently gripping financial markets. The very speed with which mighty pillars of the financial system can crumble into dust -- Bear Stearns, Lehman, Countrywide -- means all prognostications are at risk of becoming out-of-date by the time a period is placed at the end of a prediction.

But there are some ways to track the chains of connection, and not just from a Lehman or WaMu to us, but from us back to them. If ever the bogus distinction between Wall Street and Main Street actually made sense, it certainly doesn't now. We are all in this together -- and the woes of the soon-to-be out-of-work Lehman broker are our sorrows too.

Lehman offers a good starting point. Lehman's liquidation promises to be the biggest bankruptcy in history, clobbering Worldcom's in 2002 and Drexel Burnham Lambert's in 1990. If you own shares in a mutual fund that owns Lehman's bonds, you are going to get, as they like to say on the Street, "a haircut." One Bloomberg news story quotes an analyst as saying that "Lehman bondholders may get about 60 cents on the dollar if the investment bank is forced into liquidation." Another reports that, between them, Pimco, Vanguard and Franklin Advisers "may face losses of at least $86 billion stemming from the collapse of Lehman Brothers Holdings Inc." The country will be poorer as a result of a Lehman liquidation.

What about Washington Mutual? The Financial Times published an alarming story on Monday describing the potential impact of a WaMu bankruptcy. Only half of WaMu's $307 billion in assets are insured by the U.S. Federal Deposit Insurance Corp. Nationwide, some 64 percent of the United States $7,000 billion worth of deposits is insured, leaving $2,500 billion uninsured. "If a high-profile failure causes these uninsured deposits to shift abruptly in a flight to safety, it could be highly destabilizing for the banking system."

In other words, the entire banking system might be thrown into chaos if WaMu fails, raising the possibility that the federal government might have to backstop all U.S. deposits to prevent a total meltdown. No matter who gets elected president in November, it's hard to see how a commitment of that size could be made without serious tax implications for every American, either now or down the line.

On the other hand, there may be good reason for the insured WaMu depositor not to panic. One of the stories lost amid the fuss over the weekend was the rumor that WaMu had rebuffed a buyout offer from J.P. Morgan Chase. The theory is that J.P. Morgan is salivating at the prospect of gobbling up WaMu's lucrative retail branches with its hundreds of billions of dollars of deposits. WaMu depositors should be heartened by that news, for not only does it suggest that WaMu is confident enough in its own chances for survival that it is willing to turn down potential suitors, but it holds out the hope that should affairs deteriorate, WaMu depositors will soon be customers of a different, even bigger bank.

As for the American International Group (AIG), it seems pretty clear that in addition to its souring business selling insurance against bond defaults, another precipitating factor for its own problems is the likelihood of billions of dollars of losses attributable to Hurricane Ike. Looking forward, that can only mean higher premiums for insuring homes and businesses, whether AIG survives or not. The insurance industry had barely recovered from Katrina and Rita in 2005. The numbers aren't in on Ike, but it will surely be one of the most expensive natural disasters in American history.

Spiraling out from these immediate effects -- portfolios weakening in value, insurance costs rising, potential bank failures -- there are also longer-term problems. The one thread tying all the pieces of this meltdown together is that there suddenly doesn't seem to be enough capital to go around to keep the entire financial system properly lubricated. The Fed is doing everything it can to extend credit, and every private-equity fund and sovereign wealth fund within shouting distance is being besieged with requests for aid, but the upshot is that the cost of raising capital is shooting up, and the cost of insuring against defaults is skyrocketing. There is less credit to go around for the big boys, which ultimately means less to go around for everyone else -- it will be harder for small businesses to get loans, and more expensive for individuals to buy houses or cars. Consumer spending is already in decline. This latest explosion of uncertainty on Wall Street will increase the pressures on our individual bottom lines already exerted by a slowing economy.

But now let's turn it around. There's another fascinating thread linking together all of this weekend's big stories, and it has to do with the roots of the crisis in the great mortgage lending boom of the not-so-distant past.

A stunning factoid from a Bloomberg report on WaMu: "One-third of borrowers who bought their homes in the past five years now owe more on their mortgages than their properties are worth, real estate valuation Web site Zillow.com said." This is partly due to falling home prices but also to the popularity of payment-optional adjustable rate mortgages, the so-called Option ARM Mortgages that allowed users to deduct portions of the monthly payment due and add it to the principal -- with the result being that the outstanding loan balance often grew instead of fell. In the second quarter of 2007 Washington Mutual held $52.9 billion of Option ARM Mortgages on its books.

Who was the one of the biggest players in the country in exotic mortgages? Washington Mutual. The company is now paying the price.

Which investment bank bet most heavily on mortgage-backed securities built out of pools of subprime and other exotic mortgage loans? Lehman Brothers. The company is now paying the price.

Which insurance company was one of the biggest players in selling insurance protecting against the default of pools of mortgage-backed securities? American International Group. The company is now paying the price.

Millions of Americans bought houses they could not afford. But they do not deserve all of the blame. They were aided and abetted and encouraged and seduced by mortgage lenders and investment bankers. They were told the exotic mortgage products were a good idea by their own central banker, Alan Greenspan. They were served badly by regulators and politicians -- the kind of people who, even today, are saying "the fundamentals of our economy are strong" when, in fact, nothing could be farther from the truth.

When an entire nation goes on an unsustainable spending spree, that is a clear sign that something is fundamentally out of whack -- on Main Street and Wall Street.