Who deserves a taxpayer bailout?

Why Bear Stearns and Fannie/Freddie, but not Lehman? And what about the monster in the closet, AIG? 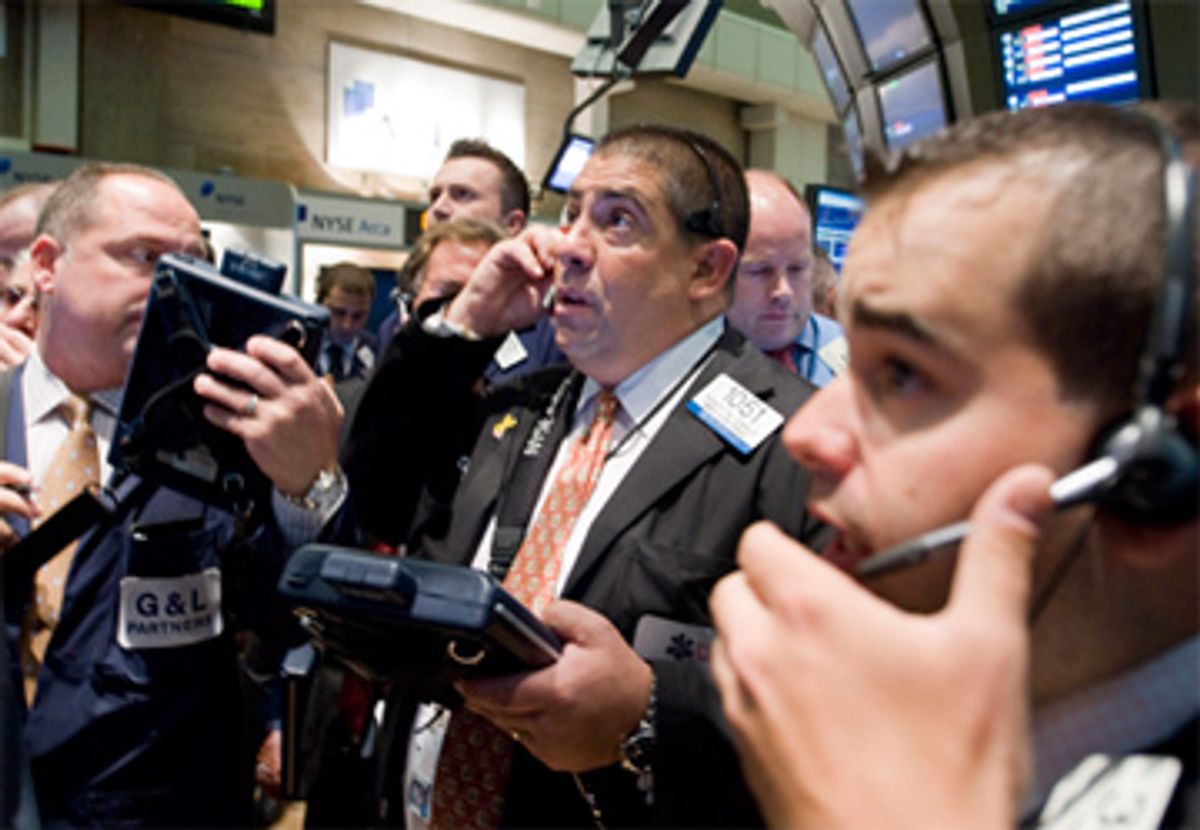 Lehman Brothers is now yesterday's news. On Tuesday morning, the attention of Wall Street fixated on the fate of the colossal insurance company American International Group (AIG) a company neck deep in derivative credit insurance products that are blowing up left and right.

AIG says it needs $75 billion to keep going, and the Treasury is strongly encouraging Goldman Sachs and JPMorgan Chase to lend the company the money. Meanwhile, New York Gov. David Paterson has already authorized AIG to borrow up to $20 billion from its subsidiaries -- which by law have to maintain large asset bases to be able to pay off insurance claims -- to staunch the bleeding in the division that handles exotic financial products, such as credit derivatives.

But the question still hangs in the balance -- what if Goldman and JPMorgan can't or won't come up with the cash? They've got their own problems: After Goldman's share price dropped 12 percent on Monday, the investment bank announced a 70 percent decline in net profits for the most recent fiscal quarter. So how much leverage does Hank Paulson have? AIG's entanglement in the crisis -- its exposure to corporate defaults and mortgage-backed securities gone bad -- is immense. Despite the tough talk from Paulson, a bailout is not off the table.

Which brings us to John McCain. On Monday, his campaign released this official statement:

The crisis in our financial markets has taken an enormous toll on our economy and the American people -- first the decline of our housing markets followed by the collapse of Bear Stearns, Fannie Mae, Freddie Mac and now Lehman Brothers. I am glad to see that the Federal Reserve and the Treasury Department have said no to using taxpayer money to bailout Lehman Brothers, a position I have spoken about throughout this campaign.

Let's unpack that last sentence. John McCain is happy to see that no taxpayer is going to bail out Lehman, which implies that he was unhappy at the bailouts of Fannie/Freddie and Bear Stearns. However, despite his tough talk, he did not oppose those bailouts. On the occasion of the Bear Stearns rescue, he noted that when "systemic risk" threatens, bailouts are OK.

Let's be clear here: The decision not to come to the rescue of Lehman Brothers has little to do with ideological positions on taxpayer money. In a perfect world, no administration, Democratic or Republican, wants to spend billions of dollars keeping an investment bank, government-sponsored enterprise (GSE) or insurance company afloat. The question always is, what's the alternative?

Fannie and Freddie -- responsible for $5.2 trillion worth of mortgage loans -- were and are the epitome of "too big to fail." Just the fact that Chinese state-owned banks owned billions of dollars of Fannie and Freddie bonds made it impossible to let the GSEs fail without incurring disastrous international repercussions. As Paulson said at the time: "Fannie Mae and Freddie Mac are so large and so interwoven in our financial system that a failure of either of them would cause great turmoil in our financial markets here at home and around the globe."

As for Bear Stearns? Ken Houghton at Angry Bear made an astute observation during the turmoil yesterday that delineated a key difference between Bear Stearns and Lehman Brothers. Lehman, he says, "has no clearing business" -- in other words, it is not significantly involved in the turbo-powered bookkeeping business of ensuring buyers and sellers live up to the obligations of their trades. If Bear Stearns had declared bankruptcy, writes Houghton:

... About 30 percent of the hedge funds in the country would not have been able to execute virtually any transaction for the following thirty days. Not a payment. Not a redemption. Not a trade on a listed exchange. Not a receipt. Not a de-leveraging. Not a swap payment, not a CDS payment, not fulfilling an option exercised against them.

There's not just a "maybe" about financial collapse in such a scenario.

Which brings us back to AIG, one of the largest insurance companies in the world, a company described Monday by the Financial Times as sitting "at the heart of the financial system." McCain can make all the solemn vows of fealty to taxpayer money he wants -- but if he were president, I'll bet he would end up making the exact same decision that the Bush administration will likely make, one way or another: AIG cannot fail.